Centuries ago, sailors on long voyages suffered from scurvy caused by vitamin C deficiency because they had no access to fresh fruits and vegetables.

The nightmare at sea was eventually resolved by taking on board foods packed with vitamin C, like lime and lemon juices, oranges and even sauerkraut.

Most people today remember to eat daily helpings of fruits and veggies amid a general public awareness of vitamin C.

But other vitamins, like the B vitamin complex, are less understood and often overlooked.

In our heavily polluted environment, the B vitamins deserve more attention.

Researchers at Hong Kong City University and Harvard’s T. H. Chan School of Public Health recently published a new study in the science journal PNAS on how vitamin B supplements may help to mitigate the effects of air pollution, particularly the PM2.5 pollutant.

The B vitamins play vital roles in keeping our bodies healthy and in good shape, helping with metabolism, reducing stress, converting food into energy and strengthening the immune system.

And because Chinese cuisine can virtually turn anything into a tasty stir-fry, cooking food rich in B vitamins is easy and flavorful.

Animal liver is rich in B vitamins. In the US Department of Agriculture’s National Nutrient Database, it’s among the top-ranked foods for vitamin B12. But liver is one of those love-it-or-hate-it foods.

Many people don’t like the squishy texture and strong smell of raw beef, pork or lamb livers. And cooking liver to perfection can be tricky for those who do like it.

With fresh livers, it’s best to rinse them thoroughly with running water and then soak in water for 30 minutes to an hour, changing water several times until there is no blood residue. After cutting the liver in slices, rinse again to remove the powdery texture on the surface, and soak in water again if needed.

Some people add one or two tablespoons of white vinegar to the water because the acidity can improve liver’s texture.

In Chinese cuisine, livers are generally cooked with either heavy spices or scallions, using strong flavors to trump strong smells.

Pork liver is widely eaten across China. One of the most notable methods of cooking is wok-fried pork liver slices. It uses thin slices of fresh pork liver that have been marinated in soy sauce, cooking wine and cornstarch before being tossed on high heat with Beijing scallions, green peppers and garlic or garlic sprouts. The dish is seasoned with soy sauce.

Timing is crucial. The liver shouldn’t be undercooked or overcooked, so it’s important to use a high heat and a short cooking time.

For an easy cold starter dish, prepare a pot of water and add cooking wine and ginger slices. Then cook a whole pork liver and let it cool in the broth to retain the moisture. Before serving, cut the liver into thin slices and serve with a dipping sauce of garlic paste, vinegar, light soy sauce, sesame oil and hint of chili oil. The leftover liver should also be kept in the broth so it wouldn’t go dry and powdery.

The whole liver can also be cooked in a rich broth seasoned with spices like cinnamon, star anise and Sichuan peppercorns. 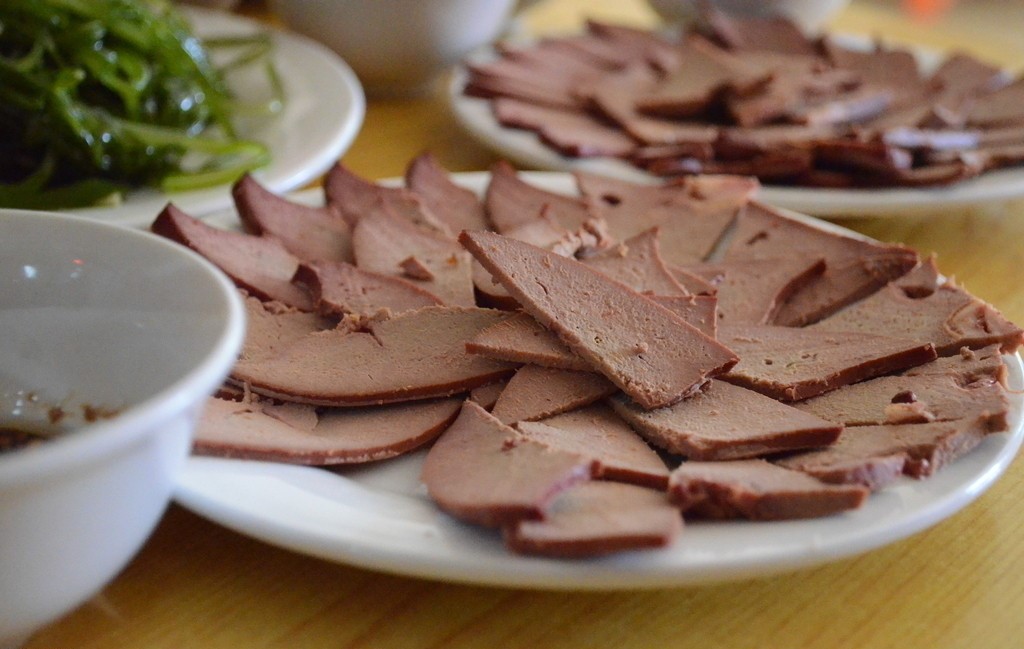 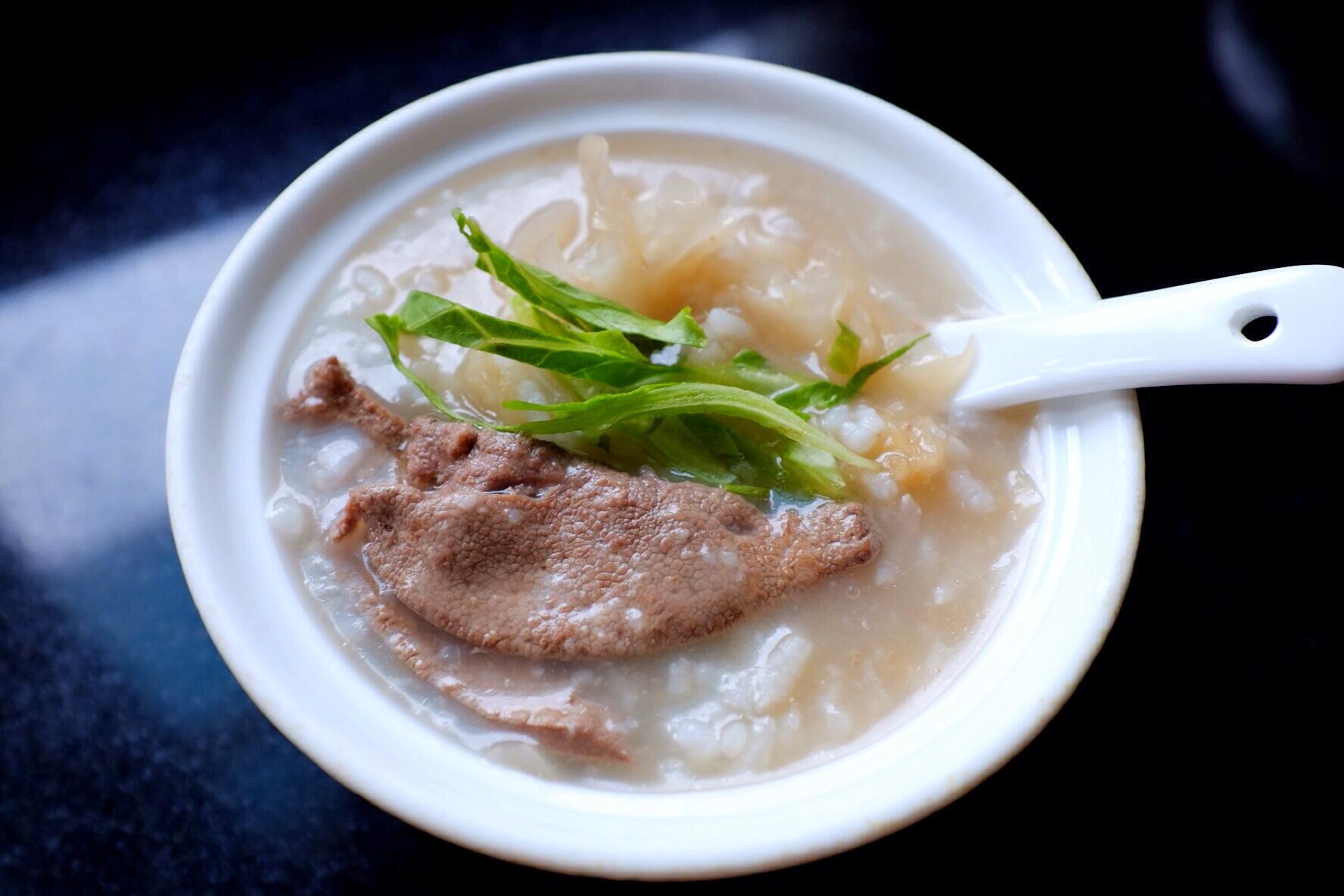 Pork liver and spinach soup is a dish parents often make for children because both ingredients are rich in nutrients, like vitamin B12, iron and zinc.

Beef liver contains more vitamin B12 than its pork equivalent, but its flavor is a little stronger. Chicken livers are softer, tenderer and less odoriferous, while lamb liver has a strong smell and requires more soaking.

Pork and lamb livers are traditionally used in baby food because of their high level of nutrients and easy digestion. The fresh livers are cleaned and boiled before being turned to paste in a food processor. The mush can be frozen for later use.

Some families prefer liver paste in powder form, adding small amounts to baby food. To make it, slices of fresh liver are washed, boiled and fried in a dry pan to remove moisture, then crushed to a powder in a food processor before drying once again in a pan.

Cereals, whole grains and beans can provide vitamins B1, B2, B3 and B6.

In Western cuisine, products like the high-fiber, low-sugar cereal biscuits, breakfast cereals and oatmeal are efficient sources for getting enough B vitamins into the diet.

In Chinese cuisine, the answer is congee.

Healthy cereals and grains like pearl barley, buckwheat, red rice, oats, millet, black glutinous rice and brown rice, and legumes like red, black, kidney and mung beans are thrown in water and cooked in a pressure cooker to make the sticky and fragrant congee. Sometimes peanuts and walnuts are also added.

Pressure cooking or even slow cooking softens the texture of the rough grains and beans. Ingredients such as yams, sweet potatoes or purple sweet potatoes, raisins and jujube can also be added to make sweeter versions of the nutrient booster.

Beans and grains can also be added to the everyday staple of steamed rice for extra nutritional value. 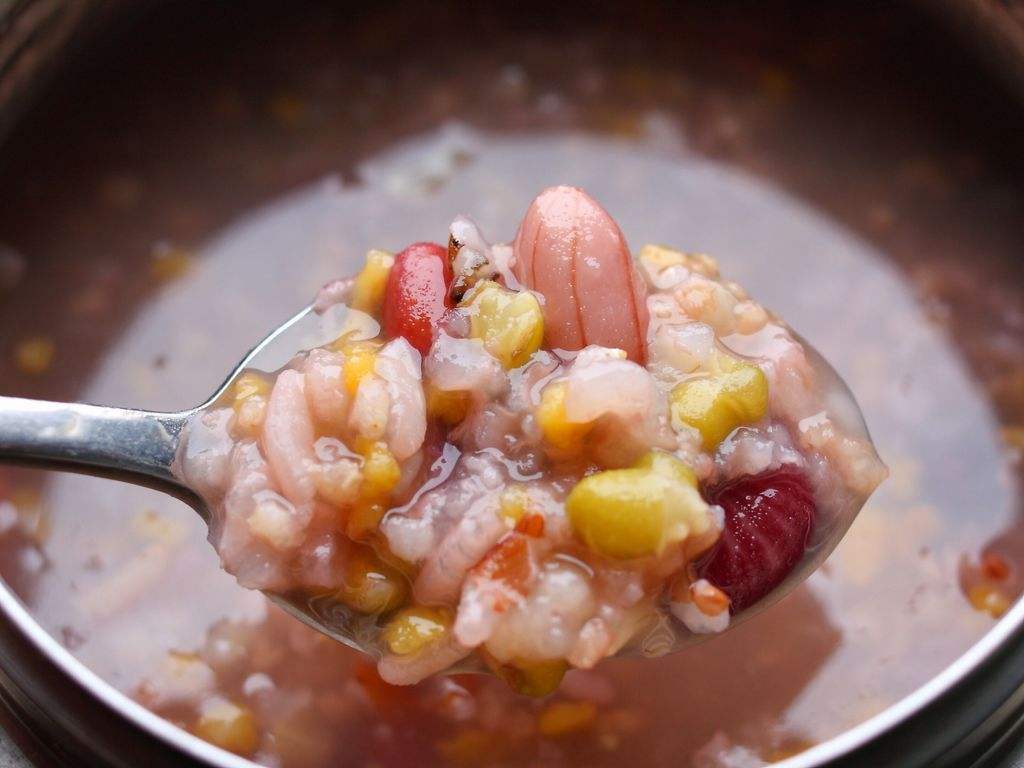 A healthy congee that contains cereals, grains, beans and nuts.

Wotou (窝头), a kind of steamed bun made of corn or sorghum, was once regarded as poor people’s food, with the rich preferring more refined wheat flour. But now, it’s the other way around.

Steamed buns made with cereal and grain flours rather than pure wheat flour are considered healthier because of their content of nutrients and fiber. People have also come to appreciate the chewy texture and fragrance of grains.

These healthy buns are made by mixing whole-wheat flour, buckwheat flour, black bean powder, black rice flour and soybean powder into a dough, adding yeast and warm water before kneading, and then shaping the dough into small buns.

Cereals, grains and beans should be consumed in moderation to avoid making the stomach feel too “loaded.” 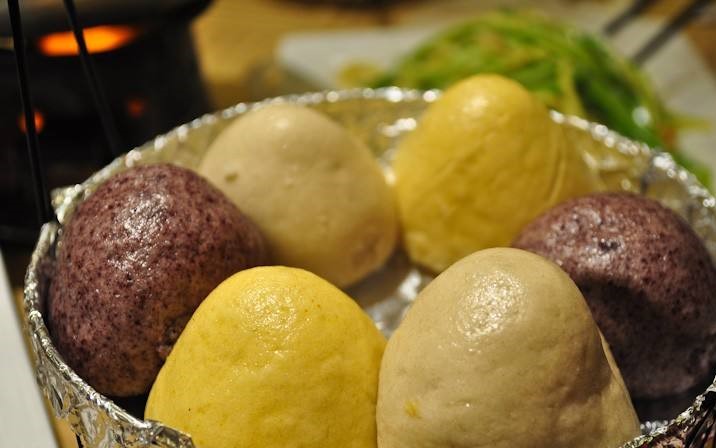