Editor's note: This is a series profiling the Chinese lifestyle and the people’s way of eating and drinking through literary texts, from the four great classical novels to ancient recipe books.

In “Journey to the West,” when monk Xuanzang and his disciples embarked on their legendary pilgrimage, they carried bo, begging bowls, for vegetarian food.

Along the way, they found themselves in quite a bit of trouble when begging for food, a dangerous action considering they wouldn’t know who or what was behind closed doors.

When Xuanzang went to beg for food at a thatched cottage, the women there were actually Spider Demons.

While three of the women kept him company, the other four went into the kitchen to prepare a horrifying meal. They were cooking human flesh, stewed as if it were wheat gluten, and human brains cut like pieces of bean curd.

As soon as the monk smelled the stench of flesh, he grew suspicious and tried to leave, but the demons trapped him in a spider’s web.

But the Monkey King defeated the Spider Demons and Xuanzang was released.

In the Lion Camel Cave there lived three demon kings who wanted to capture Xuanzang, so they asked 30 demons who could cook to make a vegetarian feast for the monk and his disciples, using the best rice and flour, bamboo shoots, tea, mushrooms, tofu and wheat gluten. The cooks were sent to put up a shelter 10 to 15 kilometers along the way and lay on a meal for Xuanzang, so the demons would attack. Eventually the demons were defeated.

Although the Lion Camel Ridge demons ate a lot of human flesh, surprisingly they had vegetarian dishes and demons that could cook vegetarian food.

Vegetarian cooking in China originated in Buddhist monasteries and the Chinese culture and lifestyle is still largely influenced by Chinese Buddhism.

In “Journey to the West,” author Wu Cheng’en describes a lot of vegetarian food eaten by the lead characters. In the final chapter when Xuanzang returned with the sacred Buddhist texts, Emperor Taizong of Tang Dynasty (AD 618-907) hosted a splendid feast, featuring dishes such as sugar-glazed taro, spicy ginger bamboo shoots, black fungus and bean curd sheets and an abundance of fruits and desserts. 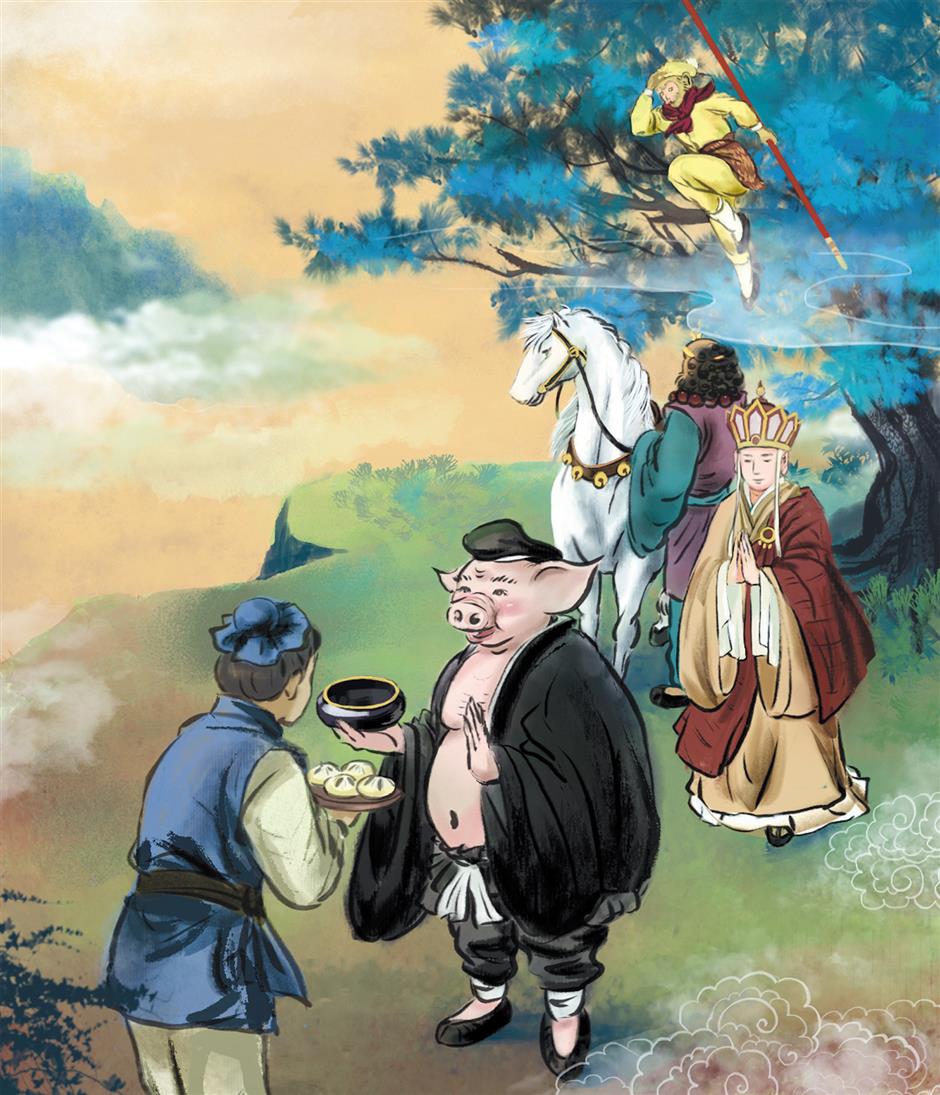 Monk Xuanzang and his disciples carried bo (begging bowl) to obtain food given by others along the journey to the West.

Living with a pure heart and few desires, monks abide by the Buddhist vegetarian diet to live a simple life and calm the spirit. They also consider it a healthy lifestyle to avoid certain diseases like high blood pressure or cholesterol levels.

Also, out of mercy and compassion, Buddhist monks and believers refuse to kill animals for food.

Of course, not all Buddhism believers follow a strict, monastic vegetarian diet every day. Many observe it only on certain fasting days and they often frequent traditional vegetarian restaurants.

Traditional Buddhist cuisine is simple and features a staple (rice, congee or noodles) with vegetables that are stir-fried, braised or cooked in broth.

The Buddhist diet that originated in monasteries keeps food light in its original flavor and avoids pungent ingredients like garlic, leeks and onions. Monks and nuns not only avoid meat, but also eggs and dairy.

Buddhist restaurants run by temples often serve a mushroom noodle soup to visitors and guests. It’s also called luohanmian, as luohan means Arhat, or one who has achieved nirvana.

The inexpensive dish is made with a mushroom broth and the thin noodles are topped with generous portions of assorted mushrooms as well as other green vegetables and vegetarian “chicken” made of bean curd. 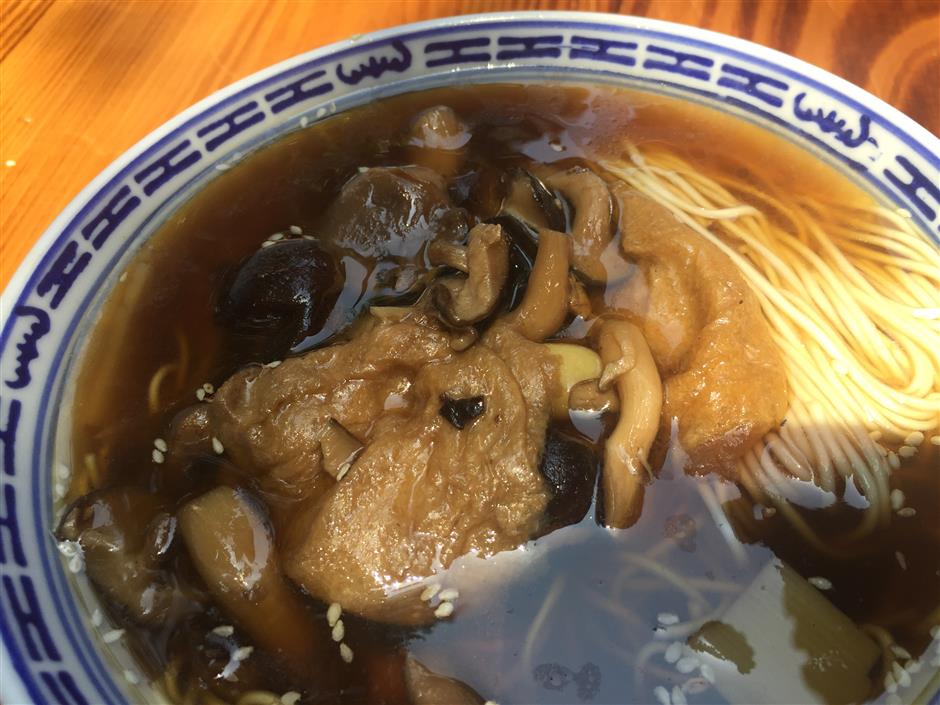 That actually came from the emperor’s court. Since Buddhism was practiced by royals in history, they must fast on certain days. Catering to their preference for rich and bold meat dishes, imperial chefs thought of recipes that would imitate meat dishes with vegetables.

The trick is to find the corresponding vegetarian texture of a meat protein and imitating the flavor with sauces and seasonings. Since a lot of the meat dishes have a softer bite, wheat gluten, soy products and mushrooms are in common use. Using ingredients with little flavor of their own enables the seasonings to work their magic and mimic meat very well.

For example, it is now hairy crab season and a very upscale delicacy is sautéed hairy crab meat and roe. In Shanghainese cuisine, there’s an ovo-lacto vegetarian version of this dish made of inexpensive ingredients including potatoes, bamboo shoots, carrots, shitake mushrooms and eggs.

First, the carrots and potatoes are steamed and mashed. Then in a hot wok, oil is added with grated ginger till the flavor comes out. The carrot mash is stir-fried first and then the potato mash. Sliced shitake mushrooms are added and seasoned with salt, sugar and vinegar. Then, an egg wash is poured in to help thicken the mixture.

Vinegar is the key in imitating the crab flavor, as the acidity blends with the sweetness of the carrots and sugar and is quite close to the taste of dipping sweet crab meat in vinegar.

The final creation can almost pass off as genuine hairy crab dish in both presentation, flavor and texture.

The dish can also be made with eggs as the main ingredient by stir-frying the egg yolk and white separately with ginger, sugar, rice vinegar and yellow wine.

This vegetarian crab meat and roe can also be braised with soft tofu to make another signature Shanghainese dish. 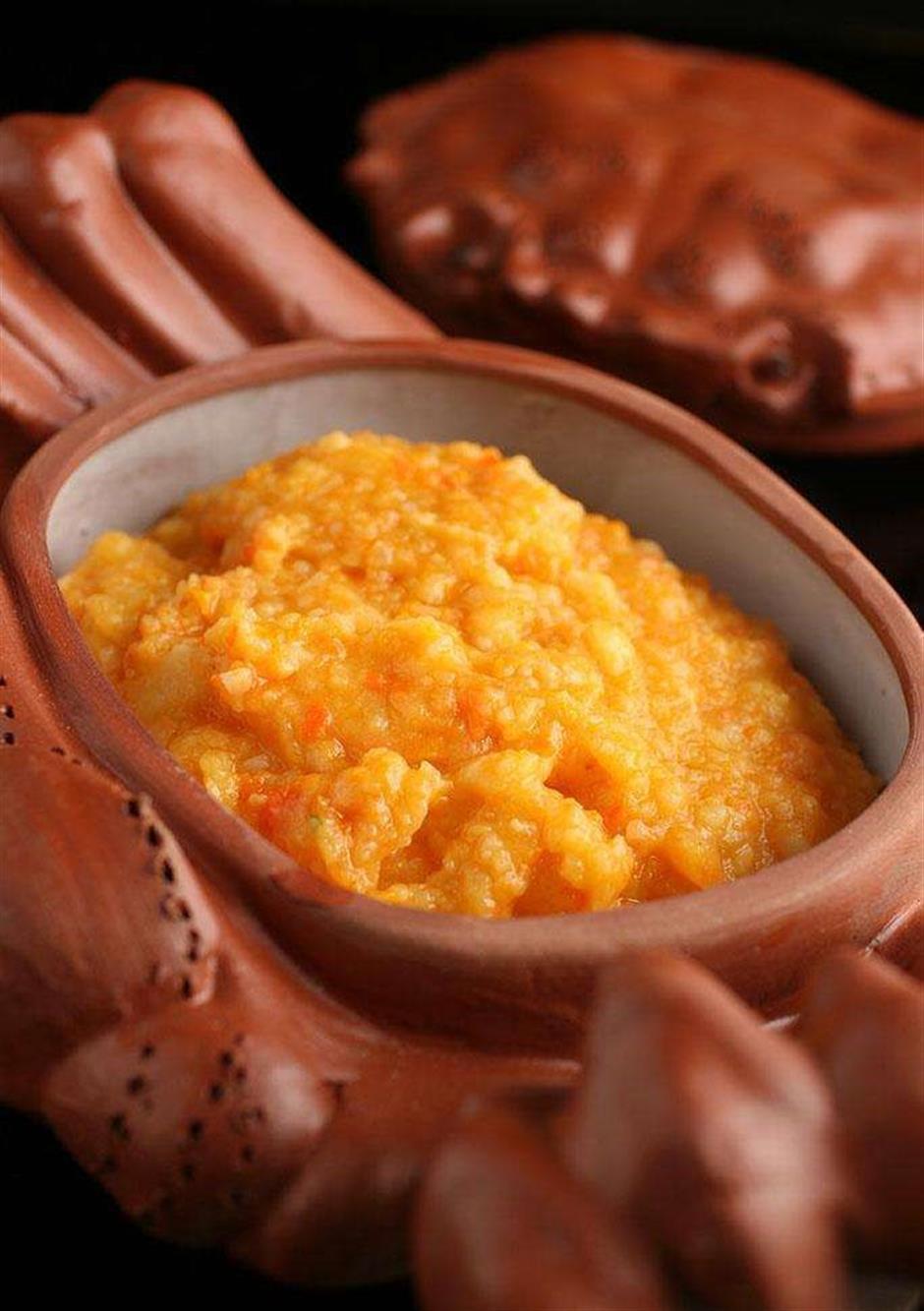 Another classic recipe is a vegan version of the popular sweet and sour pork short ribs.

First, lotus root, with its crunchy texture that resembles cartilage, is cut into finger-long sticks, then placed in between two pieces of soft wheat gluten. Then, it’s dipped in a flour batter and fried in hot oil before stir-fried in a wok with sweet and sour sauce composed of tomato sauce, soy sauce, salt and sugar.

The result is very similar to the original meat dish.

For vegetarians or vegans, mock meat dishes are actually not as healthy as simple plant-based dishes. A large amount of vegetable oil is required to make the vegetables taste more meat-like, and ingredients such as mushrooms and soy products are often deep-fried first to achieve their meaty texture.

And some people think that eating mock meat dishes is self-deceiving because subconsciously there’s still the will of eating meat. But it’s a great transition for people who are new to the vegetarian lifestyle and can encourage more people to try cutting out meat. 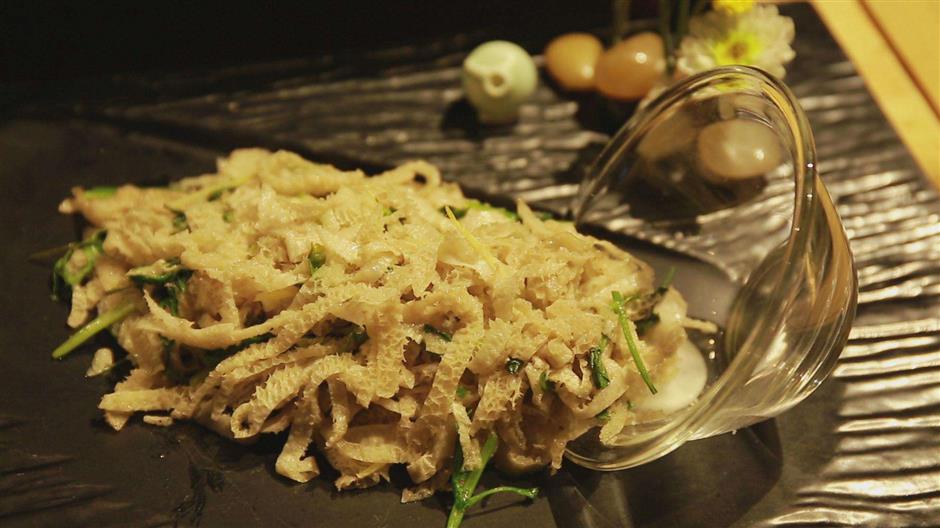