One woman's journey in whisky

In 26 years, Rachel Barrie has tasted over 150,000 casks of whisky and created some of the best flavor characteristics.

Barrie is one of only a handful of female master blenders in an industry dominated by men. She’s the master blender for Brown-Forman’s Glendronach, Benriach and Glenglassaugh distilleries in Speyside in the Highlands of Scotland. The company recently highlighted eight distinct whiskies from the three distilleries on the occasion of the 2019 Whisky L! festival.

Grew up in Inverurie, Aberdeenshire, Barrie’s father made canoes and boards out of fiber glass. When she was a child, her dream was to become a ballerina or concert pianist.

Barrie was educated at Inverurie Academy and studied chemistry at the University of Edinburgh. She began her career as a research scientist at the Scotch Whisky Research Institute and moved into production at The Glenmorangie Company. 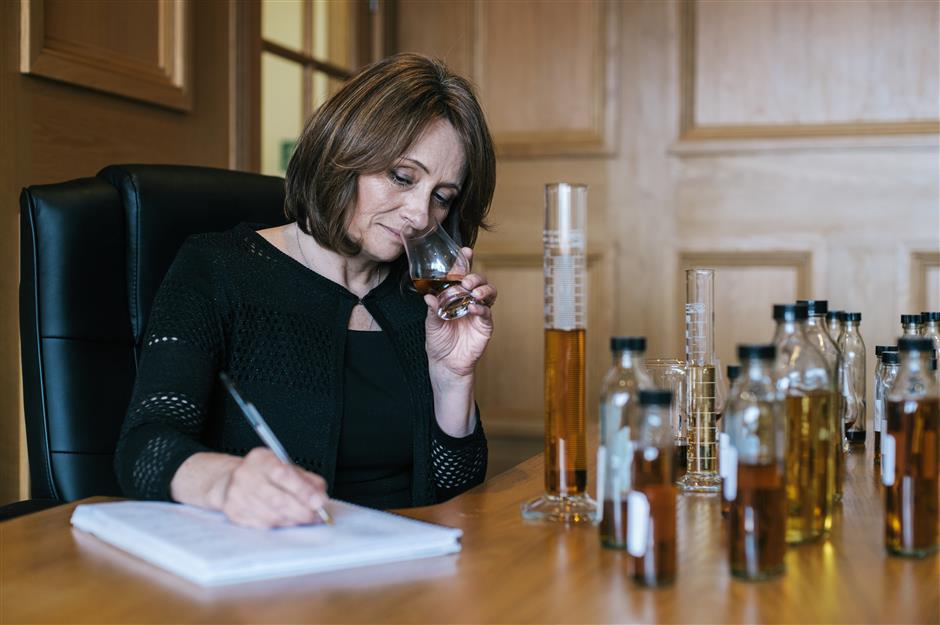 In 2003, Barrie became a master blender. Her day-to-day life involves planning the stocks and recipes for the coming year, selecting new whiskies for product development and limited editions, writing tasting notes and product descriptions, planning the rerack programs for the year and selecting individual casks for batch releases.

In July 2018, Barrie was awarded an honorary doctorate by the University of Edinburgh for services to the whisky industry and for her understanding of the alchemy of whisky.

“I always have a vision of the style of whisky I’d like to compose when putting together a new blend. This vision tends to come from the convergence of numerous stimuli, it’s never just one thing, and at the outset there are always more questions than answers,” she said.

Q: What led you to become a master blender?

A: As soon as I entered the industry through the Scotch Whisky Research Institute and began working on flavor, I knew that becoming a master blender was a goal I wanted to work toward. I was only in my early twenties so I knew it would take time.

I climbed the ladder through quality and product development and became a master blender in 2003. I had a passion for whisky because it was my hobby. It’s my ideal job to combine the analysis with an enjoyment of Scotch whisky.

Rachel Barrie is one of only a handful of female master blenders in the world.

Q: What is like being one of the first female master blenders?

A: It’s a great time to be a woman working in whisky. More women are involved than ever before. Having never been a man in the industry, I can’t comment on whether the barriers are any greater or less for a woman or a man. I think the same and different barriers and struggles exist for any individual in any industry.

Everyone faces issues from time to time. I’m a firm believer in positive thinking and navigating the barriers as feels natural — sometimes jump over them, other times become invisible and walk through them, but most times imagine they’re not there, and they soon disappear.

The key is to be yourself, love what you do, think positively and try your best. The only barriers I’ve run into are the ones I’ve built myself, and over time, I’ve learned to make them disappear.

Q: What is the biggest challenge you face in your line of work?

A: My biggest challenge is that I can’t sample enough whisky! The flavors are changing every day. It’s a continuous journey of trying to keep up with the changes. As soon as you sample one cask you need to sample others and the list keeps growing.

The challenge is strategically managing the inventory and deciding on what the portfolio should be, and managing that for the long-term. I’m looking at how it’s going to mature over the next 25, 30 or 40 years. I need to make predictions for the future when there are so many unknowns.

Q: What whisky do you drink yourself?

A: It depends on what I’m eating and it depends on the weather. For example, when it’s cold, I really like the Glendronach 18-year-old. On Christmas day with a Christmas pudding, it’s to die for! It’s so deep and rich, it has that homely feel to it. However, in the spring I like a Benriach 10-year-old. It captures the zest of an orchard in a wonderful pine forest. Glenglassaugh’s Evolution is very cathartic, very relaxed. So I enjoy all three. Apart from that, I would drink wine, but it’s my second choice after whisky, of course.

﻿
Special Reports
﻿
,
Cherries blossom in a glass of Sangiovese
Time to make the most of mussels
Marrakech, an exotic spice of culinary life
Hand mixers boom hits the nation
Serving up an authentic taste of Singapore
So you think you know noodles?
Michelin stars for restaurant's Taizhou cuisine focus
Restaurants find ways to adapt to outbreak
Snacks will keep your guests happy
The Cut Meatery calls out to local carnivores
EXPLORE SHINE