Ideal ingredient for stews in winter

As the cold air continues to hit Shanghai, hot stews are called for to fend off the cold.

White radish, the juicy root vegetable known as bailuobo, is an essential part of Chinese cuisine in wintertime and the highlight of many winter season stews or braised dishes. Packed with vitamin C and fiber, white radish is regarded as “small ginseng” in China — in traditional Chinese medicine there’s a saying — “eating radish in winter and ginger in summer” — to stress the health benefits of the vegetable.

China has more than 1,000 years of history in the planting and eating of the humble white radish. Su Shi, a poet in the Song Dynasty (960-1279), once explained the cheap “three white” meal he ate as a student to Liu Gong’s father — a pinch of white salt, a plate of white radish and a bowl of white rice.

The original flavor of white radish is sweet with a hint of spiciness, and different kinds of radish can vary in flavor and texture.

The white radish is the most common and it’s very large, has a thinner skin and packs more juice. When cooked, white radish can become soft and absorb the flavors of the soup or broth.

With high-quality white radish — fresh with a natural sweet flavor — simply slice the white radish and boil in water until soft. Season with just salt and white peppercorn powder to taste at the last minute to create a wintertime comfort food. The slices of radish can be eaten with a soy sauce-based dressing for extra flavors. 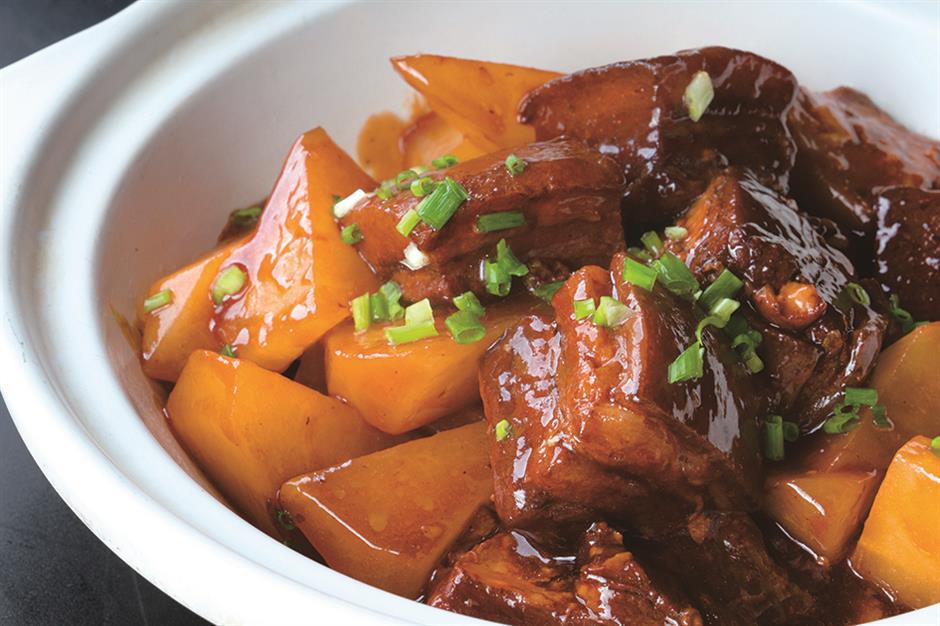 Green radish is favored by many people because it’s sweeter, less spicy and meatier when cooked in dishes. Some also prefer to eat green radish raw in a salad by dressing the slices or shreds with vinegar, soy sauce, sesame oil, salt and sugar. It can also be braised with scallion, soy sauce, salt and sugar that might create a similar feel of eating hongshaorou, a braised pork belly dish.

The sweet, pink-fleshed radish known as xinlimei, sweet in heart, is a crunchy radish that can be eaten directly as a fruit. It’s also used as garnish in various dishes because of its vibrant color.

As white radish can be stewed for a long time in the pot and has the ability to take on the deliciousness of meat especially, it’s a favorite soup ingredient in winter and often paired with pork short ribs, beef brisket and mutton with minimum seasoning. The key is to preserve the sweetness of the radish. To boost nutritional value, some recipes also add goji berries, jujube and other medicinal herbs in the soups. 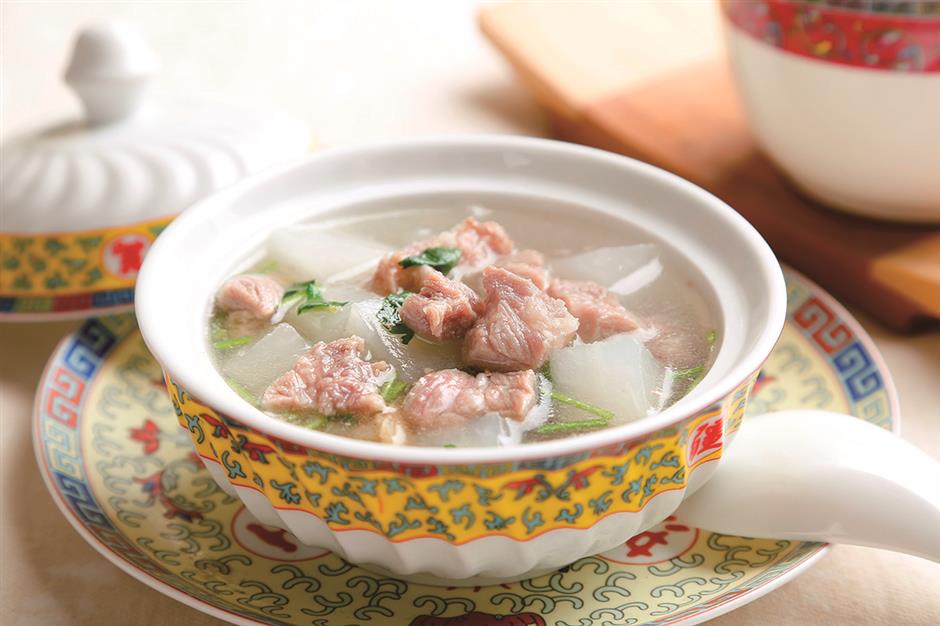 In Shanghai, a classic snack made of white radish is youdunzi, a chunky deep-fried radish cake featuring finely shredded white radish and river shrimps mixed in flour batter. The round is shaped by a special cooking utensil, and the snack has a pleasant contrast of a crispy outside and soft center. Some youdunzi also feature a sweet or savory filling made of red bean paste or minced pork.

White radish cake, the soft and fulfilling dim sum served in most Cantonese restaurants, is an all-time classic especially fit for the winter season. The cake is steamed to cook fully and then sliced to be pan-fried. The most charming part of the cakes is the crispy coating on the outside. More luxurious versions of white radish cake feature dried scallops, cured sausage or meat and rich XO sauce made of dried seafood and cured ham.

After squeezing out most of the juice in shredded white radish, the vegetable is mixed in minced pork and shitake mushrooms to create a flavorful filling for dumplings and steamed buns.

The peel of the white radish is not wasted. Spicy radish skin salad is popular in many parts of China and it’s a simple recipe of infusing radish skin in a salty dressing of vinegar, garlic, sugar and soy sauce. 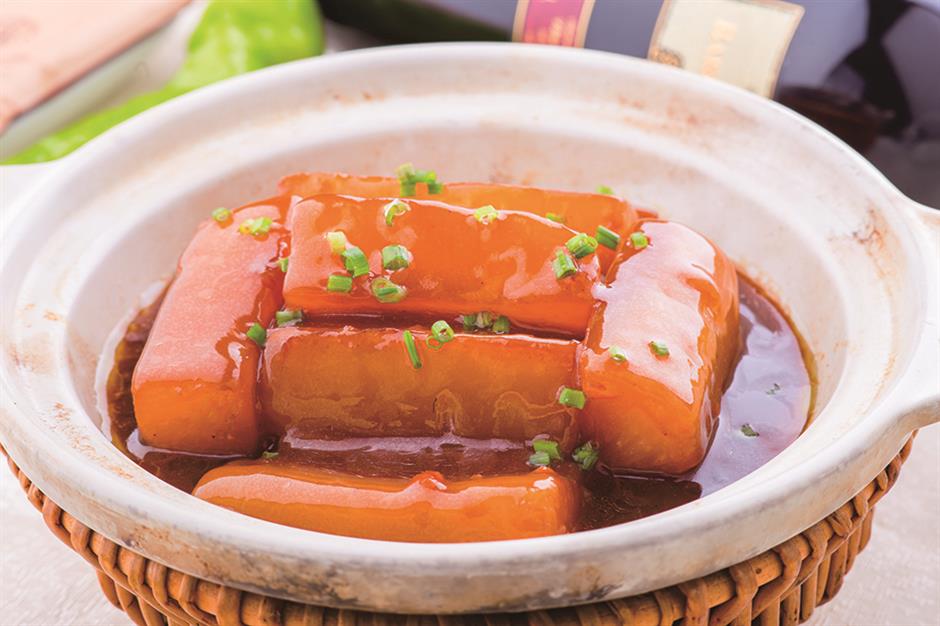 Even though the radish is already a vegetable with a long shelf life, some people further extend that by slicing up the vegetable and air-drying.

After removing a thin layer of outer skin, the fresh radish (preferably the green radish) is cut into small sticks or slices and then spread out on a dry surface in a ventilated area. The water in the radish evaporates quickly and they don’t have to be 100 percent dry. A lot of Chinese households prefer to make dried radish from scratch for hygiene reasons.

When it’s time to cook the dried white radish, simply soak in warm water and then mix with a savory dressing to create a flavorful side dish. A classic Chinese spicy salad dressing is composed of garlic, soy sauce, salt, sugar, vinegar, peppercorn powder and chili powder.

Plain dried white radish is used the same way as the vegetable after it’s soaked and restores some moisture, only it has a vastly different flavor and texture from the fresh ones — chewier and stronger-flavored with a better ability to soak up the sauce.

Pickled white radish, on the other hand, is a convenient flavor booster that can be kept in the fridge. Known as jiangcai, the craft of curing vegetables with lots of salt before pickling them in soy bean sauce was born during a time of food scarcity, yet it has remained one of the most beloved delicacies.

Different styles of jiangcai present diverse flavors, yet a common trait is that the crunchy and tender texture of the vegetables must be preserved. The pickled radish in southern China is sweeter and less spiced than those in the north.

In some places, soured white radish pickle is the go-to solution to loss of appetite. It’s made with simple, white vinegar-based brine seasoned with sugar and red chilis. The pickle can also be stewed with duck to make a sumptuous soup. 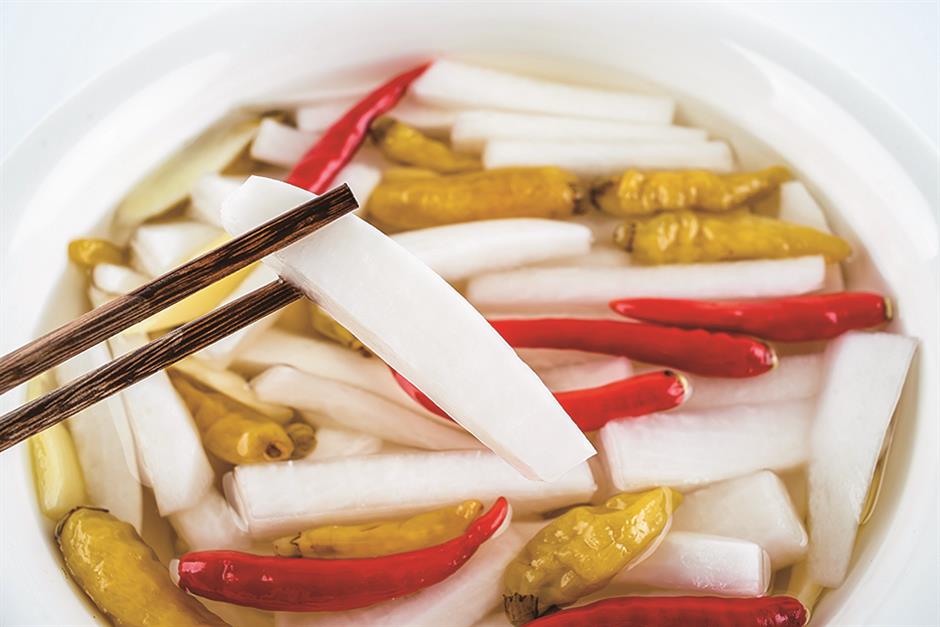 Special Reports
ADVERTISEMENT
Ideal ingredient for stews in winter
Vegetable full of treasures to enjoy
Osteria a pearl in the city's shell for oysters
With a licence for grilling, it has to be Barbarian
A tasty sampler of Shanghai food and wine news
Local restaurants roll out creative winter menus
Premium spot for a tasty bite and service
Going loco for Solana tamales, tacos or margaritas
Juju's Korean BBQ adds flair to Bund dining
Feather in Peacock Room cap for its Sichuan menu
EXPLORE SHINE