Tasty dishes for Year of the Ox: Once a crime, beef now a delight

Many Chinese people believe that the Year of the Ox, the animal that symbolizes diligence and hard work, is destined to go swimmingly, with good weather for crops and a bumper harvest to come.

In ancient China, the ox (or bull, cattle) was used for two main purposes: farming and sacrificial rituals. Beef wasn’t a main protein for consumption because of the high value of the animal, and during some dynasties, especially the Tang (AD 618-907) and Song (AD 960-1279), killing cattle was a serious crime and eating beef was strictly forbidden. It wasn’t until the mid-Qing Dynasty (1644-1911) that beef gradually became acceptable to butcher and eat.

Today, beef is among the most common meats on the dining table. It’s a healthy protein in stir-fries and braised beef is the ideal dish to serve with rice, a diverse selection of beef snacks and much more. Across the country, one can find various beef dishes to celebrate the delicacy.

Winter is the season for hotpot, and Chaoshan, the combined cities of Chaozhou and Shantou in Guangdong Province, is well-known for its beef cuisine, particularly the beef hotpot that cooks the freshest beef possible in a light broth. It’s the ultimate way to enjoy the flavor and texture of beef.

There are two common options for the broth of the Chaoshan beef hotpot: plain drinking water or light beef broth stewed with beef bones. The beef broth is richer and a bowl of beef soup served with chopped celery can be enjoyed, but some prefer the flavorless water to enjoy the original flavor of the fresh beef sliced by hand right before it’s served.

The menu of the Chaoshan beef hotpot restaurants list the cuts of the beef in the usual expression instead of by anatomy. The most popular beef choices include diaolong (usually the prime cuts of rib-eye or sirloin), xiongkoulao (white-colored soft tissue from the brisket), wuhuajian (beef hind shank), nenrou (tender meat, which is from the beef round) and more.

Some restaurants also label the exact amount of time needed to cook each cut to perfection, and a general guideline is to start from the lean meat and finish off with the fattiest cuts. 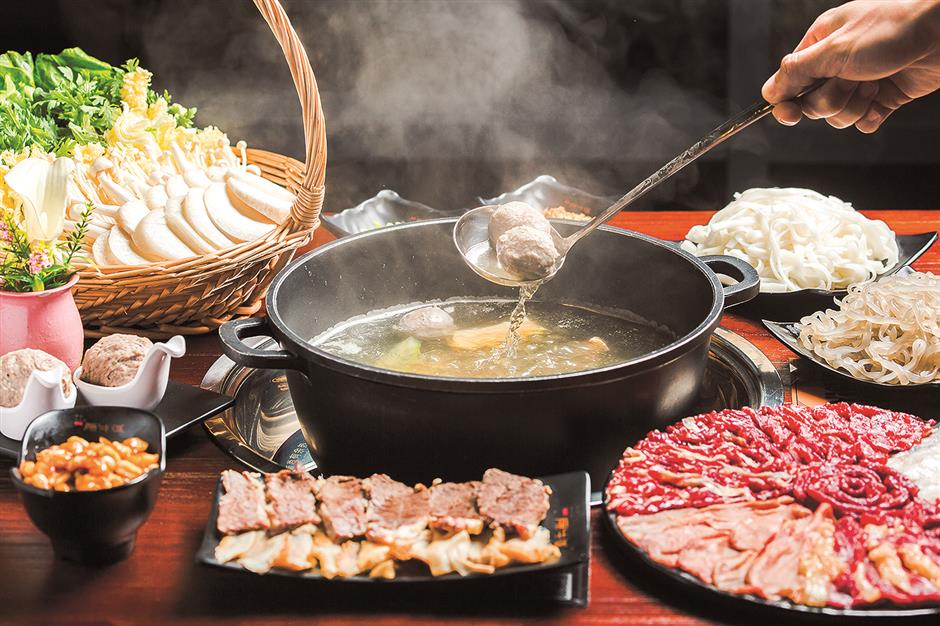 Chaoshan-style beef hotpot emphasizes the freshness of the beef and the exact cooking time needed for each cut.

Offal such as beef tripe, tongue and heart can also be cooked in the hotpot; they have very different textures compare to the meat.

An integral part of the Chaoshan-style beef cuisine is the famous beef meatballs, which are so springy compare to regular meatballs with their loose texture that they could be bounced on the table without losing shape.

These special meatballs are usually sold cooked, with light grey color and firm texture. The meatballs are very easy to chew, and pack lots of juice in the center which can create an explosion of beefy flavors in the mouth.

Making the meatballs is very hard work, as the fresh beef is pounded into a paste with large hammers instead of being minced in a machine or smashed with a knife. Meatballs are made of the seasoned paste by boiling in water for several minutes.

There are two varieties, beef meatballs and beef tendon meatballs. The latter feature some of the tendon tissue in the mince and are extra chewy. They are usually served with the Chaoshan beef hotpot, or simply boiled in beef broth to make a quick soup with simple seasonings of sesame seed oil, white peppercorn powder and chopped celery.

As for the dipping sauce, the go-to options for Chaoshan beef hotpot are satay and umami soy sauce.

In Guangdong Province, another popular beef hotpot tradition is beef offal hotpot, which simply cooks the beef, tripe, intestines, heart and more in a heavily seasoned and spiced broth stewed with beef bones. The offal items are usually cooked in advance to remove any undesirable smell and residue, and the flavor of the hotpot is salty and spicy. The perfect vegetable to cook in the beef offal hotpot is white radish, cut in large chunks to be simmered in the broth and absorb the delicious flavors of the beef.

The sour broth beef hotpot in Guizhou Province, on the other hand, is a more exciting delicacy. The region is known for its unique suantang culinary culture, which is fermented sour broth made of rice soup. The white sour soup also features ingredients such as tomatoes and red chili for a stronger and more appetizing flavor, but it’s not very spicy in taste.

The sour broth beef hotpot cooks thin slices of fresh beef in the rich broth, there’s also the beef slices with skin on that have been cooked in advance and have a delicate, collagen-rich texture. 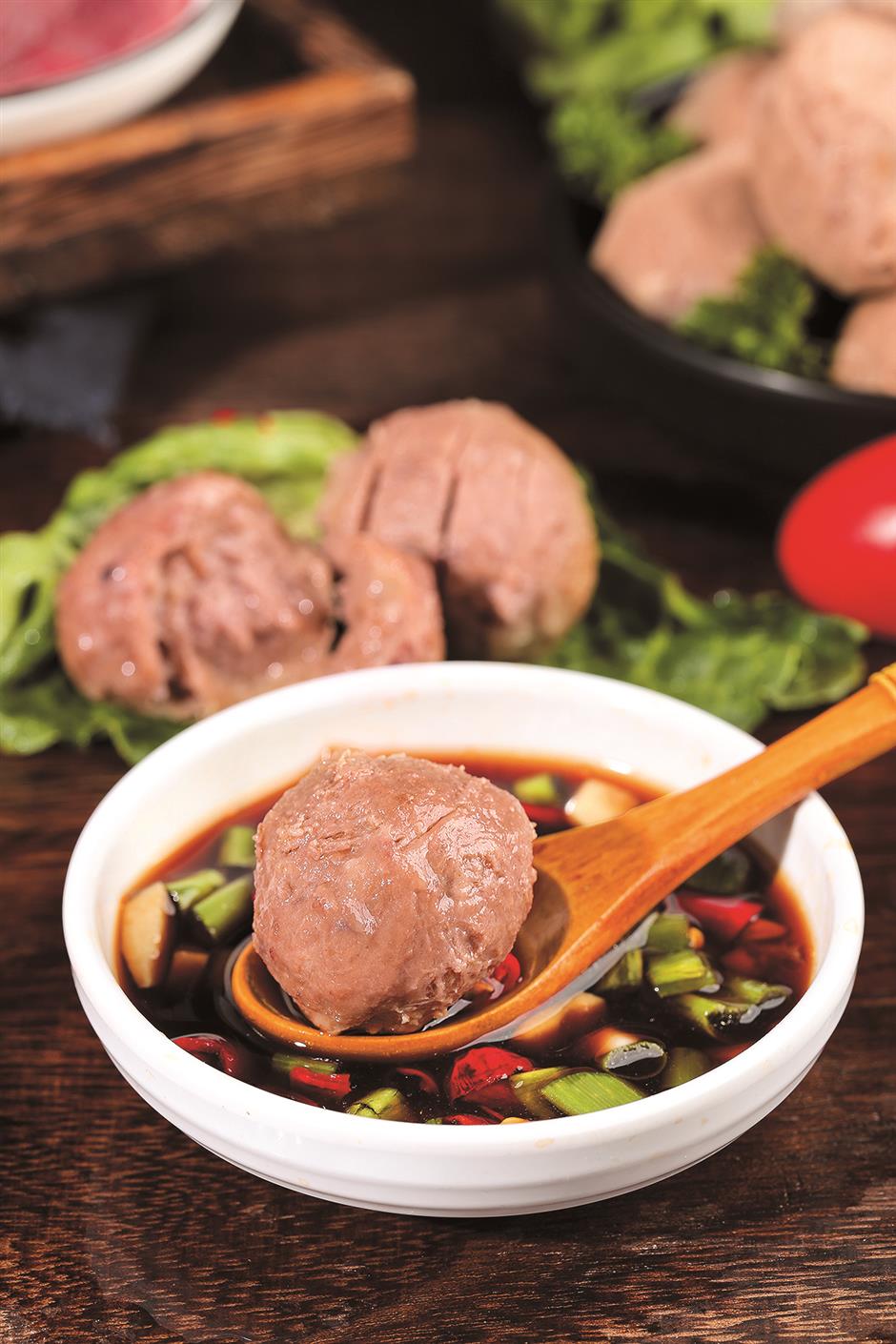 In Chinese cuisine, every part of the beef is utilized in cooking, and sometimes the offal cuts are more expensive than the fresh meat, which can present different textures when handled properly to eliminate any unpleasant smell and taste.

A very famous beef offal dish is the “husband and wife lung slices,” or fuqi feipian, featuring the main ingredients of thinly sliced beef meat, heart, tongue and tripe. The key of the dish is the special spicy, numbing and oily chili dressing.

Because the cow has four stomach chambers, there are several types of beef tripe with different shapes, textures and tastes.

Caodu is the tripe from the first stomach. It’s usually about 5mm in thickness and has a fuzzy surface. Jinqiandu, from the second stomach chamber, is known as honeycomb tripe and is a very hearty, meaty cut with small “holes” on the surface to take on the broth and sauce very well. The texture of jinqiandu is also tender and palatable, and steamed jinqiandu is a traditional dim sum item in Cantonese cuisine. 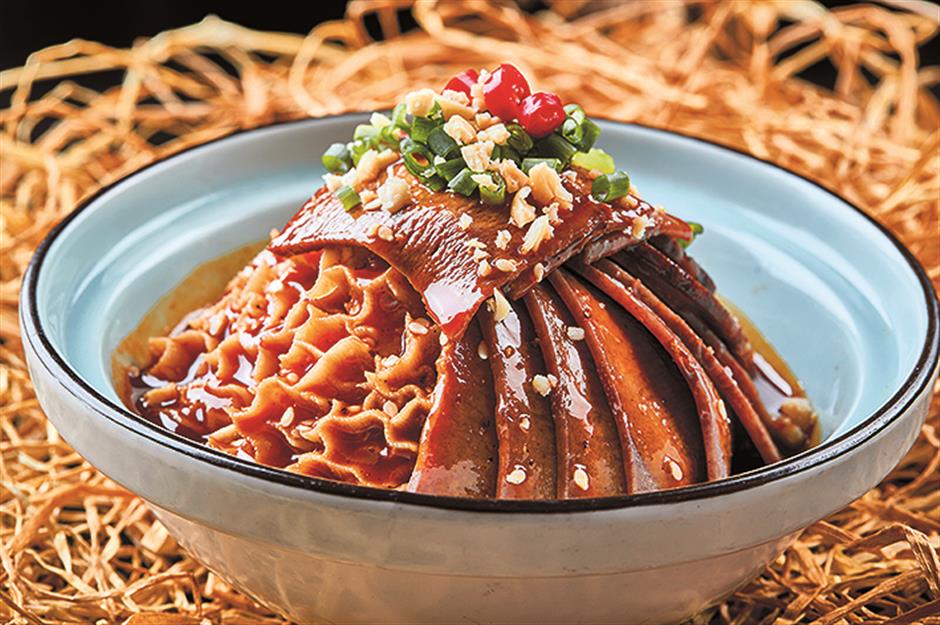 The more popular tripe for spicy Sichuan-style hotpot is the third stomach (omasum), which is also known as maodu, niubaiye or book tripe. This cut of tripe is thinner and the many layers resemble a book. There are tiny bumps on the surface of the tripe, and it’s very easy to cook. In hotpot, maodu only needs to be cooked by dipping in the boiling broth seven to eight times.

The tripe from the last stomach, reed tripe, is not as commonly seen as the first three and can boast a stronger taste.

The beef tripe can be stir-fried, brined, stewed or even made into salads, after the fresh tripe is thoroughly cleaned and boiled to remove any residue.

Assorted beef offal, mainly the tripe, heart and tendon, can be stewed in clay pots with different seasonings, whether plain, curry or spicy, to make a warming dish for winter. A handful of fresh noodles can also be cooked in the broth to complete the meal. 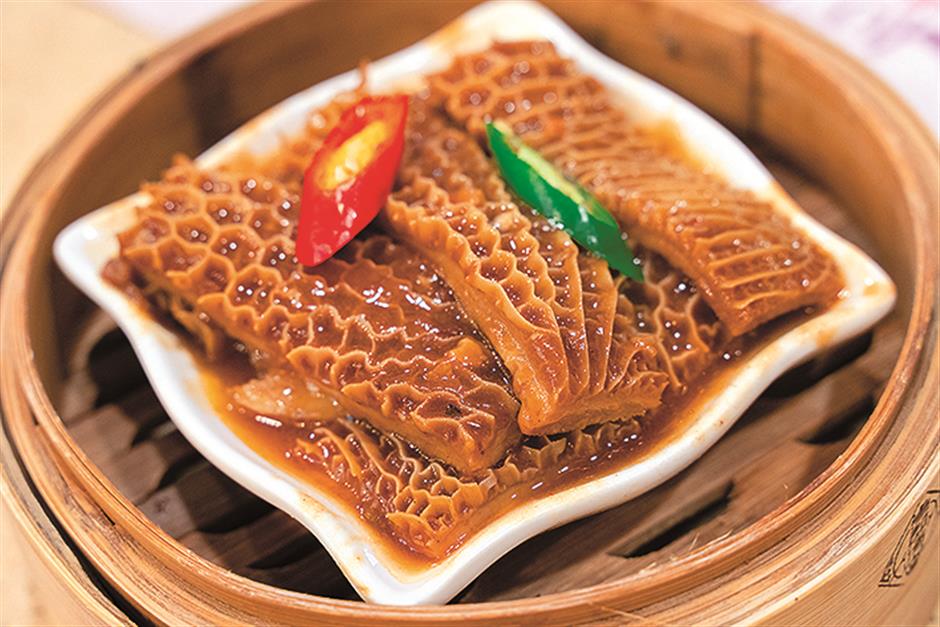