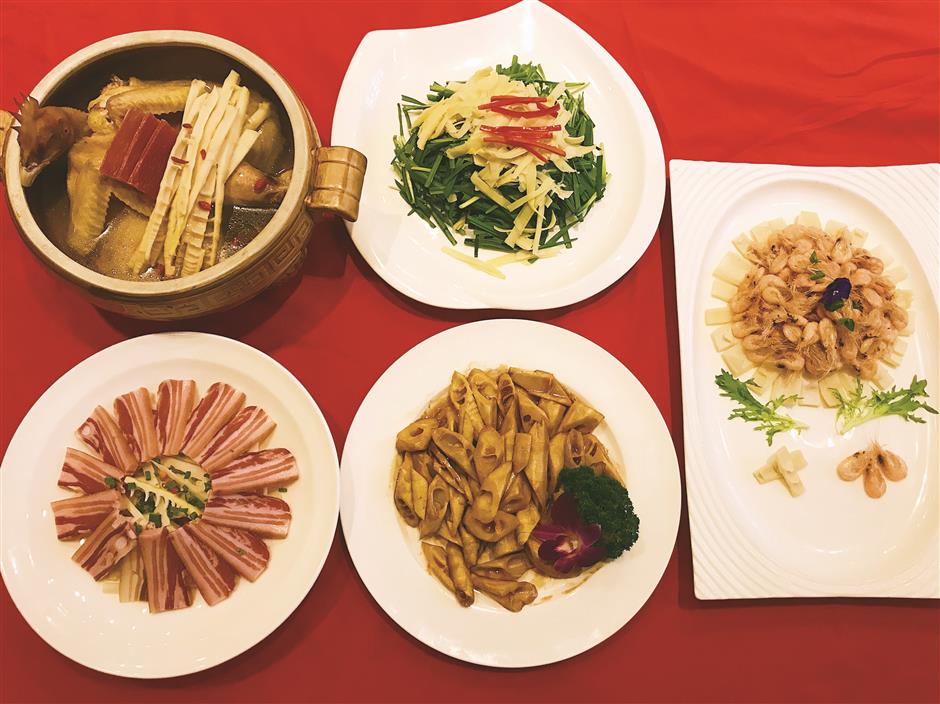 Bamboo shoots break through the ground in Songjiang’s Sheshan, Tianma and Xiaokunshan hills as the nourishing rain in March glosses the region, and the period from late March to early April is the best season for tasting the region’s bamboo shoots.

As part of the 19th Sheshan Bamboo Shoots Gala, the Bamboo Shoots Feast Festival organized by Sheshan Forest Hotel is celebrating its fourth anniversary. The festival will last from March 26 to early May.

The chefs use more than 10 cooking methods including braising, quick-frying, stir-frying, simmering, slippery-frying, steaming and boiling, to present more than 100 dishes with bamboo shoots among their ingredients.

“Though each dish has bamboo shoots as an ingredient, they differ in other major ingredients, and also in flavor and food styling. Therefore, diners won’t feel bored with so many dishes that have the same ingredient of bamboo shoots in common,” said Guo Jian, a chef at the Sheshan Forest Hotel.

“One interesting dish we’ve developed is ‘Buddha’s hands and rings.’ The dish earned its name because our chef cut the bamboo shoots into the shape simulating a Buddha’s multiple hands and then simmer them with rings of pork intestine in soy sauce,” Wang Wei, a manager of Sheshan Forest Hotel, explained.

As bamboo shoots tend to grow older and bigger after the Qingming Festival, or the tomb-sweeping day in early April, and their taste begins to deteriorate, the Bamboo Shoots Feast Festival will end around early May.