The spring market in Shanghai is full of life and joy, as a wide variety of fresh produce hits the market fresh every morning.

From tender bamboo shoots to fragrant Chinese toon, spring is the perfect season to eat light, green and healthy. But to navigate through all the green vegetables and find the right kind for the table, a local vocabulary of unique vegetables will come in handy.

This week, we’ll take a walk through the garden of Chinese green vegetables. 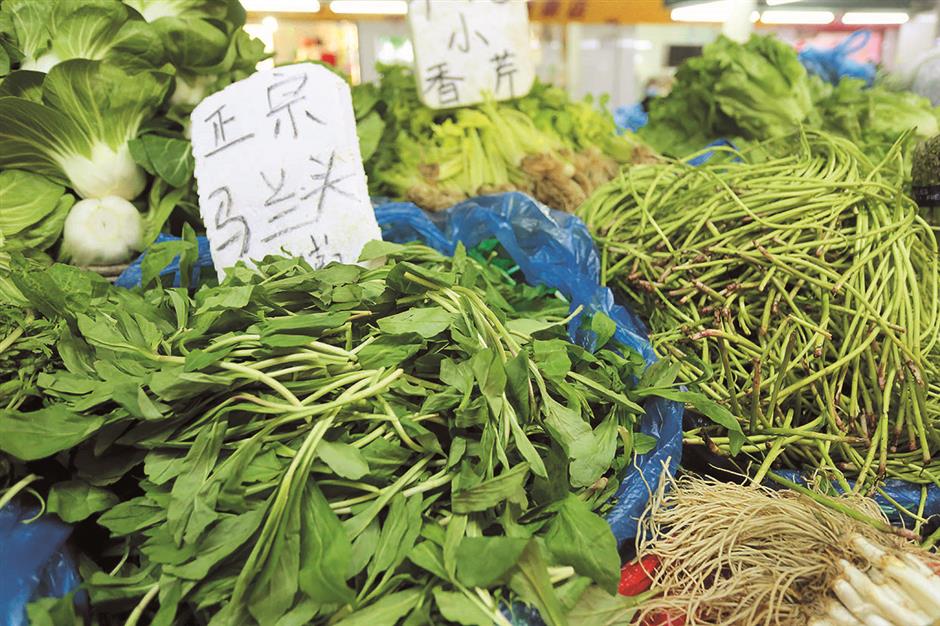 Spring is the best season to enjoy unique, fresh and healthy green vegetables.

Qingcai (青菜), with a literal meaning of green vegetable, commonly refers to the humblest cruciferous green vegetable with edible white stalks and dark green leaves, which is also known as bok choy in the West.

Although in some parts of China, qingcai is spoken as a more general term for vegetables, it can be of any kind from celery to cabbage.

There are different varieties of qingcai, the standard kind is also called shanghaiqing, or Shanghai green, as it’s the most common variety of cabbage in the region.

Jimaocai are the tender sprouts of qingcai with fewer stalks and smaller leaves. They’re usually cheaper.

Caixin is a flowering variety of green vegetable with longer, rounder stalks of meatier texture. Apart from stir-frying, premium quality caixin with its sweet, tender stalks and delicious yellow flowers is perfect for poaching, then seasoning with a sizzling dressing of hot oil splashed over chopped scallion, garlic and light soy sauce.

Spinach is another crowd favorite in spring, the tender, sweet and less grassy taste green is used widely in different styles of cooking. The white-rooted spinach is more common at the moment, which has larger, meatier leaves, a softer texture when cooked and more obvious astringency in taste. 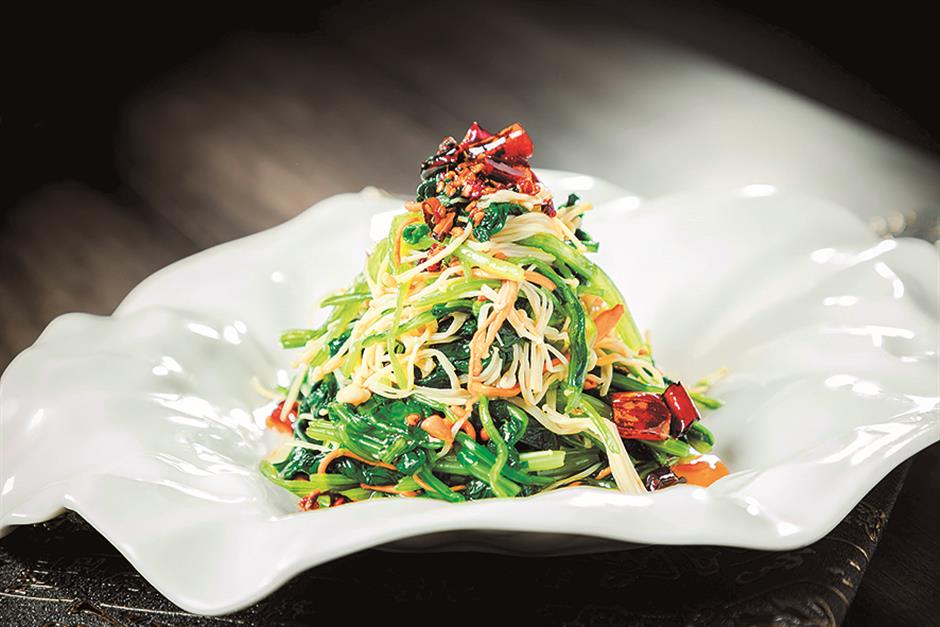 The red-rooted spinach, on the other hand, is more common in autumn and winter, with darker green leaves, thicker stalks and sweeter roots.

Stir-fried spinach usually calls for a minimum seasoning of salt and garlic. A more exciting recipe is to add aged vinegar and toasted peanuts in the stir-fry to bring the flavor to another level.

Fresh, raw spinach as well as similar green leafy vegetables such as kale is rich in oxalic acid, which when consumed in excess may lead to the formation of kidney stones in susceptible people. Boiling the spinach in water briefly can neutralize the acid, and it can then be cooked in stir-fries or soups as intended. This step can also get rid of the astringent and puckery taste of the vegetable while preventing the stir-fry from being too watery.

In spring and summer, a Chinese-style spinach salad is an easy recipe to prepare in minutes by topping a swirl of poached spinach with a savory sesame sauce dressing composed of sesame paste, light soy sauce, salt, sugar and minced garlic to taste.

Spinach, beansprout and cellophane noodle salad made by poaching the three ingredients and mixing with a light dressing is also a healthy, easy recipe on warmer days.

Spinach and egg is an all-time favorite pairing to be used in making breakfast pancakes, soups and stir-fries. 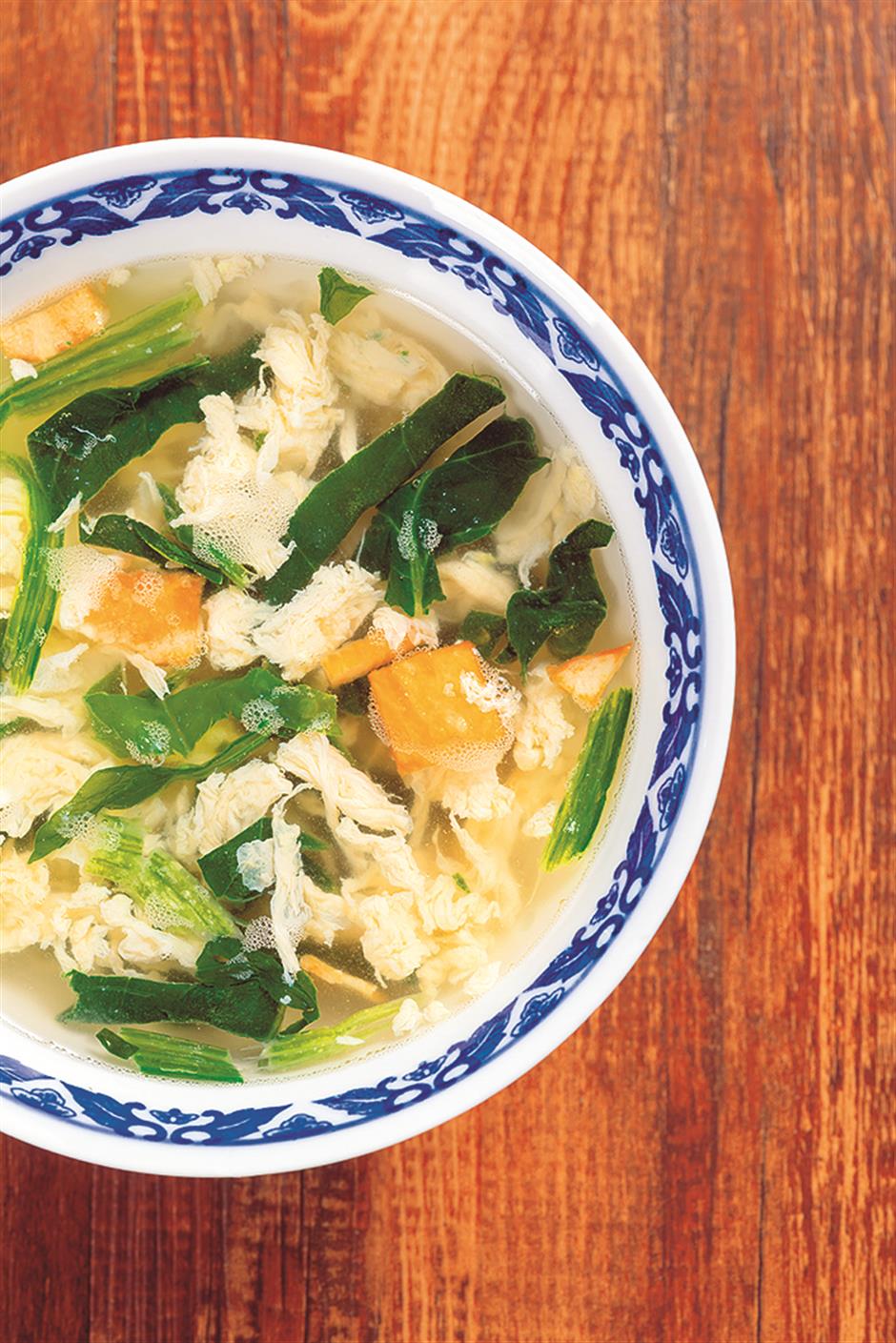 Celery is available all year around, and the better seasons to enjoy celery are spring and autumn. The larger celery in light green color is known as xiqin. The stalks are refreshing and light in taste, which are perfect for stir-frying. A traditional Chinese celery stir-fry technique is to add cashew nuts, black fungus or fresh lily bulb to boost taste and texture. Lean chicken meat and shrimp can be added for extra protein.

The greener and more aromatic celery known as xiangqin has much thinner stalks and more green leaves. It’s ideal for stir-frying with cured meats/sausages, dried tofu or simply with garlic and scallion. With a more intense fragrance, xiangqin can also be chopped finely to serve as a herbal topping over soups and stews just like cilantro. A handful of chopped xiangqin can instantly boost the flavor of tomato beef soup or Chaoshan-style beef meatball soup. 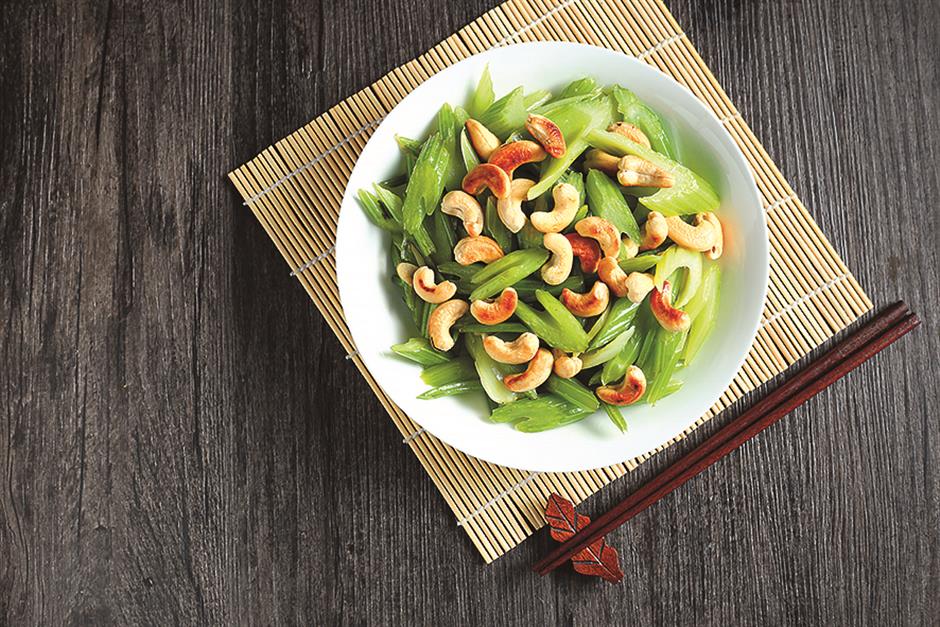 Steamed celery leaf is a recipe to make use of the leaves after the stalks are used in stir-fries or soups. After thoroughly rinsing the leaves, set them aside to dry up the moisture on the surface, then coat with a generous amount of flour which has been seasoned with salt and white pepper in advance. The steamed celery leaves are usually served with a flavorful dressing of vinegar, minced garlic and light soy sauce.

White celery is a less common aquatic variety with white stalks and green leaves. It’s not as crunchy as the green celeries, but is juicier and more tender, making it not only ideal for light stir-frying but also in salads. White celery usually comes in season between winter and spring, and it’s commonly cultivated in southern Jiangsu Province.

Water celery, or shuiqin, is another variety that grows in shallow water ponds. The tender sprouts and leaves are considered a delicacy, but after flowering the stalks and leaves contain too much fiber for consumption.

Luhao (芦蒿), tonghao (茼蒿) and penghao (蓬蒿) are three green vegetables that even Chinese people may find confusing to distinguish. The chrysanthemum greens are usually cooked in stir-fries or hotpots, presenting different taste and texture.

Luhao, the Artemisia Selengensis, has crunchy stalks that are refreshing and tender in taste, which are usually stir-fried with pork or cured meats. Tonghao, which is garland chrysanthemum, has tender leaves and meaty stalks, plus a unique fragrance that some people might find unpleasant. It’s suited for cooking in hotpots as the stalks become softened and the leaves take on the flavorful broth. Penghao, on the other hand, is consumed for its leaves, hence the two varieties of large leaf and small leaf penghao. This vegetable has a hint of chrysanthemum flower aroma and is usually stir-fried with garlic and oil or poached to serve as salad. 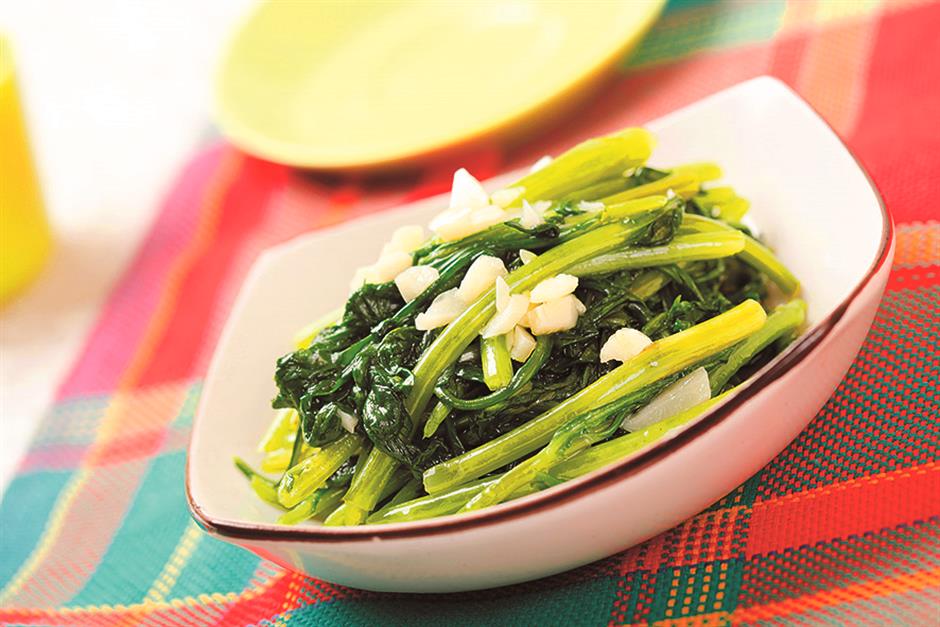 The first batches of Chinese toon have arrived on the market, and the vegetable with a unique fragrance that some people may find disturbing is only available for a very short period of time. The price for xiangchun is very high early in the season, reaching 70 yuan (US$10.83) per 500 grams.

There are two common varieties of Chinese toon, the red toon and green toon. Both are cooked and served in the same way: Added into scrambled eggs and pancakes, or poached to serve with tofu and a dressing.

In spring, two “wild” varieties of green vegetable or herb are also very popular in Shanghai: caotou which is edible clover and jicai, shepherd’s purse.

Caotou is a delicate green vegetable with a grassy flavor, and the classic recipe is to sauté it with baijiu, a finishing touch to release the spirit’s lingering fragrance.

Shepherd’s purse, on the other hand, is usually chopped up and mixed in fillings to make wonton, dumplings, spring rolls and more.

Shepherd’s purse and tofu soup is a local classic, highlighting a light and refreshing flavor as well as the silky-smooth texture of soft tofu.