Crunch and sweetness to cheer up the winter spirit

Crunchy candy, or sutang (酥糖), is a wintertime favorite, especially during the Spring Festival holiday season. The square or oval-shaped candies are extra sweet, fragrant, nutty and crunchy, and they melt in the mouth easily.

Crunchy candies today are mostly derived from the peanut candy that dates back to the Warring States Period (476-221 BC) when people felt constant danger at all times. Some wealthier people were fleeing from the wars, and to make foods that were high in caloric value and easy to carry, they simmered maltose with peanuts and then cut it into smaller, irregular pieces.

The base of the candy is composed of maltose and a list of dry ingredients, which typically include flour, sugar, toasted seeds or nuts, dried fruits and others. 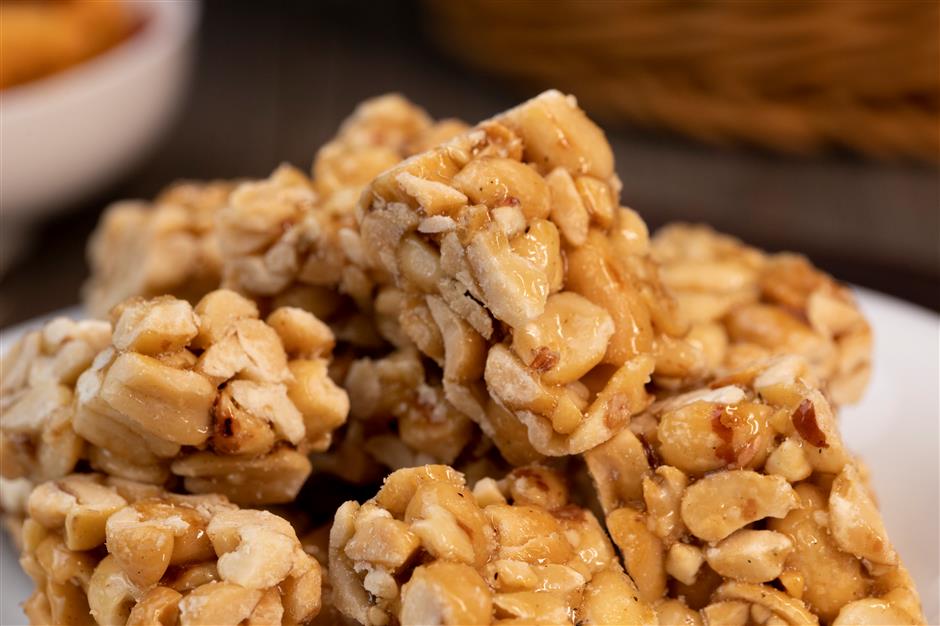 Classic Chinese crunchy candies feature toasted sesame seeds and peanuts. Black sesame crunchy candy is becoming more popular. In traditional Chinese medicine, black sesame is known for its anti-aging properties, especially for nourishing the scalp and stimulating hair growth, and the number of people who are anxious about hair loss due to high stress and an intensive workload is also growing.

In addition to using whole peanuts to make crunchy candies, there's also a version of the treat that uses crushed peanuts, which are denser and more intense in flavor.

Prawn-flavored crunchy candy, or daxiasu (大虾酥), is a nostalgic childhood memory for many people, especially in northern China. It's a small, cylindrical candy wrapped in red paper. The candy has a smooth, white surface that's quite crisp, and a filling of crushed peanuts, sesame and other crunchy ingredients. 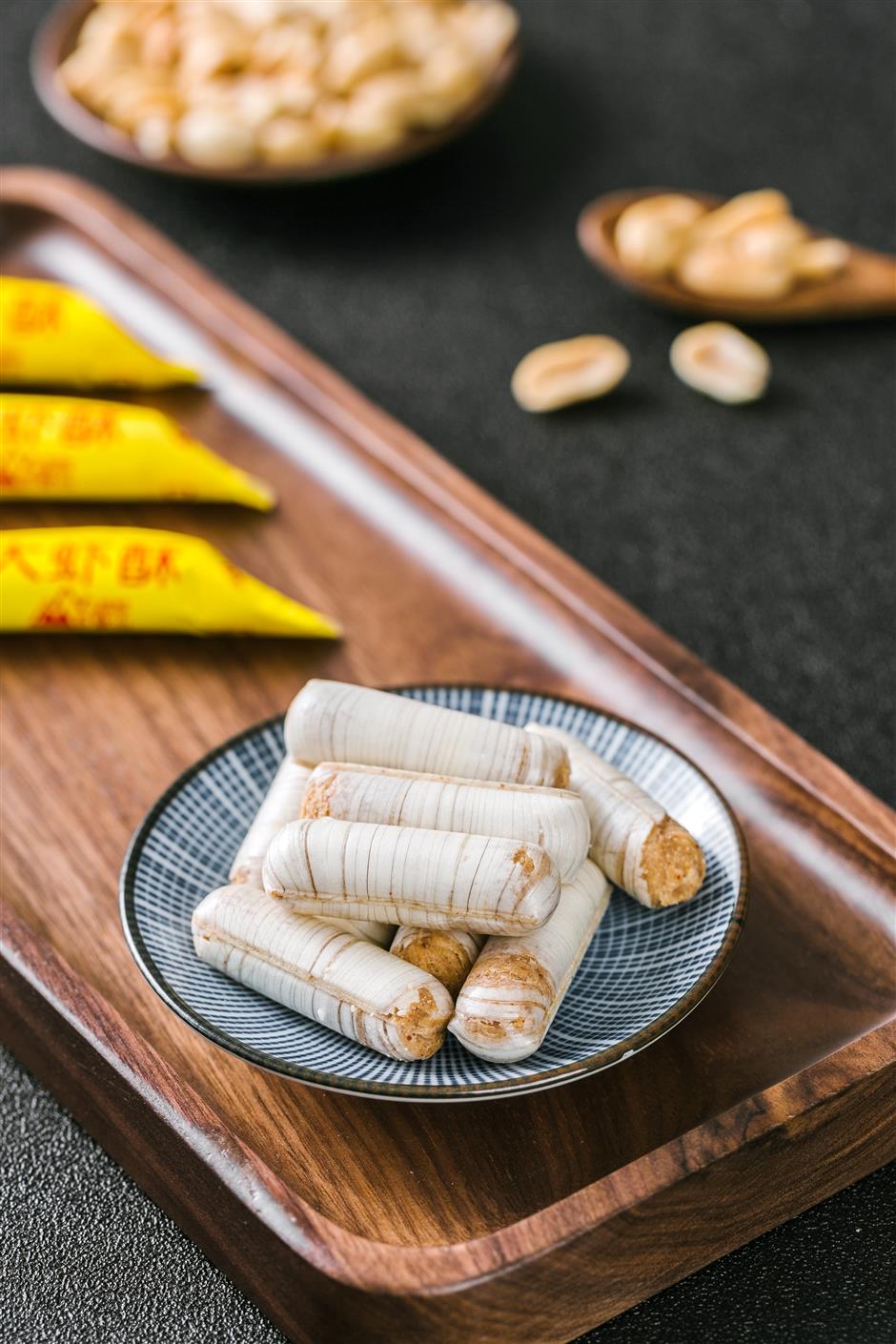 Daxiasu has a nutty, crunchy filling.

Crunchy candies can also be slightly savory, as the hint of salt actually elevates the rich, sweet flavors of the maltose and nuts. Luxihe Taosu's recently released new peanut crunchy candy has a salt-and-pepper flavor in addition to the original sweet recipe. The salt actually presents a more balanced flavor profile and the candies are nuttier and more fragrant rather than a straightforward sweet taste.

Cereal and grains are also made into crunchy candy bars. Rice, millet and oats are first popped like popcorn, then they are tossed into a maltose syrup to be evenly coated then chilled and cut into candy bars. 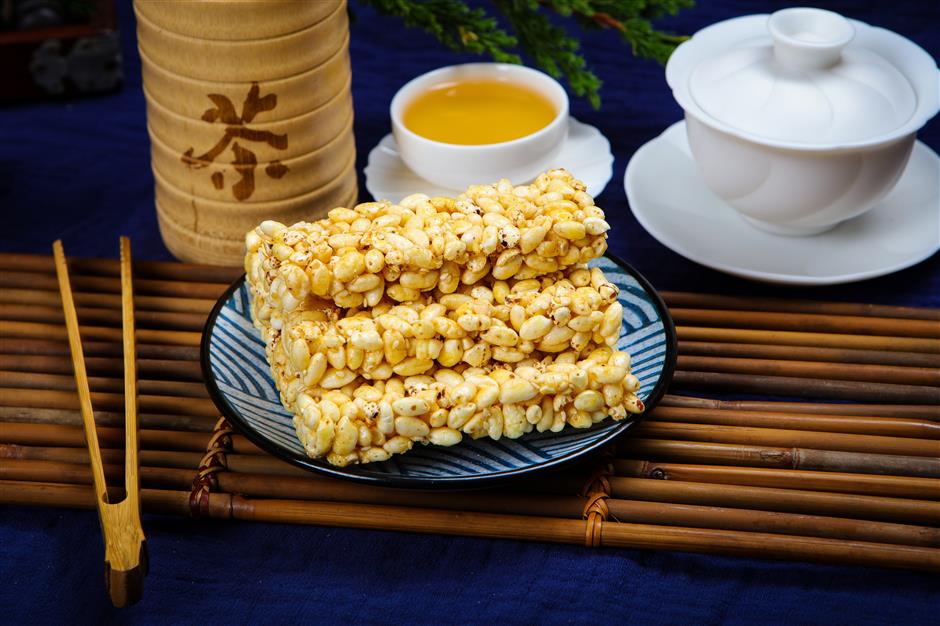 Traditional soy crunchy candy is made with a special dough of mixed warm maltose and soy powder. The sweet dough is folded and rolled to create the many crunchy, thin layers. A filling can also be added during the folding process, and the candy's level of sweetness is influenced by the number of layers since more layers require more soy powder.

The crunchy candies are best when they are freshly made and cut, and some of the recipes are not too complex to be made at home as well.

The crunchy candy is made of nutrient-rich black sesame seeds.

1. The seeds and nuts should be toasted in advance to release their full fragrance and flavor. You can buy toasted black sesame seeds from the market and then toast the peanuts and walnuts in your home oven (20 minutes for peanuts, 6 minutes for walnuts that have been broken into smaller pieces, at 160 degrees Celsius). Keep the nuts and seeds warm while you prepare the maltose.

2. In a non-stick pan, melt the maltose and fine granulated sugar with water over medium heat. Do not stir until melted, then switch to low heat and stir continuously to heat the syrup to a temperature of about 116 degrees Celsius.

3. Pour the nuts and seeds into the maltose syrup and stir evenly and quickly while the pan is over low heat. Butter the surface of a baking sheet and then pour in the mixture. Press it thinly with a rolling pin.

4. When the temperature cools down and still remains warm, slice the sheet of black sesame candy into smaller pieces. If it's completely cooled down, the harder texture will make it more difficult to cut. 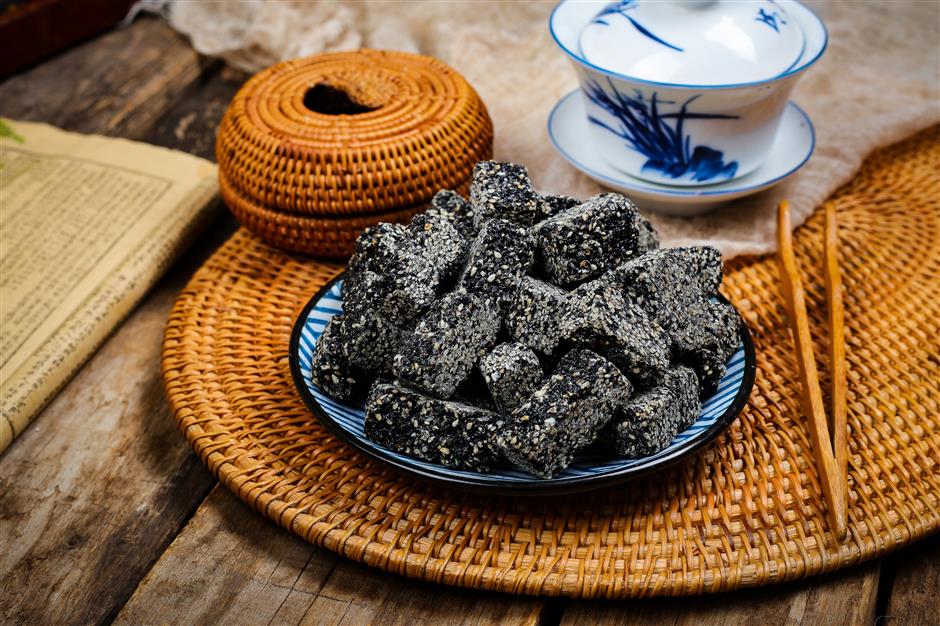 ﻿
Special Reports
﻿
Crunch and sweetness to cheer up the winter spirit
Blue butter cookie tins are a symbol of Denmark
Extreme emotions of Pinot Grigio
No longer in a pickle with Spanish bubbles
Wine-market perseverance in a rocky 2021 augurs well for 2022
One of nature's rarest colors produces extravagant wine
The sweet vino art of assuaging stinky foods
Winter veggies meet Italy's vino queen
Fujian delicacies and mountain fresh Austrian white wines
A 2021 food retrospective: a look back at the year in local food
EXPLORE SHINE