Walk back in time on Hangzhou Metro Line 7 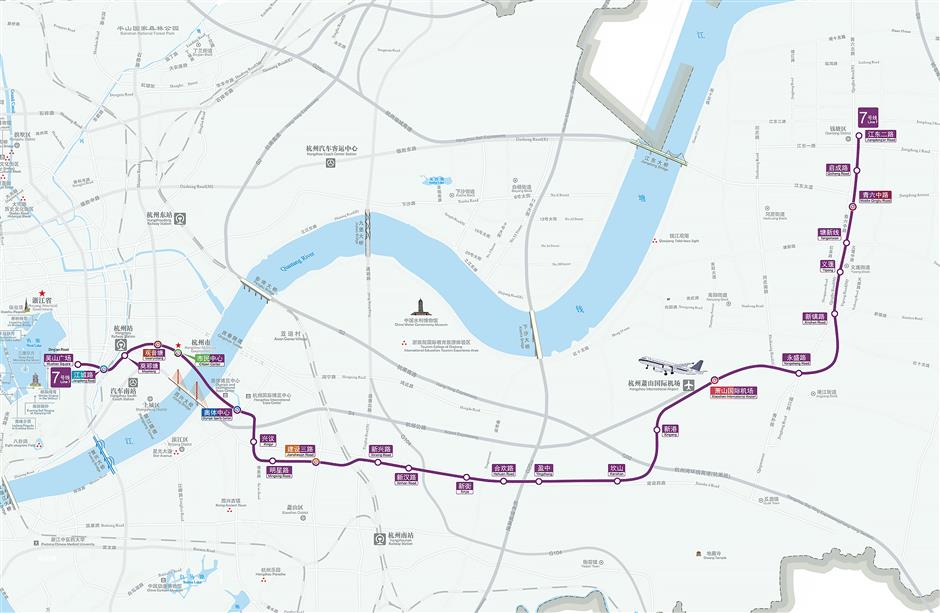 It links many sites from the city's bygone era. Here's a list of attractions along the subway route.

The temple is hidden in the lush vegetation of Wushan Hill. Dongyue refers to the God of Dongyue, or God of Mount Tai, who is believed to connect the Earth and heaven in Taoism.

Originally built in the Northern Song Dynasty (960-1127), it had been destroyed and rebuilt several times throughout several dynasties. Last year, local authorities gave it a facelift.

The temple is listed as a protected building in Hangzhou. Unlike its modern-day solitude, it was once crowded with devout believers during the Song Dynasty (960-1279) who worshipped the God of Dongyue.

Ancient feudal emperors emphasized the rituals for worshipping the god and built Dongyue temples across China. However, such phenomena have declined in the modern era.

The temple keeps a low profile and attracts few tourists. However, the situation changes every April when its two 530-year-old qiushu (楸树) bloom. Visitors can take photos in the blossoms that will stay in bloom through the end of May.

Although historical archives recorded the temple's origin, no documents indicate who planted the two qiushu.

Qiushu, commonly known as catalpa bungei, is a species of catalpa native to China. The flowers are arranged in a corymb and covered with pink spots. It has been cultivated in the country for centuries as an ornamental tree in gardens and inside mansions to reflect the inhabitant's aesthetics.

How to get there: Get off at Wushan Square Station 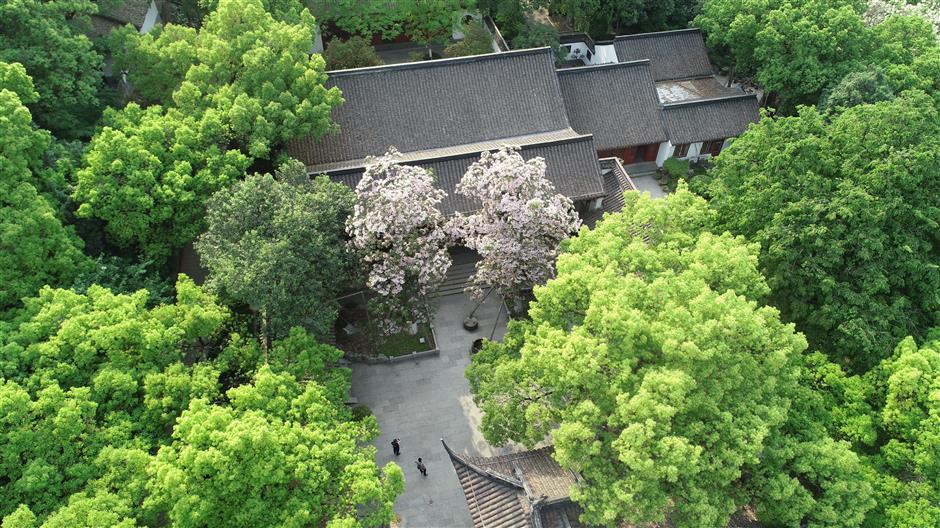 Dongyue Temple is hidden in the lush vegetation of Wushan Hill.

People named the lane after Five Willow Imperial Palace, which was built in the Southern Song Dynasty(1127-1279). Though the royal building no longer exists, the lane is still there and is listed as a key protected site in the city.

The lane begins at Doufu No. 3 Bridge and goes to Daoyuan Lane. The word "doufu" literally means competing who is richer in Chinese. It's said three rich men lived along the river. They each built a stone bridge in front of their houses to flaunt their wealth – even though the distance between the bridges is only around 100 meters.

In the early Qing Dynasty (1644-1911), the Hangzhou Railway Station was built nearby. The lane soon prospered as a trading center for rice and vegetables.

A few years ago, a plan was launched to protect the lane and nearby houses. The wood and brick structures remain while the buildings have been renovated into businesses or homes.

Owing to its long history, the lane and its old buildings are covered with moss in the spring, which attracts numerous photographers.

How to get there: Get off at Jiangcheng Road Station

Like other places in China, many roads, bridges and communities in Hangzhou bear the names of historic events, legends and people with connections to the city.

Yuanbao Street is emblematic of those connections.

It is Hangzhou's last preserved stone slab road. Though narrow and short compared to nearby avenues, it was the city's main thoroughfare in ancient times.

In Chinese, yuanbao refers to the shoe-shaped silver ingots that once served as currency in the country.

In the late Qing Dynasty, a tailor and his beautiful wife lived on the street. A rich bully who lived nearby had a lascivious desire for the wife and frequently threatened the couple.

To protect her husband, the woman promised to marry the troublemaker but ordered him to leave a pile of yuanbao on the street for her husband. The tailor took the money and fled to another city. Sadly, the woman committed suicide after remarrying the bully. To mark this tragedy, the street was renamed Yuanbao Street.

Today, this narrow lane is hidden between residential buildings and Hu Xueyan's former residence, secluded from the bustling downtown area.

Hu was a late Qing Dynasty herb merchant and one of the most famous entrepreneurs in China. Today, his luxurious private home, which was built in 1827, is well-preserved and open to the public every day.

How to get there: Get off at Jiangcheng Road Station