The WWE circus was back in town looking to tag more Chinese talent three years after it first stepped into the Shanghai ring.

Thousands of applications were submitted from regions and nations all over Asia. But only 42 raw competitors were selected to take part in the Shanghai competition which would eventually culminate with a spot in the WWE talent pool.

“This time it was 20 percent bigger than the last trial (three years ago),” said John Brody, executive vice president of Global Sales & Head of International WWE.

“Shanghai is still the base. About 20 percent of the competitors were women and 30 of them came from China.”

Women wrestlers have witnessed some glorious performances in the WWE ring, from none more so than superstar Li Xia, who was the first Chinese woman in WWE history to perform.

Li was spotted at the 2016 trial. The 31-year-old is from Sichuan Province, and her costume is a modified qipao, a traditional Chinese dress.

The fan is the weapon she chooses, as it is a symbol of femininity. And when Li makes a move, she opens up her fan and shouts, “I’m spicy. You will feel the heat of Li Xia.” Her fans also chose her popular slogan “Rise up spice girl” from an online poll. 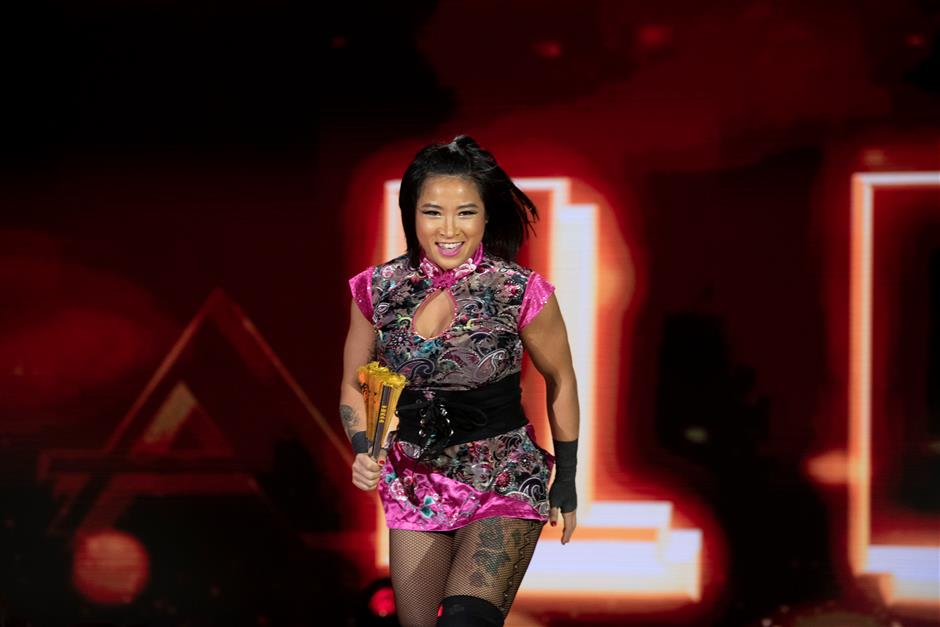 Li Xia is the first Chinese woman to compete in a WWE ring.

Now Li came back as a guide to other potential wrestling wannabes while the media followed the trials and tribulations of the competitors under the glare of the camera, allowing fans to watch the process of making the next WWE superstar.

The trials in Shanghai lasted four days, and at the end contestants were told whether they had earned a spot and would continue their journey to the US.

The intensity of the competition made some candidates quit on the first day.

“I’m exhausted. But I’ve been a WWE fan for a long time, and this was a golden opportunity,” said Luo Jie, a contestant with wrestling experience.

“None of us saw this intensity before we signed up. And only by will power can we carry on through when being pushed

“It’s not easy to fake personalities for four days,” said Canyon Ceman, vice president of talent development department of WWE. “Not when there are eyes and cameras watching them when they stretch or having dinner.”

About 43 percent of the world’s WWE’s fans come from outside of the US, Ceman said.

And he added that it’s their job to have a top talent pool to match its fan base.

Of the seven Chinese candidates picked last time, only three remained in the team.

Can the growth of big brands also reflect the growing trend of wrestling in the country in some way?

“In 2016, none of the contestants had wrestling experience, and we had to pick athletes from other backgrounds and teach them from zero,” said Ceman.

“But in this trial, 25 have wrestling experience.” 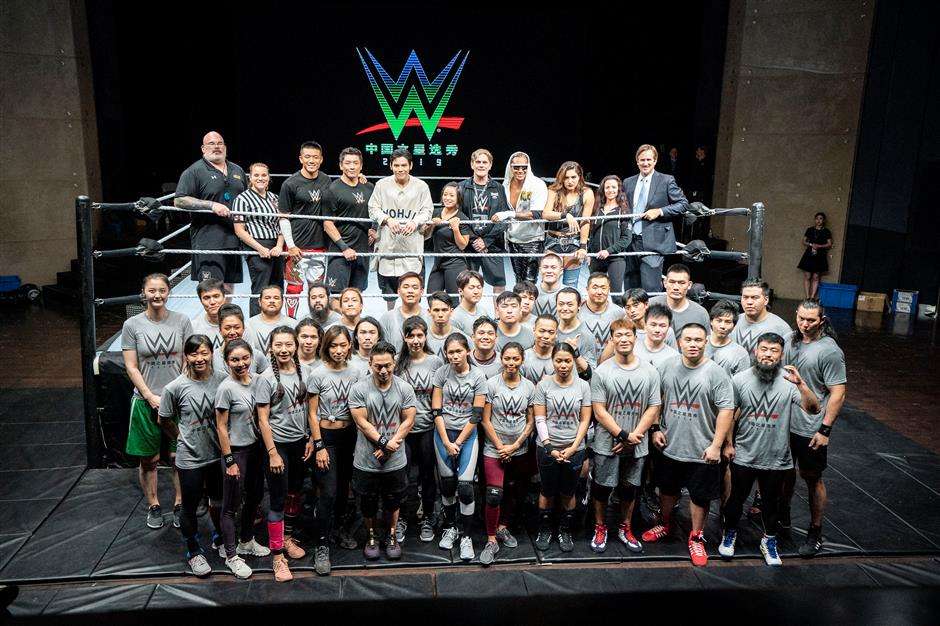 The contestants who took part in the 2019 Shanghai trial pose for photos.

The institute is the world’s biggest MMA training and development center — with a landscape of 8,600 square meters,

nearly triple the size of the original UFC Performance Institute in Las Vegas.

“The facilities will give us the ability to train the next generation of Chinese MMA stars and allow fans to interact with our brand in an authentic way,” said Ike Lawrence Epstein, UFC Chief Operating

Officer. Last year, the Chinese National Bureau of Statistics revealed figures on the growth of China’s sport’s industry since

The two big brands have reached out and targeted major Chinese cities to expand their franchises in Shanghai, Beijing and Shenzhen, where the majority viewers and customers are based.

According to Nielson Sports’ estimation, 82 percent of sports fans come from these major cities.

Xinhua News Agency earlier reported that China’s GDP per capita exceeded US$5,000 in 2011 and reached US$9,462 last year, according to official data. Public awareness of fitness begins when a nation’s GDP per capita hits US$5,000, said Liu Qing, deputy secretary-general at Chinese Association of Sport Industry, in 2016.

Should it surpass US$8,000, the fitness industry will be a pillar of the national economy.

UFC entered Chinese markets only two years ago. WWE has planned its next move by launching consumer products and a Jindong shop online and is now ready to enter China’ two-tier cities.

“Many second and third-tier cities are at the cusp of that figure. So what we will do is just to be ready and be there,” said Jay Lee, vice president and general manager of China.