'We love Pudong:' Why expats find it so attractive 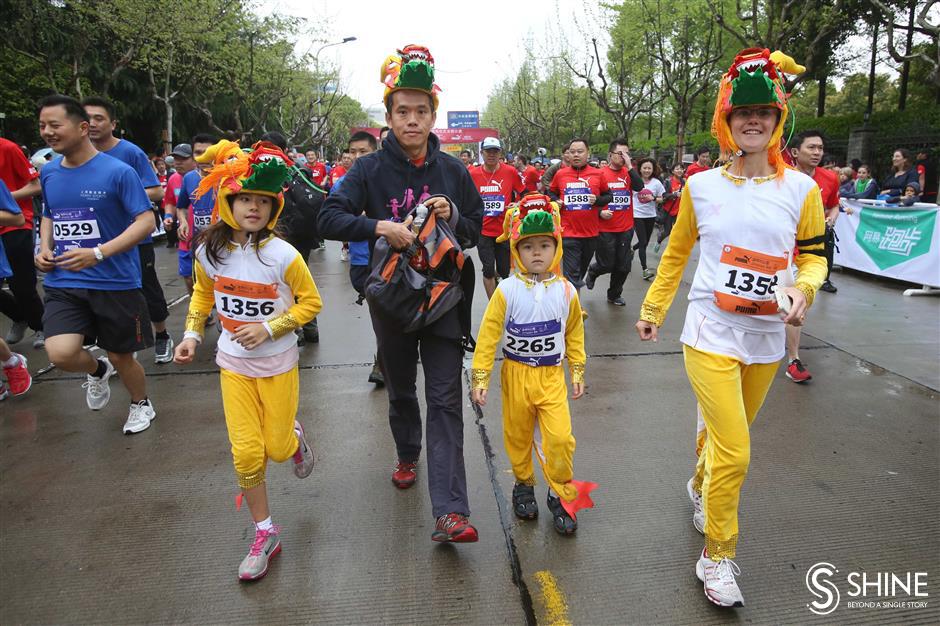 Long-distance runners from the Biyun Sports Leisure Center in Pudong take part in an outing.

There’s an old Shanghai saying: “People would prefer a bed in Puxi to a house in Pudong.” No longer. Nowadays, housing is as popular on the eastern shore of the Huangpu River as it is on the western banks, and foreigners are no exception.

In the last 25 years, when Pudong was undergoing phenomenal transformation from farmland to glittering metropolis, the expat population surged 125-fold to about 25,000 last year. That’s about 20 percent of all expats living in Shanghai.

Curt Larson, assistant head of School for Finance at Concordia International School Shanghai, has been living in the city for 25 years, all but three of them in Pudong. He still expresses amazement at what he witnessed in the evolution from paddy fields to Jinqiao’s modern green, developed area. 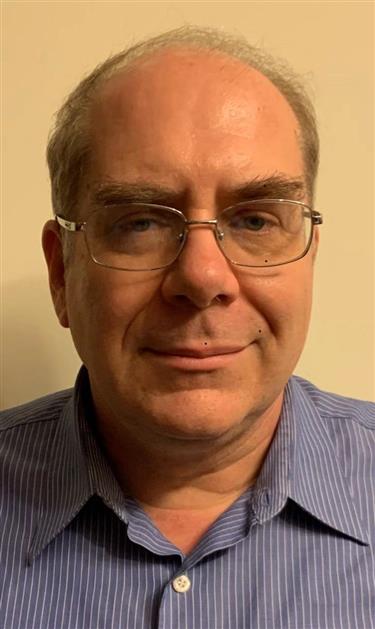 Although streets were paved, our school was located in a big field filled with grass, frogs and a pond. Thanks to the hard work of the Shanghai government and Jinqiao, it is now quite a remarkable place.

Larson told Shanghai Daily he first visited Shanghai when Pudong’s development was still just a dream on the drawing boards.

Concordia International School Shanghai, an international school with an American Curriculum, was founded in the Jinqiao area of Pudong in 1998.

“I moved to Pudong that year,” said Larson. “Although streets were paved, our school was located in a big field filled with grass, frogs and a pond. Thanks to the hard work of the Shanghai government and Jinqiao, it is now quite a remarkable place.”

The Biyun International Community in Jinqiao is often called a “mini-UN” because it houses more than 3,000 foreigners with many nationalities from across the world.

But things were a lot different when Larson landed there. Little housing was available in Jinqiao and only a couple of restaurants were open.

“The grocery stores were several kilometers away,” he said. “Currently, shopping is in walking distance, and anything can be quickly assessed through online platforms like Taobao. Home delivery has made a big difference to a quality lifestyle.”

Larson added, “The air quality has improved greatly, and the Metro system has made transport very convenient. It is a great place to live.” 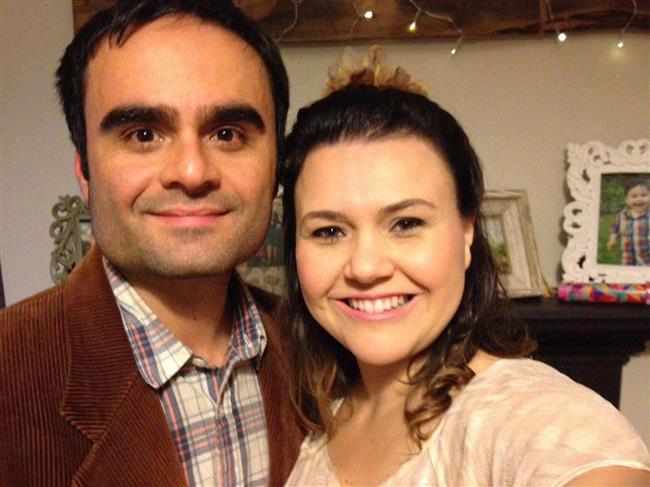 Andrisa Arruda and her husband

Newcomers lack experience of the dramatic contrast of the past 30 years.

Brazilian Andrisa Arruda, who came to live in Shanghai with her husband, a teacher, two months ago, said Pudong is simply a great place to live.

“I was under the impression that China would be full of buildings everywhere, with more skyscrapers than green areas,” said Arruda. “But Pudong has proven me wrong. The area so lovely, clean and well-kept, with lots of green spaces for my kids.”

She said her children’s school is not far from home, and a relatively new Metro station nearby puts her in easy access to all parts of Shanghai.

“You can go anywhere!” she said. “I do miss more shops near my house, but I can definitely buy anything online, so in the end, Pudong is very pleasant, affordable living.”

She added, “China is the future. How is it possible that so many people in the world don’t understand China’s capability and how life is here? There were so many stigmas attached to China before I came here, and everything is so totally different from those perceptions.”

Arruda said she would like to learn Mandarin so she can better communicate with local residents and more fully integrate in the community. 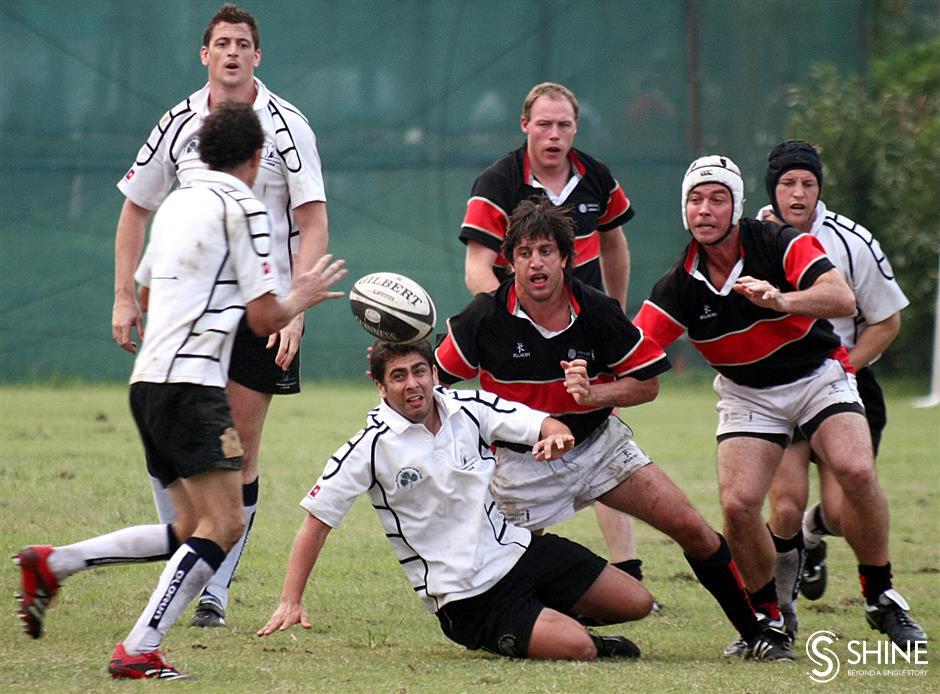 The game is on! Expats in the Biyun International Community in Jinqiao hold sporting events. The area is often called a “mini-UN” because it houses so many foreigners.

Pudong takes care of its expat community. Eighteen service centers catering to foreigners have been opened, and 59 professional social workers are on hand to assist them, enhanced by some foreign volunteers.

It all began in 2010, when Pudong police developed an online system for overseas people living in the area. They set up a service station in the Lianyang community, home to thousands of expats, in the Huamu Subdistrict.

When the city was enduring the outbreak of coronavirus earlier this year, social workers in the Lianyang service center dispensed information about the virus to the community and posted guidelines for expats on epidemic control and prevention on social media platforms like WeChat.

When everyone needed to book facial masks, the workers helped foreign residents through the process. Some expats, wearing masks, took selfies or made videos holding up placards promoting the use of masks and posted them online.

Russian Mishunin Ivan — a well-known community volunteer and professor at the Shanghai Conservatory of Music, who has since returned home — bought boxes of masks in Moscow and sent them to the Chinese embassy in Russia when the pandemic broke out.

‘Places for our daughter to learn to ride a bike’ 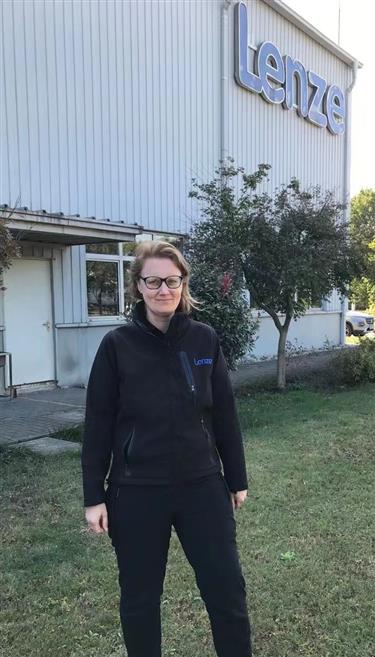 Stefanie Xia Bramekamp, vice president for human resources at Lenze Drive Systems (Shanghai) Co, is a German who has been living in Shanghai with her Chinese husband for 17 years. She’s now working in the Lingang area, the latest expansion of the Shanghai Free Trade Zone.

“During my university days in Germany, I spent one year in Hangzhou,” she told Shanghai Daily. “I was very interested in the Chinese language and culture, which is why I chose Chinese as my major.”

During her stay in Hangzhou in 1999, she visited neighboring Shanghai. At that time, the transport network was pretty rudimentary and it took her up to six hours by train to make the trip.

She moved to Shanghai in 2003, living in Pudong for about two years. Even at that time, amenities were pretty basic. There were only two shopping centers, Super Brand Mall and No. 1 Yaohan Department Store. The Oriental Pearl TV and Jin Mao towers were built, but they weren’t surrounded by the skyscrapers of today.

“You just had the feeling that Pudong was very flat, and the Lianyang Community where I’m now living had few amenities,” Bramekamp said. “Everything has changed so much. There are now so many shopping malls, theaters and recreational areas.”

She lived in Puxi on the western bank of the Huangpu River for several years, but after the birth of her daughter, the family moved back to Pudong in 2013 because they thought it more amenable for raising children.

“We found nice places where our daughter could walk and learn how to ride a bicycle,” she said. “As a young family, we really enjoy living in Pudong.”

I really like the subway. It’s so easy to use, even for foreigners who cannot speak Chinese. You can get everywhere very easily.

The Metro system has been greatly expanded since 2003.

“Now it’s more convenient,” said Bramekamp. “I really like the subway. It’s so easy to use, even for foreigners who cannot speak Chinese. You can get everywhere very easily.”

She praises government policies supporting foreigners, which are friendly in helping expats get through sometimes complicated residency procedures.

“Now it’s all very clear and easy to provide what is required by authorities,” she said. “And that has continued to improve over the years.”

Her parents during one visit were amazed that Bramekamp didn’t have to carry cash and could use her mobile phone to pay for purchases.

“When foreign visitors like my mother came here, we always had to go to the police station and personally register them,” she said. “But now it can all be done online.”

Her company was among the first group of firms to relocate to the Lingang area.

“At that time, we looked at a couple of places,” she said. “Lingang really attracted us because officials there shared their ambitious plans for the future, like infrastructure transport, educational facilities and housing.”

Bramekamp said she and her colleagues believe the company can thrive in such a welcoming environment. 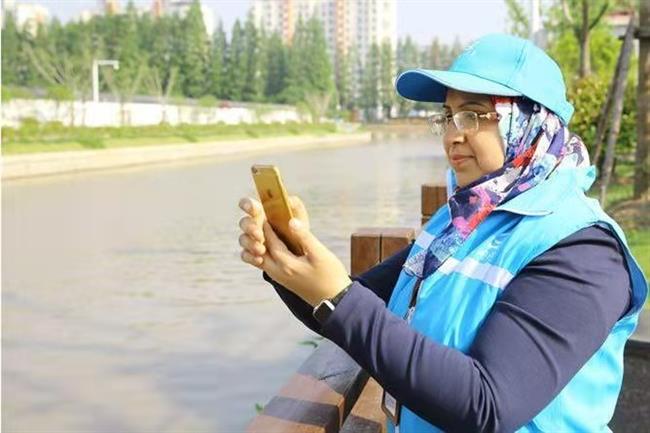 Aiza Kashif takes a picture during one of her river inspections.

Pakistani Aiza Kashif, 42, who holds a doctoral degree in pharmacy, lives in the town of Zhangjiang in Pudong. She has become active in community volunteer efforts.

Kashif was Shanghai’s first foreign “ambassador” in the city’s anti-drug campaign. She has done volunteer work in Metro stations, airports and at the first China International Import Expo. She now serves as a “river chief,” who patrols a stretch of the Chuangxin River twice a week to check for litter and water pollution.

When the coronavirus pandemic broke out earlier this year, Kashif and her family were on holiday in Pakistan. They decided to return to Shanghai, unlike many compatriots who fled the city to return home.

“People in Pakistan were very scared and told us not to return to China,” she said. “But my husband and I talked it over. Shanghai is our second home, and we knew the government was taking strict precautions.”

Once back in Shanghai, she did community volunteer work to promote the campaign to control the virus. She sent out messages to expats on social media, telling them: “Together, we can get rid of COVID-19, and offered tips on how to stay safe and healthy.

Her family first arrived in Shanghai in 2012.

“We looked at many houses in Puxi as well as Pudong,” she said. “But I preferred Pudong because of the international school there for my children. I don’t like lots of noise and traffic. Pudong is less crowded and noisy, and it’s very ‘green.’”

She points to the many trees, plants, stunning architecture and statues in Zhangjiang as proof of a livable environment.

“When I came to Shanghai, Pudong was already very beautiful,” she said. “But now I think it’s even more beautiful. The big Shanghai Tower wasn’t built at that time, but now I can see it from the fifth floor of my apartment building.”

“A few years ago, the air quality was poor during winters, and we had to wear masks when going outside,” she said. “But government efforts have cleaned up the air. Now I can see the blue sky.”

In 2017, she was invited to become a river inspector, a task she performs with relish.

“Water pollution threatens public health and is detrimental to plants and fish,” she said.

“The river isn’t always clean,” she said. “Garbage and other detritus are sometimes deposited on the banks or in the water. I take a photo and upload each offending scene on the app provided to me, and the government takes it from there. With our combined efforts, the river water quality is much improved.”

‘The community is very welcoming and not too noisy’ 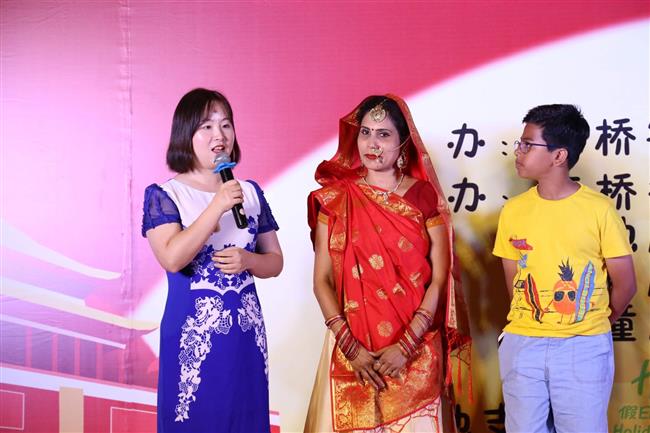 Indian Veena Amod Meshram, 46, has been living in Kangqiao in Pudong for three years. Her husband is a project manager with a multinational company.

His work previously took the family to Beijing and Singapore, but Pudong captured their hearts like no other foreign posting.

“The Pudong New Area is well organized, with vast infrastructure and good Metro connections,” Meshram said. “In fact, Kangqiao will soon get a new Metro line. Living in Pudong is nice and relaxed. My son’s school and my husband’s company are nearby. This community is very welcoming and not too noisy.”

She said community support has helped a lot. That was especially evident when the pandemic broke out. In spite of language differences, local people kept her up-to-date with information on the virus, precautions and guidelines.

Meshram said she learned how to use Chinese apps for buying food and daily necessities during the pandemic. Deliveries arrived at the community gate in a timely fashion.

She said the international school her 10-year-old son attends is very good and took all proper precautions during the virus outbreak. That eased her anxiety.

The streets are clean and society is well-ordered, she said. The transition to trash sorting went off without a hitch because community workers clearly communicated the new rules to expats. 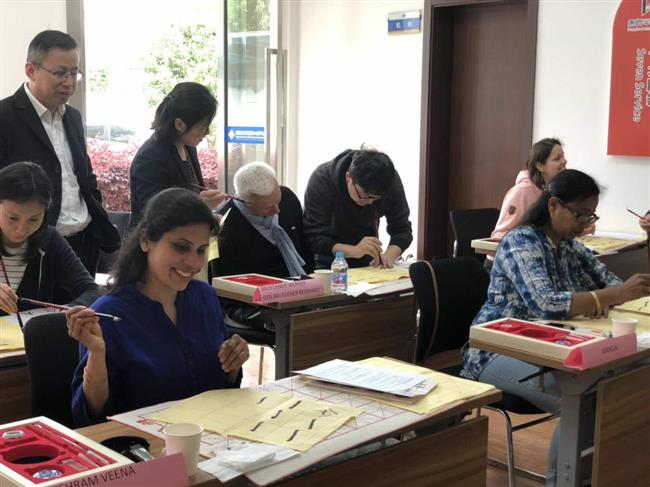 Veena Amod Meshram participates in a calligraphy class organized for foreigners by her local community.