Through the looking glass: How we coped in an extraordinary year

Vaccination against coronavirus has started in China, while sporadic cases of the disease are still popping up in some cities. Is this the beginning of the end? Do we face a different lifestyle from the past as 2021 dawns?

As we bid a not-so-fond farewell to 2020, it’s clear that coronavirus will always color our memories of the year.

I am reminded of its far-reaching effects when I visit a friend. She is putting a pink mask on her 14-month-old daughter.

“She was pretty much born into the world of masks,” her mother said, adding that her 8-year-old son is always asking for his mask, even after briefly taking it off for a haircut.

To children, coronavirus has become an ingrained part of daily life, even as their elders pine for the days before the onset day of the pandemic.

The virus has cost untold lives and bred so many personal tragedies. We all suffer from COVID-19 fatigue, but the virus doesn’t care how we feel. However, it has galvanized us to adapt and do some serious thinking.

The pandemic fostered the “gig economy” of independent workers and online services.

It highlighted social needs, like the digital gap of the elderly.

It enforced new habits upon us, like frequent handwashing and the use of serving utensils instead of common chopsticks.

It encouraged people from all regions and walks of life to try their hand at livestreaming videos.

It affected parenting, and stirred debate about personal privacy and the future of cinemas.

Shanghai Daily picked some of the trends that marked this extraordinary year. 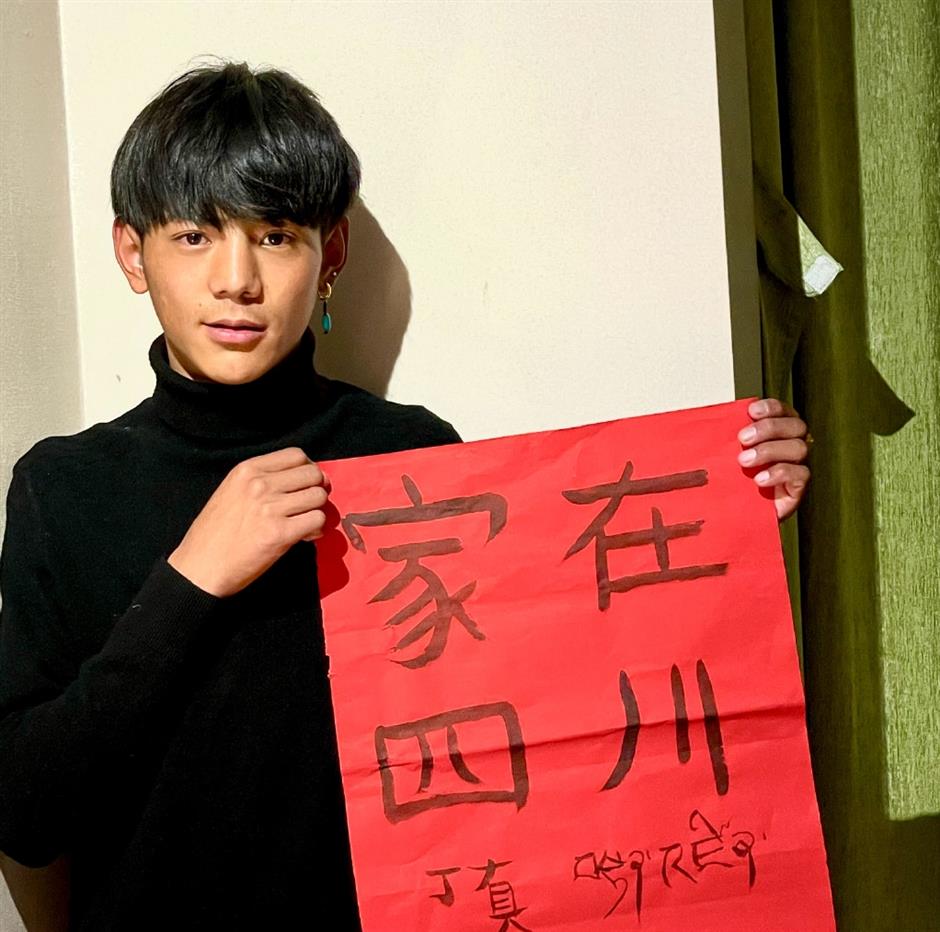 In the digital age, ordinary people can become famous overnight. But nobody expected the trend to be so far-reaching and as pervasive as it was this year.

One prime example is a 20-year-old Tibetan herdsman who inadvertently became an instant online sensation.

The handsome young man appeared in a seven-second video intended for his brother. It went viral, with nearly 3 million “likes” on the Douyin platform in less than three weeks. Even his favorite pony Pearl attracted more than 80,000 fans.

Some of Tamdrin’s new fans started to worry that their new idol might be exploited, but the humble man was not seduced by fame. Instead of signing up with a talent agent and going on TV like most other online sensations, Tamdrin chose to become a tourism ambassador for his hometown Litang County in a Tibetan autonomous prefecture in Sichuan Province.

As a result, a local culture and tourism promotion company hired him as a full-time employee, with a monthly salary of 3,500 yuan (US$538).

The company posted pictures and videos of him learning Mandarin and Chinese characters, prompting fans around the country to send him hundreds of textbooks.

Subsequent videos highlighted the life of a herdsman — tending yaks, racing horses, praying in temples, singing love songs and tasting local cuisine. They were set against the breathtaking views of his hometown.

Within 10 days, his soaring popularity led online searches for his county to increase more than six-fold on the website of Ctrip.com. It also inspired many netizens to discuss the living standards of the area, which had officially emerged from poverty only earlier in the year.

Tamdrin was only one among thousands of small-town, ordinary people who found a new voice on the Internet, deliberately or by accident.

Many villagers across China discovered livestreaming as a way to promote their traditional culture or pursue business opportunities. In one case, prices for the produce of a little-known farmer were reported to have increased 20-fold.

Local authorities even held training sessions and some provided loans for villagers so that they can have access to livestreaming equipment.

Shanghai residents recently discovered that their health QR codes now show only one character of their names, instead of the full names.

The change reflects a new emphasis on personal privacy in a digital era where such information can be disseminated and exploited by others.

New laws on privacy protection are in the works.

They come in response to reports of information leaks about COVID-19 patients and their close contacts, triggering some harassing phone calls and text messages.

Most recently, a court in the southwest city of Chongqing issued the nation’s first ruling on privacy infringement related to coronavirus. A list of names of people who had had contact with virus-infected, cold-chain food was leaked by the distribution company.

The court ruled that the company must apologize to the plaintiff and pay 1 yuan for “mental damage.” It was viewed as a symbolic punishment.

The new Civil Code that comes into effect tomorrow delineates what constitutes private information and regulates its use.

Authorities in various administrations have launched policies to broaden privacy protection, especially related to collection and use of information by mobile apps.

The Ministry of Industry and Information Technology recently completed technical analyses of 440,000 popular apps. Of them, 1,336 were found to have privacy violations, and 94 of the most egregious offenders were removed from app stores.

A platform to monitor apps via big data and artificial intelligence technology is being created, with the aim of checking 1.8 million apps in 2021.

The ministry said the country now has more than 3.5 million apps. 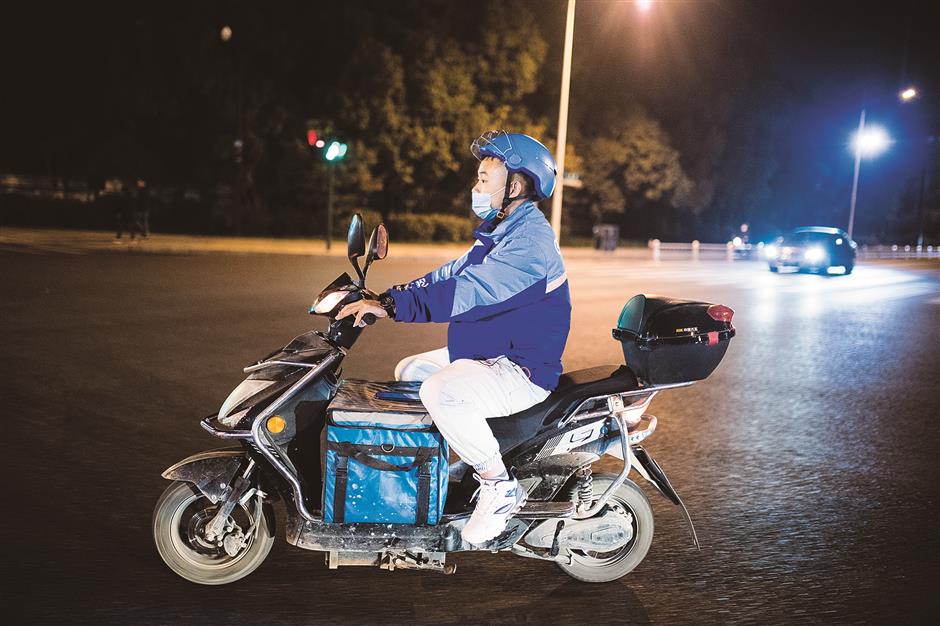 A deliveryman rushes with food to be delivered.

The changing environment of work

Coronavirus caused a proliferation of “flexible employment” plans in Chinese companies. A survey found that about four-fifths of companies embrace the idea and 73 percent have already adopted such plans.

Flexible employment includes sharing workers and the expansion of so-called “gig workers,” such as freelancers who drive for online car-sharing platforms like Didi or working as deliverymen. Many gig workers come from the ranks of those who have lost jobs to the pandemic.

Employee-sharing became a go-to solution for companies that wanted to retain employees despite financial difficulties in the early stage of the pandemic.

The ascendancy of the gig economy has raised issues of workers’ rights. The Ministry of Human Resources and Social Security responded with guidelines to protect workers involved in employee-sharing plans.

An angry father in Shanghai nearly caused a serious fire when he set his fourth-grade son’s homework on fire. Apparently, he was helping his son with school lessons when his frustration turned to anger.

The incident reminded many people of the story about a father in Jiangsu Province who quit a WeChat parents’ group when teachers required parents to check their children’s homework.

Incidents like these and constant online chatter reveal that many parents are frustrated with school homework demands and the burden it places on both children and themselves.

Chinese parents are known for their obsessive dedication to children’s education, and school closures and the shift to in-home learning during the pandemic squarely transferred many responsibilities from teachers to parents.

School closures also forced parents to struggle to find activities to keep their children busy at home. It was a strain for many. 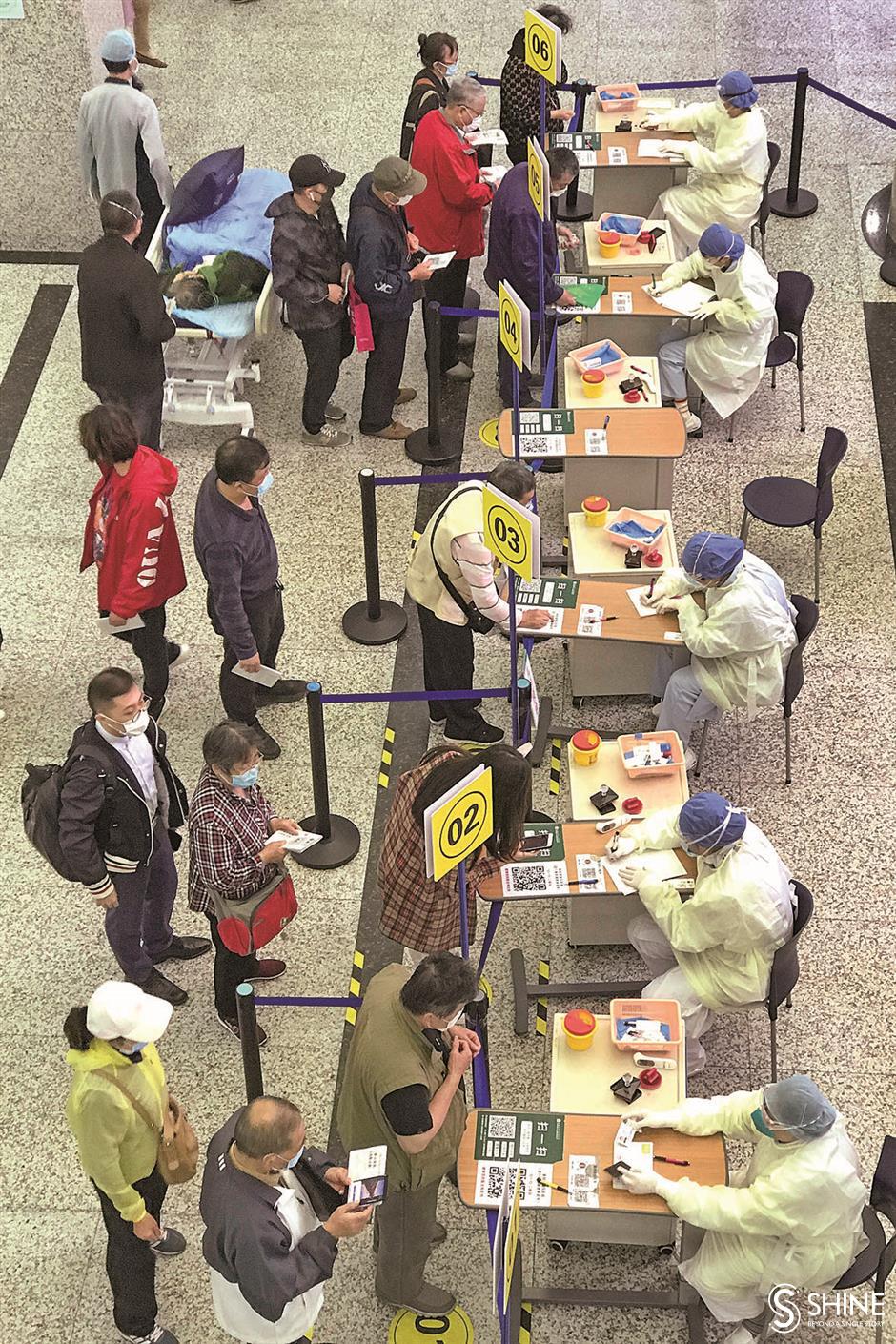 Health QR codes can be a challenge for some elderly patients.

The elderly lost in cyberspace

Many senior citizens took to social media platforms to show how they dance or do exercise activities, dispersing a bit of acquired wisdom along the way. Some became Internet celebrities overnight.

But amid such heartening insights into old age, the depressing side of that life also emerged. The public’s attention was focused on elderly people passed by in the digital age.

For example, health QR codes on phones are required for entry almost everywhere. Hospital visits require online reservations, and groceries and other daily necessities are usually deliverable only through mobile apps. Seniors without digital savvy are left out in the cold.

Less than 7 percent of China’s 900 million Internet users are 60 years or older. Many don’t own smartphones, while some have no mobiles at all. Some rely on younger relatives to help them through digital technology, while many who live alone are left helpless.

In Shanghai, the health commission unveiled a series of measures to make hospital services more convenient for those 70 years or older. Medical facilities are now required to provide priority windows for the elderly and to simplify reservation systems.

Last week, the Ministry of Industry and Information Technology announced a series of measures to help bridge the digital gap.

Major mobile manufacturers like Huawei, Xiaomi and Vivo have announced that they will provide an “elderly mode” on their phones, with larger texts, higher volumes and remote assistance services.

Mobile app providers like Baidu map or Douyin announced they are adding local dialects in vocal-recognition systems and easy-to-understand training videos catering to the elderly.

Movie theaters finally reopened after nearly six months. Those in the industry worried about the fate of cinemas until the first blockbuster of the year was screened late in the year.

The epic war movie “The Eight Hundred” amassed a box office of over 3.1 billion yuan, bringing the receipts of China’s film market to an estimated 20 billion yuan this year.

That may look like a hefty income, but it was only about a third of last year’s revenue.

Box-office receipts were hurt by the closure of cinemas on the entire Chinese New Year holiday, normally the industry’s biggest money-spinner.

The film was originally scheduled to open on Chinese New Year’s Day in cinemas. Instead, it became the first online premiere of a big-budget movie, much to the consternation of theater owners and employees.

The movie streamed more than 600 million times within the first three days of its uploading and hauled in considerable advertising revenue as users interacted with the apps.

Many movies followed suit in this new model of delivery.

The recent online premiere of “L.O.R.D: Legend of Ravaging Dynasties 2,” by writer and director Guo Jingming, added fuel to the debate about the future of movie theaters.

Unlike Xu’s movie, which was streamed for free, “L.O.R.D.” on Tencent’s video platform charged 24 yuan per view, or half price for subscribers.

According to estimates of viewership, the movie earned 300 million yuan within the first six hours. It has been viewed more than 100 million times, despite a poor rating of 3.2 out of 10 on movie review site Douban.com.

Most puzzling is the fact that the first movie in Guo’s series, which premiered in 2016, was a flop in theaters, with equally poor ratings.

The debate about cinemas goes on. Will people go out to the movies in the new year? Let’s wait and see. 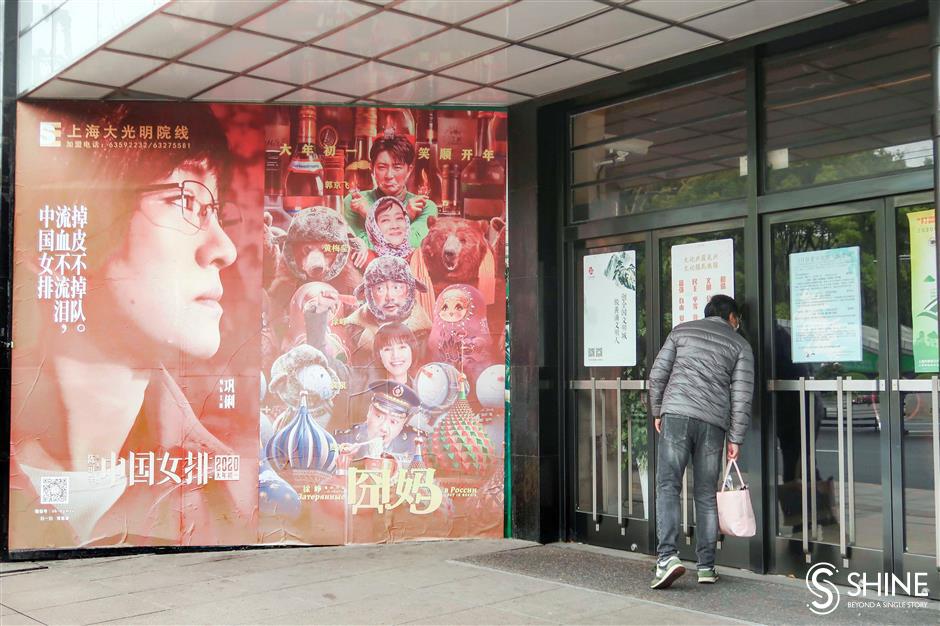 A man looks through the doors of the Grand Theatre on Nanjing Road W. early this year.

Special Reports
ADVERTISEMENT
Let an umbrella be your smile! A town with plenty to be happy about
Boys vs girls: It's hard to shake old ideas
Ever-evolving trends in cuisines and wines
How to tell opinion from fact: Do you live in a world of two realities?
Animal adoption as of January 24
Ordination terrace stands strong as a symbol of Buddhist faith
Cong's Kitchen brings out nostalgic local flavors
Mural an inspiration for latest shadow puppet show
China film market a marked global triumph
Interactive plays inspire children with cognitive disorders
EXPLORE SHINE