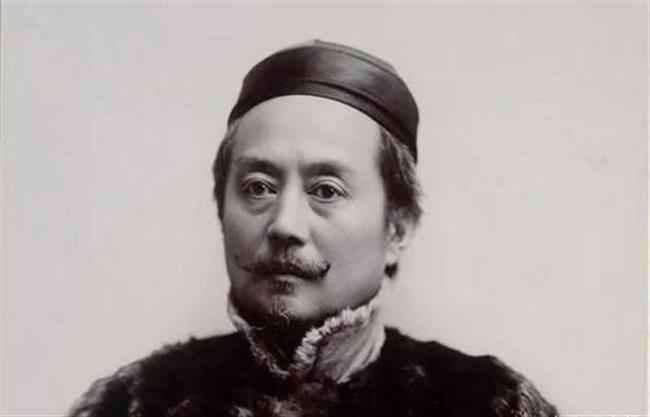 The best English literature professor at 1920s Peking University was also a stalwart defender of Confucius in a time when most of his students and colleagues were drawn to new Western concepts.

Gu Hongming (1857-1928) was fluent in English, French, German and Russian, and was versant in Latin, Greek and three other foreign languages. He studied literature, civil engineering and law in various European countries.

Yet despite his worldly knowledge, he wore his hair in the traditional queue style of front and sides shaved, with a long braid down the back. He also dressed in traditional clothing when short hair and Western suits were already mainstream fashion.

“My queue can be seen, and yours are in your hearts,” he once responded to students who laughed at his hairstyle.

In the years of debate over the future of China in the post-dynasty period, Gu argued for a Confucian-based monarch, where the monarch would fulfill what constitutes a “saint” according to Confucian thought.

That concept was generally considered backward and ultraconservative in the Republic of China that was founded in 1912 to replace the toppled Qing Dynasty (1644-1911).

My queue can be seen, and yours are in your hearts.

Gu Hongming responded to students who laughed at his hairstyle

The strangely paradoxical image that Gu presented was the Chinese gentlemen in Leo Tolstoy’s 1906 “Letter to a Chinese Gentleman,” in which the Russian writer wrote that he was touched by the books on Chinese wisdom written and sent to him by Gu.

He was also the Confucian scholar who fascinated writers like Somerset Maugham, Rabindranath Tagore and Ryunosuke Akutagawa when they traveled to China.

Gu often debated with Westerners in English-language newspapers, questioning what he considered shallow modernization at the expense of culture.

He held that there was “very little difference” between the East of Confucius and the West of Shakespeare and Goethe, arguing that true civilizations were distorted and threatened by false liberalism and materialism.

His writings in English were translated into German and French and were quite popular in post-World War I Germany. In 1920s, his articles and interviews with him were also published in major American media like “The New York Times.”

German writer Oscar Schmitz, who translated Gu’s “The Spirit of the Chinese People” into German in 1916, wrote in the introduction that Gu “belongs to the very rare characters who are free from nationalist narrow-mindedness as well as from characterless internationalism.”

In this widely translated book, Gu pointed out that understanding the Chinese civilization requires someone to be broad-minded, simple and deep.

Gu added that one more characteristic is essential to an understanding of the Chinese: “Delicacy to a preeminent degree such as you will find nowhere else, except perhaps among the ancient Greeks and their civilization.”

Later, he described “the spirit of Chinese people” as “the Chinese style of humanity” — “inexpressibly gentle” and a combination of sympathy and intelligence.

Gu then explained how such gentleness came about, with references from both Chinese classics and Western philosophers like Matthew Arnold, Goethe and Thomas Carlyle. 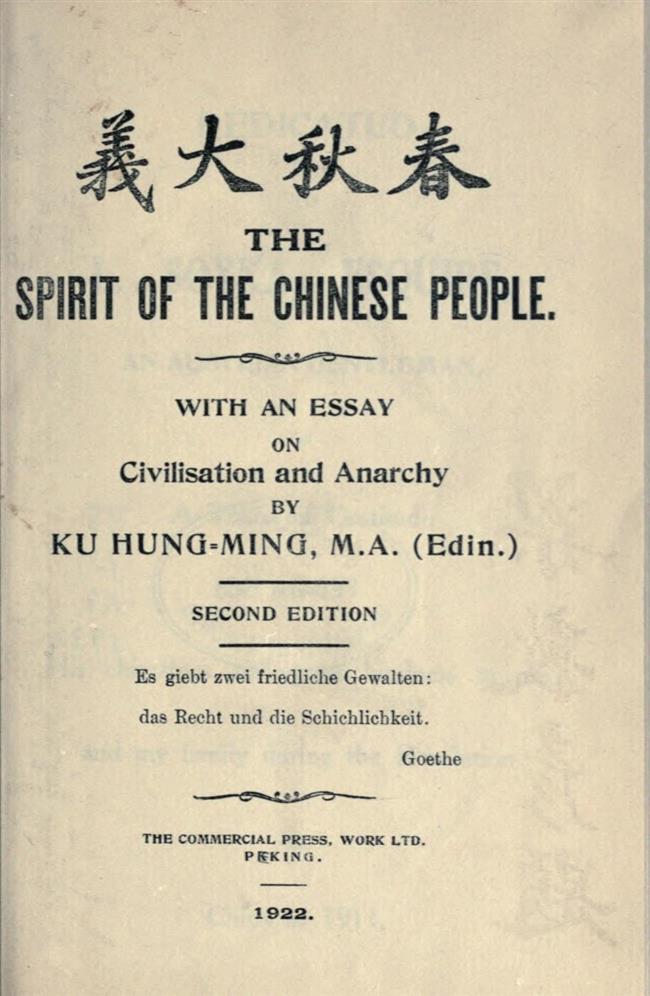 Gu Hongming’s “The Spirit of the Chinese People”

In his translations of Chinese classic texts, he often cited Western references to make it easier for readers to understand. Gu argued previous translations of the classics by Western missionaries were wrong and created a poor impression of Chinese culture in the West.

According to some reports, his English translation of Chinese classics, including “The Discourse and Sayings of Confucius” and “The Universal Order or Conduct of Life,” sold over one million copies worldwide.

But back home, he was often described as “extremely conservative,” or an eccentric nationalist, with his strange images and out-of-date views, like defending concubinage and female foot-binding.

Many prominent intellectuals accused him of being a monarchist, while others ridiculed his appearance, saying his hairstyle and clothing were merely to attract attention.

Lin Yutang (1895-1976), one of the most influential Chinese writers of that era, praised Gu’s intellect, though he wasn’t a fan of his ideas.

In Lin’s memoir, he recalled Gu as “a crank but not a bore, for his was a first-class mind and he had, above all, insight and depth that no man in my generation had. No man in China wrote English the way he did.”

Some historians attribute the disparity between Gu’s domestic and overseas receptions to the fact that European intellectuals were disillusioned by modernization, especially after World War I, while China was only starting to embrace it. Gu happened to be a rather untypical Chinese of his time.

In fact, he was not a fully ethnic Chinese, and he only started learning Chinese language and culture in his 20s, after more than a decade of studying in various European countries.

Gu was born in British Malaya to an ethnically Chinese father, who was a rubber plantation manager, and a mother of Portuguese blood. He was taken by the plantation owner to Scotland at age 10 and earned a master’s degree from the University of Edinburgh 10 years later.

For the next three years, Gu traveled and studied in other European countries, including learning civil engineering at the University of Leipzig in Germany and law in Paris.

In 1880, he returned to Malaya, where he met a Qing Dynasty official who had studied in Paris and wanted to introduce some Western reforms to China.

This encounter inspired in Gu a desire to go to China, his spiritual home. He started leaning Chinese classics and started writing English articles about Chinese culture in the “North China Daily News.” In 1885, Gu finally went to China, where he was recruited as a foreign secretary to Zhang Zhidong, one of the most influential politicians in the late Qing Dynasty. Zhang advocated controlled reform in China.

Gu worked as his secretary and confidant for 20 years, and featured Zhang in “The Story of a Chinese Oxford Movement” after Zhang died. He compared Zhang with members of the high church of the Church of England who argued for the reinstatement of older Christian traditions of faith.

Gu believed there was “very little difference between the East of Confucius and the West of Shakespeare and Goethe,” contending that these “true civilizations” were distorted and threatened by false liberalism and materialism.

In recent years, interest in Gu has been revived. His English translations and writings have been reprinted and are available on Amazon.

Legendary tales about him were dug out on Chinese social media, and some of his quotes about the virtues of Chinese culture are interesting footnotes to the current stress on traditional heritage.