Tales of friendship between China and Laos

A doctor, a sports professor, an office worker and an entrepreneur from Shanghai – what they share in common is that all of them have served Lao people as volunteers.

With the launch of the railway that links China and Laos, the foursome fondly recalled their experiences in the neighboring country during a roundtable held recently in Shanghai.

The golden temples amid gray-tinted buildings and the exuberance of tropical Vientiane are still sweet memories of Shen Xiaoyuan, a doctor from Shuguang Hospital and vice director of the National Monitoring Center of Medical Quality at Traditional Chinese Medicine Hospitals.

Shen was one of the first volunteers sent to Laos back in 2002, but her six-month stay in this Southeast Asian country meant even more to her.

The mission was to provide medical services to local people alongside her Lao colleagues and to train local medical workers. But the work proved to be challenging from the very beginning.

"We would not be able to gain the full trust of local patients if we couldn't communicate with them in their language," she said.

With the help of local colleagues, Shen and her fellow volunteers were soon able to talk to patients without the presence of Lao doctors, but they were yet to be fully accepted by the locals.

"As we were not accustomed to the cuisine, we always had instant noodles brought from China. But then we found that only by living the way of the locals would we get their full recognition," she said.

Shen's work took her to some remote villages where she treated poor people. Her colleagues gave her a Lao name, "Dorhak," which in local language means "the flower of love."

"For my role, I was an ambassador of friendship from China to the Lao people and. Through me and my fellow volunteers, the locals saw a modern China with strong will to share its future." 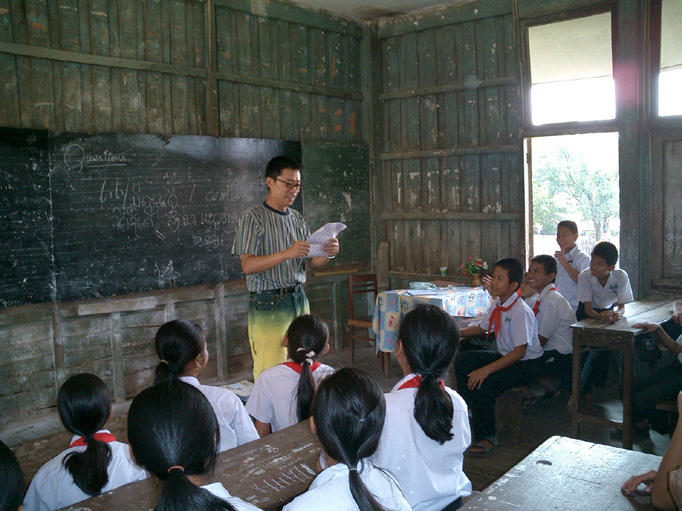 Shen is one of a group of 119 people from Shanghai who have worked as volunteers in Laos in the past 19 years, assisting the country in many ways. Apart from medical services, they also helped locals develop various skills and grow their economy.

Sun Wei, an associate professor of Shanghai University of Sport, might be the most famous Chinese volunteer ever in Laos. Becoming the coach of the national men's basketball team during his time there, he led the team to its first win and historic entry to the quarterfinals in the 2017 regional championship.

Sun said he was inspired by his players.

"With no indoor basketball courts with floor panels, and no professional gyms for strength training, the country lags behind even some Chinese schools," said Sun.

"But I was touched by their sheer love of the sport, and this was what bound my heart to theirs," he added. Sun coached the team for free and often used his own money to buy basketballs.

After the success in the regional championship, Sun said he was often stopped by local people in the street calling him "Coach Sun" and asking to take pictures with him. Before he returned to China, the players gave him a basketball jersey numbered 1 as a gift.

"I believe it was more than a gift to me as an individual, but one that honors all Chinese volunteers to Laos and China as a friend to the Lao people," Sun said. "I'm very proud of what we have done for them."

The people-to-people exchange between China and Laos is reciprocal. Some Lao students and professionals who have been aided by Chinese volunteers have gone on to study or develop their careers in China.

Representing Lao students who study railway technology at Shanghai Institute of Technology, Likhamsoukyiaseng Tong, whose Chinese name is Li Dong, shared at the roundtable his experience of living in Shanghai.

Arriving in September 2019, Tong worked as a volunteer for the second China International Import Expo in Shanghai in November that year.

"At first I was not sure if I could really help people, but by working together with Chinese volunteers I made it, and with that I really appreciated their devotion," he said. "Helping other people makes one really happy."

Tong is thankful to the Chinese volunteers who have helped his compatriots.

"There's a phrase in our language that goes 'Gratitude is expressed through hard work'," he said. "Keeping this in mind, I'm sure we will work toward building tighter links between our two countries."

Also participating in the roundtable was Chen Jing, vice chairperson of the Standing Committee of Shanghai People's Congress and president of Shanghai People's Association for Friendship with Foreign Countries. Chen was secretary of Youth League Shanghai when the organization took over the Laos volunteer program.

He visited Laos twice, in 2002 and 2003, and his wife was one of the Chinese volunteers there.

"On both my visits, we wanted to go to Luang Prabang, a historic city with high cultural value, but due to the inconvenience of traveling within the country, we had to drop the idea," he recalled.

"The new railway will enable more people to discover the country and pave the way for future people-to-people exchange between our two countries."

Chen suggested that online communication between Chinese and Laotians be used during the COVID-19 pandemic to sustain the exchanges. He hoped that the best practice yielded from the volunteer program be applied to similar programs for other countries in the future.