The man who restores the splendor of a historic zone 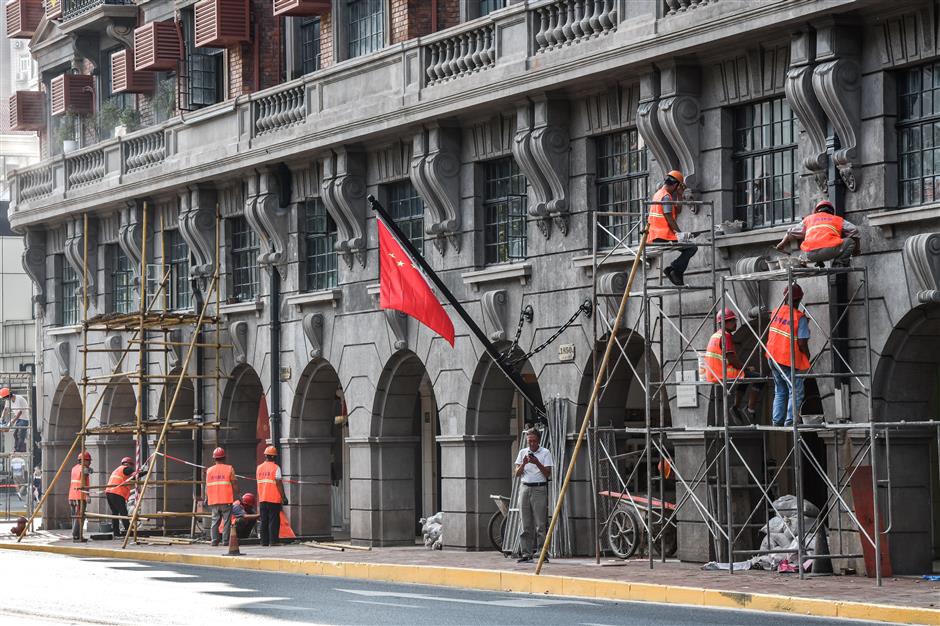 Workers renovate the Normandie Apartments during the latest facelift of the iconic building.

The excellent preservation of Shanghai's largest historical conservation zone is credited to Gu Zhifeng and his colleagues, who have been repairing old buildings in the downtown for more than two decades.

Gu, 45, is the leader of the historic building repair team of the Shanghai Xufang Construction Industry Co.

The 28 technicians in the team are responsible for the maintenance and renovation of the Hengfu (Hengshan-Fuxing Road) Historical Conservation Zone in Xuhui District.

When repairing a leaking historical building or refurbishing the former residence of a celebrity, the team members impart traditional techniques to construction workers while overseeing the preservation work.

Many landmark structures, such as the former residence of Madam Soong Ching Ling, the Xujiahui Cathedral and the Normandie Apartments, have taken on new looks after being renovated by the team.

"We're not merely whitewashing the walls or fixing the stairs," said Gu. "We learn the history and culture of each building to restore their 'warmth'."

Gu, dubbed the "guardian" of the Hengfu historical buildings, has been titled the "chief technician of the city."

Hengfu is the biggest historical conservation zone in Shanghai. More than half of the downtown region, covering a total of 7.66 square kilometers, is in Xuhui District and covered by Gu and his colleagues.

The Xuhui part of the Hengfu area, known as the "birthplace of Shanghai's culture and history," has 950 outstanding historical structures, 1,774 preserved historical buildings and 2,259 normal antique structures.

They include thousands of historical villas as well as many former residences of men of letters as well as celebrities. 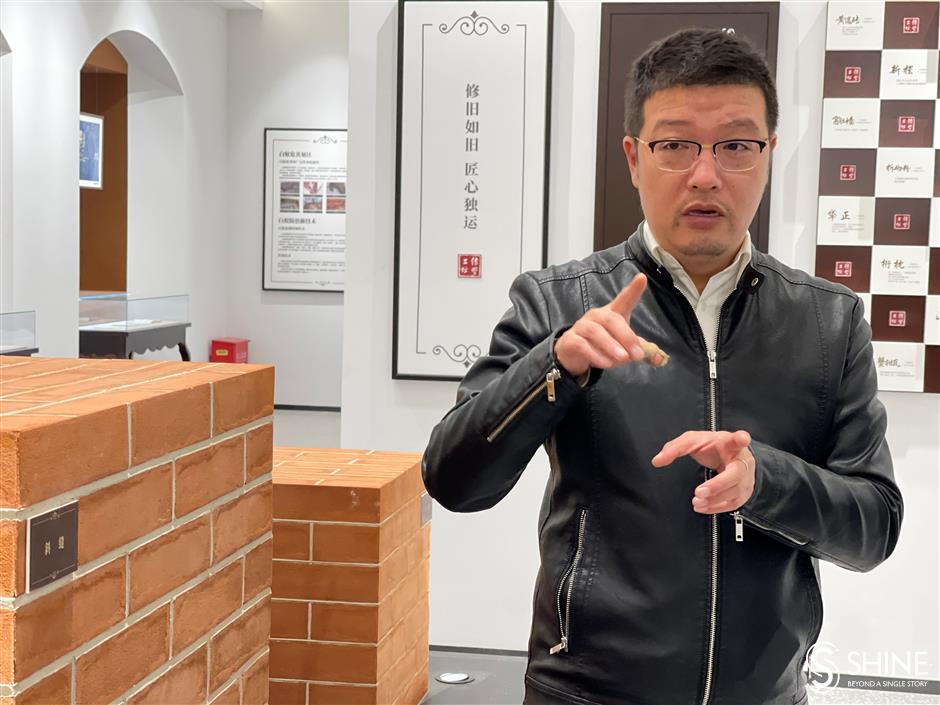 Gu was born in a traditional lane-style neighborhood of Shanghai. He said his birthplace has created special emotional bonds between him and historical houses.

He was recruited to the Xufang group in 2001 to repair residences under the jurisdiction of the company.

"Old houses involve the stories of their owners," Gu said. "We should repair the houses and recover the history."

At the beginning of his career, he learnt various basic techniques of carpentry and masonry from senior technicians. He later focused on the traditional construction materials and building techniques of historical structures.

He took on his first project, the renovation of the Blackstone Apartments, in 2014.

The eclectic-style building on Fuxing Road M. was built in 1924 by American missionary James Harry Blackstone. It was called the "finest apartment house in China" with a foreign butler service, elevators and central heating, along with a tennis court, ballroom, restaurant and heated swimming pool.

The six-story concrete building, with 31 suites, was once home to the consul general of Switzerland, US marine officers and Xiong Xiling, then premier of the Republic of China (1912-1949). Foreign celebrities often hosted banquets or social events.

The ground level has been converted into a bookstore and cafe, while residents live on the upper floors. Under the supervision of Gu, two 130-square-meter apartments were connected to form the bookstore, while the former swimming pool and gym were converted into a café.

The original wooden windows with metal frames have been preserved. A former corridor, laid with iconic mosaic tiles, has become a popular site for online celebrities to take photos.

The renovation of the Xujiahui Cathedral was another milestone project of Gu and his team.

Formerly known as the St Ignatius Cathedral, the structure was once the largest cathedral in East Asia. It was designed by a British architect and built with funds from French businessmen. Construction began in 1906 and was completed in October 1910.

Before its closure in August 2015 for safety reasons, the roof had severe leakages and parts of the ceiling had fallen, disrupting prayer sessions and alarming visitors. 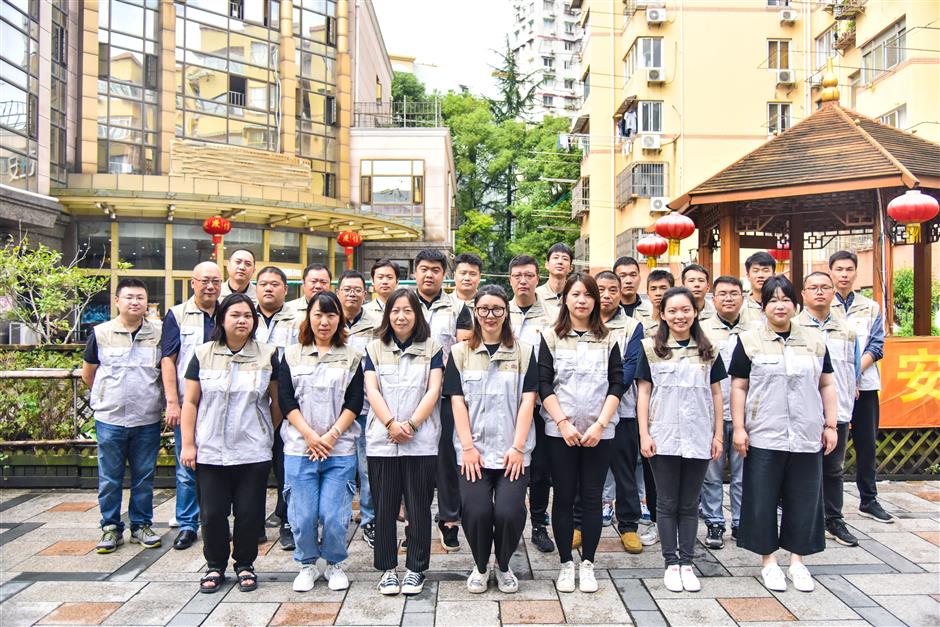 The renovation, which started in late 2015, repaired the leaky roof and damage from storms. The floor tiles and wooden floors which had been damaged by termites were replaced.

Renovators repainted the dome and the interior wall, and stabilized the wooden handrails. They also applied anti-termite paint to protect the building. The main altar and several smaller altars, which had been sealed off, have been refurbished.

The building's 150 windows have also been restored, with colorful paintings etched on the glass panels. To better preserve the cathedral, the renovators extended the length of the project from the initially planned nine months to two years.

In April 2018, Gu led one of the most eye-catching renovation projects in Shanghai of the iconic Normandie Apartments.

The red brick and concrete walls have been refurbished, while street shops below have been changed to blend in with the building's cultural heritage.

The city government also removed a cobweb of overhead electricity lines in the area to avoid spoiling the charm of the iconic building.

The renovation project has been designated one of the 15 best examples of historical building preservation in the city.

The renovation involved the use of unique "water-washed stones" and "fair-faced bricks" that increased wall waterproofing while preserving the historical look, Gu said.

His team carried out numerous experiments on various bricks to test the best washing method and invited an expert panel to ensure against missteps.

To prevent the old techniques from disappearing, Shanghai's first training workshop on renovation skills for historical buildings was launched by Xufang in December 2020.

The compound at 345 Shilong Road features an exhibition hall, a training room, an archive of traditional skills and several operational spaces. 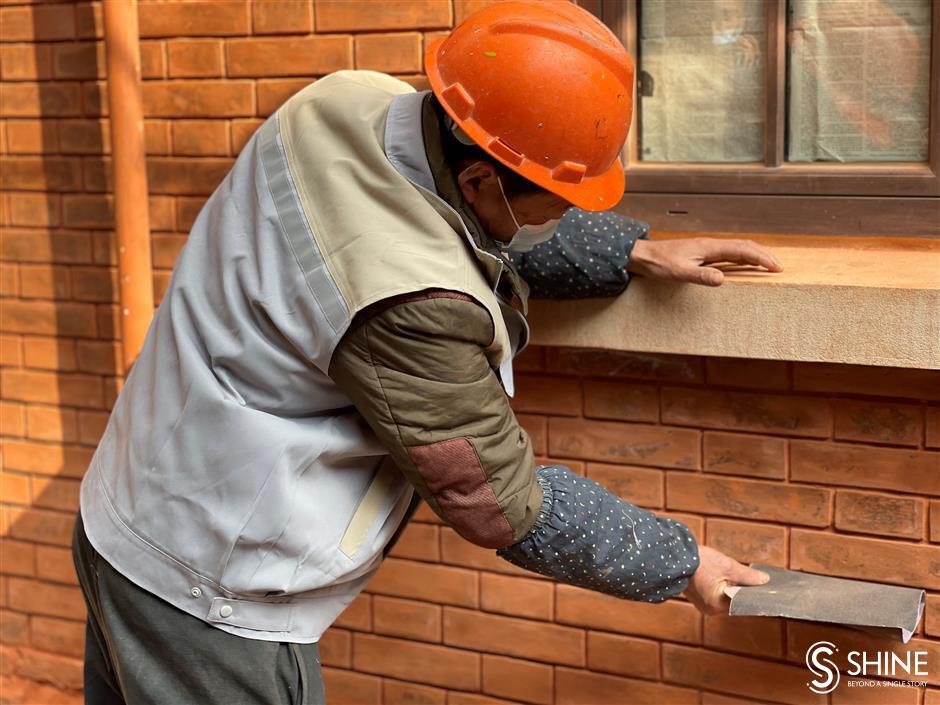 A worker weathers red brick at a shikumn (stone-gate) community in Xuhui District.

Construction workers can review previous renovation cases by Gu's team, such as the Xujiahui Cathedral, Normandie Apartments and the Blackstone Apartments, learn traditional repair techniques and practise their skills.

Retired and amateur technicians are invited to give lectures at weekends regularly.

Six typical stone gates of the city's unique shikumen (stone-gate) residences are on display at the workshop. These gates were duplicated based on the historical shikumen structures such as the Site of the First National Congress of the Communist Party of China with traditional techniques and materials.

Ten traditional repair techniques for the exterior walls of local buildings have also been collected. Some of the old techniques, such as the water-wash, fish scale, rough and cobblestone walls, are vanishing with the retirement of old generation masons.

The training base has listed as a pilot site open to all local construction personnel. 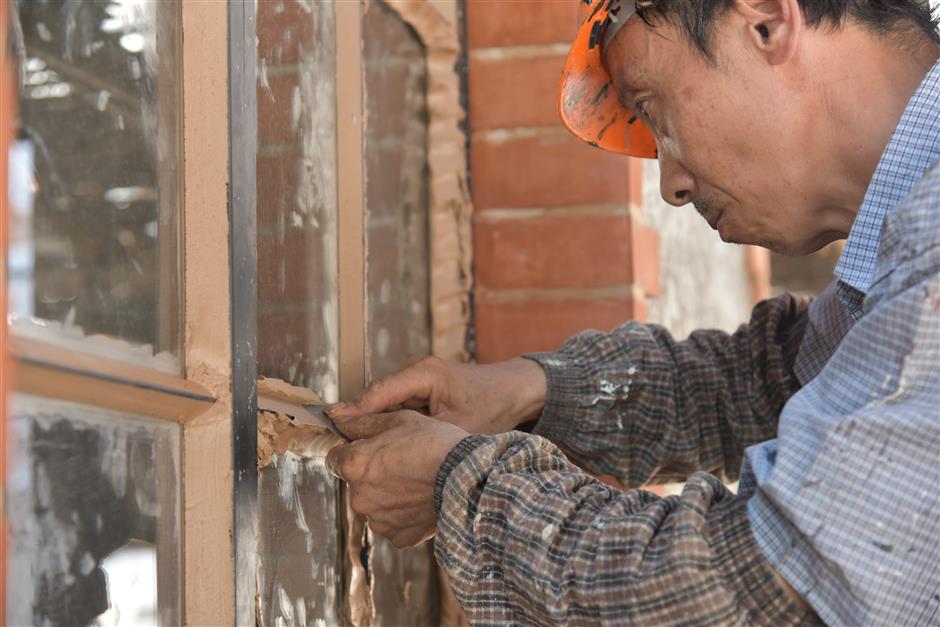 A worker learns to repair an old window at the training workshop of Xufang.