Holidays with your pet? More hotels gearing up to be animal-friendly 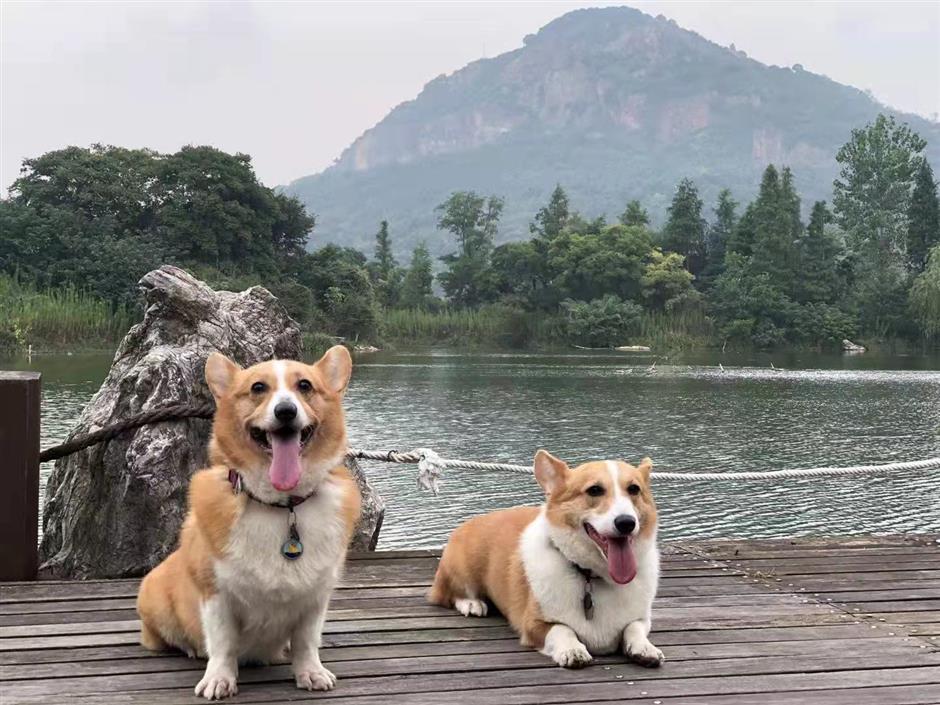 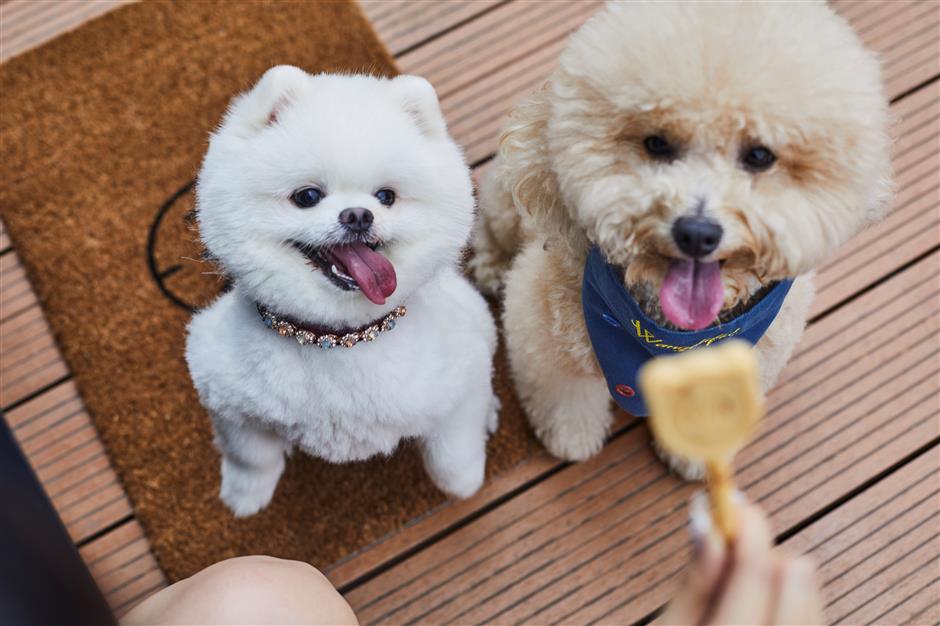 A pair of dogs are fed with snacks at a room in Middle House Shanghai.

For Isabella Wang, 30, a short vacation is sometimes a "sweet burden." The headache lies with her poodle. It's always a tough job to find a pleasant pet-friendly hotel in China, or at least a hotel that accepts pets.

The pet she calls "son" is deemed to be a member of her family and holds a position almost equal to her husband. She treats the dog with the best food, even more expensive than her cosmetics. The most important criterion of her hotel choice is always whether it allows pets.

"Nice view, supreme location, excellent service, cheap price? No to all of these if the hotel does not receive pets," she said.

"Because Du Du (the dog's name) can only accompany me for some 10 years, I don't want to leave him alone when my husband and I travel," she said.

The same headache is shared by Hao Ming who has raised a Bichon for five years.

During this year's Double 11 shopping spree, Hao bought nothing for herself but quite a lot of dog food and washing items for the pet.

Also, she bought some coupons for hotels that share one similarity – they're pet-friendly.

"I brought him along on almost every trip, but I needed to give up many good hotels or B&Bs because they are not pet-friendly," said Hao.

"I like traveling," she said. "Since I raise a pet, I always check whether the hotel is pet-friendly and then make a phone call for confirmation.

"Hotels that don't allow pets are not on my list of consideration," she added. 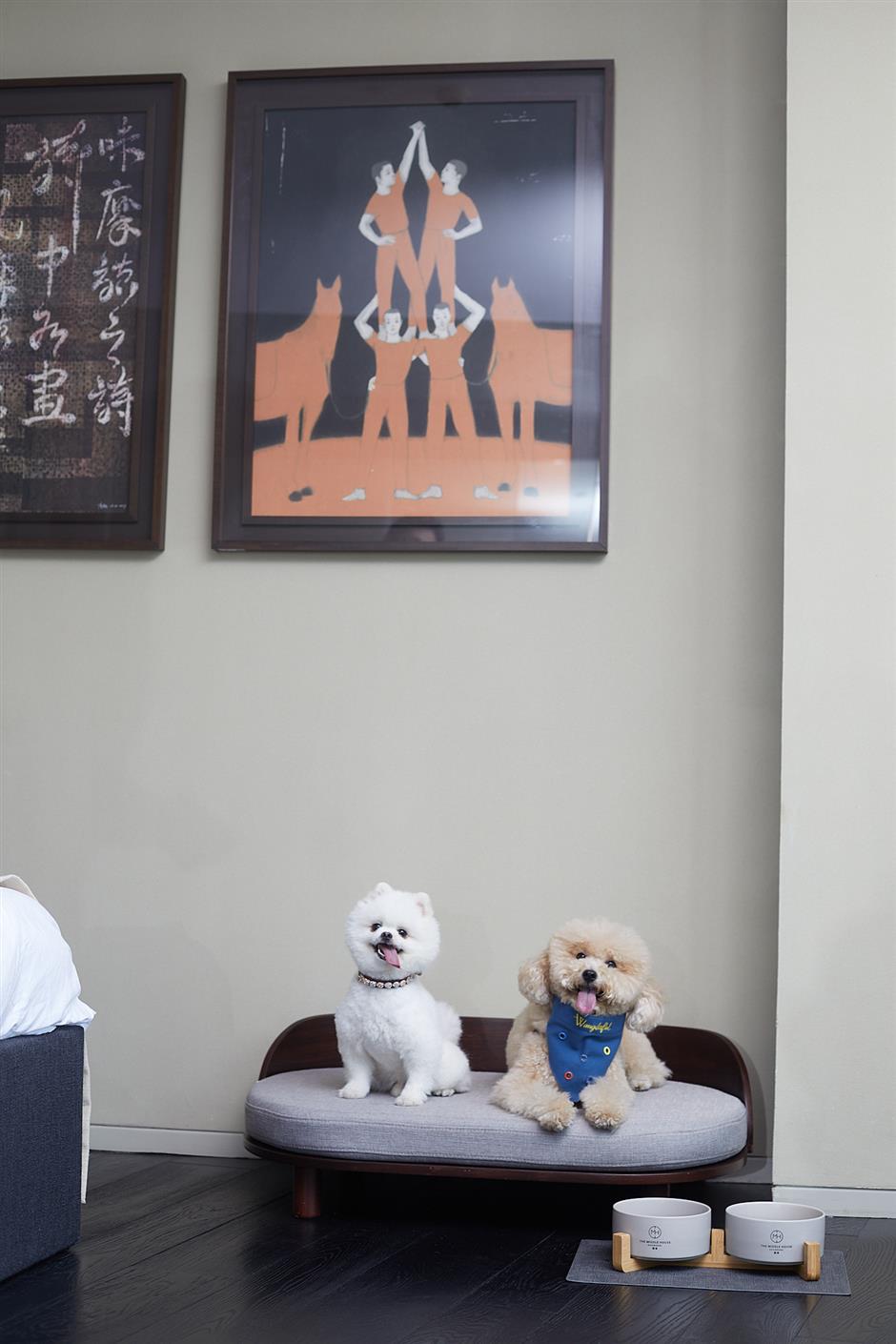 Two dogs relax inside a room at Middle House Shanghai. 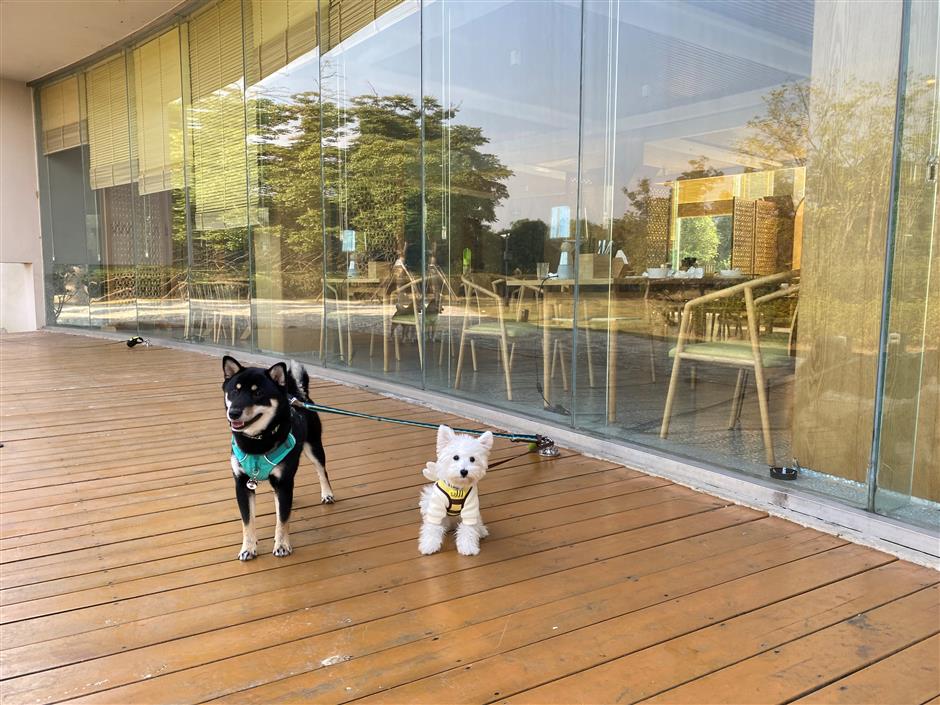 Two dogs at a hotel in Yangshan County

In Shanghai, only a few hotels and B&Bs are pet-friendly, and most of them are in the suburbs.

The prices for pet-friendly rooms are usually higher than ordinary ones due to extra cleaning and maintenance fees. Despite the additional charges that usually total several hundred yuan per room, these hotels still have a flourishing business on weekends. Booking two weeks in advance is needed sometimes.

However, despite the huge market demand, many hotels are reluctant to bite into the pet-friendly business.

W Shanghai ― The Bund stopped allowing pets in mid-September, and two outlets of the Orange Hotel, on Ruijin Road S. and Gongping Road, which used to be pet-friendly, made the same decision due to COVID-19.

"Some hotels receive pets because the operators raise pets themselves, but most don't consider them without enough preparation," said Zhou Renqi, a hospitality industry insider.

"There are several concerns," said Zhou.

"Some guests who don't have pets will object, and hotels don't want to get themselves in trouble. In addition, there are safety concerns and hygienic problems which push up operation costs."

In Shanghai, only a few hotels allow pets, and most are in the suburbs. They also apply restrictions.

Unlike many other hotels, it has a large outdoor space that is conducive to guests with pets.

In each room, there are sofas, toys and food for pets. In the garden, bags are supplied for people to clean their pets' excrement.

"Guests bringing pets to the hotel vary in age and they tend to treat pets as their family members," said Victoria Xu, the hotel's marketing communication manager. "They prefer taking a vacation with their pets on holidays and weekends."

The hotel has restrictions on pets' weight which should be at or below 30 kilograms and their owners need to show relevant licenses, such as vaccination, before entry. Owners are banned from taking dogs into indoor public areas such as the restaurant, gym or billiard room.

They should not use the bathroom in the room for shampooing or washing dogs. They need to sign a consent form before booking in.

"Pet-friendly hotels have higher operation costs," said Xu. "The bedding and other items used in pet rooms need to be cleaned and disinfected separately."

"The cleaning, ventilation and disinfection of pet rooms usually takes three hours, or even longer, compared with common ones which take 40 to 60 minutes, so it also pushes up staff costs," she said. 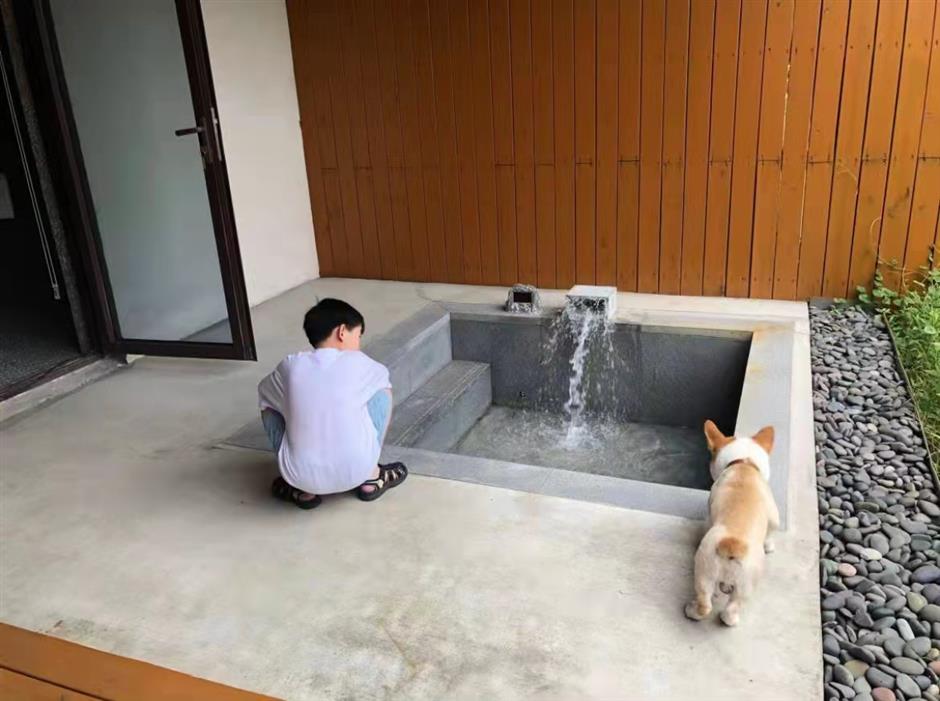 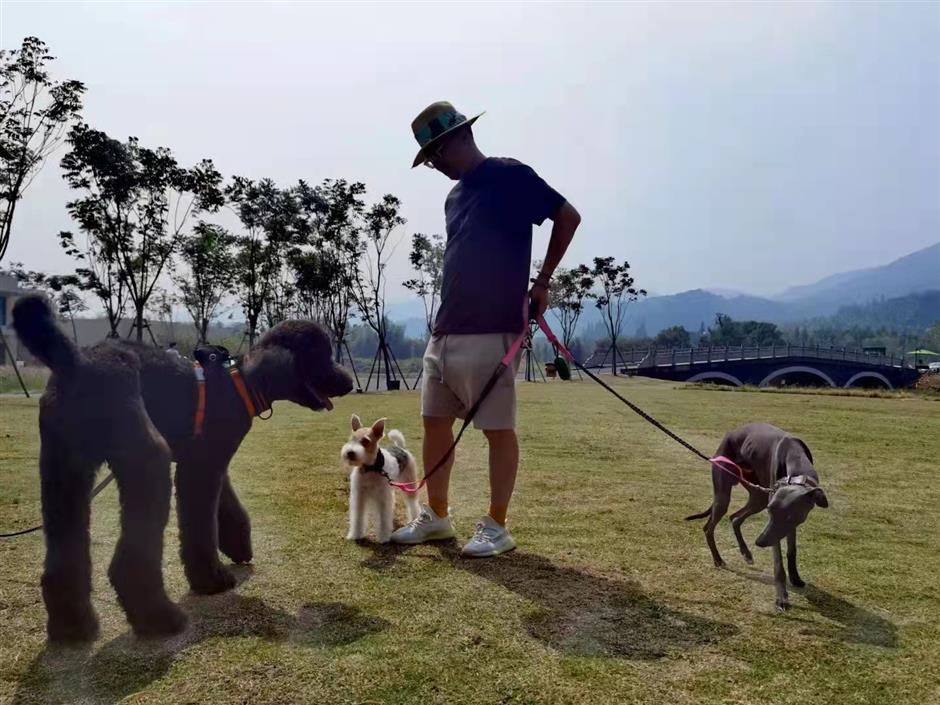 A pet owner enjoys time with his pets at a Blossom House hotel in Changxing County, Huzhou City of Zhejiang Province.

The Sun Island Resorts Hotel in suburban Shanghai's Qingpu District has 453 rooms in total and has set aside 20 rooms for pets in a relatively separate area.

The bedding items consist of less-adhesive material and the floors and sofas are scratch- and bite-resistant.

The Middle House Shanghai in Jing'an District is among the few hotels in the city's downtown that are pet-friendly.

It has allocated six rooms with balconies for people with pets. Beds, toys, cans of pet food in various flavors and biscuits are supplied, together with kennels for dogs and litter boxes for cats.

"The pet rooms are often out of supply due to strong demand," said Rebecca Yu, the hotel's senior communications manager.

"Because pets are deemed by most as a family member, we want to create a homey atmosphere by allowing pets in," said Yu.

The hotel has restrictions on the weight and size of pets and they are only allowed to move in certain areas. Their owners are required to leash dogs in public areas and monitor their pets' behavior.

"We only allow pets into pet rooms and outdoor terraces, preventing disputes to some extent," said Yu.

The separation of pet activity areas and strict cleaning and disinfection are basic criteria for pet-friendly hotels. Unexpected situations, however, inevitably arise.

A sports event organized for dogs at a hotel gathered more than 100 corgis. A small one was bitten by a large one, resulting in the big one's owner paying compensation, said Dong Qingyun, a pet owner, who witnessed the incident during a vacation.

The Sun Island Resorts Hotel first opened nine pet rooms in 2017, allocating them in the same area as common rooms. Complaints arose at night when a dog's barking disturbed other guests' sleep.

In 2020, the hotel moved all 20 pet rooms into an exclusive area to prevent similar issues.

It is also not rare for children to be hurt by pets at some pet-friendly hotels. 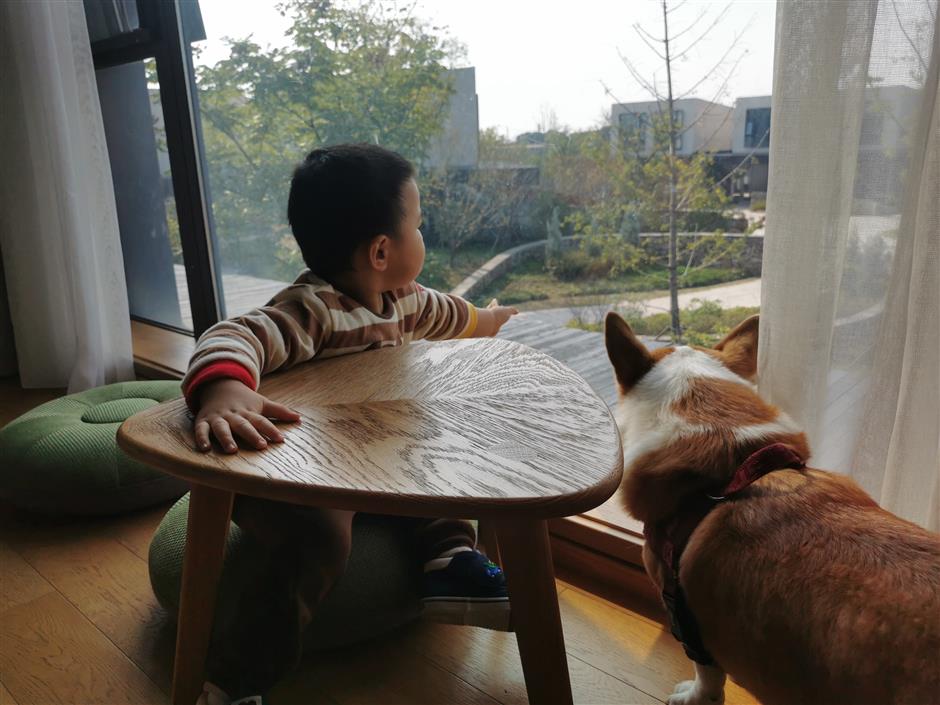 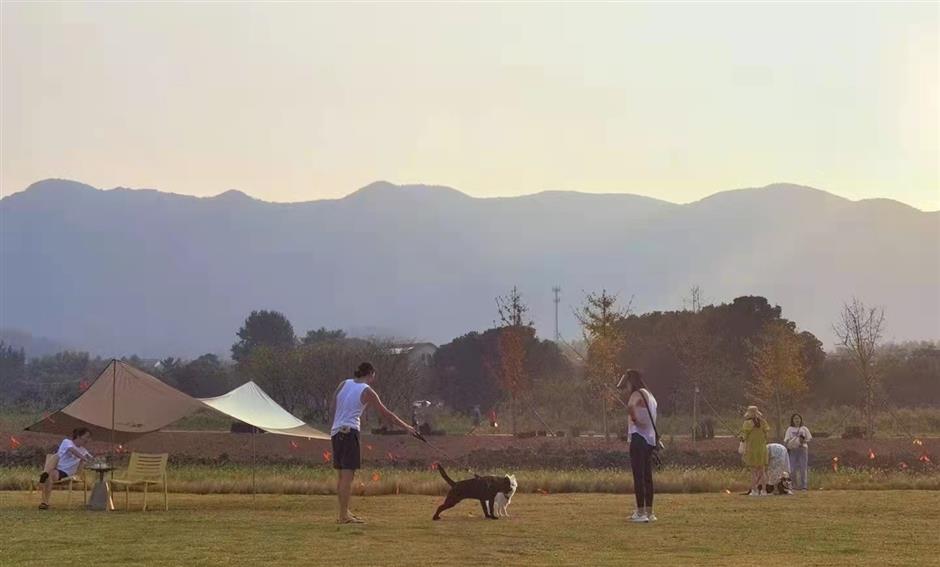 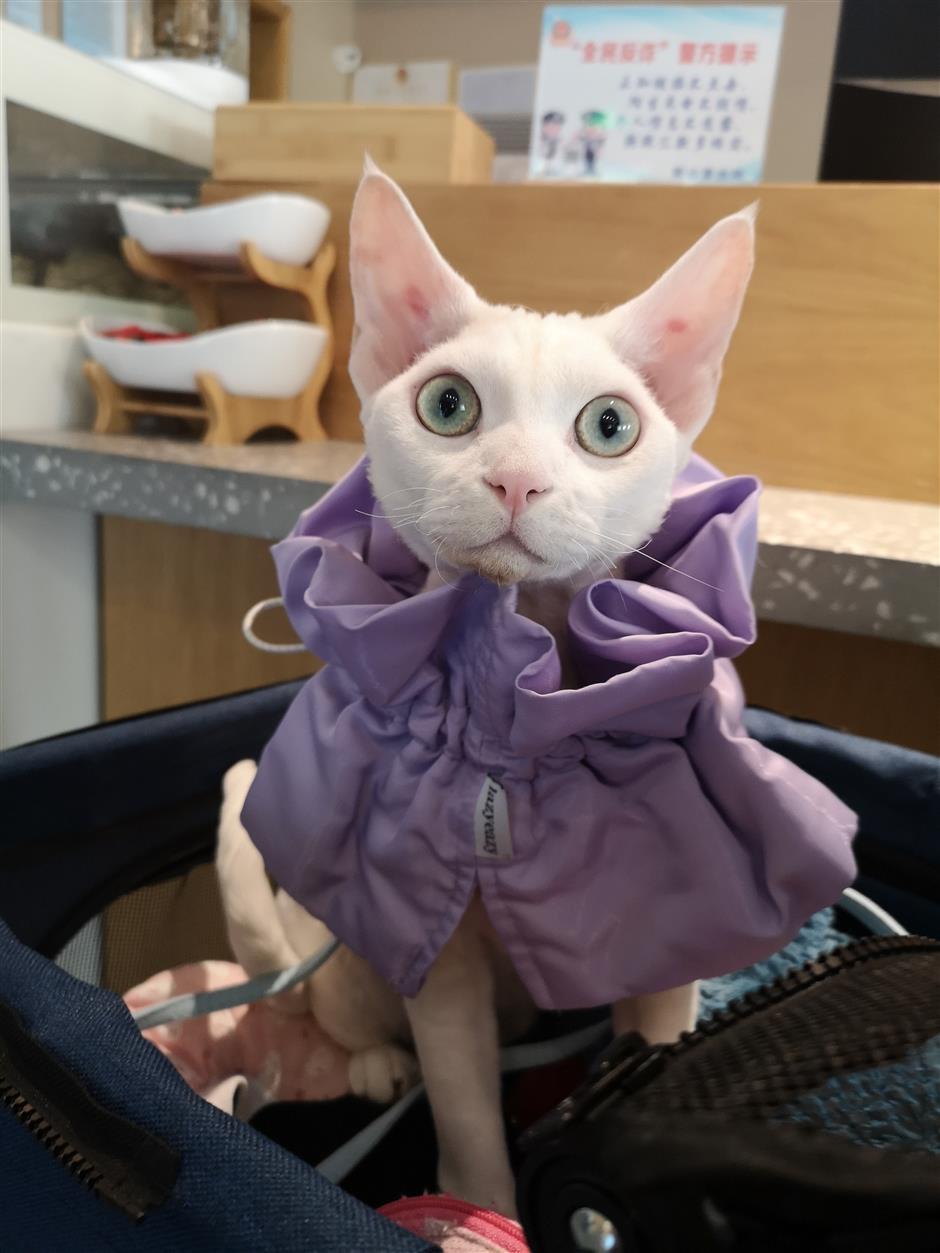 A cat is received at a Blossom House hotel in Yangshan. 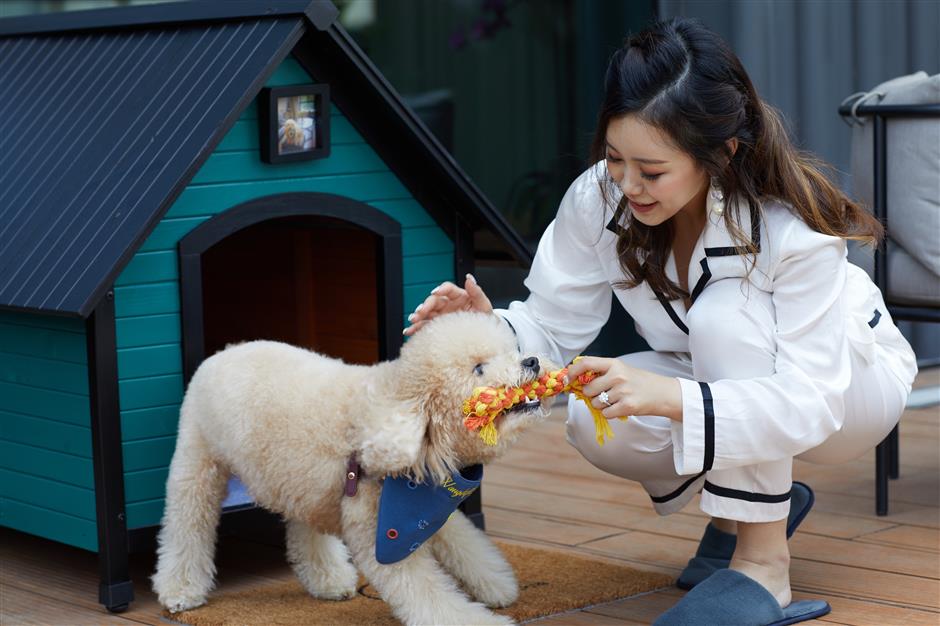 A dog plays at a downtown pet-friendly hotel in Shanghai.

Upgrade is the key word in the development of pet-friendly hotels in China.

Hotel chain brand Blossom House was among the first in China to accept pets 12 years ago. Its first pet-friendly hotel is in Lijiang, Yunnan Province.

There were few areas for pets to play in at that time. In 2013, the chain designed an exclusive pet playing area at its new outlet in Xixi area, Hangzhou, in neighboring Zhejiang Province.

In cooperation with pet service platforms, the chain has implemented specific cleaning procedures for pet rooms. It has trained staff to handle the reception process for guests with pets, pet health management, emergency incidents, pet behavior alerts and the cleaning of pet rooms.

Among the 31 Blossom House outlets nationwide, 22 are now pet-friendly.

Two in Changxing County, Huzhou City of Zhejiang, and Yangshan County, Wuxi City of Jiangsu, are the most popular among pet owners in the Yangtze River Delta region.

On average, 10 to 30 percent of guests using the 22 hotels bring pets, but it is as high as 60 percent for the two popular outlets.

The hotel chain aims to open 100 outlets in the following three years, with pet-friendly accommodation as one of its key services.

"There are some unexpected situations, such as kids, who have no experience with pets, playing with them at pet-friendly hotels. This poses the potential risk of injuries," said Chen Peixin, deputy general manager of the hotel chain.

"We are considering separating the check-in areas for pet-friendly rooms with barriers from check-ins for regular rooms in our future pet-friendly hotel design," said Chen. 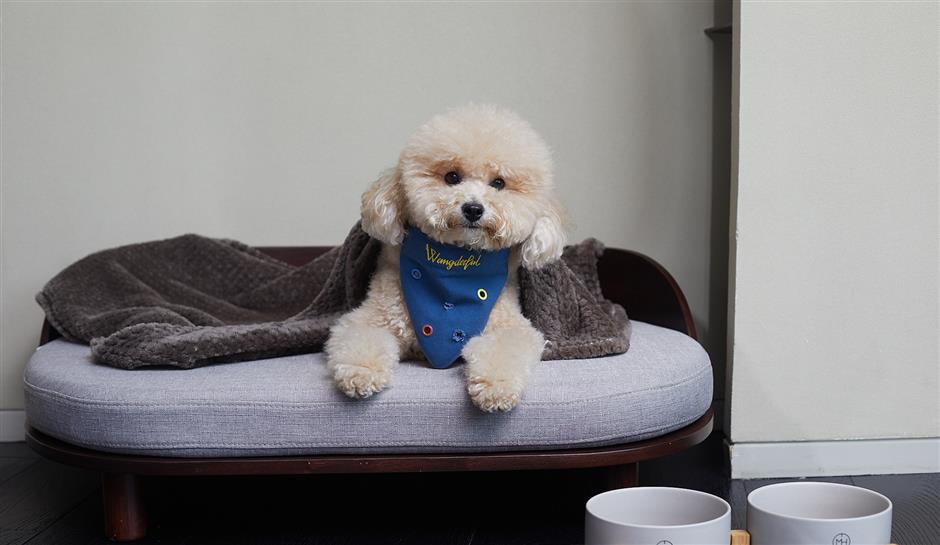 A dog stays at a downtown pet-friendly hotel in Shanghai. 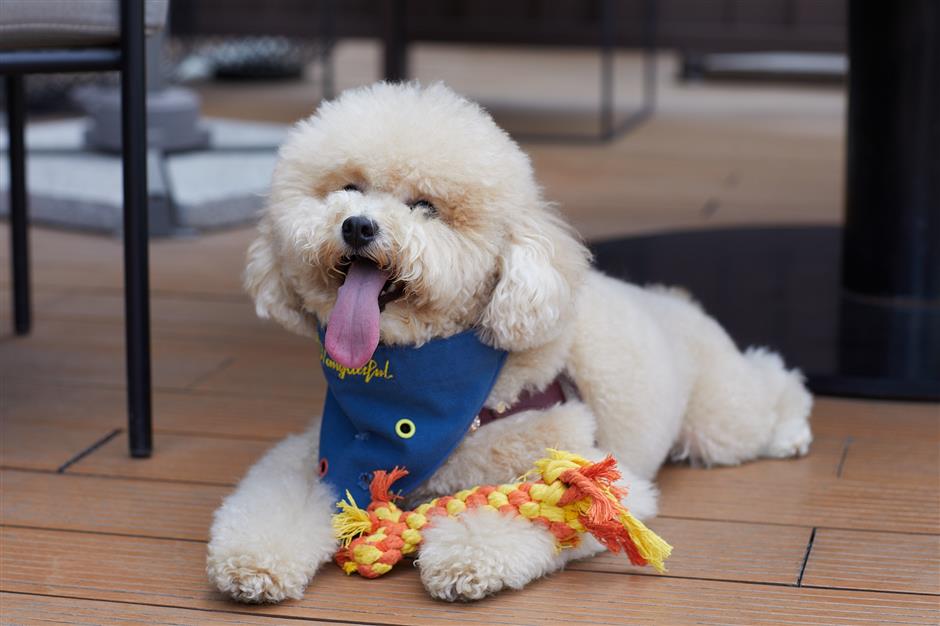 A dog relaxes at a downtown pet-friendly hotel in Shanghai.

Where to stay with you pet in Shanghai