Ten expats, two females and eight males, from Germany, the UK, the US, Japan and Italy were presented Magnolia Gold Awards on Monday for their great contributions to the city's social and economic development.

Here are the recipients: 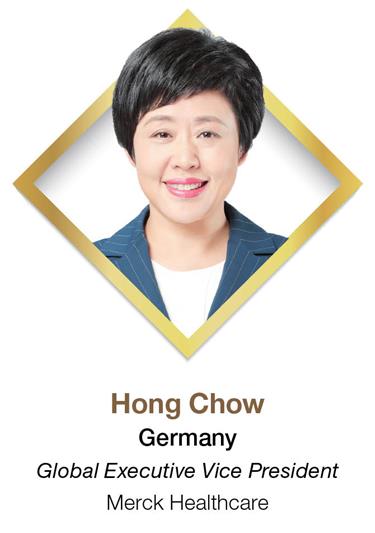 Hong Chow was general manager of Roche China and joined Merck recently. She won the city's Magnolia Silver Award in 2018.

Under her leadership, Roche China made strong business development. In 2019, the company's sales topped 20 billion yuan (US$3.16 billion) for the first time, making itself No.1 in output value in Shanghai's biomedical industry and one of the top 20 foreign-invested taxpayers in the city.

Roche's drug Actemra has been included in the 7th updated diagnosis and treatment plan for COVID-19 issued by China's National Health Commission and approved to be used in many other countries. Nine molecular medicines developed locally have been put into clinical use. With her efforts, seven of Roche's innovative targeted drugs are now included in China's national reimbursement drug list, making them more affordable for patients with serious and rare diseases.

Chow was invited to contribute her wisdom in drafting Shanghai's 14th Five-Year Plan (2021-25). She also led the R&D-based Pharmaceutical Association Committee to research industrial pain points, such as drug-related intellectual property protection and supervision on the importation of goods for special use to provide references for the government to make decisions.

She has been active in charitable activities, such as poverty alleviation, health care in rural areas and promoting public awareness of breast cancer and organ transplants. She is also a volunteer for organ donations. Based on her proposal, Roche set up a special foundation in 2020 to help children from poor families suffering from serious and rare diseases.

She has also recommended Shanghai's outstanding business environment to foreign companies on various occasions. With her efforts, Beiersdorf, one of the leading skincare companies, opened a new research and innovation center in Shanghai in 2020.

She was the first in the China (Shanghai) Pilot Free Trade Zone to receive China's Foreign Permanent Residence Permit Card in 2017 and honored with Shanghai's Magnolia Silver Award in 2018.

After the outbreak of COVID-19, Chow led the Roche team to raise more than 28 million yuan in capital and materials to support China's fight against the pandemic. She also shared China's pandemic control and prevention experiences with Roche's offices in other countries. 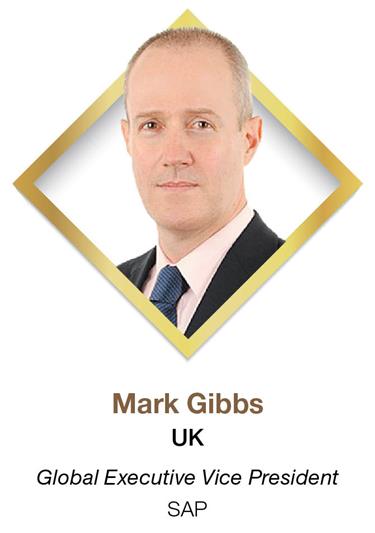 Mark Gibbs was a recipient of the Magnolia Silver Award in 2019. Under his leadership, German multinational software and information technology service corporation SAP set up its China headquarters in Shanghai's Jing'an District in 2015, which has become an engine for the company's global business growth.

In January 2020, the company was recognized by Jing'an's government as its first global service providers after the district launched its ambitious strategy to become a hub of global services.

In July 2020, SAP hosted a series of activities on World Artificial Intelligence International Day, promoting the occasion in Europe.

SAP is confident about economic development in Shanghai and across China, and is planning to expand investment in the markets here. It has launched a joint innovation center with Tsinghua University and signed an agreement with the Jing'an government to set up a global AI innovation center.

While delivering a speech during World Engineering Day in 2020, Gibbs called for promoting sustainable development with digital tools and a bigger role for China in international organizations.

Soon after the outbreak of COVID-19, SAP donated more than 20 million yuan in capital and materials to help Wuhan and other places in Hubei Province develop digital recovery systems. 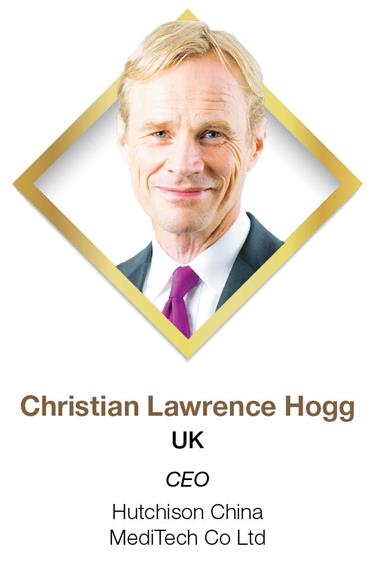 Christian Lawrence Hogg was a recipient of the Magnolia Silver Award in 2017.

He has been dedicated to developing high-quality, affordable drugs for people in China.

He adheres to the principle that locally developed drugs should serve Chinese people first. He has also carried out overseas clinical trials for new drugs, including in Europe, America and Australia, opening a new chapter for drugs developed in China to serve people around the world.

With an investment of US$130 million, the company kicked off the construction of an innovative drug production base in Zhangjiang in the Pudong New Area covering 2.87 hectares. It will be a first-class global manufacturing and clinical sample preparation center.

During the pandemic, the company donated 3.5 million yuan to the Shanghai Charity Foundation and more than 2 million yuan worth of medical equipment and medicine. Hogg has also led the company to resume production and ensure the supply of COVID-19 medicine and related materials. 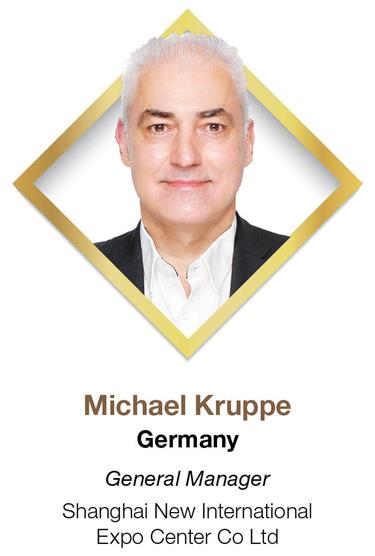 Under his leadership, the Shanghai New International Expo Center has been developing with an annual turnover of about 1 billion yuan. It receives 10 million visitors every year and is known as the busiest convention and exhibition center in the world.

With its exhibition service standards, the expo center has diverted exhibition resources to the Yangtze River Delta region and helped develop the convention and exhibition industry in the central and western regions.

Kruppe has shared his rich theoretical knowledge and practical experience in exhibitions with Chinese industry insiders and helped cultivate young professionals in the industry. With his efforts, the company has established a wide range of school-enterprise partnerships, exchanges, training and internship programs with colleges and universities at home and abroad.

As a former professional player for a Hamburg youth football team, Kruppe is still committed to promoting youth football. He helped Bayern Munich open an office in Shanghai and is active in promoting training and tournament organization for young Chinese players.

As the Asia-Pacific region vice president of the Global Association of the Exhibition Industry, Kruppe has introduced Shanghai to entrepreneurs around the world, attracting more exhibitions to Shanghai. Many entrepreneurs later invested or moved to Shanghai after getting to know the city.

Kruppe has been building cooperation between Pudong and German cities such as Munich. Via the German Center Shanghai, Kruppe has helped medium and small German companies invest in Shanghai and promoted cultural exchanges between China and Germany. 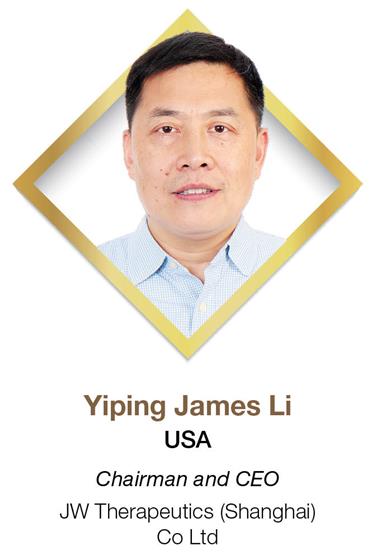 Under his leadership, JW Therapeutics quickly introduced Juno's CAR-T core technology platform, a breakthrough cancer therapy. The company has built a world-class platform for cell immunotherapy technology and product development, as well as a promising product pipeline covering both hematologic malignancies and solid tumors, providing hope for a cure. Moreover, it is leading the healthy and standardized development of China's cell immunotherapy industry, technologies from which have been exported to the United States.

Headquartered in Pudong's Zhangjiang Science City with more than 500 employees, JW Therapeutics was listed on the Hong Kong Stock Exchange in November 2020 and raised more than US$500 million.

Li has also been active in charitable activities. He has sponsored the Tree House Foundation to provide the latest information and consultation for families of those with lymphoma cancer. He has also made donations to build more than 10 reading corners for children in remote mountainous areas. 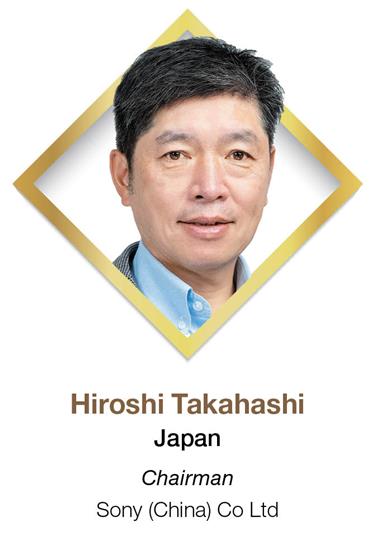 After receiving the Magnolia Silver Award in 2018, Takahashi continues to lead Sony China, promoting global debuts of its world-leading audio-visual products in China. The company now manufactures the vast majority of Sony TV products in Shanghai.

Takahashi has been dedicated to people-oriented, scientific and technological innovation to improve people's lives, leading Sony China's innovation programs in audio-visual technology, AI robots, healthcare and other areas. Under his leadership, the company has developed several innovative projects, such as intelligent glove design for sign language interpreters.

He personally presided over the "Sony dream classroom" project, which had built 214 dream classrooms in 211 schools in 111 Chinese cities by the end of 2020, and organized students from 57 colleges to teach at those schools as volunteers – teaching more than 36,000 classes. The program has benefited close to 6.5 million people and was awarded an "Outstanding Case of Foreign-Invested Poverty Alleviation" in 2020.

It has also been organizing coding competitions for children in Shanghai and promoting educational exchanges between China and Japan. 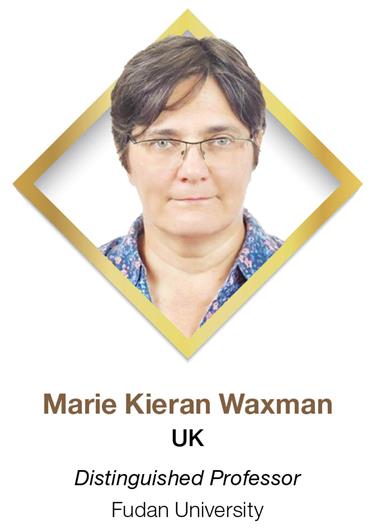 Marie Kieran Waxman became a distinguished professor at Fudan University in 2016 when she received the Magnolia Silver Award.

She and her international team focus on researching sustainable behavioral change, public participation and community development in sustainable development.

Some of their findings are included in Shanghai's garbage-sorting regulations.

Waxman has been partnering with several international universities and research institutions to help cultivate high-end talent for Shanghai.

In 2019, she won a sponsorship from the Global Challenges Research Fund, which helped establish several multinational cross-disciplinary research platforms and has funneled more international cooperation and exchange opportunities to students and young researchers at Fudan.

In March 2020, she returned to China with her family despite the COVID-19 outbreak to continue her research and teaching at Fudan. With her personal experience, she showed international students the importance of China's pandemic prevention and control measures. 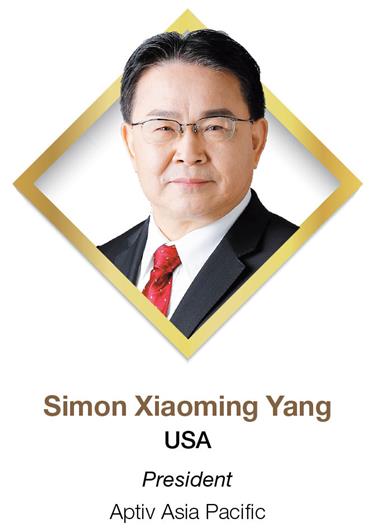 As a recipient of the 2018 Magnolia Silver Award, Yang has helped Aptiv Asia Pacific set up two regional headquarters and two global R&D centers in Shanghai.

Based in Shanghai, the company serves Asia-Pacific markets with its core auto parts manufacturing, storage, logistics and shipping network.

Yang created a voluntary association at Aptiv in 2008, serving as its chairman. Focused on caring for others, supporting education and protecting the Earth, he led about 20,000 employees on 58 voluntary activities around China. In the past 13 years, their services in Shanghai have benefitted nursing homes, Hope Schools and children from impoverished families. 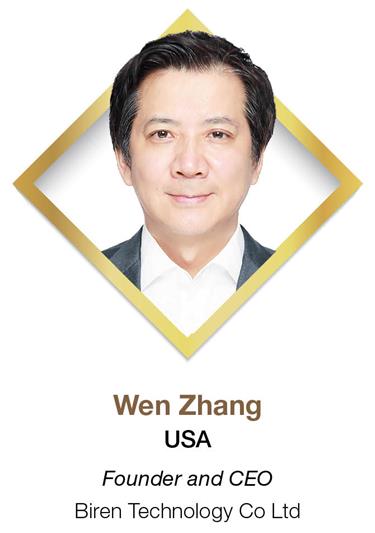 Wen Zhang returned to China in 2011 and spent two years setting up an industrial park focused on LED chips with an industrial scale of more than 1 billion yuan.

In 2013, he joined hands with the Lingang Group and China Development Bank to set up a foundation that attracts high-level talent to promote the development of high-tech industries in Shanghai.

He was honored with the Magnolia Silver Award in 2014.

In 2017, he became chairman of SenseTime. He developed SenseTime from a startup with eight people to a leading artificial intelligence company with thousands of employees, helping build the ecology for the development of AI enterprises.

In 2019, he set up Biren with an ambition to build it into a world-leading chip enterprise in China. Within six months, it raised a total of 5 billion yuan and hired more than 300 top professionals in the AI industry. Its first high-performance GPU chip is expected to hit the market next year.

Biren has set up scholarship programs with Tshinghua University and a joint lab with Shanghai Jiao Tong University to support their cultivation of integrated circuit talent. 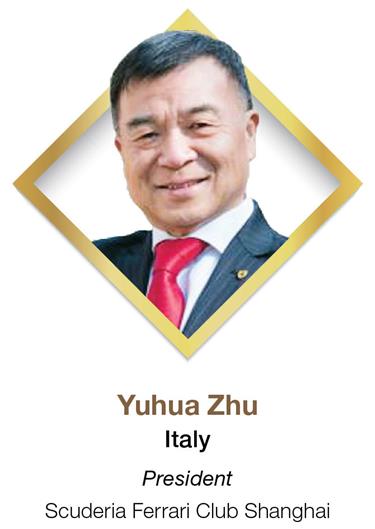 Yuhua Zhu has helped introduce the Ferrari brand into China and has been active in promoting Shanghai's sports, culture and tourism industries.

When Formula One Chinese Grand Prix took place in Shanghai for the first time in 2004, Zhu set up the Ferrari Club Shanghai, which now organizes the Ferrari Racing Day carnival every year, attracting thousands of car owners and fans.

Zhu has been a goodwill ambassador between China and Italy. With his efforts, the Italian flower capital Sanremo took part in the 10th China Flower Expo in Chongming last year. The city also signed an agreement with Chongming to carry out friendly exchanges.

During the pandemic, Zhu donated more than 20 million yuan to Shanghai and other places. He mobilized Chinese-Italians to purchase masks and other personal protection equipment and transported them to China.