The ABCs of how not to learn Mandarin

Mandarin can be a daunting language for Westerners to learn because it doesn't have an alphabet. It is a pictorial language of monosyllabic characters.

That's why novelist and poet Foz Meadows, an Australian now living in the United States, was taken aback when her third-grade son brought home a "Chinese alphabet sheet" from his elementary school in California.

The "alphabet" is based on the 26 English letters, each of them corresponding to a Chinese character that resembles them in appearance but has no phonic relationship. Thus, according to the sheet, "A" is 月, "M" as 册 and "Z" as 乙. Children in the class were asked to write their names using the "alphabet." 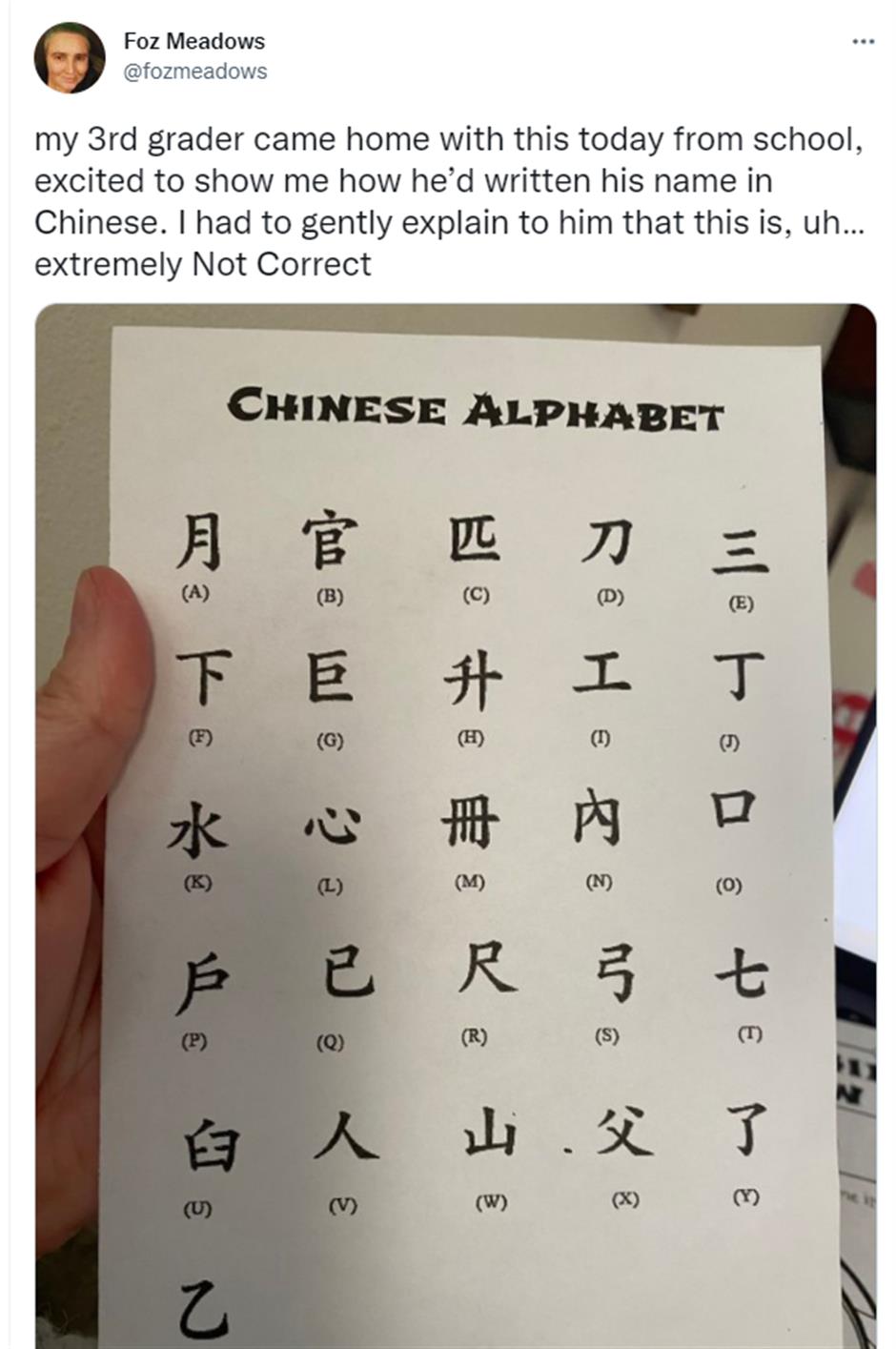 Under that exercise, a John would become 丁口升内. But in actual Mandarin, 丁 means "the fourth," 口 is "mouth," 升 indicates "rise," and 内 refers to "inside." Read in Chinese, the name makes no sense at all. In China, John is usually translated as 约翰, or Yue Han in pinyin.

"The alphabet sheet was part of a lesson about the Chinese Lunar New Year," Meadows told Shanghai Daily.

Meadows shared the "alphabet" on Twitter, and it soon attracted tens of thousands of likes, retweets and comments.

Some people said that they had seen it before and believed that the school was misleading children. Others noted that the right way to teach Chinese is with pinyin, the commonly accepted romanization system for pronouncing Mandarin characters.

"My daughter brought this sheet home, too, and I did think it was very, very cringe," commented a user with the screen name Stuart Neil.

The sheet tells the meaning of each character that was used to match the letters: 月 as "the moon," 册 as "books," and 乙 as "the second." But that was only a partly correct rendition.

It's hard to find the origin of this odd "alphabet," but one Twitter user shared a picture found online. It had a note apparently written on it by someone who seemed to be the creator of the "alphabet."

"Okay, truth to be told, there is no such thing as a Chinese alphabet," the note said. "But, just for fun, I have selected characters that are somewhat similar in appearance (not in sound) to the letters of the English alphabet. They can be used like a code."

While most people on Twitter tended to denigrate the "alphabet," some Chinese people appeared forgiving if not slightly bemused.

"It is indeed misleading, and we would never teach students with this 'alphabet,' but I think it might be a good way to provoke interest toward the Chinese language and culture," said Tessa Xue, a Chinese teacher for foreigners. "People might actually start learning if they find Chinese characters intriguing, and that would set them on the right path of learning the language properly."

After working at a language training center for nearly five years, Xue is good at building a "structure" for those who want to learn Chinese from scratch.

"Before the COVID-19 pandemic outbreak, most of my students were foreigners newly arrived in Shanghai," she said, "and they usually didn't have any idea about how the language works. So I would explain to them how Chinese characters evolved and the relationship between characters and pinyin."

Xue said she believes foreigners now are more knowledgeable about the Chinese language than in the past.

She recalled that about a decade ago, one of her online friends in Latvia asked her how long it would take her to "draw an essay."

"I was confused," Xue said. "And then she told me that Chinese characters looked like pictures to her, and she thought that it took a long time to 'draw' each character, so that it might take forever to write an essay. Nowadays, people don't ask questions like that."

Modern technologies are closing many such gaps of misunderstanding.

According to Meadows, there has been a surge in the popularity of Chinese media in English-speaking countries, now that online streaming services have made content from across Asia much more accessible than before.

Although she doesn't speak or read much Chinese, Meadows said she has picked up a few phrases from watching Chinese TV dramas, which are known as "C-dramas" among English fans.

Some of the dramas "came out on Netflix, and suddenly everyone I knew was obsessed with them, and for good reason!" she said.

Meanwhile, Chinese lessons seem to have become more commonplace, as least in Australia.

"Around the time I was in high school, people in Australia started asking why the languages most commonly taught in schools were French and German rather than, say, Indonesian, Chinese or Japanese, given that Asia was geographically closer," she said.

Today many schools in Australia offer Chinese-language lessons, and Mandarin is actually the second-most spoken language in the country due to an influx of immigrants.