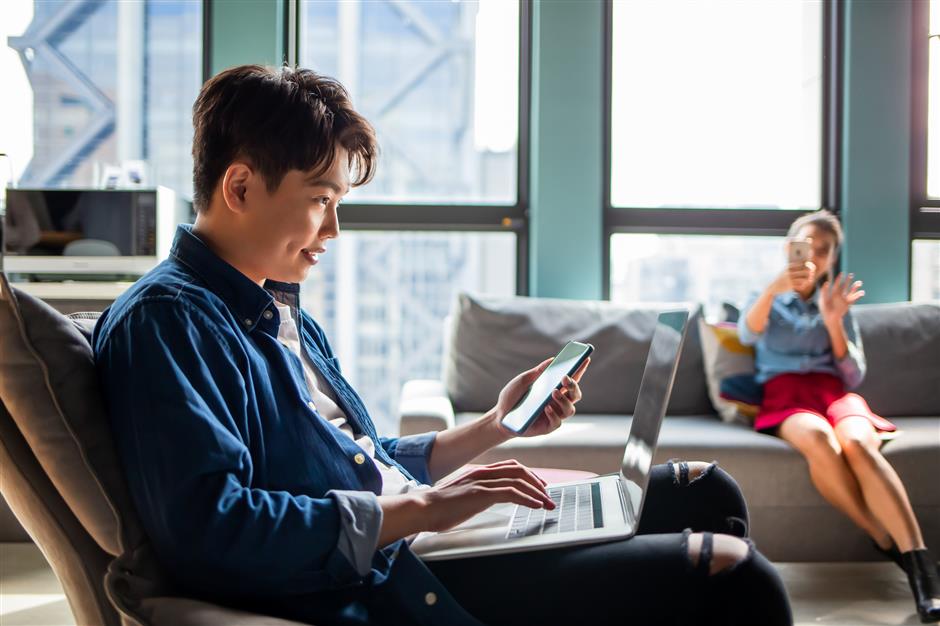 Employees are allowed to work remotely at home, cafes and bookstores with advanced technology support.

A working mother who wants to be identified only as Ah Pan is more chipper about her job nowadays. She works for the Trip.com Group, China's biggest online travel service, which is rolling out a policy that allows its employees to work remotely up to two days a week.

This hybrid work schedule is "something I really value," Ah Pan said.

Small wonder. For two days a week, she won't have to spend up to three hours a day commuting from her home on the east side of the Huangpu River to the company office near Hongqiao airport on the west side.

For those two days, she sets up her "office" in a coffee shop or bookstore near her home, also affording her the opportunity to have lunch with family members.

Shanghai-based Trip.com, formerly known as Ctrip, conducted trials of the hybrid work model in 2020 and 2021 at a time when COVID-19 was forcing people to work from home. On March 1, the company will roll out hybrid work on a continuing basis, the first top technology company in China to do so.

The practice may start to redefine the Chinese work environment – enhancing the work-life balance and breaking from the so-called "996" culture of working 12 hours a day, six days a week that has dominated the Chinese tech industry.

Many people wonder how veering from daily face-to-face contact will impact the entrenched Chinese concept of guanxi (connection).

That refers to building personal trust and a strong relationship with someone, and can involve moral obligations and the exchange of favors. The concept is sometimes incorrectly perceived in Western business as dubious "you scratch my back, I'll scratch yours" behavior, but it is a core part of doing business in China.

"The promotion of hybrid working is a multifaceted win for companies, employees and society," said James Liang, chairman of Trip.com.

With the nation's digital transformation and epidemic prevention rules, an estimated 45 percent of Chinese companies are initiating remote work opportunities, higher than the average level of 41 percent in the Asia-Pacific region. About 70 percent employees welcome the system in China, according to the professional site LinkedIn.

The results showed that 60 percent of workers wanted to participate, and the company's turnover rate dropped by about a third.

In a related company survey, 93 percent employees said they felt the model led to more work efficiency, and more than 75 percent reported an improvement in their overall well-being. 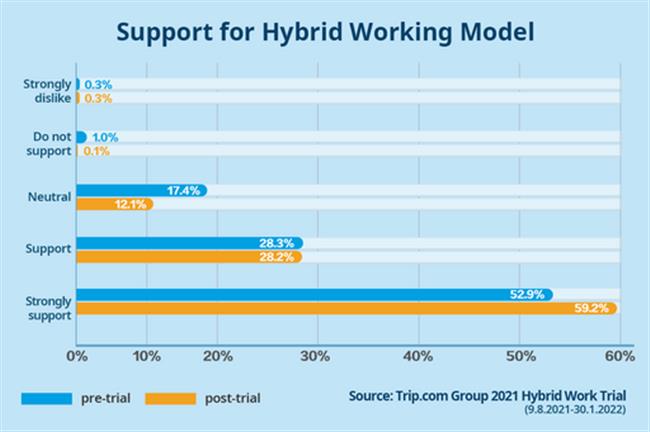 Ah Pan, who leads a team of three, said she was worried at first about the loss of face-to-face personal contact. But she found that online meetings keep her team cohesive and supportive.

Xiao Xiao, a Trip business development manager, said the hybrid model made her "more efficient" both at work and at home. She has more time to spend teaching her child, she said.

Tan Lidong, a business leader in the Trip's air-ticket business, said the hybrid work model was no big deal to him because it was quite common in the US where he had been working.

After a six-month trial, Tan found no drop in his team's efficiency but a rise in job satisfaction.

"We hope that the hybrid work model will be adopted more across Chinese companies in the future, which will have a positive and far-reaching impact on society and the economy," Chairman Liang said.

The hybrid work model helps Trip distance itself from the Chinese digital industry's infamous "996" work culture, which became a grueling, unwritten standard for many tech firms.

The overwork was blamed for the unexpected deaths of some young people.

In November, ByteDance, parent firm of TikTok, announced the "1075" work policy. That calls for staff to work from 10am to 7pm five days a week, including lunch breaks.

That same month, digital giant Tencent announced a "965" plan of working from 9am to 6pm five days a week. Some employees, however, complained that the new policy lack flexibility in hours.

By comparison, Apple, Facebook and Google, among other tech giants, have allowed the majority of employees to work from home for two days or more each week since the epidemic struck.

Though it may have started with a pandemic, the hybrid work model has generated a life of its own, thanks to the digital revolution.

"Passively or actively, everyone has had to face changes in the workplace and in personal lifestyles, especially since the epidemic," said Lily Fu, China managing director for US-based Avaya.

The company, with local clients including bank, electric car and entertainment industry giants, said demand for hybrid work plans is growing in chip, finance and advanced manufacturing industries in Shanghai and across China. It has partnered with Alibaba to provide local firms customized services.

Hybrid work is "the biggest shift in how we work in a generation," according to Microsoft CEO Satya Nadella.

A woman who wants to be identified only as Jade is a Chinese marketing officer for a US-based tech firm. She is required to work in the office only two or three days a week.

"We apply for office time online because working slots are limited," she told Shanghai Daily. "That makes me fully concentrate on work and communicate well with colleagues when we are in the office."

Hybrid work also helps digitally connected employees across different regions of China. Talent who used to have to come to Shanghai or Beijing to pursue careers can now remain in other big cities like Chengdu, Wuhan, Xi'an and Chongqing without hurting their professional prospects, according to research from the Tsinghua University in Beijing.

There is no one-size-fits-all model in hybrid work, especially in China, where face-to-face contact has long underpinned business and personal relationships.

Trip.com's decision to formally roll out a hybrid work model recently went viral in an online debate. While the majority of netizens applauded the move, some expressed reservations.

One post on Weibo asks, "Will I still get a promotion if I work at home and meet my boss less?"

Another worries about how to manage co-workers in dealing with complicated problems.

"Work at home sometimes means meetings at any time of the day, even after 9pm," said a netizen calling himself Da Bing on WeChat. "It sucks!"

According to LinkedIn, only 11 percent of Chinese employees would favor working from home full-time.

Many worry about difficulties in personal communications and the effects on promotions and career opportunities, the website said.

Some Trip managers admitted there were issues with management and communications during the hybrid work trials.

People may embrace hybrid work but they don't want to give up the traditional work model because so many jobs in China rely on building trust and relationships face-to-face, said Chen Yubo, senior associate dean of the School of Economics and Management at Tsinghua University.

"Guanxi and trust-building sometimes are more important than sharing information and ideas," he added.

"If I don't get a response online to something urgent, I'll simply make a phone call," she said.