CIPS or the Cross-Border Interbank Payment System, seen as the Chinese equivalent of the globally-used SWIFT, or Society for Worldwide Interbank Financial Telecommunication, has become a buzz word in the domestic capital market and related industries.

Shares of Chinese CIPS-related firms, covering payment, finance and tech industries, surged 20 to 30 percent in trading over the past two days, following a Western move to ban certain Russian banks from SWIFT. This follows Moscow's decision to attack Ukraine.

Local firms are now talking about how to improve and develop CIPS payment services, which will boost the internationalization of the Chinese yuan and help companies do business overseas.

Greater use of China's CIPS, instead of the Belgium-based SWIFT payment system, is quite possible amid the SWIFT ban.

But analysts said that other payment systems, including those developed by China, Europe and Russia, can't replace SWIFT, which accounts for more than 80 percent of international transactions.

SWIFT's dominance is "unshakable" for now, and alternative solutions need to be further improved in terms of financial risks, user habits and international rules, said Dong Qi, an analyst with Guotai Junan Securities.

But the SWIFT ban on Russia may boost the development of non-US dollar and non-SWIFT transactions, including CIPS. It may also stimulate e-yuan, China's official digital currency, experts said. 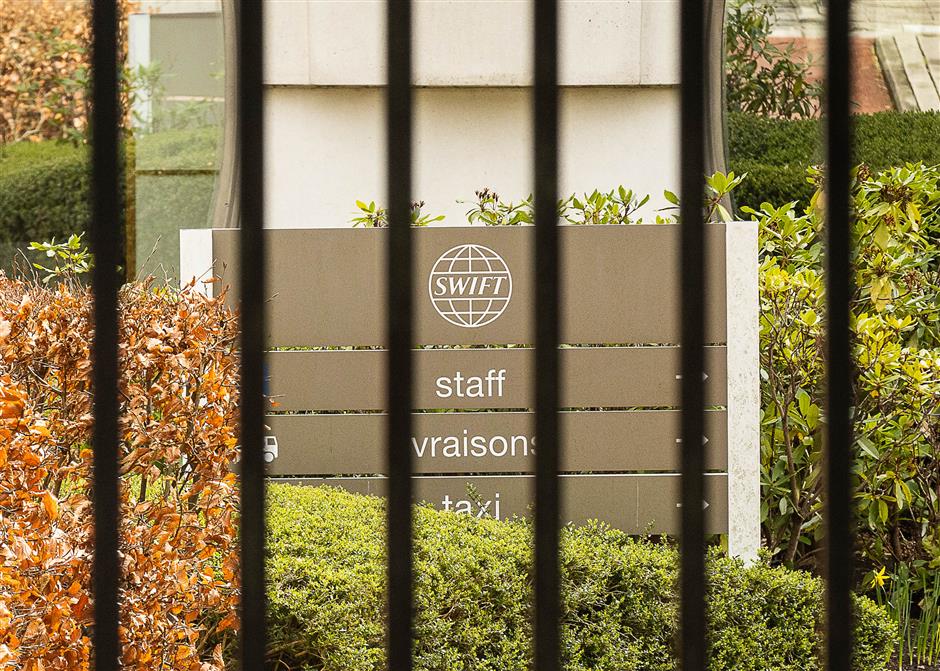 A picture taken on February 25 shows the headquarters of SWIFT, Society for Worldwide Interbank Financial Telecommunication, in La Hulpe (Terhulpen), near Brussels.

What are SWIFT and CIPS?

SWIFT is a secure messaging system and the principal interbank transaction system globally. SWIFT is now used by 11,000 financial institutions across 200 countries or regions, including nearly 600 Chinese banks.

Besides SWIFT, there are several international payment systems, including CIPS, but with much smaller scale and limited global coverage.

The others include Europe's INSTEX (Instrument in Support of Trade Exchanges) and Russia's SPFS (Financial messaging system of the Bank of Russia).

A boost for CIPS-related firms and ecosystem

The SWIFT ban is expected to accelerate the expansion of China's CIPS and bring opportunities to the whole ecosystem. They cover finance, payment and tech firms, such as those offering information technology infrastructure and services for the system, according to market watchers and investors.

The system has brought a buzz to the capital market this week.

HyUnion Holding, whose business includes payment and supply chain finance, soared by the 10 percent daily cap for two days in a row to close at 9.50 yuan (US$1.48) on Tuesday. Beijing Infosec Technologies Co, which offers signature server and security services for CIPS, surged 27 percent this week. Shenzhen Forms Syntron Information, which offers IT services for banks, jumped 30 percent in the period.

Development of the e-yuan is also a catalyst for CIPS. Both will play important roles in the internalization of the Chinese currency, analysts said.

China began exploring a sovereign digital currency in 2014 and trials of the digital yuan began in May 2020.

In mid-January this year, more than 261 million individual users nationwide had registered a digital yuan wallet. It was used and tested at venues of the recent Winter Olympic Games in Beijing.

China should continue developing CIPS with expanded international coverage and technologies. It can leverage techs to improve CIPS with blockchain, artificial intelligence and big data, payment firms, which declined to be identified, told Shanghai Daily on Tuesday.

A blockchain is a decentralized and digital ledger consisting of records called "blocks," which can be used to record transactions and services. Compared with SWIFT, it's faster, more efficient and secure.