After undergoing relocation and renovation for years, Zhangyuan has regained in liveliness.

Zhangyuan, or Zhang's Garden, opened in 1885 as China's first modern pleasure garden, but it later decayed into a neighborhood of dilapidated houses. Its former glory has now been restored in the latest round of urban renewal.

The western section of Zhangyuan reopened today as a lively rendezvous point where historic buildings have been converted to boutique stores and pop-up displays of well-established luxury brands like Dior, Louis Vuitton and Vacheron Constantin as well as instagrammable stores like Blue Bottle Coffee, By Far and RE Bike Museum. 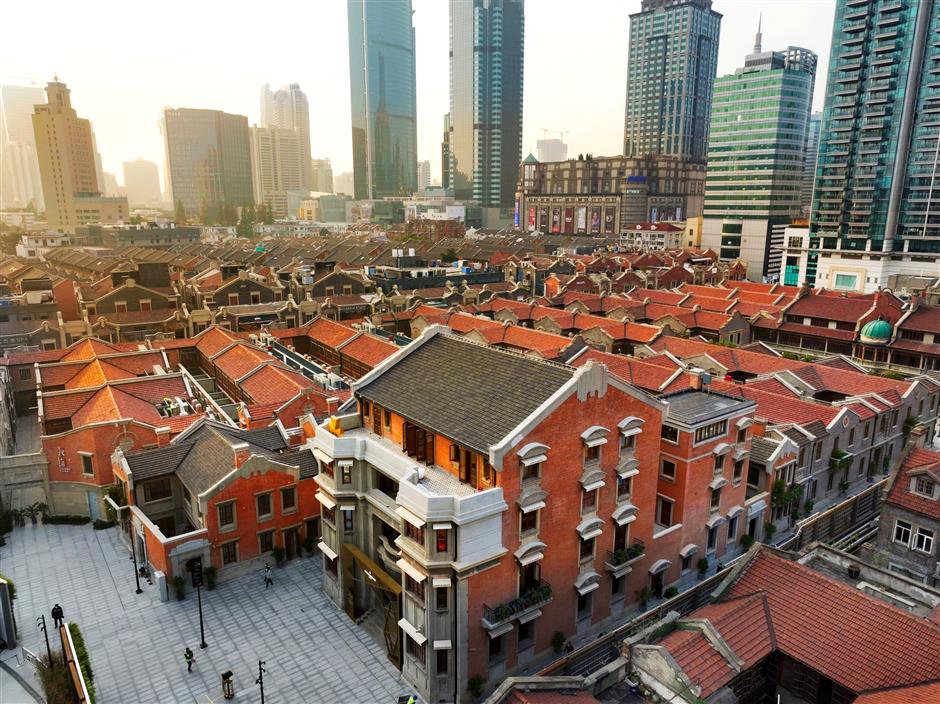 Zhangyuan takes on a new look.

"We tried to explore the brands' cultures and blend with the vibes of historic buildings," he said, noting that some big-name brands had been rejected. "The organic combination between the old and the new. That's why it has cost us much time to select brands. "

"Zhangyuan will feature first stores, debut products and other firsts," he added.

"High buildings and wide roads were once considered to be the epitome of urban development. But nowadays, it's the revival of historic blocks," said Zhou Qi, who's in charge of the renovation. "It's more than just a facelift. Urban renewal is a matter of blending historic buildings and modern settings." 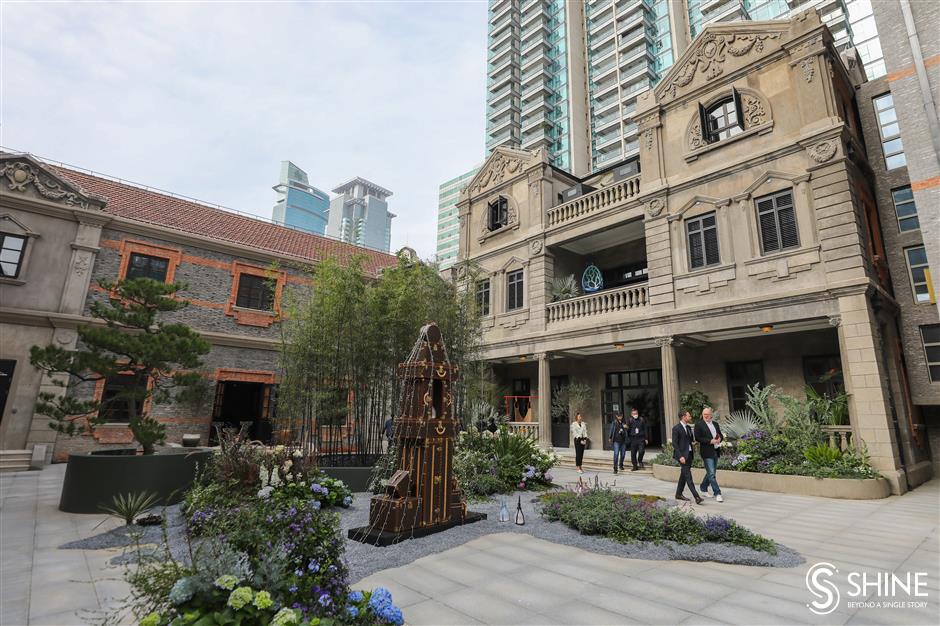 LV displays in an open square.

Currently, the compound is only open to invited guests. It will open to the public on December 1, but viewing is by appointment only via WeChat account "上海张园", with reservations opening immediately.

Based on the city's COVID-19 prevention and control measures, it has an instantaneous maximum reception capacity of only 1,500 visits, according to Shi.

In celebration of its reopening, light displays showing Zhangyuan's history with treasured moments when it captivated the public with a heady mix of novelties like a roller coaster, firework show and fire balloon over a century ago will be staged 6pm to 10pm every day for 14 days starting from today.

Of the invited guests, 62-year-old Lang Zhongying and her 65-year-old husband Man Lichu were especially excited. As original inhabitants, it's their first time to say hello again to the place where they had lived for decades. 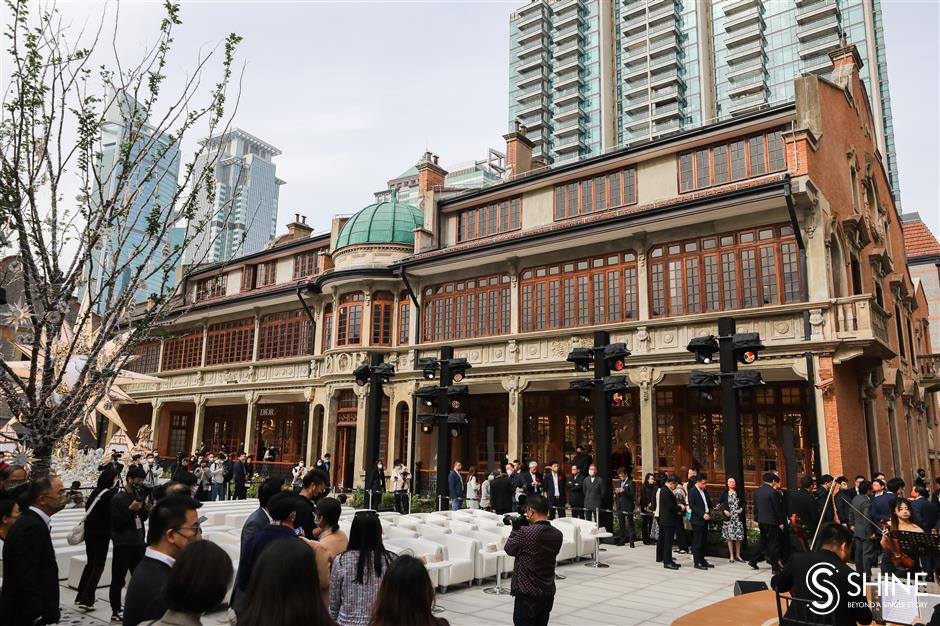 "I just can't recognize it! These old alleyways and houses have changed substantially! But they've become so beautiful and attractive," Lang told Shanghai Daily.

Zhangyuan, tucked away in the bustling Nanjing Road W., dates back to 1872, when a British merchant bought a plot of farmland to build garden villas. It fell into the hands of wealthy Chinese entrepreneur Zhang Shuhe in 1882 and he turned it to the city's most popular pleasure destination three years later, calling it Zhangyuan. 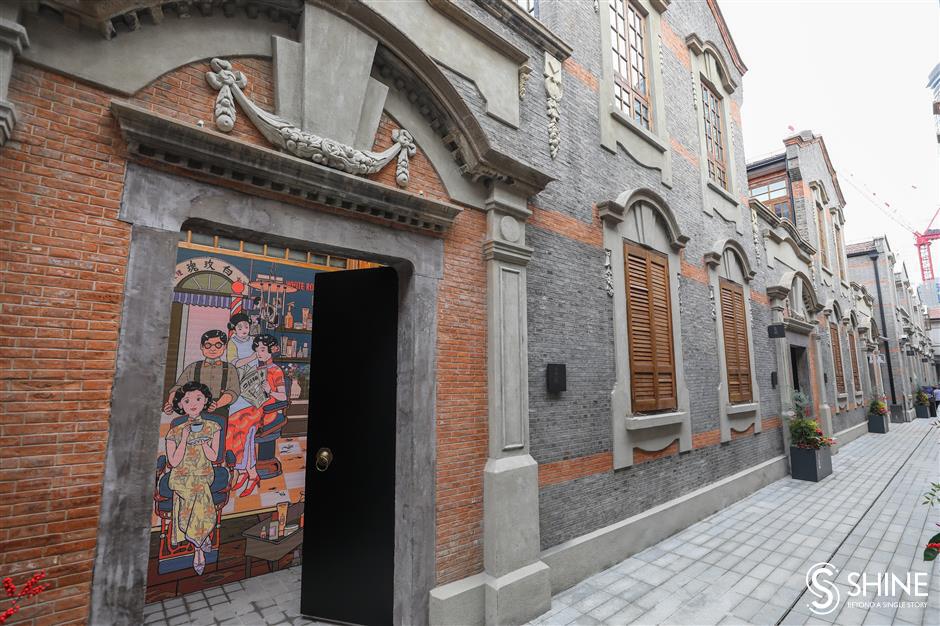 However, as newer entertainment venues sprang up, the garden gradually declined, and it closed in 1918. The next year, the year of Zhang's death, his garden was subdivided and sold to 28 developers. Though his dream park vanished, a living shikumen museum emerged.

However, the stately residences were later partitioned into smaller units occupied by multiple families, which led to squalid living conditions, with shared kitchens and toilets, and cracked walls and leaky ceilings. 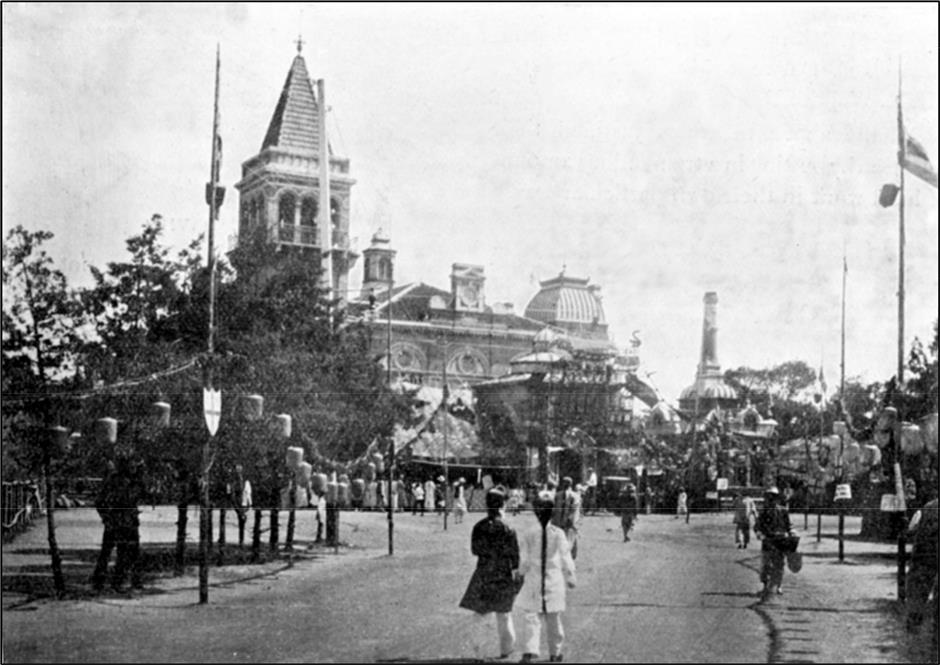 Zhangyuan used to be the number one pleasure garden in Shanghai.

Jing'an launched the urban renewal plan of Zhangyuan in 2018, and started relocation and renovation the next year. More than 1,200 families were relocated and 42 historic buildings were retained: 16 in the western section and 26 in the eastern section.

Zhou and his team spent a year wrapping up the renovation of the western section of Zhangyuan by the end of September.

"We try to restore their original look as far as possible as to retain its historical and cultural charm as well as to trigger a sense of nostalgia among people who used to work and live here," Shi said.

"We want to show people how it looked like 100 years ago," said Zhou. "As people meander through the alleyways, they will feel transported back to the heyday of Zhangyuan. 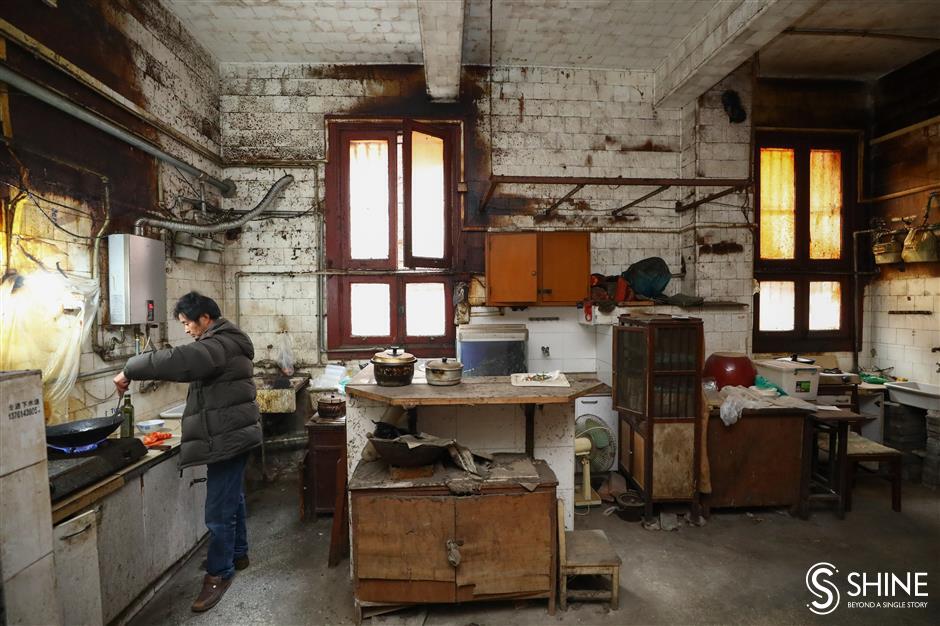 Lang and her husband were relocated in 2019. Over the three years, the place has changed a great deal, but the could vividly recall their former address.

"Look! It's there we used to live," Lang pointed out a house at the end of an alleyway. "It's No.3 Lane 220 Zhenxingli where my husband grew up and lived almost for life. I moved here after I married him more than 30 years ago."

She moved around the house, explaining the original layout.

"There used to be wing rooms at the front and rear," she said. "Here's the kitchen. Our stove was next to the door."

Like many others, the house was shared by several families. Lang's family, consisting of six members, used to live in an 18-square-meter room. 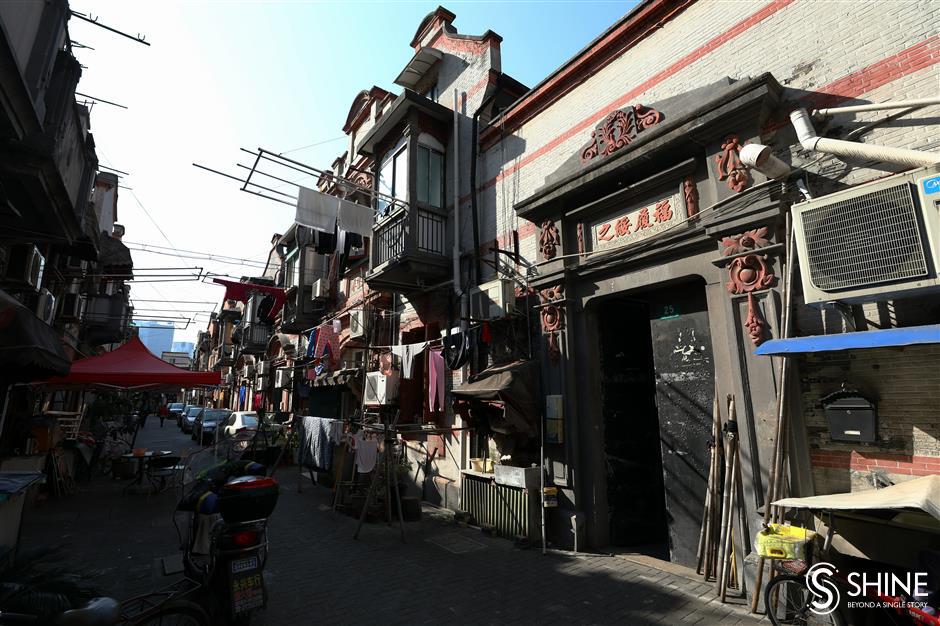 A cramped laneway before renovation.

But thanks to the relocation, they got a hefty sum of compensation and resettlement funds to find a new apartment.

"Now, two of us live in a 40-square-meter unit in Jing'an Villa, which is just across the way," she said. "Though we've got relocated, we miss Zhangyuan and thus we want to live near to it. I often have a stroll in the surrounding areas to feel Zhangyuan and share photos with my old neighbors."

Renovation of Zhangyuan is still under way. Under the plan, the eastern section will feature boutique hotels, apartment buildings and creative workplaces. It is set to open to the public by the end of 2026. The southern and northern sections will feature a performing arts center, museum and other cultural venues.

Click here to see video of Zhangyuan's history and renovation: Reliving the past: an old pleasure garden finds modern expression 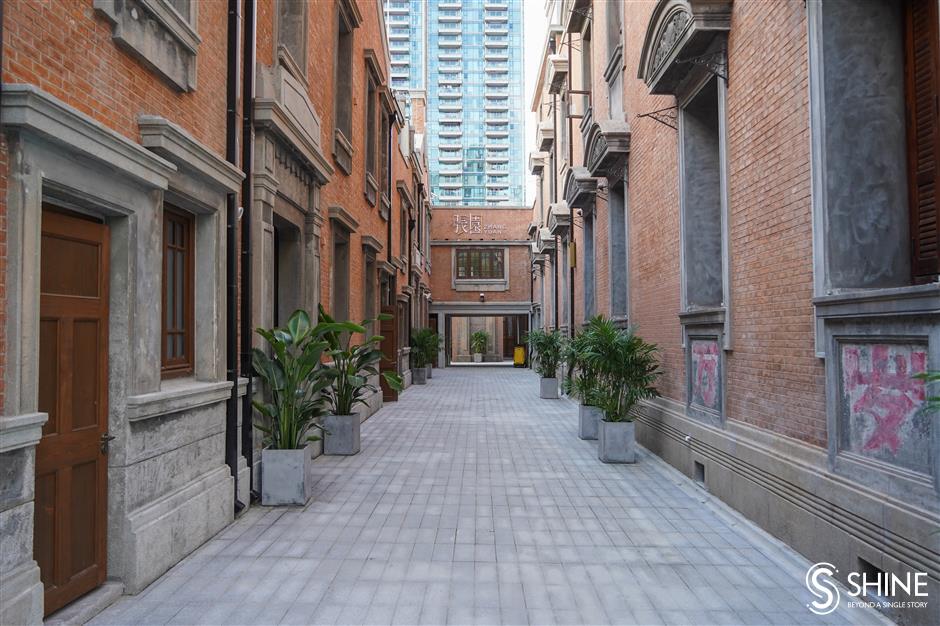 An alleyway in Zhangyuan.

Details: It will open to the public on December 1. Viewing is by appointment only via WeChat account "上海张园", with reservations opening immediately. Be aware that all visitors will be required to show a negative nucleic acid test result within 48 hours (from result time). 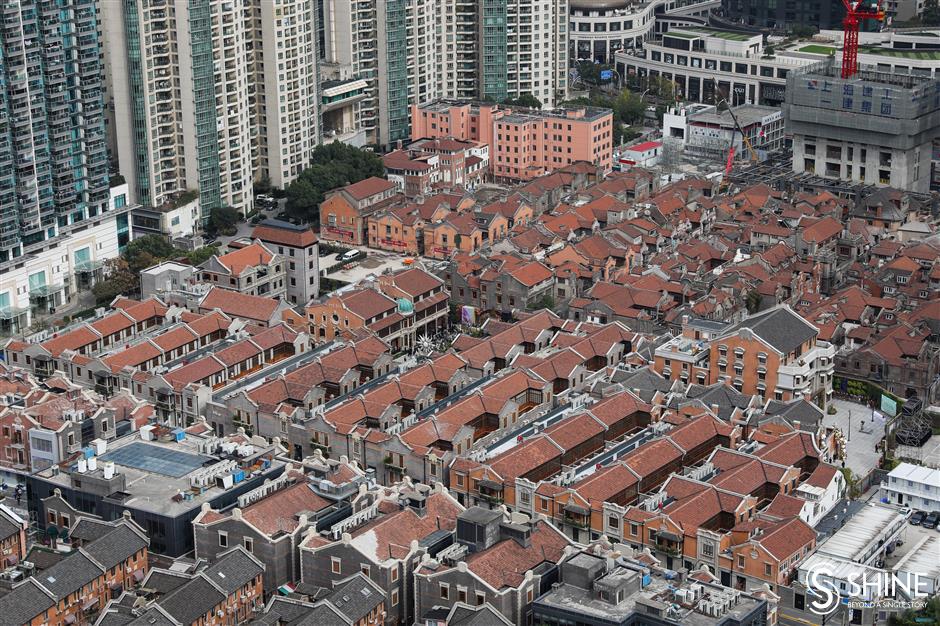 A bird's-eye view of Zhangyuan