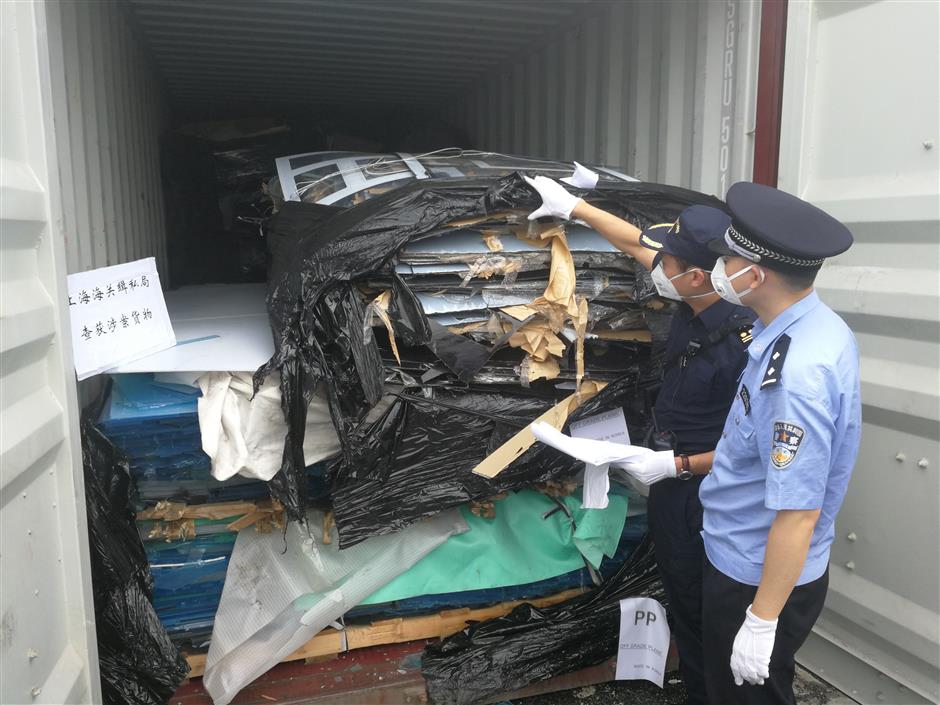 Shanghai Customs has detained 13 people accused of smuggling almost 30,000 tons of illegal plastic waste from overseas, as part of a national crackdown on “foreign garbage.”

They said each shipping container — carrying about 20 tons — yielded a profit of 8,000-10,000 yuan for the smugglers and their buyers.

Customs said its Big Data monitoring system had picked up unusual traffic from a local trading company in Shanghai, indicating it had smuggled more than 28,000 tons since October.

The waste was shipped to a factory in Thailand then brought to Shanghai using a freight forwarding agent who was paid 1,500-1,800 yuan a ton. The agent declared the material was plastic sheets or plastic foil — both legal categories — in the customs paperwork.

The crackdown which Shanghai Customs has taken against illegal imports of solid waste is part of the nationwide Blue Sky 2018 campaign.

China’s customs authority seized 137,000 tons of illegal trash imports on Tuesday in what it called the largest crackdown against trash smuggling in recent years.

The smuggled trash included scrap metal and waste mineral residue, the General Administration of Customs said in a statement.

It said it also found evidence of 606,500 tons of illegal solid waste imports, including scrap plastic.

It was the third crackdown on trash smuggling launched by the GAC this year. So far, 249 suspects from 81 smuggling rings have been detained and 217,000 tons of waste seized.

China began importing solid waste as a source of raw materials in the 1980s, and has for years been the world’s largest importer, despite its weak capacity in garbage disposal.

China told the World Trade Organization last year it would stop accepting imports of 24 types of foreign waste by the end of 2017 and that it would phase out shipments of other waste products, including those readily available from domestic sources, by the end of 2019.