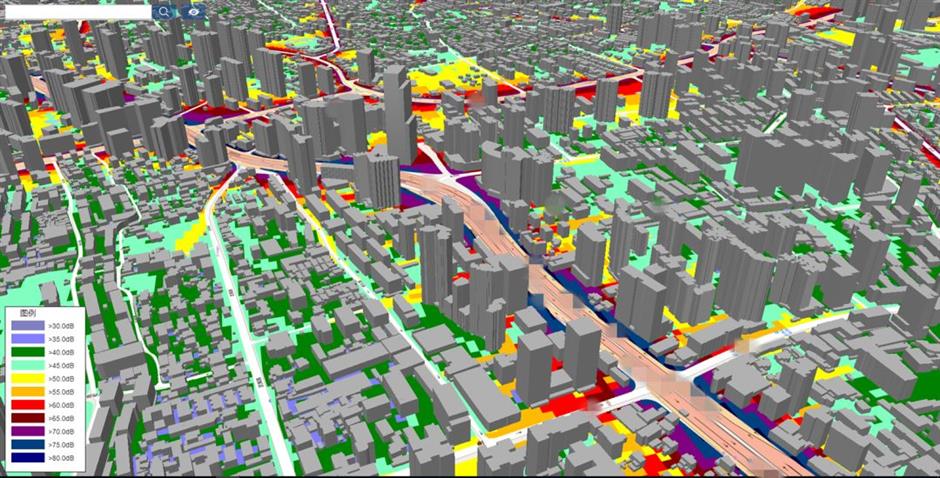 A “noise map” has been developed by Shanghai Academy of Environmental Sciences which allows people to “see” noise.

On this map, each street block and major road within the Outer Ring road is given a color. There are a total of 12 colors which represent 12 noise levels. For example, a purple color means noise detected in the certain area is between 30 and 35 decibels. Red color indicates 60-65 decibels and blue color is between 75 and 80 decibels, etc.

Roads along busy elevated ways are often of red or blue color, while neighborhoods and parks are usually quieter, showing a color of green or purple.

According to Zhou Yude, director of the academy’s noise control engineering research center, the project was kicked off about six years ago, and the map is still being tested and improved before being officially introduced to the public.

Noise detectors around the city help collect data to decide the color of certain areas. But for areas without detectors, researchers borrow indirect data from other city departments and “translate” them into decibels.

“For roads that are not equipped with detectors, we collect traffic data from the transport department, including vehicle flowrate, car speed as well as car model,” said Zhou.

“For example, If the flowrate of a road is 5,000 to 6,000 vehicles per hour with an average speed of about 50km, and the vehicles are mostly small-size cars, our calculation says the average noise level of this road is between 65 and 70 decibels during day time.

“We use similar methods for roads along railways. We collect information like timetable and train speed, and calculate the noise in different times of a day. After years of improvement, on-site verification shows that the error rate of such calculation is no higher than 3 percent,” said Zhou. 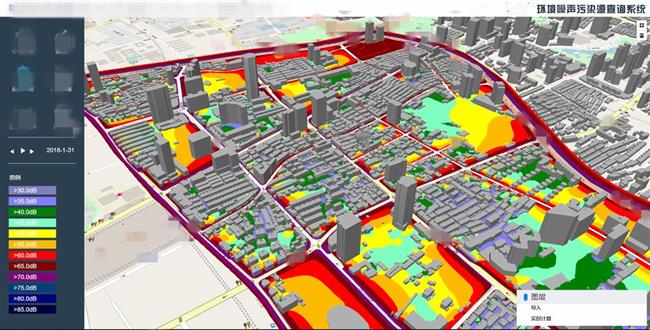 The noise data are collected by detectors or "borrowed" from other city departments.

According to Zhou, the map updates data every 20 minutes. If maps taken at different times are displayed together, it shows the effect similar to a meteorogram, giving researchers an idea how noise level changes with time in certain areas.

Noise map is not a new invention, but quite new a technology for China. Back in 2007, European Union member countries have been required by the EU to make noise maps for cities with population over 250,000, so that the government can take measures against noise pollution.

Some cities in Japan and South Korea also have noise maps, which are used for environmental protection purpose as well as urban planning.

But most noise maps in European countries don’t get updated so frequently. Some get updated only on a yearly base.

“It doesn’t mean that we have better technology than those countries” said Zhou. “The updating rate of a noise map is decided by how we want to use it. In European countries, the map is usually used for long-term environment policy making and urban planning. But for a city like Shanghai which is still developing with fast speed, noise data changes quickly with on-going city construction. The maps of different months or seasons can be very different,” said Zhou.

The noise map can also help detect hidden noise sources. Zhou said in one particular case, the roof of a building which is next to a busy road showed blue color on the map. However, its color rarely changed and the noise level it indicated is often higher than the major road nearby.

Local environmental protection authority’s investigation showed that there was a heat pump on the roof of the building which kept making noise. The authority then ordered the property management company of the building to take measures against the pump so as not to disturb nearby residents. 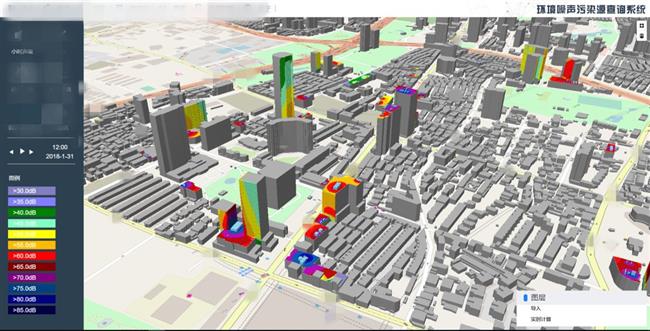 There is noise pollution source on the roofs of some buildings.