Buckle up for first stage of greenbelt 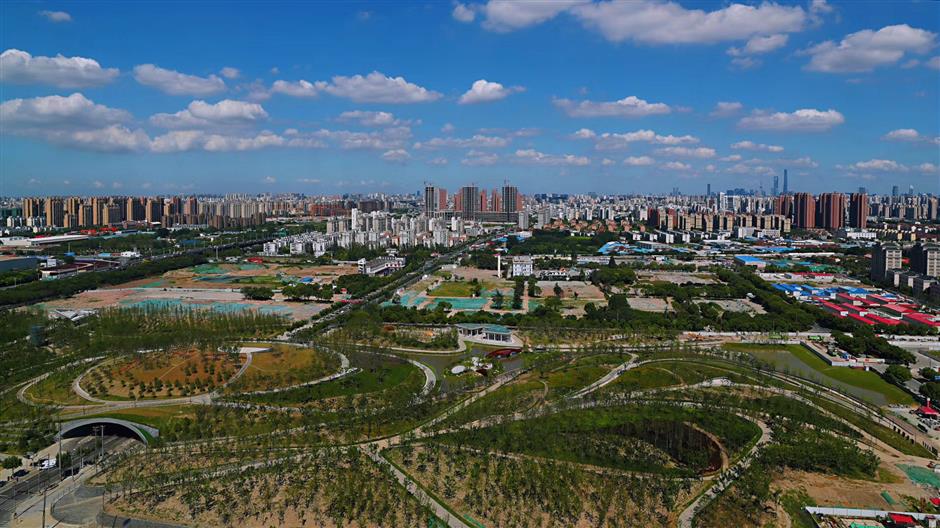 A bird’s-eye view of the under-construction Taopu Central Greenbelt. It will cover a total of 500,000 square meters, becoming Shanghai’s largest downtown public greenbelt upon its completion in 2020. 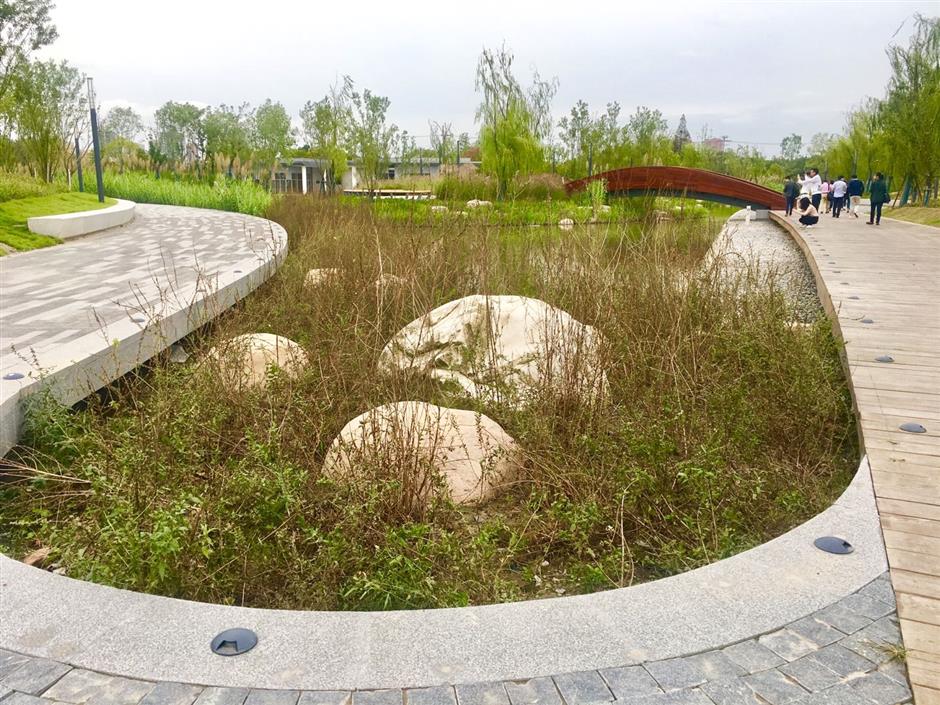 Visitors at the still under-construction greenbelt in Putuo District. The initial phase of the greenbelt will officially open to the public by the end of October.

The initial phase of Shanghai’s largest downtown public greenbelt, which features natural landscapes and its industrial heritage, will open to the public by the end of the month in Putuo District.

The Taopu Central Greenbelt, which will cover 500,000 square meters upon completion in 2020, is being built on the site of a number of China’s earliest industrial plants and the popular Tongchuan Road Aquatic Product Market that was shut down in 2016.

The first phase in the northern part of the project covers about 150,000 square meters on the south of Hujia Expressway, which is equivalent to about 20 football pitches.

Standing on top of an artificial hill in the greenbelt, dubbed the “second tallest mountain” in the western downtown, visitors can see the former site of the city’s once popular “peony ink” factory, a soap factory, a paint plant and the famous “White Elephant” battery factory, said Qiang.

Several industrial heritage items have been preserved. The city’s earliest rubber plant on Dunhuang Road will be converted into a visitors’ center. And a stone statue of Chairman Mao at the former factory has also been kept, Qiang said.

Visitors can also find some historical sites within or near the greenbelt. Not far from the initial phase of the project, a Han Pagoda, from the Southern Song Dynasty (1127-1279) has been well preserved.

The greenbelt is part of the Taopu Smart City, an “intelligence and innovation zone” being developed on the city's earliest chemical industrial park.

Taopu chemical park has since the 1950s housed industrial giants such as the Hero Pen Factory and Shanghai No. 1 TCM factory.

The pen factory has also been retained within the smart city to showcase the development of China’s typical state-owned enterprises.

The future smart city, covering 4.2 square kilometers in the core area, aims to attract a swath of companies focused on the Internet, intelligent science and entrepreneurship.

These will fulfill the city government’s ambition to become a “scientific and innovation center with global influence,” according to the district government. 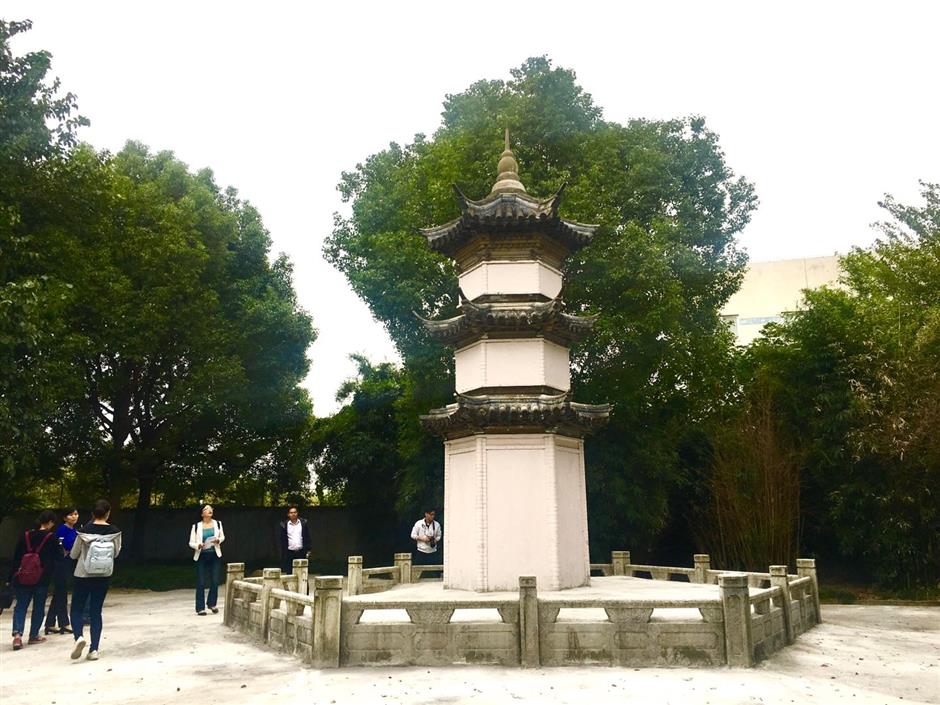 Visitors admire the Han Pagoda near the initial phase of the Taopu Central Greenbelt.

The government has been relocating factories, recovering lands and conducting an “ecological remediation” of the soil that has been contaminated by the factories.

One of the highlights of the greenbelt is an automated purification system.

Sewage will go through a homogenizing process and then enter a sedimentation tank to separate out the solid matter. Chemical treatment will then be conducted to remove petroleum hydrocarbon and organic pollutants.

Taopu was among the first batch of chemical industrial parks in Shanghai. Set up in 1954, the development of its industrial enterprises was at its peak in the 1980s when Hero pens and locally produced perfumes became popular merchandise in Shanghai.

The district government launched the construction of the Taopu scientific and innovation zone in 2014 to wipe out the polluting factories, and implement a major face-lift for the industrial region.

Apart from the greenbelt, construction is under way on an integrated pipeline system, a high-tech commercial and business park as well as a US international school.

The smart city project is expected to help Taopu, which literally means “peach river,” return to its original idyllic environment.

It was once an agricultural village with a small creek and peach trees on both sides, an official with the district government said. 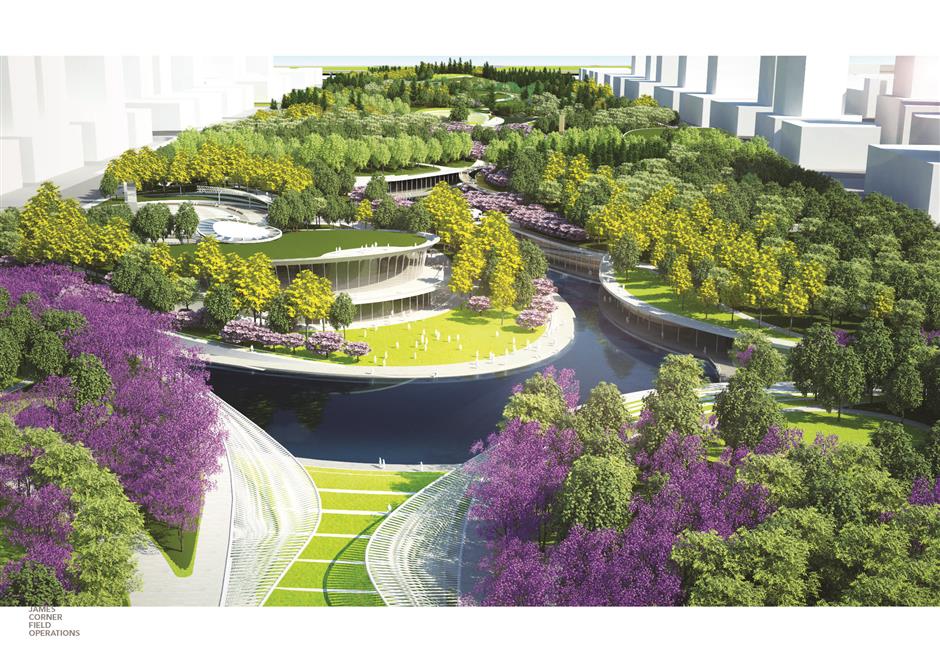 An artistic rendition of the Taopu Central Greenbelt, which covers a total of 500,000 square meters and will become Shanghai's largest downtown public greenbelt upon its completion in 2020.