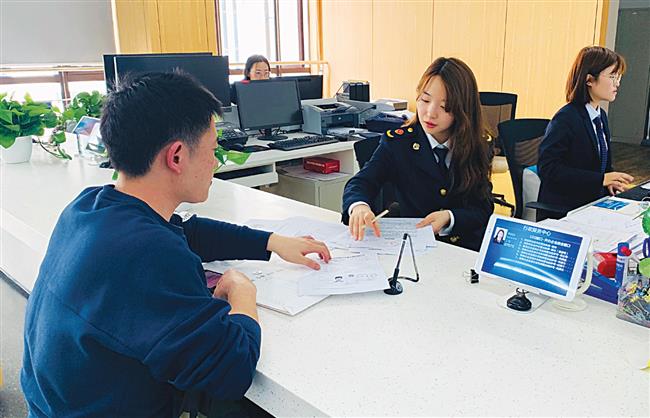 A company representative applies for business registration at a one-stop service platform launched by the Putuo government.

New companies based in Putuo can now register at single specialized sections, thanks to the innovative scheme jointly launched by the district’s market watchdog, taxation bureau and administrative service center.

Previously, applications were made at the service windows of several different governmental bodies. The paperwork required at the service center has also been reduced from 39 to five.

Amid a citywide campaign to offer streamlined services to companies with an optimized business environment, Putuo has taken a lead among local districts to release the 2.0 version of its reform plan.

A group of service specialists, selected from the district’s market supervision, and taxation and administrative service center, have been on duty to offer bespoke services to each Putuo-based enterprise.

These specialists nicknamed “Pu Xiao Er,” literally meaning “waiters of Putuo,” have been trained with all kinds of services to make it more convenient and faster for the companies. They are familiar with all application procedures and can work out the best and fastest way based on the needs, according to the service center.

After receiving such tailored services at the specialized service counter, Li Xiaolin, financial director of Shanghai Yiming Auto Sales & Service Co, said: “It was hard to imagine the taxation issues could become so convenient now. I have been doing finance for almost 20 years and Putuo’s service should be rated as five-star.”

She said it used to require various certificates, contracts and other materials to start a business.

Li also had to fill out a thick pile of forms and go to a lot of government departments and service windows.

Putuo opened its comprehensive administrative service center in April 2017. Now the district aims to further upgrade the “one-stop” into “single service window” to improve the efficiency.

The administrative service center has established a warehouse to store invoices, so that tax payers can get the receipts they need immediately.

The district government has pledged to further cut the application and approval time by half this year, while companies will be allowed time to finish various applications and registrations through the one-stop website or service window, said Putuo director Zhou Minhao.

In 2018, the district launched a “3+5+X” industrial policy system to optimize the overall business environment in terms of corporate services and talent development. With all of this effort, its industrial structure has been further optimized.

For the first time in the past 15 years, the contribution of the modern service industry to the regional economy has surpassed the real estate industry in Putuo. Among them, the number of enterprises with a total tax of more than 5 million yuan (US$746,268.66) reached 552, an increase of 49 from 2017, according to the Putuo government.