Murder? Time to call in a forensic expert to sift through clues 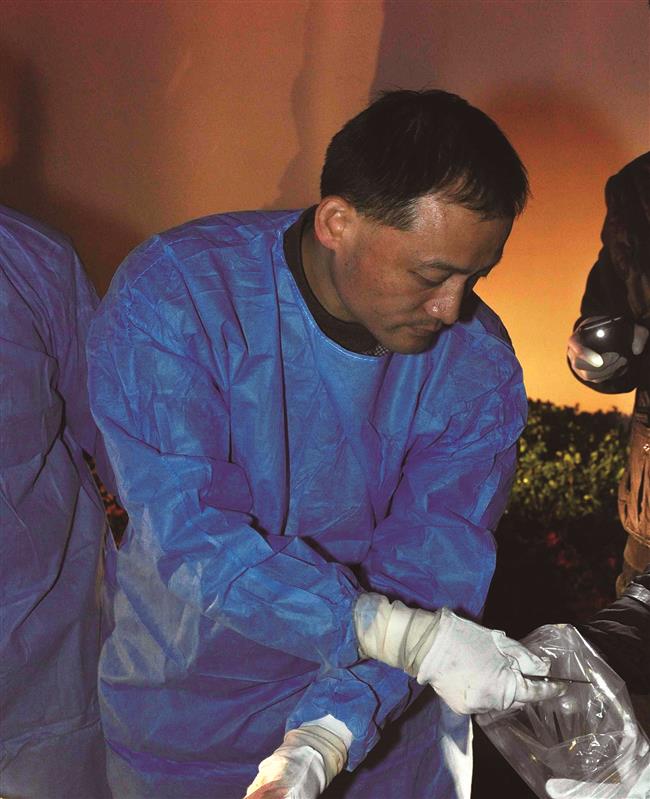 Ma Kaijun, a top forensic expert at the Shanghai Public Security Bureau, and his colleagues gather evidence from a corpse at a murder scene.

Ma, 44, is a top forensic expert at the Shanghai Public Security Bureau. He was named a “Shanghai Standout” in 2018, an award that recognizes excellence in the city’s workforce.

Born into a farm family in east China’s Anhui Province, Ma initially pursued his medical dream by entering Shanghai Medical University, the forerunner of Fudan University’s medical school, but there he switched to forensic science.

“That was the opportunity and challenge that life brings,” he said. “Though I ended up forsaking my childhood dream, I had no ambition other than to do well any job I undertook.”

Textbook knowledge is far from enough for a forensic expert. Ma became a workaholic in pursuit of excellence, virtually living in the Public Security Bureau before getting married.

Apart from attending crime scenes, he spent a lot of time studying cases and doing experiments with the bones of the dead. In those days, parts of the human breastbone and pubic bone had to be boiled, so the soft tissue could be dried for forensic determination of age. Ma learned from mentor Min Jianxiong, a leading expert on his team, how to use costal cartilage in forensic investigations.

“It takes about half an hour to treat a piece of costal cartilage, and it takes longer to experiment with other kinds of bones,” he said. “Back then we didn’t have more modern technologies to help with in making an accurate and efficient judgment.”

Another important part of Ma’s work is to determine the nature of wounds, whether self-inflicted or inflicted by someone else. That leads to concluding how a person died. Murder? Suicide? Accident?

Over the years, the tools of the trade — scissors, tweezers, clamps and rubber gloves — have remained part of forensic work, even with advances in technology. The job requires a wide range of knowledge, a highly logical mind and a lot of experience.

In one case in suburban Shanghai, a woman was found dead in a river near a bridge, one day after an argument with her boyfriend. An e-bike she was riding was found broken on the bridge, and the boyfriend was missing. Obvious conclusion? No.

The woman had shallow bleeding spots in her neck, but Ma ruled out the possibility of a murder.

“In fact, such wounds are usually formed due to raptured vessels during convulsion and not from choking,” he said.

The boyfriend’s body later turned up in the river after some time, and police eventually concluded that the pair had committed suicide due to relationship problems.

In another case, a woman found dead in a river had a few bruises on her body. Ma and his colleagues were brought in. They concluded that the bruises were not the result of a beating, but rather were caused by the body repeatedly bumping against a bridge.

“It’s important that we forensic experts judge whether a case is a murder or not because once a murder is established, the police will invest a lot of time and resources into the investigation,” he said.

Their job also involves untangling lies, such as people who chop off their own fingers to get insurance money.

In one case, a home helper who stabbed herself in front of her employer told the police that her employer had stabbed her. A careful analysis of her wounds revealed her accusation to be false.

“We have surveillance cameras and other means to show us what happened in a case, but they may not be available in many cases,” Ma said.

One of the grueling parts of the job is dealing with fresh corpses.

“We have to prepare ourselves for feeling nauseous and loathsome toward a perpetrator,” Ma said.

“We have to do our job professionally and not let our personal feelings get in the way.”

Ma recalled one case where the body of an old woman living on her own was discovered some months after her death.

“When I stepped into the room, the entire space was permeated by odious and stifling particles,” he said. “I washed my clothes after work that day, but the smell wouldn’t go away.”

He also recalled a summer day when he found that the itch on his neck turned out to be a maggot from a dead body.

“When I focus on my work, really nothing can distract me,” he said.

When Ma started out, specific rooms for autopsies weren’t always available and dissection had to done at mortuaries.

“With cold air blowing my back and after squatting there and working for two hours, I could hardly stand up,” he said.

Besides casework, Ma and his colleagues also do academic studies, including research on diatoms, time of death and patterns of bloodstains.

Diatoms, a single-celled alga, are often found in the lungs and livers of people who died from drowning. The study of different types of diatoms can help determine the location of drownings.