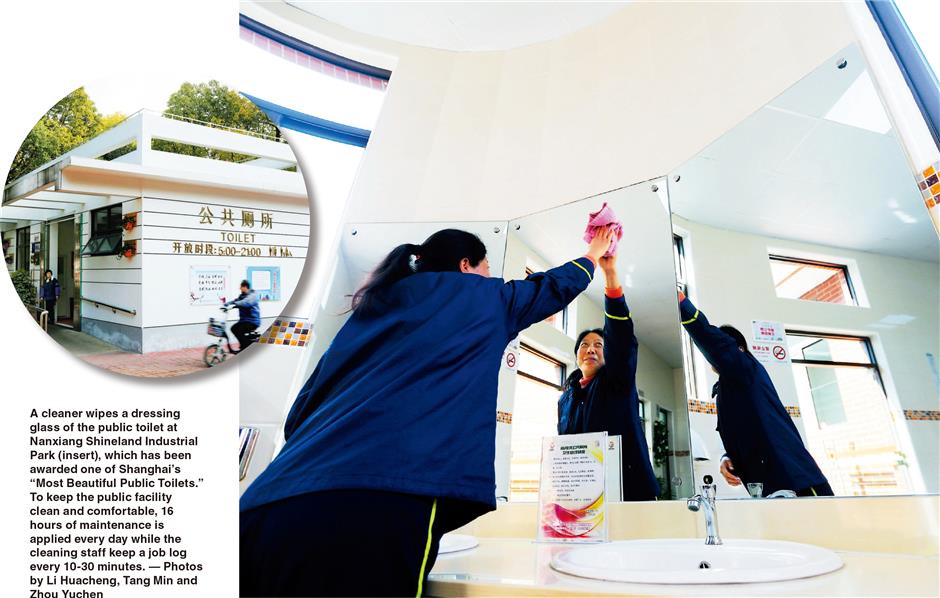 A cleaner wipes a dressing glass of the public toilet at Nanxiang Shineland Industrial Park (insert), which has been awarded one of Shanghai’s “Most Beautiful Public Toilets.” To keep the public facility clean and comfortable, 16 hours of maintenance is applied every day while the cleaning staff keep a job log every 10-30 minutes.

Kitchens, it is said, reflect the material level of a civilization while toilets show the development of its spirit. They are not only about people’s livelihoods, but also a measure of a civilization.

‘Beautiful public toilets’ The public toilet at 996 Qipan Road, in Jading’s Juyuan New Area, is a good example showing how a city’s facilities are related to its economic and civilized status.

The toilet, after a two month renovation, lifts the spirit of passersby with its renewed facade and its improved user-friendliness.

It is equipped with emergency call equipment, a third restroom for parents with little children of the opposite sex, inductive flushing facilities and deodorant fans.

“The renovated toilet provides thoughtful services for users. By paying attention to every detail, we present qualified services,” said a Juyuan official.

Another public toilet at Nanxiang Shineland Industrial Park stood out among over 280 public toilets citywide to be named as one of Shanghai’s “most beautiful.”

The toilet, covering an area of 114 square meters near the Huyi Highway entrance of the industrial park’s A Zone, is in the design of Australian public facilities.

Its facade is shaped like a curve and is connected with two passages on both sides.

The toilet is well equipped with third restroom facilities such as baby chairs and a multifunctional baby changing area. Users will also see sofas, battery chargers and emergency call equipment inside the toilet.

In addition, the toilet’s female to male cubicle ratio has been raised rationally. And it is maintained for 16 hours a day. The toilet is also surrounded by landscape plants and its manhole covers and walls are decorated with colorful drawings. 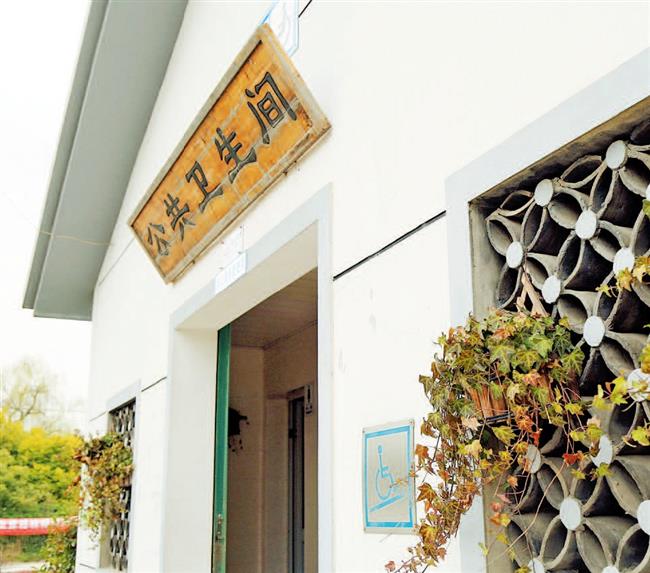 A public toilet at Lianjun Village, Huating Town features the decor of a classic Chinese garden.

More public toilets are being built in Jiading as the population grows. Currently it has 948.

This year, Jiading will continue to promote the establishment of “beautiful and civilized public toilets.”

In the process of building and renovating public toilets, careful consideration needs to be paid to what extent the quantity and quality of rural public toilets is reasonable to avoid wasting money or land resources.

But the “toilet revolution” is not just about the construction and renovation of facilities. It also necessitates changing the behavior of the people who use them.

People need to pay more attention to their toilet hygiene and how to use public facilities with care.

The district’s health commission, greenery and sanitation bureau and water authority organized a survey and issued a report on the status of Jiading’s toilet revolution.

It points out that the overall standard of public toilets is not high and residents are backward in how they use the facilities.

So far Jiading has a total of 948 public toilets. Among them 182 are sanitation toilets, accounting for 19.2 percent of the total number of public toilets.

Toilet campaigns around the world

Throughout the world, toilets have been an important issue.

The “Great Stink” in central London in the summer of 1858 killed more than 14,000 people after hot weather exacerbated the smell of untreated human waste and industrial effluent present on the banks of the River Thames. The fumes were thought to transmit contagious diseases.

The crisis forced London to begin large-scale renovation of its drainage systems.

South Korea launched Saemaul Undong, also known as the New Village Movement, in 1971 to solve its toilet problem to a considerable extent.

No matter East or West, there has been a toilet revolution. Toilets are so important that the 67th United Nations General Assembly established November 19 each year as World Toilet Day.

Compared with other parts of the country, particularly inland areas, Shanghai has a higher level of economic development. Hence, Shanghai is at the forefront of the toilet revolution.