Learning how to sort trash is on the cards

Garbage recycling is all the rage nowadays, but back in the 1990s when Niu Guangchen’s family got into the trash business, it was considered a low-class job for the uneducated.

He runs the business with his father-in-law and son. And Niu has come up with an innovate idea for reminding people which waste goes into which bins.

“We were living in a village of farmers who thought recycling was beneath them, even though they weren’t so posh either,” said Niu. “Later, many villagers moved away to be resettled into new houses and lead better lives.”

Public attitudes toward recycling have changed dramatically. With the implementation of strict new Shanghai regulations on garbage sorting on July

1, Niu has become a respected expert on the subject.

“People’s mindsets have been altered,” he said. 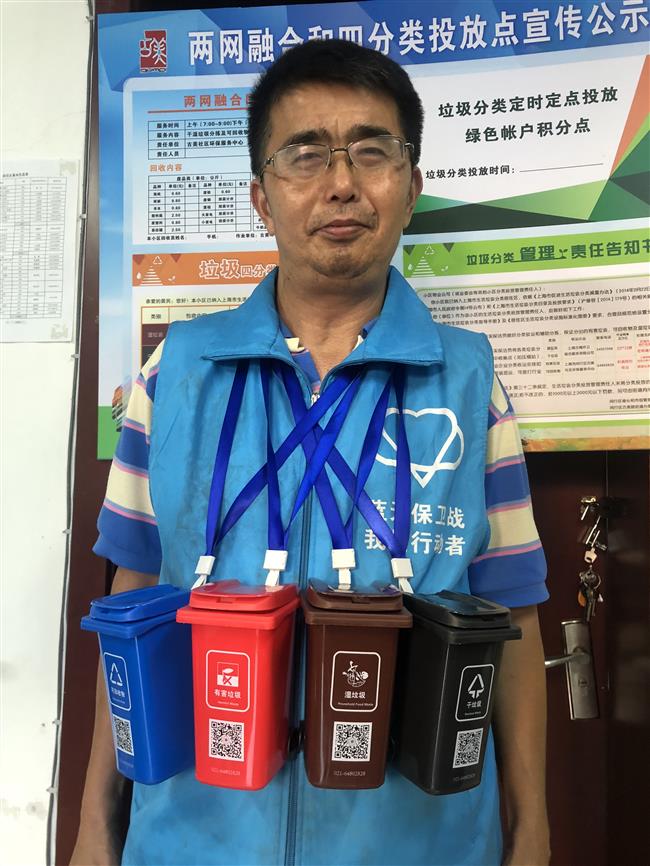 The Gumei subdistrict in Minhang District , where Niu has worked and lived for decades, was a pilot site for one of the earlier garbage-sorting campaigns in 2010.

“It took about three years to build up the concept of recycling among residents,” said Niu. “At first, you couldn’t find one in 100 who were interested.”

But as local leaders and some eco-friendly residents began to promote recycling, things started to change.

Niu watched and observed how his father-in-law recycled garbage and then sold it to earn money. He set out to make the operation larger and more professional.

“I have been writing letters to the government ever since I stepped in the industry,” he said. “They sometimes visited me but rejected my ideas. I think one person alone can’t start a trend. It needs the power of government support.”

Earlier this spring, Niu discussed the concept of garbage sorting while playing cards with friends.

“They were complaining about garbage sorting, saying it’s impossible to remember which category each item belongs to,” Niu said. “I asked, ‘How could it be so difficult? Would you remember it if I stuck a list to your head?’”

It was just a joke, but that idea sparkled something in his mind. Why not design a poker card with garbage-sorting information printed on it? Players would constantly see it and absorb the knowledge eventually.

So he set out to redesign card decks.

Poker cards designed by Niu to help people remember which trash goes into which garbage bins.

Spades, clubs, diamonds and hearts were paired with dry, wet, recyclable and hazardous wastes. Niu changed the color of clubs to brown and diamonds to blue to match the color of categories of waste bins. The cards quickly became a hit in his neighborhood, and word spread when Niu posted the idea on his WeChat account.

More than five media outlets picked up the story and Niu became the only Shanghai resident to win an award from the Ministry of Ecology and Environment.

Niu improved the design of the poker cards last month. He also created a WeChat program that allows residents to type in a kind of trash and see which bin it belongs in.

“Residents play the most crucial role in rubbish sorting,” Niu said. “If they don’t sort properly, then it’s impossible for collection and transportation companies to do their work. And if anyone is still confused after using my program, they can just phone me.”

Niu is urging the government to create the city’s first institute for the study of garbage. Such a site would allow people to measure progress, discuss new ideas and promote public education, he said.

The tough new regulations that came into effect on July 1 have stirred complaints. Some residents say not enough bins are being provided for wet and hazardous waste in public areas.

Others say that requiring people to carry around bags for trash when they are out and about and then dispose of the bags when they return home is impractical.

They also complain that neighborhood trash disposal sites are open too few hours every day, making it hard for people who do shift work.

Niu agreed that there needs to be more flexibility. He suggests that monitors be set up in communities to collect garbage bags that people couldn’t deposit during designated hours. He also says the size and locations of disposal sites should depend on the size of a housing estate.