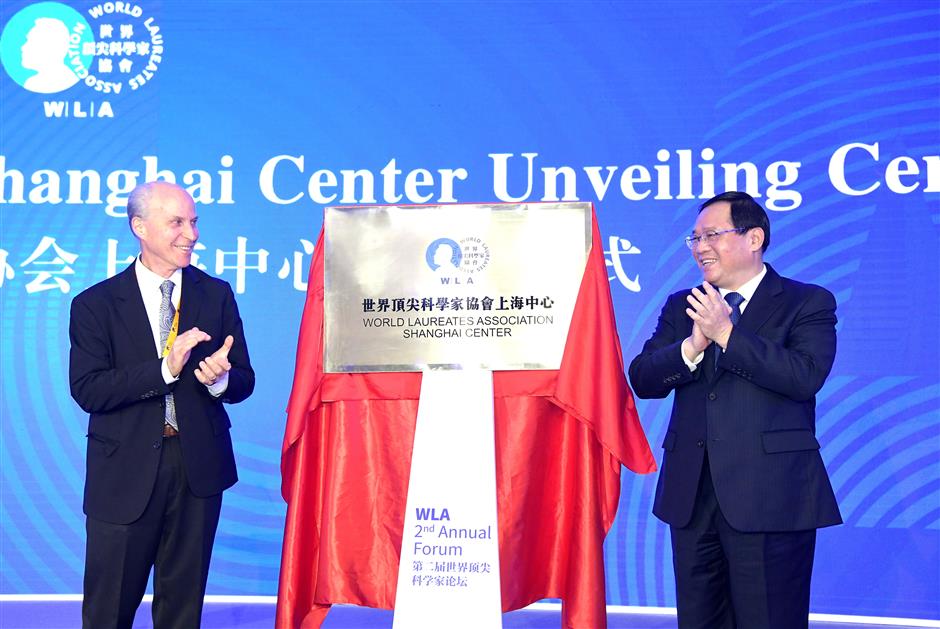 Shanghai Party Secretary Li Qiang announced the setting up of the Shanghai Center of World Laureates Association at the second World Laureates Forum in Lingang New Area on Tuesday.

The center will be in charge of the forum activities in the future, contacting top and budding scientists, organizing WLA conferences, providing working space, holding communication events and releasing research results.

Chinese President Xi Jinping sent a congratulatory letter to the forum which was read out by Li at the opening ceremony on Tuesday. Among the dignitaries were 65 scientists from across the world, including 44 Nobel laureates.

China is willing to work with all the countries in the world to strengthen research and collaboration to promote sci-tech and address the challenges of our age, he said.

Xi noted that China attaches great importance to the development of the frontier fields of science and technology and is committed to promoting global cooperation in sci-tech innovation.

China will strengthen international sci-tech exchanges with a more open attitude, and help transform the wisdom and research achievements of Chinese and foreign scientists into a powerful momentum for economic and social development through platforms like the World Laureates Forum, Xi said.

He expressed the hope that the representatives at the forum would promote basic science research, advocate international cooperation, support the growth of young talent and contribute to a better future for mankind.

Li said President Xi's letter showed Shanghai the way to enhance international science and technology innovation, cooperation and promote the establishment of a community with a shared future for mankind.

He said Shanghai will firmly plant itself on the road to science and technology innovation. The city will open its doors wide, boost the flame of innovation, build a better environment of inclusiveness and promote innovation with more vigor and vitality.

Li pointed out that the city will be making efforts to advance the three major tasks President Xi assigned to Shanghai and accelerate the construction of a science and technology innovation center with global influence. It will serve as an important platform for Shanghai to serve the country and go global, provide the stage and space for innovation and entrepreneurship, and support innovative practices at a higher level, larger size and more imagination.

He said the city will strengthen innovation, focus on the nation's strategic needs and keep increasing its funding for basic research and the application of foundational research. It will concentrate on planning, especially in fields like health, resources and environment and material science.

It will also pursue planning and pushing forward science and technology innovation with a global vision and provide first-class innovation resources and opportunities.

Li emphasized that Shanghai is willing to deepen its cooperation with world top scientists and hopes they can visit the city more often for academic exchange and scientific research collaboration. That can help the city to become an integrated hub for science and technology and trial out new technologies and industries in the city.

It can also help Shanghai to cultivate young talent in their respective field.

Roger Kornberg, chairman of the World Laureates Association and 2006 Nobel Prize winner in chemistry, said the WLA Shanghai Center will make contributions to scientific research and development for Shanghai, China and the whole world.

The center will strive to have deep strategic cooperation with the nation's science and technology authorities, regional governments, large-scale state-owned firms and private enterprises and work with them together to set up an international platform with the world laureates to be its core engine to gather energy.

"The WLA Shanghai Center has a 10-year plan and the community will be a part of it," Chen told Shanghai Daily. "The community will have more than 30 hectares and include space for forums, exhibition center, industry incubator and the scientists living quarters."

"Last year we conceived the idea, this year we have a plan and next year we will start the construction."

So far, 40 world scientists have backed the WLA Science Community. The community will integrate the resources from famous domestic universities and research institutes and have a diverse research team.

It will focus on industries like biological medicine, artificial intelligence, new energy, new material and quantum science. It will combine production, study and research as well as integrate basic research, technology transformation and industrial production to form a complete chain for scientific achievements.