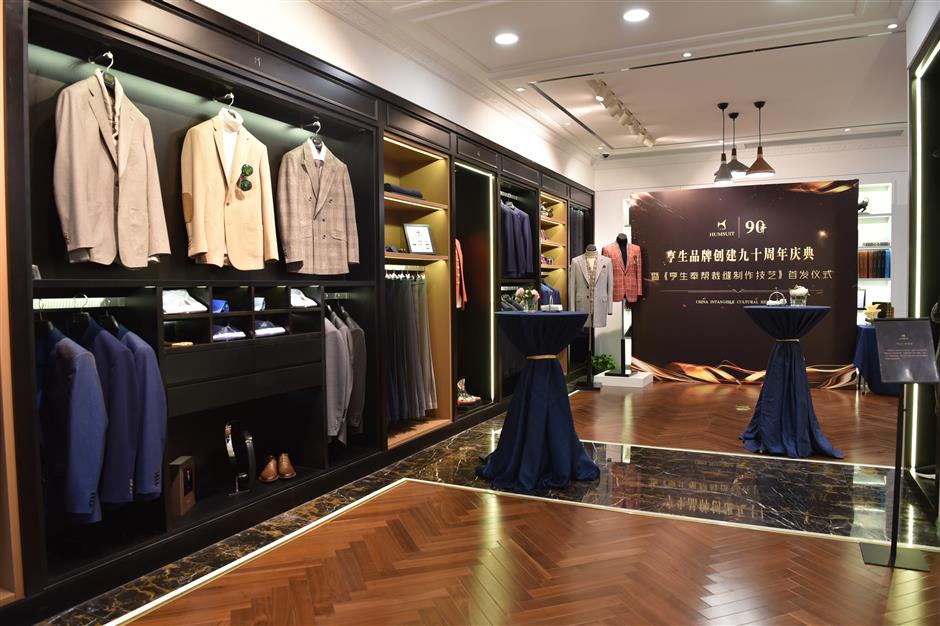 The flagship Humsuit shop on Shaanxi Road N. in Jing’an

Heritage-listed tailor Humsuit celebrated its 90th anniversary this month by publishing a book detailing its history and the trade secrets of decades of exquisite styling.

Humsuit, which sounds a bit like “handsome,” was founded in 1929 by Xu Jisheng, an inheritor of the Fengbang tailoring style that started in Ningbo at the end of the Qing Dynasty (1644-1911) and later spread to Shanghai.

In the early 20th century, Shanghai was renowned not only for cutting-edge ladies' fashion. The city was also at the forefront of revolutionizing Chinese menswear, ushering in the change from traditional gowns to modern suits, in both Chinese and Western styles.

The first Western suit shop in Shanghai opened in 1896. In 1905, the Sun Yat-sen jacket appeared on the scene, and the first catalogue featuring Western suits was published in 1933.

Humsuit utilizes nearly 200 steps in making a suit. Its tailoring skills were listed as an intangible cultural heritage in China in 2011.

Master tailor Xiao Wenhao, who was honored with a “Shanghai Standout” award for excellence in the city’s workforce, plies his skills in Humsuit’s outlet on Shaanxi Road N. in the Jing’an District.

“Why does Humsuit, as an old brand, still thrive and have such an enduring appeal?” he asked. “Because of our unique skills.”

Like many old venerated brands, it’s often hard to find young people willing to carry on tradition. Xiao said that is also true in tailoring. The traditional way of masters passing on their secrets to students just doesn’t work anymore. So, a book is needed, he said.

The book, with illustrations, may attract some interest among the younger generation, which would be good for Humsuit, he said.

Earlier this year, the store held a wine party and fashion show to try to drum up business. On display we Sun Yat-sen suit.

“We want to cater to younger customers,” said Chen Weifu, general manager of Humsuit. “Young people don’t want to be restricted to traditional suits. So, we’ve changed it from formal attire to a casual jacket.”