Medical workers from Yueyang Hospital of Integrated Traditional Chinese and Western Medicine have been giving novel coronavirus disease patients at Wuhan's Leishenshan Hospital acupuncture, an effective treatment for those with problems such as insomnia and migraines.

Other traditional Chinese medicine therapies, such as herbs, moxibustion and acupoint plaster application, are also being used but acupuncture is the most popular with patients.

A combination of acupuncture and herbal remedies can have a better effect, the hospital said.

Liu and her daughter are among those who have benefited. On February 9, Liu's husband began coughing and had a fever.

A scan of his chest showed something abnormal and he tested positive for coronavirus. Liu and her daughter began to show symptoms four days later and were confirmed as infected.

"I worried about my husband's health so much and suffered insomnia. I stayed awake all night and had pain in my chest," Liu said.

She added: “Doctors from Yueyang Hospital performed acupuncture on us and it really worked. Now I can sleep well at night and the pain in my chest disappeared."

Liu, her husband and her daughter were discharged from hospital on March 1.

"A 35-year-old patient Shi was typical of someone with qixu, or deficiency of life energy, in traditional Chinese medicine. She often felt great oppression and pain in her chest in the morning and became short of breath at night," Gong said.

Since she was afraid of acupuncture, they first prescribed some herbal medicines but to no obvious effect.

However, after acupuncture, her condition improved in just three days. "She then asked us to perform acupuncture on her every day."

Another patient was a 56-year-old woman surnamed Ye who had a cough and migraine for a month and had to take painkillers every night before she was hospitalized.

After receiving acupuncture five times, her migraine had gone.

"Auntie Ye then promoted our traditional Chinese medicine therapies in her ward. Every time there was a new patient, she would ask him or her to have acupuncture."

Dr Wang Zhenwei said the acupuncture therapy given in Wuhan was a special one worked out with colleagues in Shanghai based on coronavirus disease patients' conditions.

The needles used were not the usual ones. "Since the medics are all dressed in protective clothing and wearing goggles, masks and gloves, if it's the common needle, they couldn't hold it tightly and may hurt themselves. So we wrap the needle with a single-use tube."

Acupuncture is being used on critical patients along with Western medicine to prevent their condition worsening. 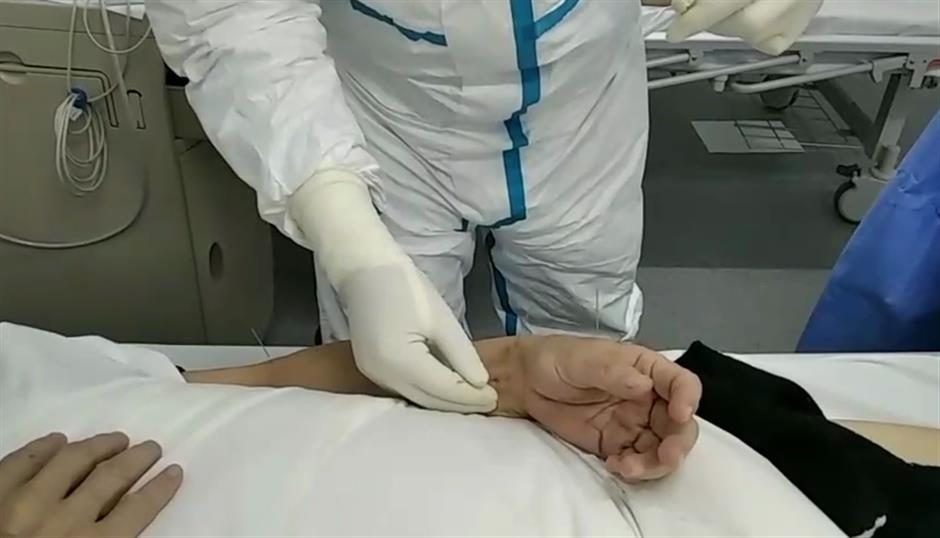 A doctor from Yueyang hospital conducts acupuncture on a patient.

Wu, an 81-year-old critical patient, was unable to talk after being sent to hospital.

"Her oxygen saturation in her blood was only 69 percent and the CT scan showed that her two lungs were both damaged by the disease," Wang said. "She also had some other diseases including diabetes, high blood pressure and renal insufficiency."

That meant she could suffer respiratory failure or multiple organ failure at any time.

"Our team soon designed a plan for her with integrated treatment of Western medicine and traditional Chinese herbs and acupuncture."

Wu’s confition gradually improved and the oxygen saturation in her blood was restored to above 95 percent.

She was released from hospital on March 13 and thanked the medics for saving her life.

"I said 'happy holiday' to Dr Zhou who is a traditional Chinese medicine doctor," said Zha Qiongfang, a doctor from Shanghai’s Renji Hospital working at Jinyintan Hospital in Wuhan. 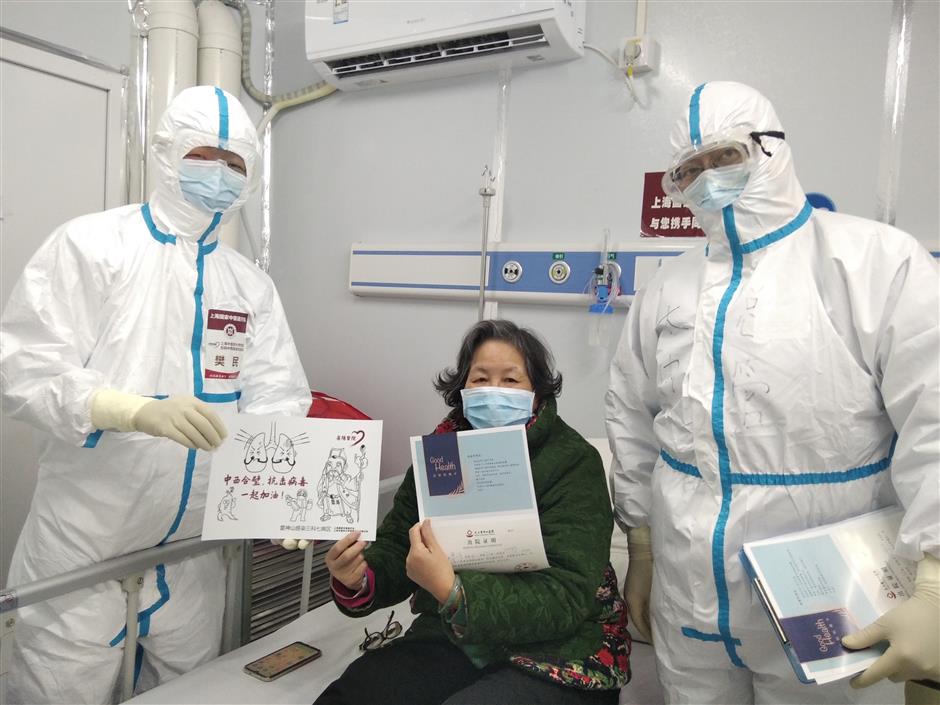 Two traditional Chinese medicine doctors from Yueyang Hospital celebrate the recovery of a patient who they had treated with acupuncture.