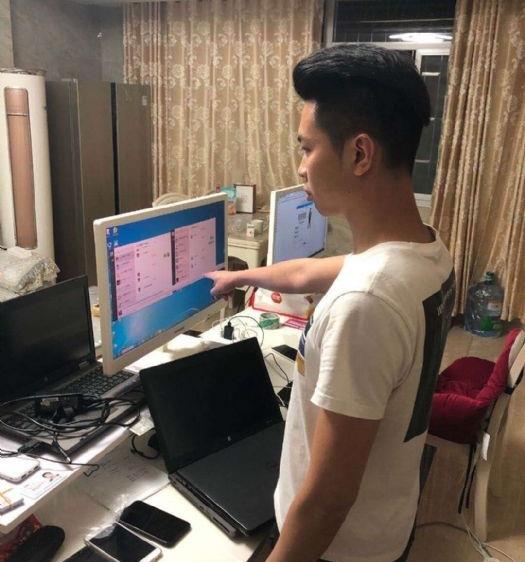 One suspect is pictured in the room where he allegedly blackmailed victims.

Five suspects have been caught for allegedly blackmailing men who shared nude images of themselves online, police said on Monday.

Police in Huangpu District started investigation after a man surnamed Li filed a report on the matter in April.

Li claimed that he received a friend request on QQ, a popular Chinese instant-messaging application, and then got a video message of a nude woman from the contact in question. Li then started a video chat with the person in which he showed his face and private parts.

After the chat, Li was told to download another app on his phone, and soon he received his nude video and a text document of his phone contact list. Two men he didn’t know also began calling him and threatening to spread the video to his contacts if he didn’t pay 1,000 yuan (US$140), police said.

Li complied and paid but was further blackmailed, before reporting the case to police.

Police located the suspects believed to be behind the scheme, who were based in Fujian and Jiangxi provinces, and rounded them up at the end of last month.

The suspects were taken to Shanghai earlier this month and have allegedly confessed.

Police said over 10 people have fallen victim to the gang, and investigation is still underway.