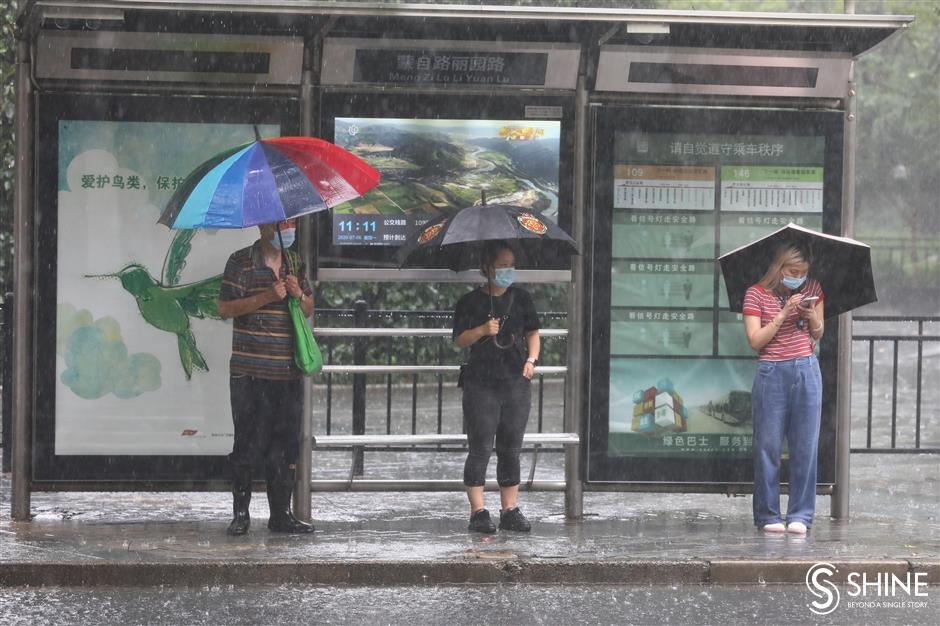 People wait for buses in the heavy rain, which hits the city on Monday morning.

The Shanghai Meteorological Bureau upgraded its blue rainstorm alert to yellow — the second-lowest level in its four-color system — at 10:05am, warning that rainfall could reach 80 millimeters in the following six hours.

An earlier yellow lightning alert remains in effect, while a new yellow warning for gales was issued at 10:05am for the next six hours.

Shanghai's flood prevention office raised its emergency response level from four to three at 10:05am due to the heavy rain.

Weather bureau data showed that by 1pm, Dongping Town in Chongming District had the highest precipitation at 195.7 millimeters. The highest hourly rainfall was in the Caoyang area of Putuo District at 69.8 millimeters.

Emergency plans for water removal have been implemented, including the use of mobile pump trucks and drainage controls.

The office has reminded local departments to pay particular attention to key areas such as communities, roads, underpasses, low-lying areas and construction sites.

Ten of the city’s underpasses had water levels above 25 centimeters on Monday morning due to the rain. Those affected are in Jiading, Minhang and Jing’an districts. The underpasses were closed to traffic as emergency crews arrived to drain the water but had reopened by noon.

Some city’s bus routes stopped operating due to the downpour, including those running mainly in Putuo and Jiading District such as Lines 136, 105 and 63.

Some lines also had to alter routes to avoid water-clogged areas.

Jiushi Bus Group has taken measures to safeguard the college entrance exam which takes place on Tuesday, Wednesday and Thursday.

It said two traffic conductors will be dispatched to key areas near schools to ensure the safety of students. Buses will slow down when passing exam areas and must not sound their horns.

Safety inspections of buses have been made in advance and emergency supplies including medical kits will be provided at terminal stations.

“Good maintenance of our buses is very important, especially during the flood season. We will try our best to drive students to exams on time,” said a spokesman of the company.

The park closes temporarily once a yellow rainstorm alert is issued, and its reopening depends on the weather, its operator said.

Shanghai's 27,000 sanitation workers have been stepping up road cleaning and increasing the frequency of clearing leaves on about 860 roads vulnerable to flooding, the Shanghai Greenery and Public Sanitation Bureau said on Monday.

They are stepping up removing garbage from drainage outlets to ensure smooth drainage, it said.

Inspections on outdoor advertisement billboards, signage and landscape lighting facilities across the city have been conducted, and about 210,000 safety notices issued, the bureau said. All safety hazards found during inspections have been rectified so far, it said.

Trees with potential safety hazards have had branches cut or fixed before the rainstorms to eliminate safety concerns, the bureau said.

Over 30 flights were canceled at Shanghai’s Pudong and Hongqiao airports, and several others were delayed or diverted to land at other airports on Monday morning due to lightning and rain.

Local air traffic controllers issued a yellow alert, the third-highest in a four-tier system, for flight delays at both airports and expect takeoff and landing capacity to be reduced by 30 percent up to 4pm.

The alert was later extended, meaning takeoffs and landings in Shanghai could be reduced further through 8pm.

Twenty flights had been canceled at the Pudong International Airport as of 11am. Another flight had to be diverted to a nearby airport, while two others were delayed for about two hours.

Six flights were canceled at the Hongqiao International Airport, and seven had to land at nearby airports.

Travelers are being reminded to check the latest flight information and contact airlines to avoid being stranded.

The heavy rain is expected to give way to a mix of overcast and rainy skies by mid-week, with occasional thunderstorms.

Temperatures above 30 degrees Celsius will return by Wednesday, with muggy weather predicted to last into the weekend, forecasters say.

Takers of gaokao, China's national college entrance examination, whose written tests are on Tuesday and Wednesday with a listening test on Thursday, are advised to prepare for heat and bad weather.

Due to the novel coronavirus pandemic, the examination was delayed for a month. It will be the largest collective activity organized in China since the outbreak and it is the first time the exam will be taken in July since 2003.

Residents can check the latest forecasts on the bureau's website (www.soweather.com,) Weibo account and its mobile app.

It will be the first time the bureau has reported the weather for each of the 16 districts in the city during gaokao, said Geng Fuhai, a bureau official.

Students are being advised to arrive at examination sites with umbrellas at least 45 minutes early and choose suitable traffic routes due to the bad weather, according to the city's education commission.

If there is thunder during the English listening test, the doors and the windows of the examination rooms will be closed, the bureau said.

By 2pm on Tuesday, the city had suffered storms nine times during the flood season which began on June 1. As of Sunday, precipitation had been some 378.4 millimeters, 8 percent more than usual, according to the weather bureau.

"The subtropical high pressure in this summer is much stronger and the warm moisture continues to send moist air to southern China, which causes more rain than before," said Zhu Jiehua, a bureau official. "And the cold air from the north keeps flowing southward and conflicts with the warm air, causing the rainfall."

There is no exact date for the end of the plum rain season, Zhu said.

Many regions in China have experienced torrential rain this summer and some areas have suffered serious flooding.

By last Friday, the National Meteorological Center had issued national rainstorm alerts for 31 days in a row, for the first time in the past decade.

Wet conditions in the middle and lower reaches of the Yangtze River will continue for a few days as plum rain belts move north, the center said. 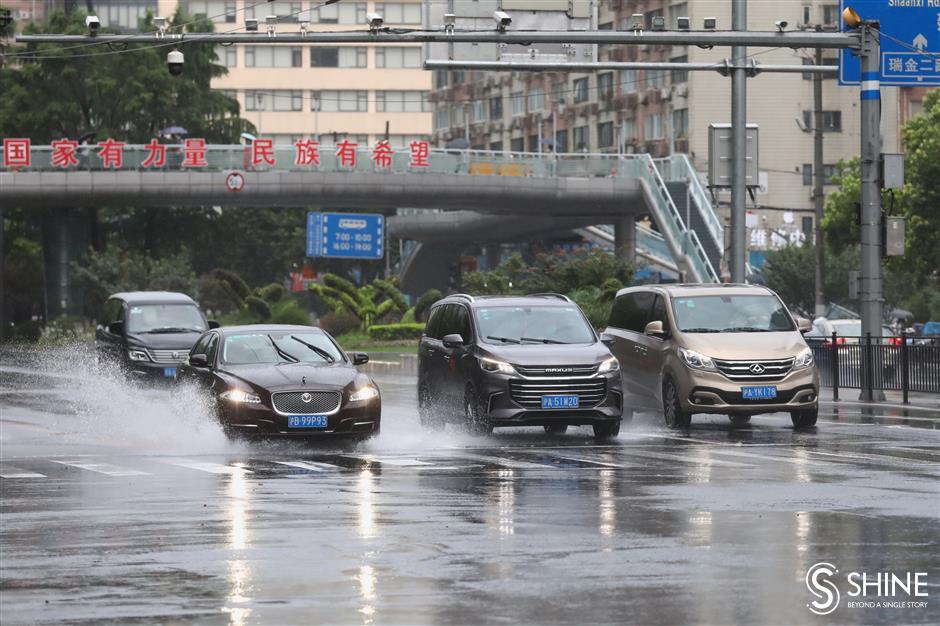