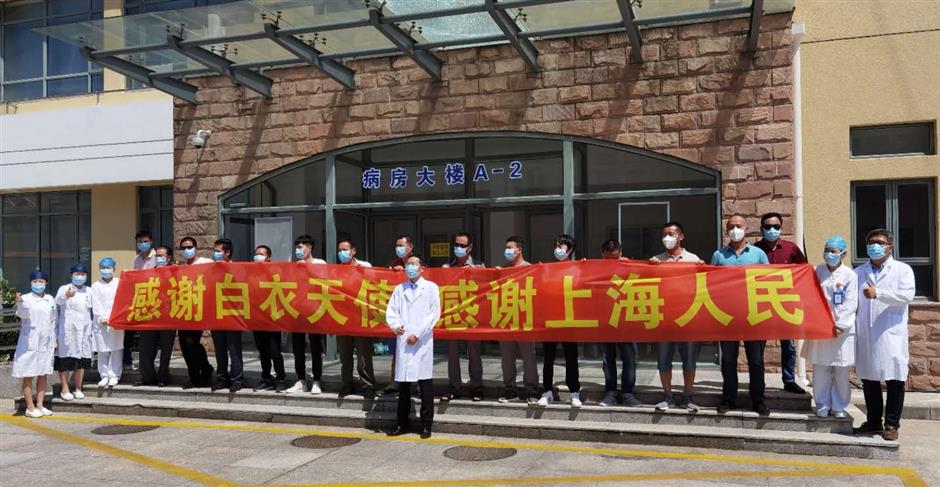 Fifteen COVID-19 patients are discharged from the Shanghai Public Health Clinical Center upon recovery on Wednesday.

On Wednesday, 15 imported COVID-19 patients were discharged from hospital upon recovery, according to the Shanghai Health Commission.

This was the largest number of discharged patients in a single day in three months, the commission said.

The commission said that all patients are Chinese, aged from 24 to 50 years old. They were diagnosed and treated at the Shanghai Public Health Clinical Center, a designated hospital for treating coronavirus patients, on August 6 and 9. They did not suffer severe symptoms.

“Thanks to all medical workers for their great efforts,” said a patient surnamed Wang on Wednesday, which is also China's Medical Workers’ Day.

A patient surnamed Sun said that testing positive for the coronavirus was stressful, but psychological counseling provided by the center helped put his mind at ease.

The local center has treated 820 patients, including 490 imported cases, since February, and 742 people have been discharged, said Zhu Tongyu, director of the center.

There have been seven local fatalities at the hospital, and its 71 remaining patients are all imported cases.

So far, Shanghai has reported 508 imported cases and 342 domestically transmitted cases. A total of 769 patients have been discharged upon recovery.