From farmland to China's window on the world

Deeply intertwined with the rise of the Pudong New Area, former Shanghai Vice Mayor Zhao Qizheng has earned the nickname of "Pudong Zhao."

As the man behind the opening-up of Pudong, Zhao oversaw the area’s development during its infancy in the 1990s. He led the first 800 officials, known as the “Pudong 800 Heroes,” to transform it from farmland into one of the world’s most spectacular financial and commercial centers.

Thirty years have passed since then. Today, one of Zhao’s favorite pastimes is to sit on the lawn of the Lujiazui Central Greenland, a local mini-version of New York’s Central Park nestled amid skyscrapers.

“Under a huge tent, as a shelter from the sunshine, you can have coffee or tea. The area used to be slums, but now it’s such a beautiful place,” he said. “Here, I received interviews with foreign reporters. They all appreciated the breathtaking view. But I said it’s just the tip of the iceberg of Pudong’s beauty.”

Having retired, Zhao said he plans to settle down in Shanghai.

“I will visit Pudong frequently to breathe Pudong’s air, lie on Pudong’s lawn and drink Pudong’s water,” he said, adding that every brick, stone and tree is a witness to the area’s development. 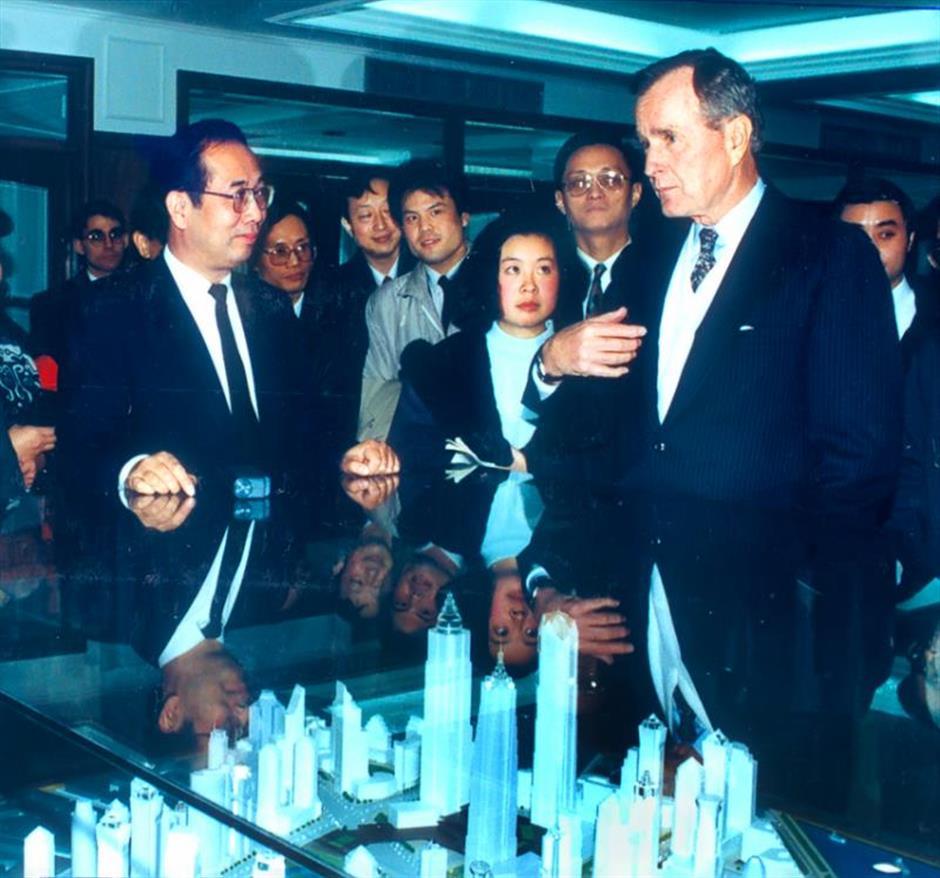 In this 1994 file photo, former Shanghai Vice Mayor Zhao Qizheng (left) introduces the blueprint of the Pudong New Area to the then US President George H.W. Bush.

Globally, many metropolises built along rivers, such as London and Paris, have seen balanced development on both riverbanks. It was totally a different story in Shanghai.

Puxi, the west bank of Huangpu River, became prosperous in the early 1990s, while across the river Pudong was a poor cousin. Even in the 1980s, it was said most people “preferred a bed in Puxi to a house in Pudong.”

“At that time, most of Pudong was farmland, shabby buildings and some old-fashioned factories,” Zhao said.

The turning point came on April 18, 1990 when China announced the development and opening-up of Pudong.

According to Zhao, it was the decision of the era.

In the 1980s, globalization became an irresistible trend. To make their voices heard on the global stage, countries chose economic centers as spokesperson. The US has New York, Chicago and Los Angeles, and Europe has London and Frankfurt. What about China?

Back then, Shanghai was the only candidate on Chinese mainland.

According to Zhao, the city has natural geographical advantages for being located in the middle of the “Asia-Pacific economic corridor,” which runs all the way from Japan to Singapore, linking major cities including Tokyo, Seoul, Taipei, Bangkok and Kuala Lumpur.

These cities have big economic potential. Investment in Shanghai can help attend to business in Northeast Asia and Southeast Asia. However, back then, Shanghai was not qualified to take such a role.

Shanghai was the top metropolis of the Far East about a century ago. But the rise of Guangzhou and Shenzhen after the country’s reform and opening-up challenged Shanghai’s leading economic status on the mainland.

With plenty of room to develop, Pudong was chosen as the place to bring Shanghai back to its former glory.

“We developed Pudong to revitalize Shanghai, making the city to compare with London, New York, Paris, Tokyo, Hong Kong and Singapore and enabling the city to have equal dialogues with these cities,” Zhao said.

Thirty years later, Pudong's regional GDP has increased more than 210 times, from 6 billion yuan in 1990 to over 1.2 trillion yuan in 2019. It now contributes nearly one-third of Shanghai's GDP.

“Our economic scale today is twice or three times that of Shanghai 30 years ago. You can see these tall buildings, factories and highways sprang up through photo records,” Zhao said. “We are now very close to the target of making Shanghai on par with other global cities. In terms of finance, we are also among the top places in the world.” 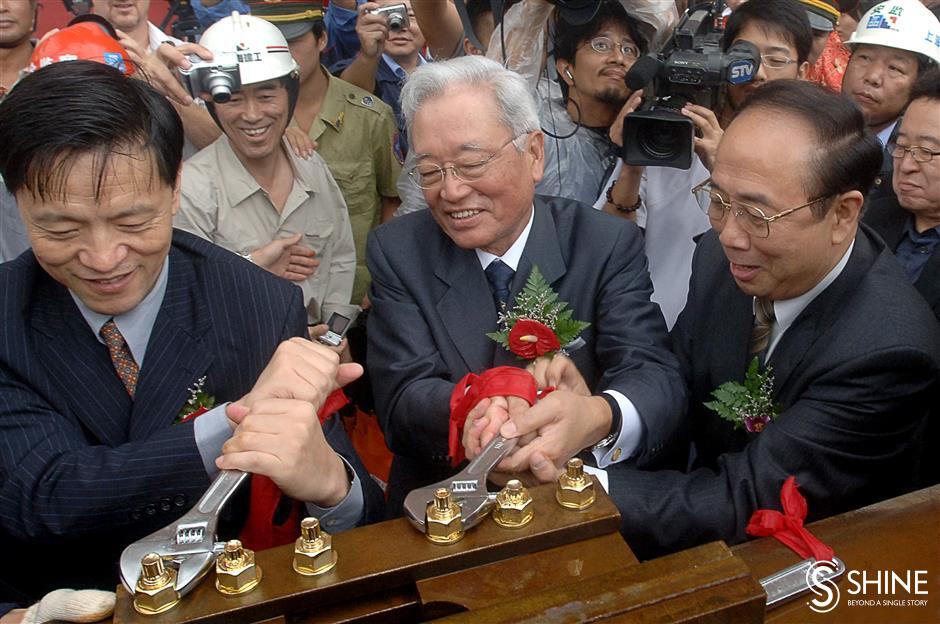 Zhao, looking in hindsight, said Pudong’s success is a story of both prudence and audacity.

“Pudong emphasizes innovation,” he said. “Its development is an urbanization process from a rural area to a city, a process from agriculture to modern industry, and a process to become international.”

As China’s first “new area,” Pudong should be something new and different from other newly developed areas in China. It’s not simply a special economic and technological development zone. Instead, it’s a new urban area of Shanghai. And it was designed to support Shanghai’s ambitious plan to become an international financial, economic and trade center.

“Our task is heavier. We call for a comprehensive development, not just in economic field, but the whole society with overall progress,” Zhao said. “So, we zoned Lujiazui to develop international trade, Jinqiao for modern industry, Waigaoqiao for logistics and Zhangjiang for a science hub.”

Zhao also pointed out the importance of improving the living environment.

“We must build qualified schools, hospitals and certain amount of green space and parks to improve everyone's overall living standards. Preferring a bed in Puxi to a house in Pudong has become history. It has been widely recognized that living conditions in many areas of Pudong are better than some in Puxi,” Zhao said.

He took his beloved Lujiazui Central Greenland for example.

Roughly 10 hectares, it used to be home to 3,500 families. After they got relocated, no new buildings were erected in such a sought-after place. It was transformed to an urban oasis.

“At that time, many people didn’t understand the reason. Why set aside a piece of land for green space? A newspaper from other city commented that Shanghai was brave to relocate 3,500 households just for building green space,” Zhao said.

He added: “The relocation cost us 700 million yuan. A well-known foreign investor had offered to buy the land, saying that he would repay Shanghai with billions of yuan. But we said that we need a place to breathe. The city needs lungs. So, it became the first green space in the urban area of Shanghai, followed by many others.”

Despite of great achievements, there is still a long way for Pudong’s development and opening-up, Zhao said.

Apart from becoming one of the key international economic, trade and financial centers, Shanghai should also takes the responsibility to lead the Yangtze River Delta region to become one of the most important city clusters in the world, he said.

The region, formed by Shanghai and the provinces of Zhejiang, Jiangsu and Anhui, has been well developed over the years. There are now five famous urban agglomerations in the world, and Shanghai and surrounding cities “will undoubtedly be the sixth” through united efforts, Zhao said.

“We are like different parts of a high-speed train, Shanghai being the locomotive, with other regions contributing power. With united strength, the train can run faster,” Zhao concluded.

Pudong's landmark moments over the years

1991: Nanpu Bridge, the first crossing over the Huangpu River, opens to traffic.

1992: The State Council approves the establishment of the Pudong New Area.

1995: The Oriental Pearl TV Tower is put into use.

1999: The Pudong International Airport is put into use.

2002: The world’s first maglev train for commercial use opens.

2010: World Expo Shanghai is held with nearly 75 percent of the exhibition areas in Pudong.