Locals and expats celebrate Christmas in friendship and hope

In the wake of the pandemic, expats are enjoying Christmas Eve this year with friendship and new hope.

Bradley Swayze, a Canadian who has been working in the city for four years, said spending it without his family was nothing new.

“Even back when I was at home, when friends and I could not make it with our families, we all brought gifts, food, and gathered together to celebrate,” he said. “We call it an ‘orphan Christmas.’”

Judith, from Germany, who works for a game company in Shanghai, said she was celebrating at home with friends.

“This was a particularly tough year for all of us, and I’m grateful for what I’ve had,” said Judith. “I really hope this pandemic can end soon next year.”

She was planning to go to the Holy Trinity Church with her boyfriend, but was disappointed to find it was not open to the public on Christmas Eve. 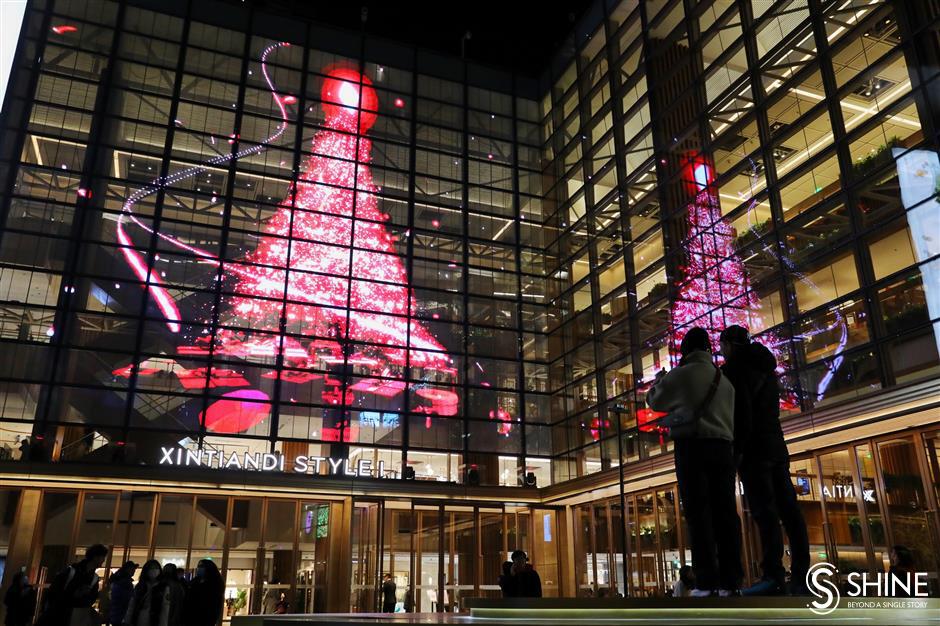 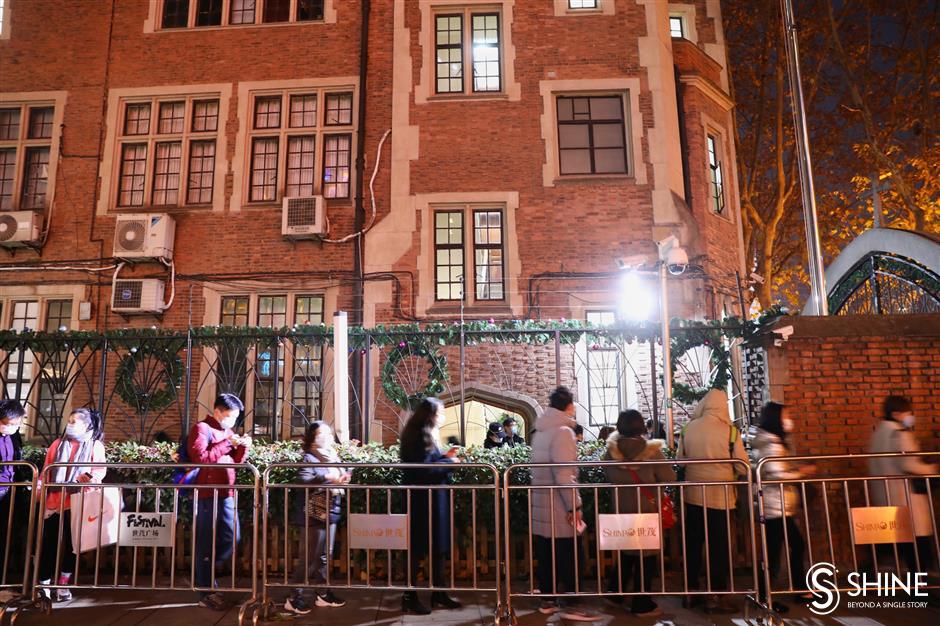 People line up in front of the Moore Memorial Church at People's Square.

Because of the pandemic, church services in the city need to be booked in advance due to the limit on numbers.

Passes for services on Christmas Eve were booked quickly at churches such as St Ignatius Cathedral, the largest Catholic church in Xujiahui.

Moore Memorial Church at People Square had a 600-seat limit and was booked in two hours.

The Christian Church International Chapel in Xuhui District is celebrating Christmas online due to ongoing renovations.

Luiza, from Brazil, lives alone in Shanghai and works at an engineering company, was on her way to meet friends.

“Christmas is usually about a reunion with families,” said Luiza. “But this year it becomes a special day for us (who cannot celebrate with families). Shanghai is our second family.”

“I really hope everything could go back to normal next year.” 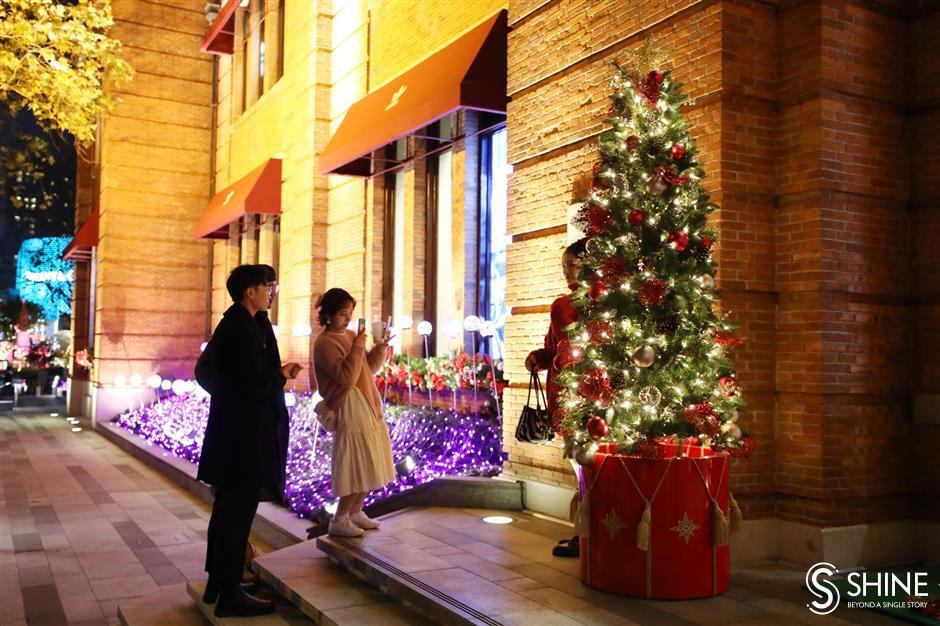 A passer-by takes a photograph with a Christmas tree on December 24. 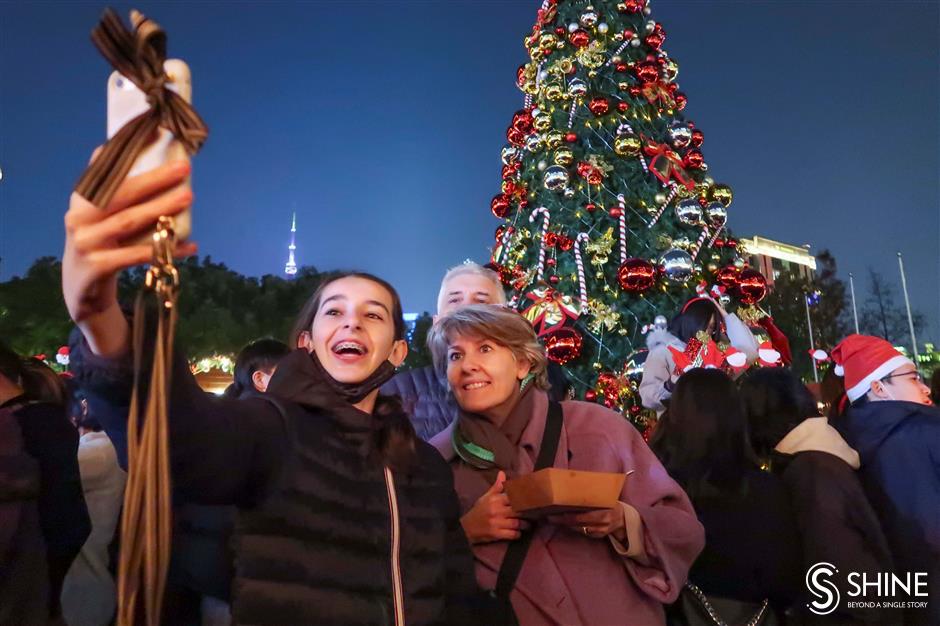 People take pictures in front of a Christmas tree in Waitanyuan on the North Bund.

For many international students, this is their first Christmas away from home.

Sophia, who began her freshman year at NYU Shanghai last month, said she had fun with her friends on Christmas Eve.

“I went to a buffet, holiday shopping and bowling with my friends. At night people rented an Airbnb to celebrate together,” said Sophia. “We had fun.”

Currently it's winter vacation for Sophia and her classmates, who have already made plans to travel to different parts of China such as Beijing and Shenzhen before the new semester starts in late January.

Romanian Ana-Maria Radu arrived in the city from Beijing on Christmas Eve. She has been working in China for three years as an architect.

She had just resigned from her job and hadn’t made any plans for the evening but was in a relaxed mood.

“We also celebrate the festival back in my home country, including decorations and family gatherings,” she said. “Today is like a new beginning, a fresh page for me.” 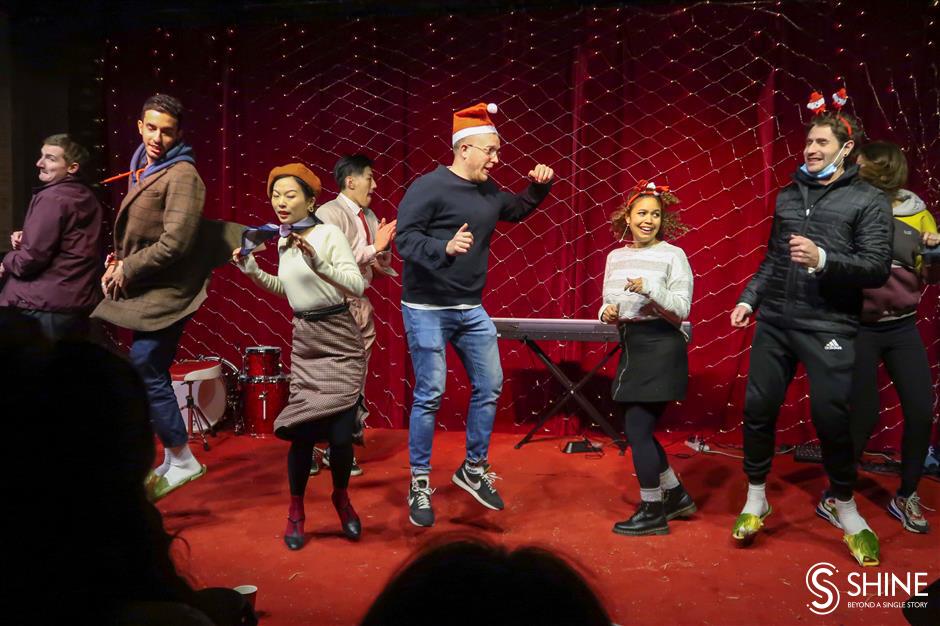 People have fun in Waitanyuan.