The younger generation of the Communist Party of China is carrying the aspirations and dedication of the Party forward 100 years after its founding. We meet a few of them in Minhang to discuss their contributions to a better life for all people. Shanghai Daily reporter Yang Wenjie reports. 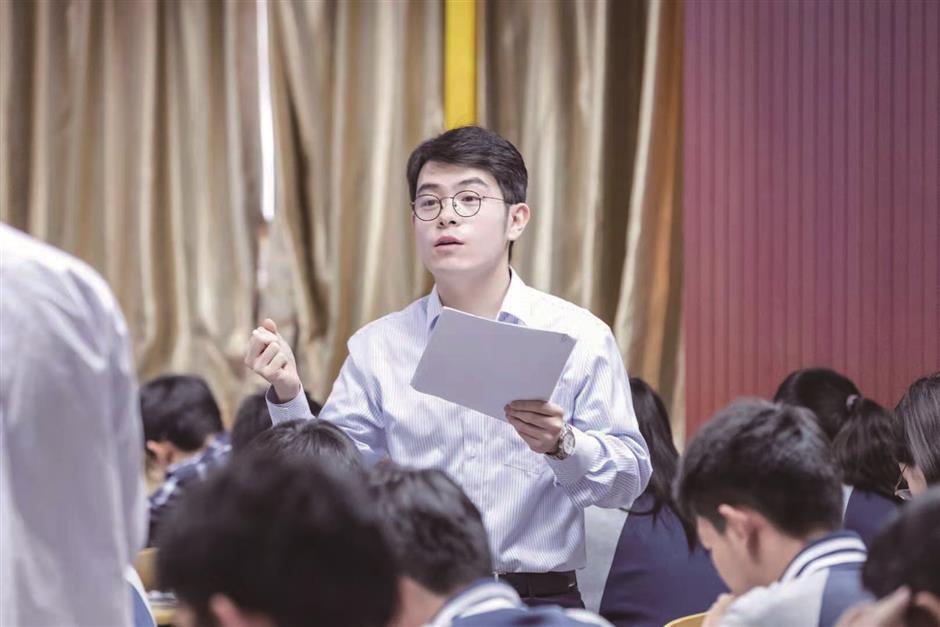 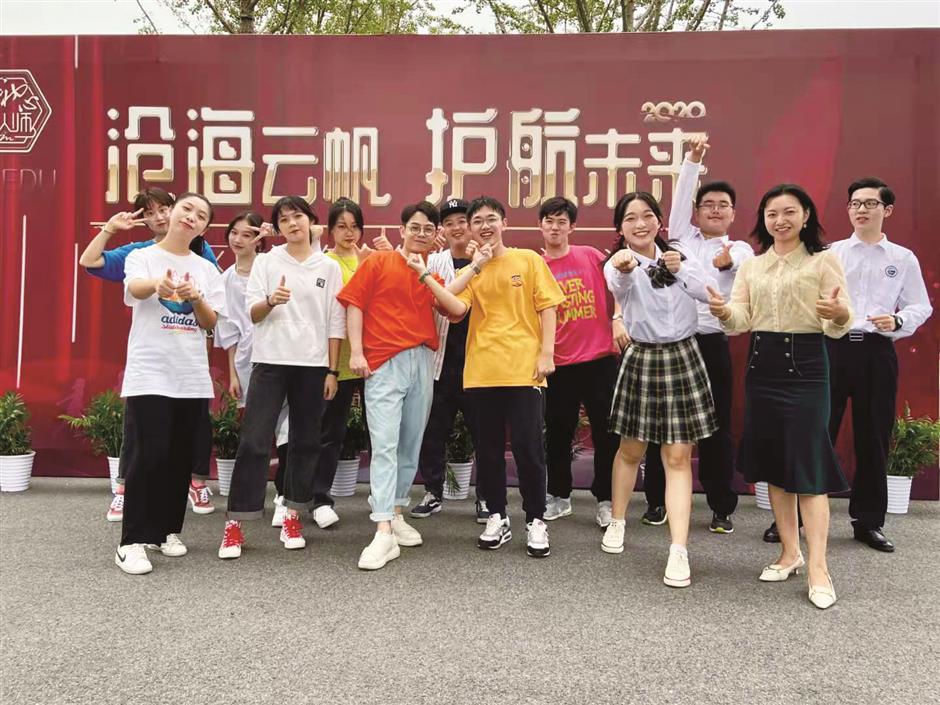 Xie Xiaodong (center in orange) poses for a picture with his students. The young teacher has won student admiration for his common touch in teaching.

Politics class. It's one class on the curriculum that students don't often choose as their favorite. Boring, they think. Xie Xiaodong is trying to change that image.

Xie majored in politics at Shanghai Normal University and started teaching at Minhang High School in 2013. In an effort to improve his qualifications, he also earned a master's degree and did considerable research in education journals to find the most effective teaching methods.

But the question still lingered. How to make politics interesting to those born after 2000?

He noticed how students loved to watch and discuss videos on the Bilibili.com online platform and decided he would try some livestreaming to answer questions about homework. The experiment began in 2016.

"I had over 200 viewers the first time," Xie recalled.

In a live chatroom attached to the livestreaming, students dropped the "Mr Xie" and began addressing him in more endearing terms.

"People always think of politics as something grand and solemn, but in fact it's just a common thing related to everybody's life," Xie said.

He said education is more than just passing exams. Only when students truly become interested in a subject can they be "educated," he said.

In the classroom, he uses some of the techniques that work well online. On one lesson on value judgements, for example, he showed his students the different opinions of residents near the construction sites of the Metro Line 5 extension and the Minpu Bridge.

Different people have different opinions, and they all can be reasonable, he told students.

Xie said he encouraged his students to think for themselves and draw their own conclusions. 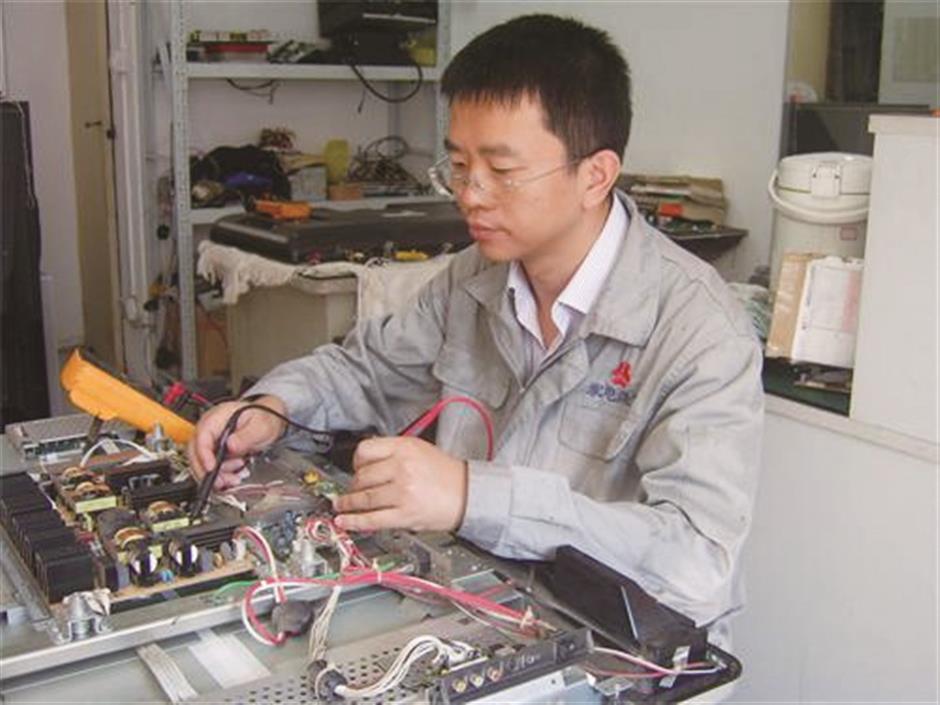 Liu at his workshop 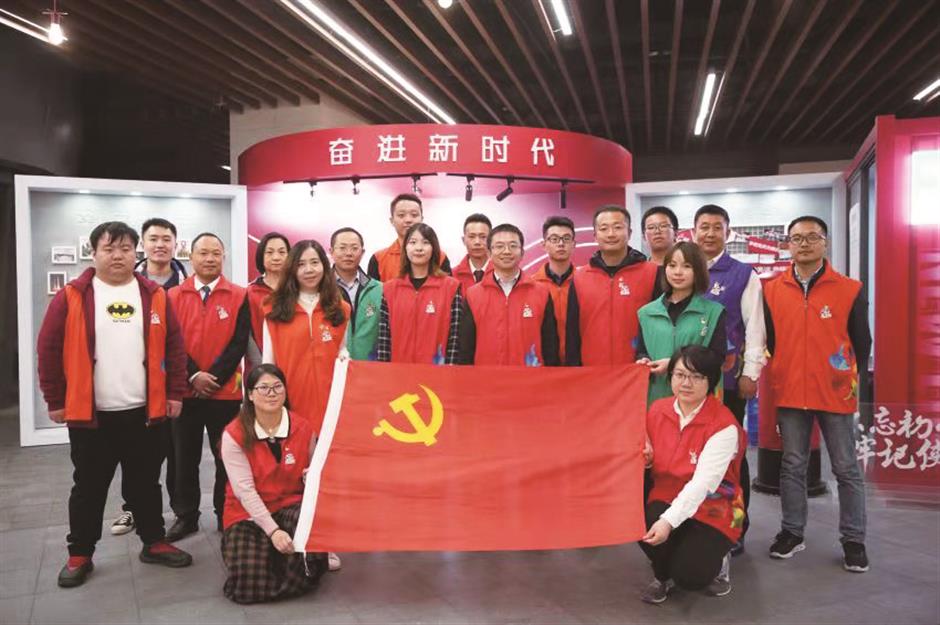 Liu Xianbao (center) and his employees

At the end of June, authorities in the town of Qibao approved the installation of an elevator in an old building that had only staircases. It's part of a citywide campaign to make old buildings more accessible for mostly older residents.

Liu Xianbao was pleased by the approval. He has been working in communities to help people apply for the program. It's just one facet of his service to people.

A migrant worker who came to Shanghai in the 1990s, Liu began as a worker installing air conditioners. He and his partner had a big workload of orders, and the stress caused Liu to suffer gastric hemorrhaging. Doctors advised him to slow down, so he cut installation work to mornings and studied repair of air conditioners at night.

Lu became a maintenance worker at Chunlan Air Conditioning, and then in 2002, he started his own home-appliance repair shop in a market in Qibao.

One day, an elderly man who had traveled more than an hour to the market asked Liu to fix an old-fashioned radio. Because of its age, the man told him, it was hard to find a repairman.

"I thought to myself that if I could offer my services directly in the communities, it would save people like the old man from having to travel long distances," Liu said.

So he contacted various residential committees for permission to set up temporary repair stalls for free. At Hanghua Village, where he held his first repair session, Liu worked way beyond the scheduled two hours. He didn't charge for the repairs and actually spent 1,000 yuan (US$154) on parts.

"When I was little, our family home was once damaged by flooding," he explained. "Neighbors helped us financially. I vowed one day that I, too, would become a benefactor to people in need."

He was true to his personal pledge. Since 2009, he has been cleaning air conditioners for free for the elderly. His kind deeds propelled him to Party membership.

In 2015, when Minhang District launched a campaign to build 100 community centers, Liu saw it as a chance to expand his services. So far, Liu and his 50 employees have repaired more than 20,000 home appliances for free for residents.

His company donates about 40 percent of annual profit to such voluntary work.

Over the years, Liu's selfless devotion to helping others has won him honors, including the national Labor Medal and a Shanghai Model Worker citation.

He still keeps active in communities, where he had been promoting garbage sorting and elevator installation. 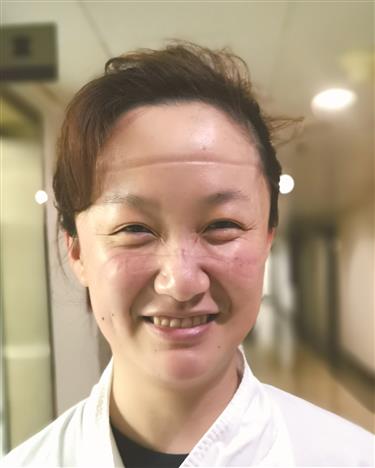 Liu Yun is all smiles, even after long hours wearing uncomfortable protective gear in a laboratory.

Liu Yun works in the microbiology laboratory at Minhang Disease Prevention and Control Center, where she and her colleagues braved the risks of coronavirus to process test samples.

Though aware of the psychological and work pressures within the lab, she answered the call for help when extra staffing was needed. Suited up in protective gear, she worked long shifts in the uncomfortable clothing that made verbal communications impossible.

Liu's husband is the Party secretary of Duhang in Pujiang Town. He was heavily involved in pandemic control work and contracted pneumonia because of the workload. Both partners supported one another during the outbreak.

Liu remembered the Spring Festival when she and her husband weren't able to be with their two daughters for the traditional holiday dinner. Their 13-year-old stepped into the breach, making the seasonal treat of sweet dumplings for her three-year-old sister. Liu had to exchange holiday greetings with them online.

"We were absent temporarily so that we could be together for the future," Liu said.

She became a Party member in February 2020, when the pandemic workload was the heaviest.

"It was a milestone in my life, and I take the responsibility it entails very seriously," she said. 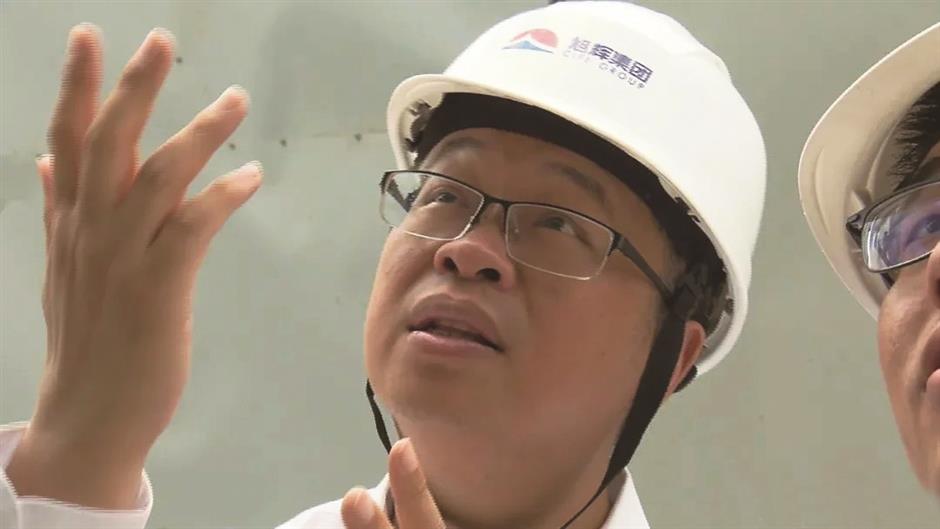 It's a pilot project to reduce carbon dioxide emissions by 1,200 tons each year and could impact other projects in the future. The walls of the structures, for example, have outstanding heat-preservation qualities.

"A module system using advanced material will save a lot of timber and reduce waste and pollution," Cui said.

The project was first approved in February. The team now is addressing design and construction challenges, he said.

Cui has also been engaged in other engineering works nationwide, including the 600-meter Canon Tower in Guangdong Province, the satellite terminal of Pudong International Airport and "cloverleaf-shaped" National Exhibition and Convention Center.

For the construction of the convention center, Cui helped deliver the project to the highest safety and quality standards.