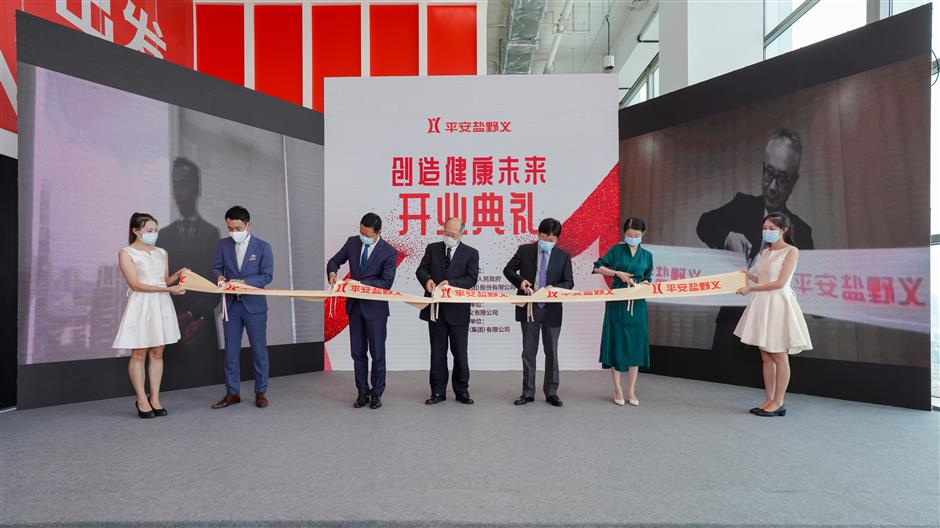 Chinese and Japanese officials conduct a remote video ribbon-cutting ceremony for the Sino-Japan joint venture, Ping An-Shionogi, in Xuhui District due to the COVID-19 pandemic.

Ping An-Shionogi, a Sino-Japan joint venture, officially opened in Xuhui on Thursday, with the aim of developing the life health sector in the downtown district.

The company was registered in Xuhui in November 2020, with a 2.94-billion yuan (US$4.5 billion) capital. China's Ping An Insurance Group controls 49 percent stake in the company, with Japan's Shionogi & Co Ltd holding the rest.

The JV will initially focus on new medicines and treatment for central nervous system diseases. It has acquired sole dealership in Asia (apart from Japan) of two new medicines developed by Shionogi and will carry out new drug development, manufacturing and sales in future.

The Xuhui government signed a memorandum with Ping An Group to jointly develop the life health sector, one of the key pillar industries of the district along with artificial intelligence, art and media as well as fintech.

The opening of Ping An-Shionogi is expected to further optimize medical and health services in Xuhui, improve the research and development of innovative medicines as well as help achieve the district's ambitions, according to Yan Bo, Xuhui's deputy director.

Xuhui, known as the origin of Shanghai's modern science and technology as well as Haipai, or Shanghai-style, culture, aims to become a "leading district of Asia's central medical city," Yan stated.

An over 100-billion yuan life health industry cluster with global influence in being nurtured in Xuhui.

Shanghai is constructing a world-class biomedicine industry cluster, while Xuhui serves as one of the key regions for the target.

By the end of 2025, Xuhui will become a highland gathering life health innovation, multinational headquarters and high-end R&D, according to the district government.

More than 3,000 life health companies, both from home and abroad, are based in Xuhui, mainly at key innovation parks such as Fenglin, Juke and Putian. The district also boasts 100-plus scientific institutes, more than 10 universities, 8 city-level hospitals and around 250 medical institutes.