The Tokyo Olympics has really ignited people's interest in sports. Jing'an has fostered several athletes for the Olympics, and it is making every effort to encourage young athletes. Also, across the district, there are many sports venues, including riverside pathways and neighborhood fitness clubs. Let's have a look. 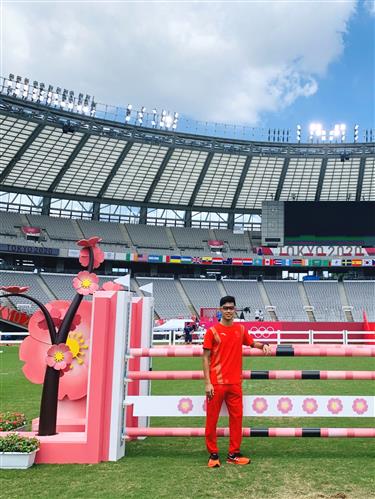 This year, Li Shuhuan represented China in the modern pentathlon.

Little known to the public, the modern pentathlon, however, was introduced to the Olympic program very early, in 1912, by Pierre de Coubertin, founder of the modern Olympic Games, as a test of all-round sporting prowess.

The sport was inspired by the traditional pentathlon held during the ancient Olympics. Now it comprises five different events: fencing, swimming, equestrian, shooting and running.

Li finished as No. 22 in the competition held on August 7, one position behind his teammate Luo Shuai.

In a previous interview, Li said it was his biggest wish to take part in the Olympics.

"I would have no regrets if I could experience the Olympics. I think it would be the best reward in my career," he said.

Li entered the Jing'an No. 2 Youngsters Amateur Sports School in 2005 as a swimmer. In 2009, coach Huang Yiming perceived his potential and asked him to take up the modern pentathlon. He has made great progress.

In 2013, he entered the Shanghai Modern Pentathlon Team. The same year, he was world champion in the youngsters' tournament. In 2016, he was selected for the national team. He ranked No. 4 in the Asian Games in 2018.

In Jing'an, elite athletes have been emerging.

At the Olympics, Wang Liqin won a gold in the 2000 doubles tournament, bronzes in the 2004 and 2008 singles, and captured the first ever Olympic team title when his sport came home in Beijing. 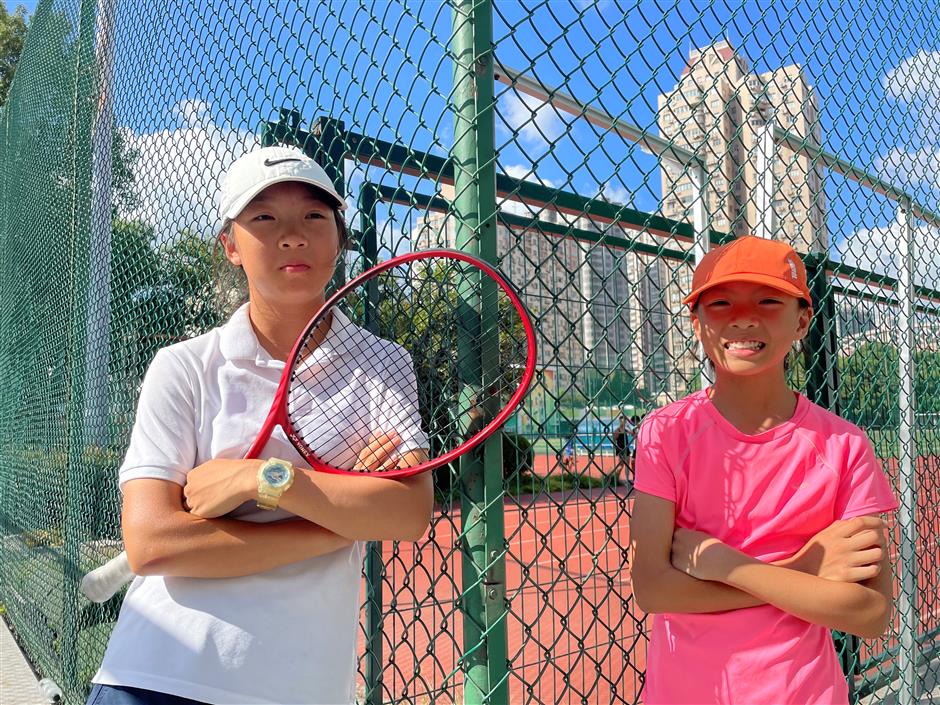 The key to this success? According to Jing'an sports authority, it has built a large talent pool.

Also, it is collaborating with institutes to foster young sters in activity such as golf, equestrian and ice sports.

Now, young athletes are being trained to get ready for the Shanghai 17th Sports Games set to open in 2022.

Nearly 2,000 athletes in more than 20 events such as volleyball, basketball, swimming and track and field are now trained in local school stadiums, sports venues and the water training center on Dianshan Lake. They receive two to three rounds of training every day.

Xu Yunzhang and her younger sister Xu Wenzhang are two of them.

Under scorching sunshine, the two sisters were sweating at the tennis court of Jing'an Workers' Stadium. Both have won championships in city tournaments.

"The elder sister has been training for four years, and the younger one trained for three years. Many girls can't endure the burning sunshine. But these two sisters insisted on exercising every day," said coach Bei Shen.

As for the demands of families to care for their children during the summer vacation, Jing'an has opened a series of summer classes. This year, a wide range of sports activities were added, such as badminton, martial arts, taekwondo and chess.

According to the local sports authority, it can not only improve the physical status of children, but also increase their interest in sports. 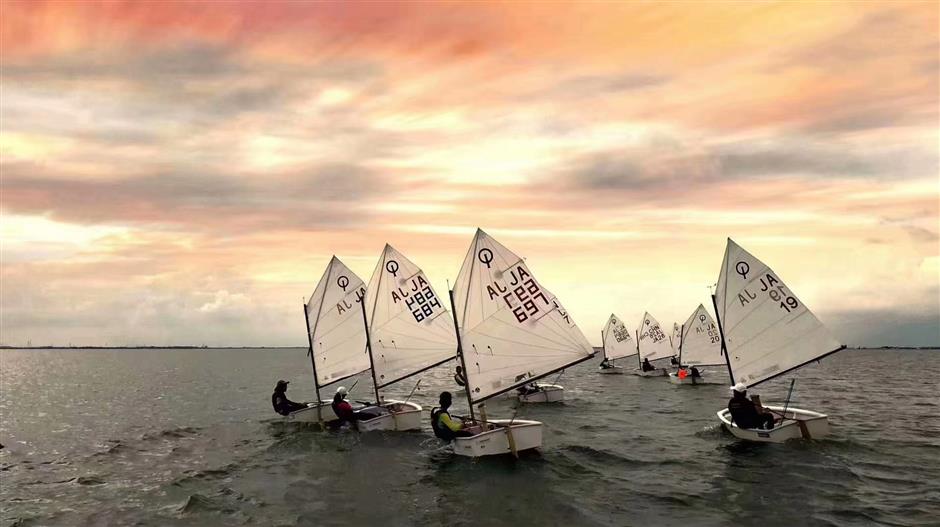 Young athletes in Jing'an train during the summer session. 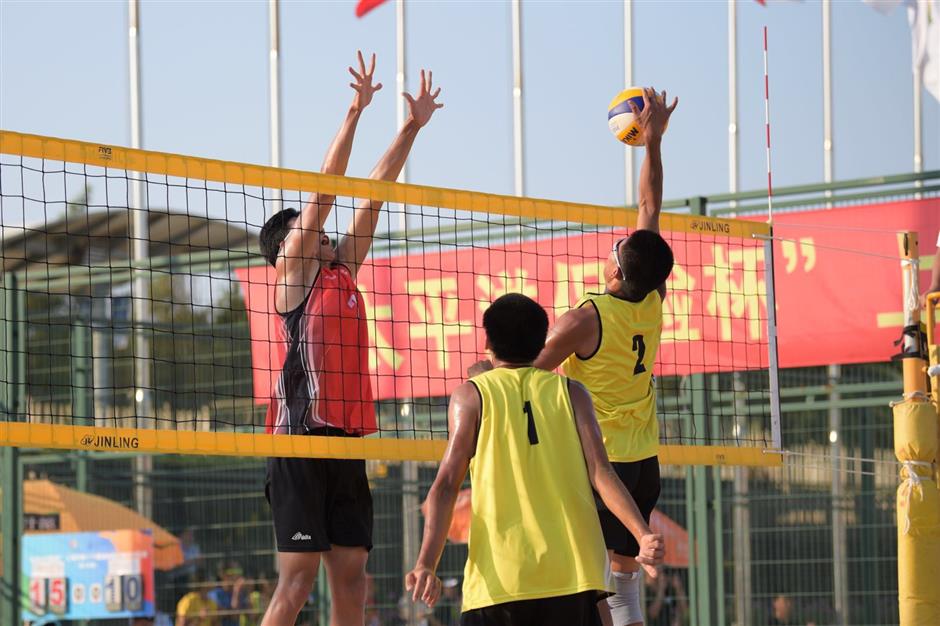 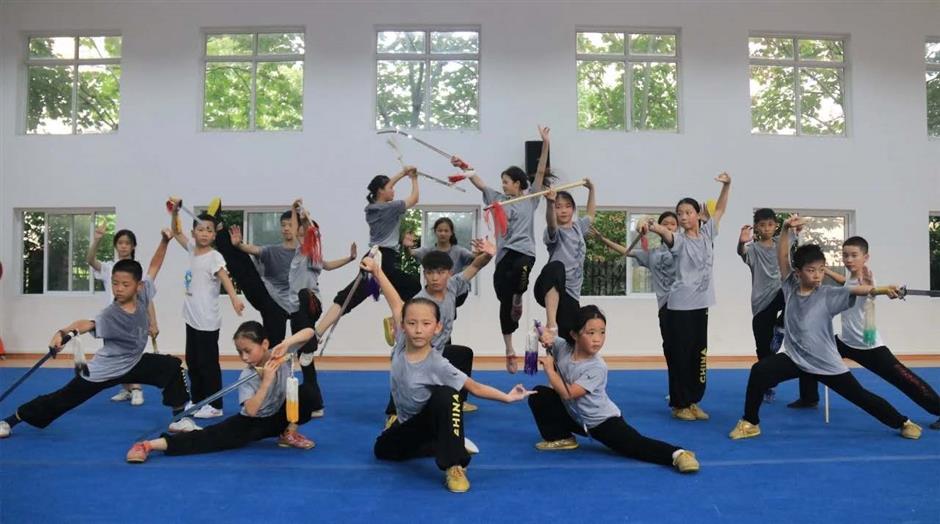 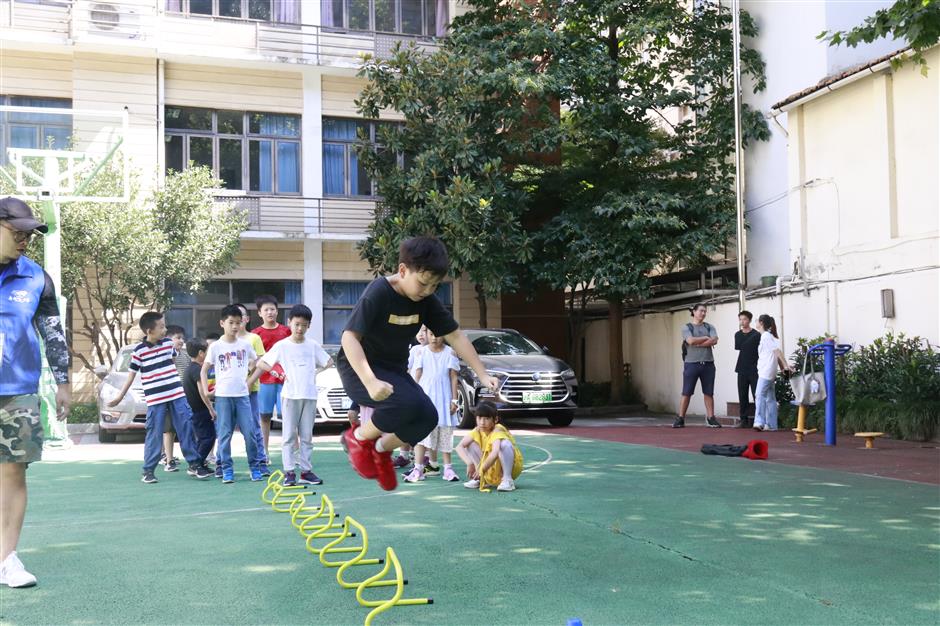 On August 8, a new "smart" community-based gym opened at Daning Road Subdistrict, becoming the third of its kind in Jing'an.

The subdistrict allocated about 400 square meters to build a gym at the doorstep. At Lane 1199 Wanrong Road, it is close to Metro stations and it is tucked away in rows of residential complexes and office buildings.

It is equipped with more than 30 pieces of fitness equipment such as treadmill, elliptical trainer and rowing machine. There are also locker rooms and rest rooms. People can scan QR codes to get in, and the expenses will be automatically deducted from their accounts after they leave. Every hour, it charges 2 yuan (31 US cents) between 7am and 10am, 5 yuan between 10am and 6pm, and 8 yuan from 6pm to 10pm. People can also make appointments with private trainers.

"I don't need to spend thousands of yuan to buy a membership card as with the fitness clubs, but just come to do exercise a few times. Also, there are no people promoting sales." A woman surnamed Qiu said: "It's cheap, but it is decorated like a high-end gym.

Jing'an was the first in the country from 2019 to build community-based gyms. To date, there are three. The other two are located on Luochuan Road E., and Xikang Road.

According to the Jing'an sports authority, "smart" sports venues is a trend, especially in the post-pandemic era. Remote online management can better serve people and ensure safety.

Now, in Jing'an, public sports venues and facilities are just a 15 minute-walk from home. As it's better to stay outdoors to do exercises, here we recommend some pathways and neighborhood fitness spots. 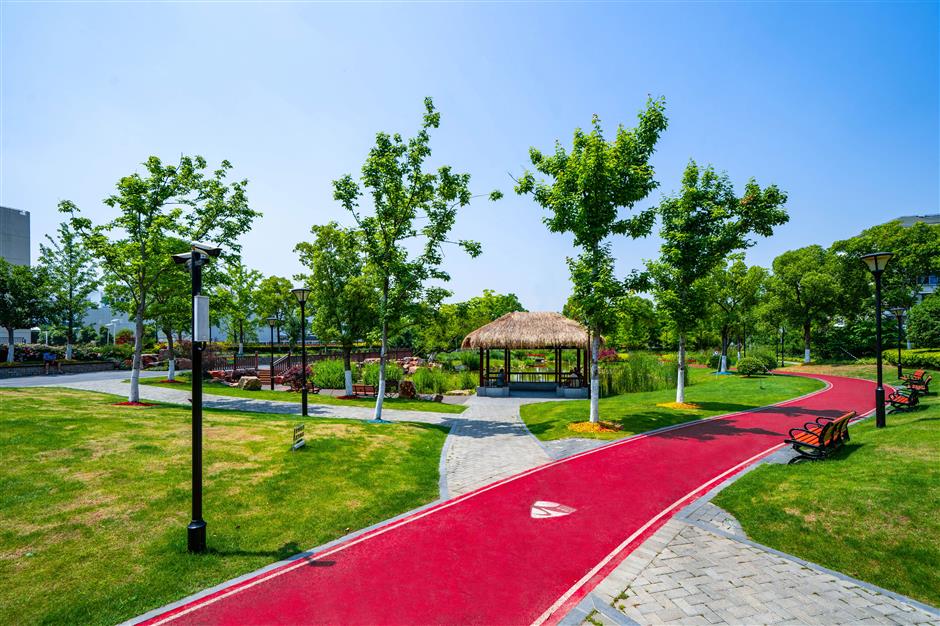 It's a comprehensive sports venue with a subtle blend of greenery and sports. It's also the city's first large public greenery featuring leisure and the concept of "sponge city." 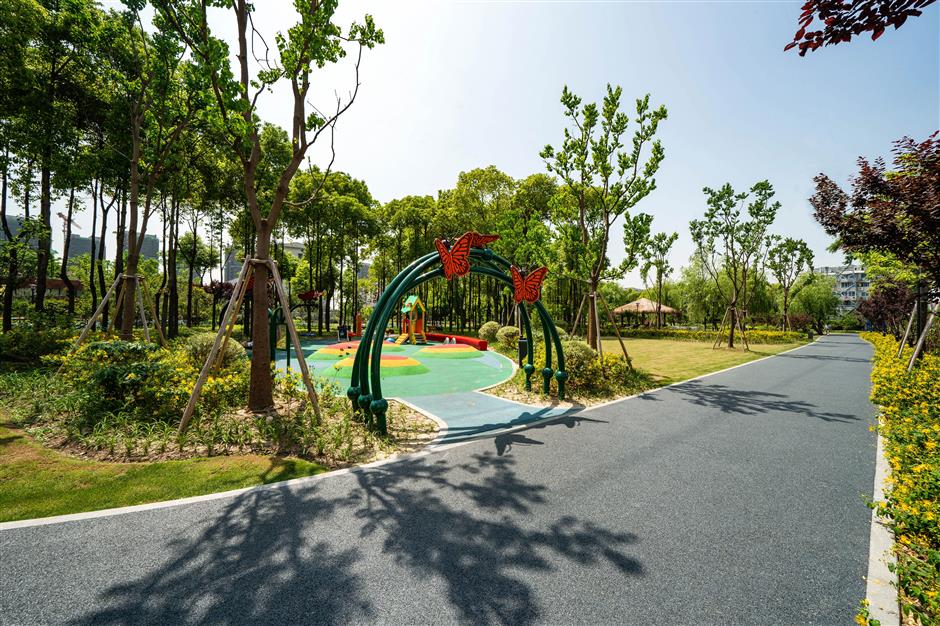 It is the only greenery built in the neighborhoods of Jing'an. Since its opening, it has become a popular place for nearby residents to go for a walk and do exercise. 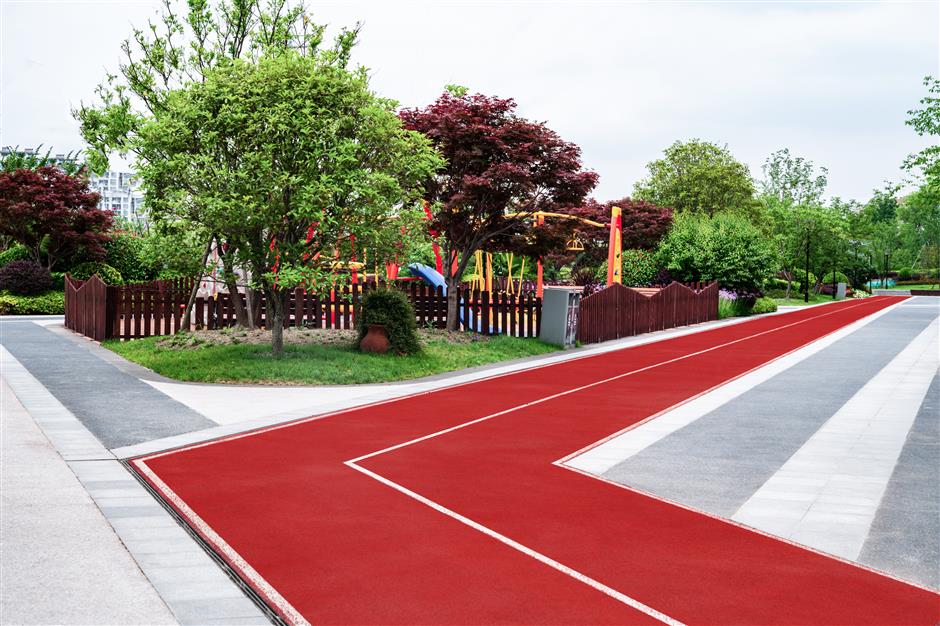 Address: 300 meters east to the intersection of Yuanping Rd and Jiaocheng Rd

The pathway in the park is designed for senior residents to have a walk and youngsters to do running exercise. Cherry trees, Osmanthus trees, camphor trees and tens of varieties of flowers are planted on both sides. 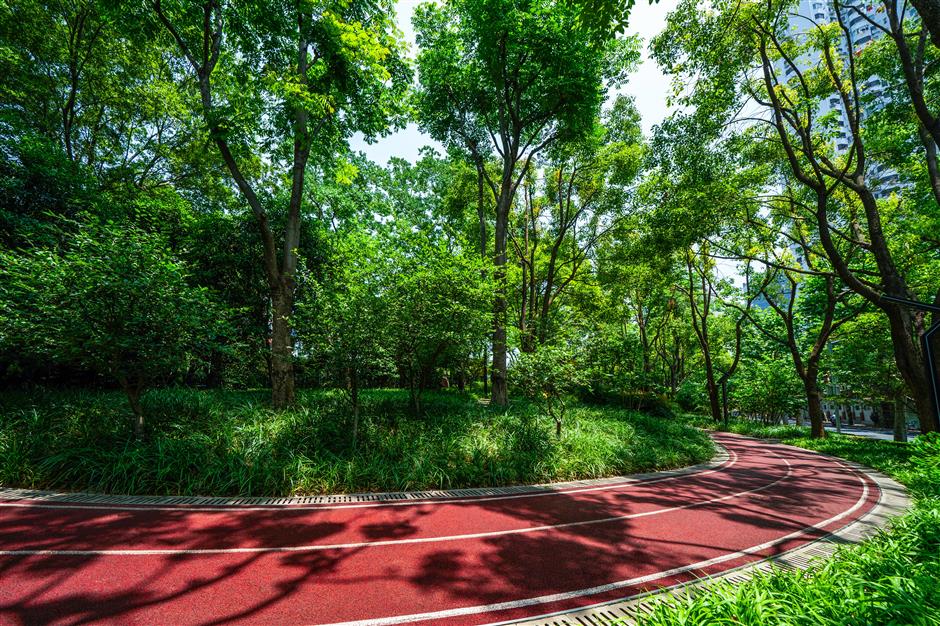 Riverside platforms stretch out from the pathway of Butterfly Park for people to enjoy the beautiful water views while doing exercise under lines of magnolia trees, palm trees and bamboo grove.

The pathway in the park was renovated early this year to display a traditional Chinese-garden style with added modern facilities. Tall trees were especially planted on the south side of the park to stifle noise from the nearby Middle Ring Road. 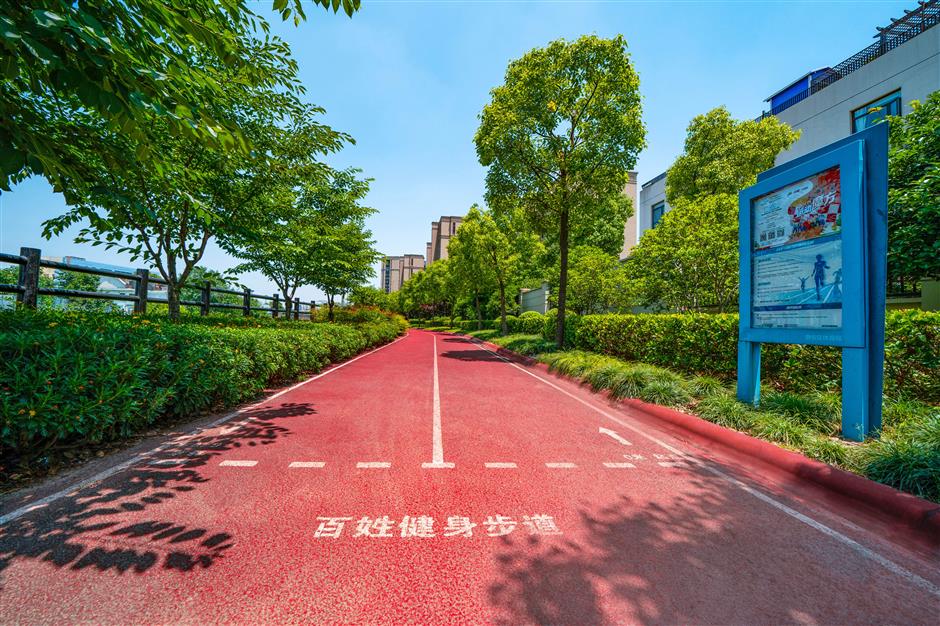 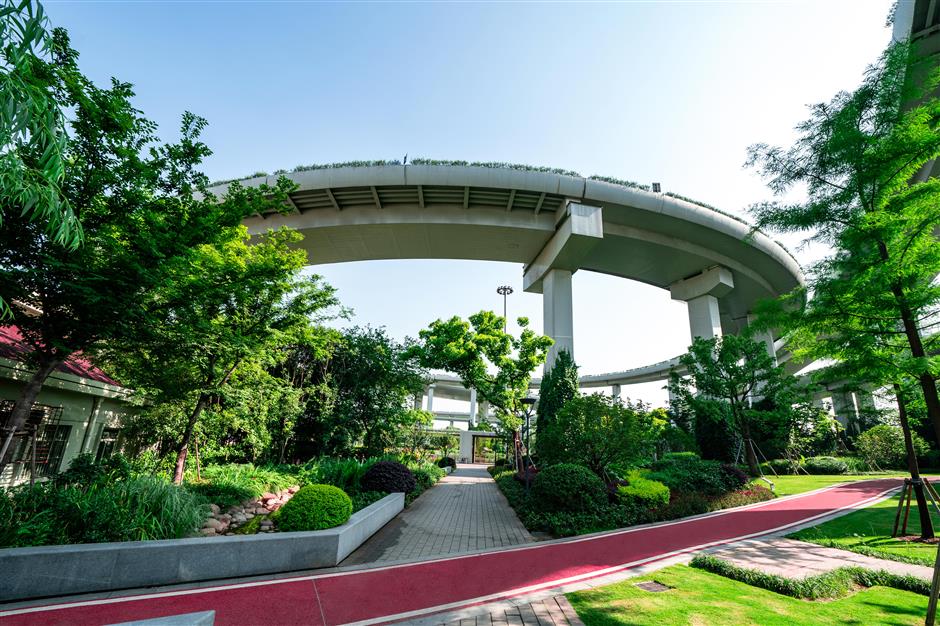 Address: at the intersection of Wenshui Rd and Gonghexin Rd

It's like a small park built below the busy Middle Ring elevated road. Cherry trees, plum trees and other flowers are planted on two sides of the pathway.

Inside Daning Park there is a fitness area equipped with a ball court for children and 54 fitness machines.