Moments of Jing'an District in August 2021 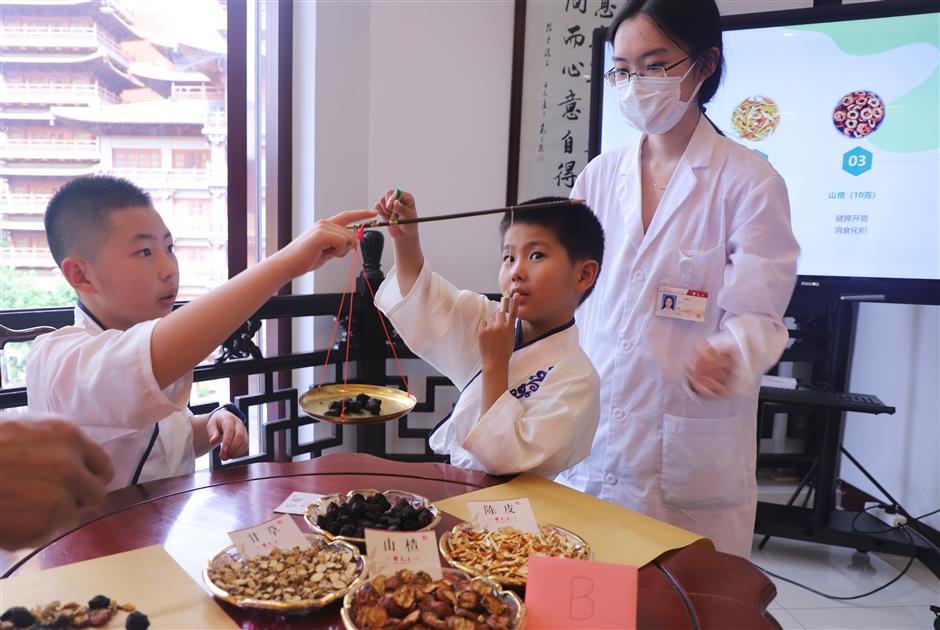 Diversified activities for kids on vacation

In Jing'an, summer vacation is not boring. A wide range of activities have enriched the lives of local children.

On the third floor, there is a clinic with décor in the style of a classical Chinese garden, giving children a deeper understanding of the culture of traditional Chinese medicine. There, they took part in interactive activities such as making wumei tang, a sweet and sour summer drink consisting of dried plum, hawthorn and other herbs. They also created "herbal paintings" by pasting herbs in the shape of a panda on fans. 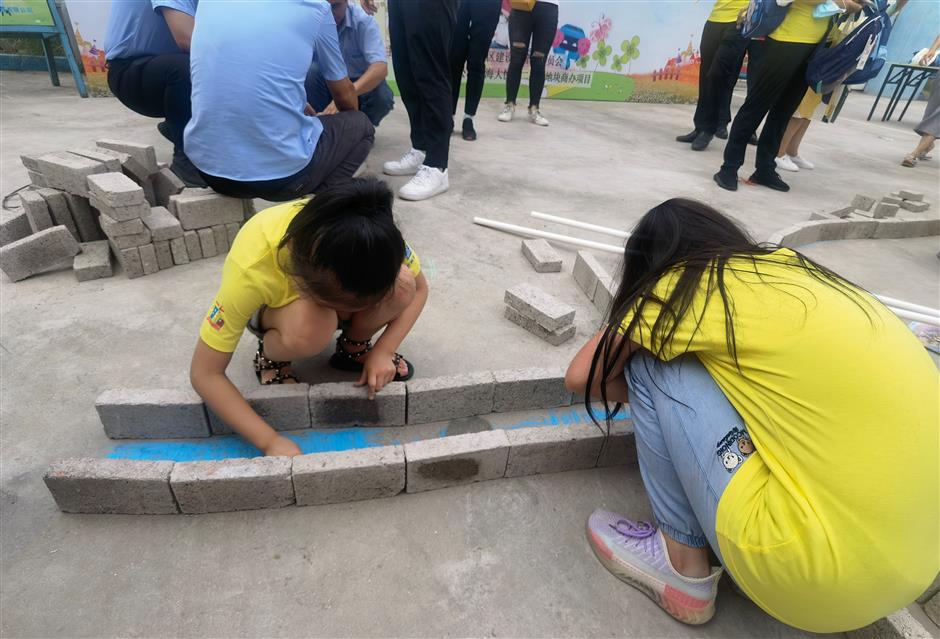 On the working site of the extension of Joy City in Jing'an, migrant workers united with their children to participate in different activities.

They drew and used bricks to put up models of the city's iconic buildings such as the Oriental Pearl TV Tower, Yangpu Bridge and China Art Museum.

"I have a dream. I want to grow up like dad to build skyscrapers and help to build a beautiful city," said 10- year-old Wang Yunfei.

Nine-year-old Zhao Yaxin experienced how hard her dad works. "I had a busy day and was very tired moving these bricks," she said. Her father Zhao Xiaohua said: "My daughter was cared for in her hometown. We only meet in summer vacation. I really appreciated this event to get us closer." 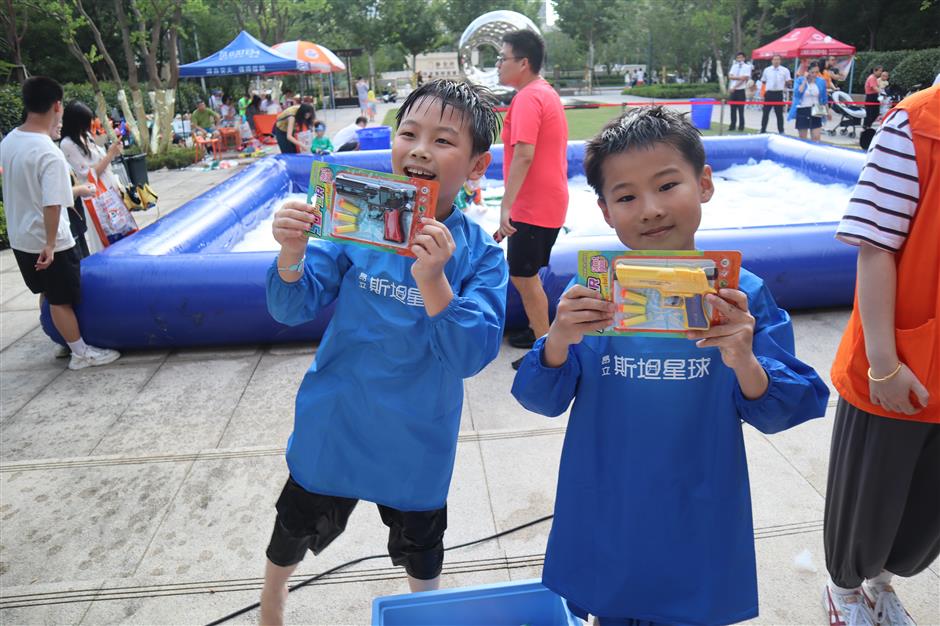 In Daning Road Subdistrict, children took part in interactive games to learn about garbage sorting. With their parents, they also drew on recycled bottles to learn how to make good use of waste materials. 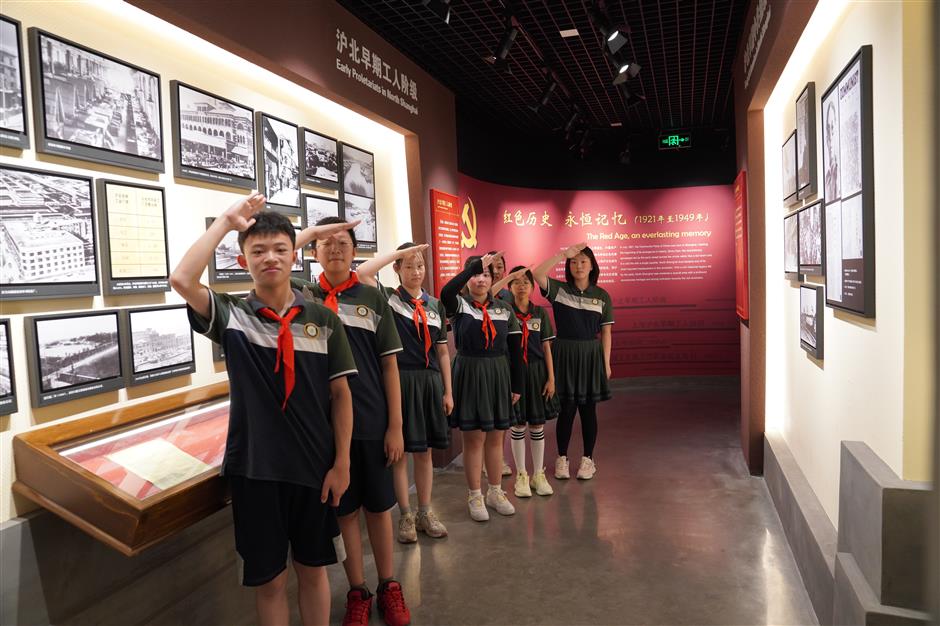 Shanghai Tianjiabing Secondary School organized a "red" tour for its students. They visited sites such as the memorial of the Party's first national congress to learn more about the revolutionary past. Student Li Zining drew a map of "red" sites in Jing'an.

Others also interviewed senior Party members who joined over 50 years ago and wrote down their stories. 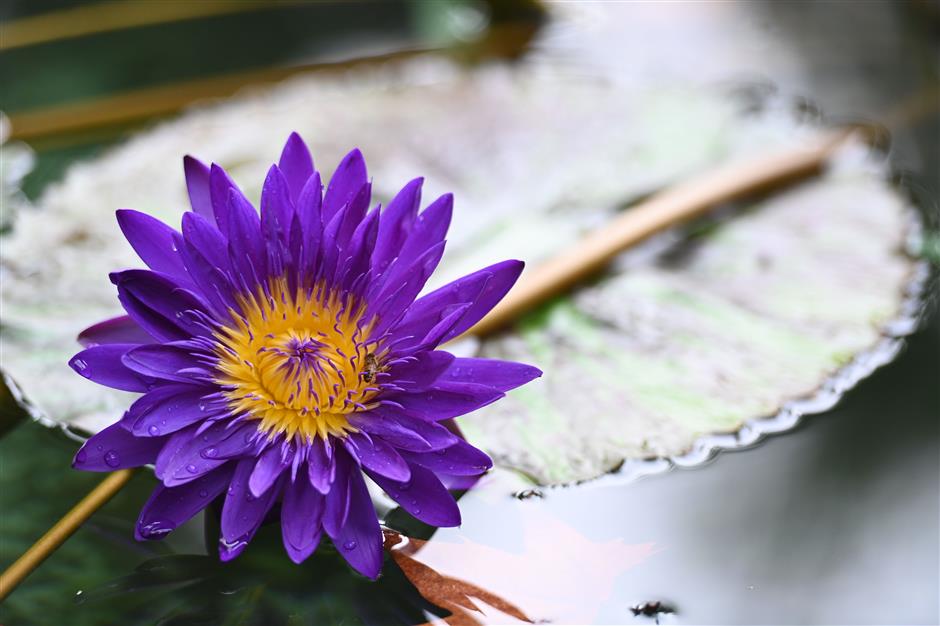 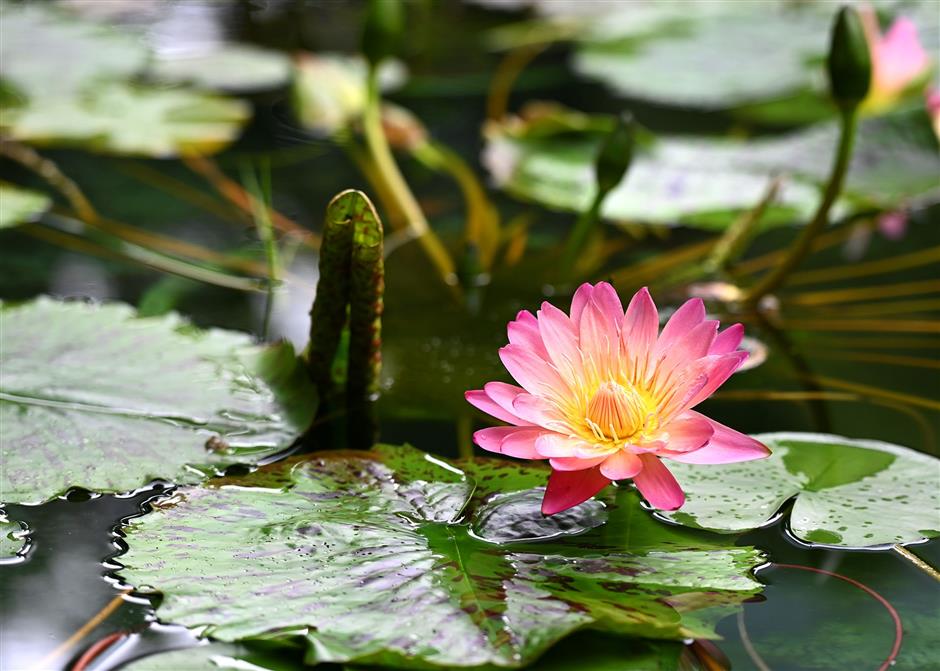 Blooming water lilies a feast for the eyes

To help visitors have a better understanding, a board explaining every variety has been erected beside the pond. Water lilies will usually bloom until October, and the best time to enjoy them is in the morning. But one variety called "red flash" only flowers at night. 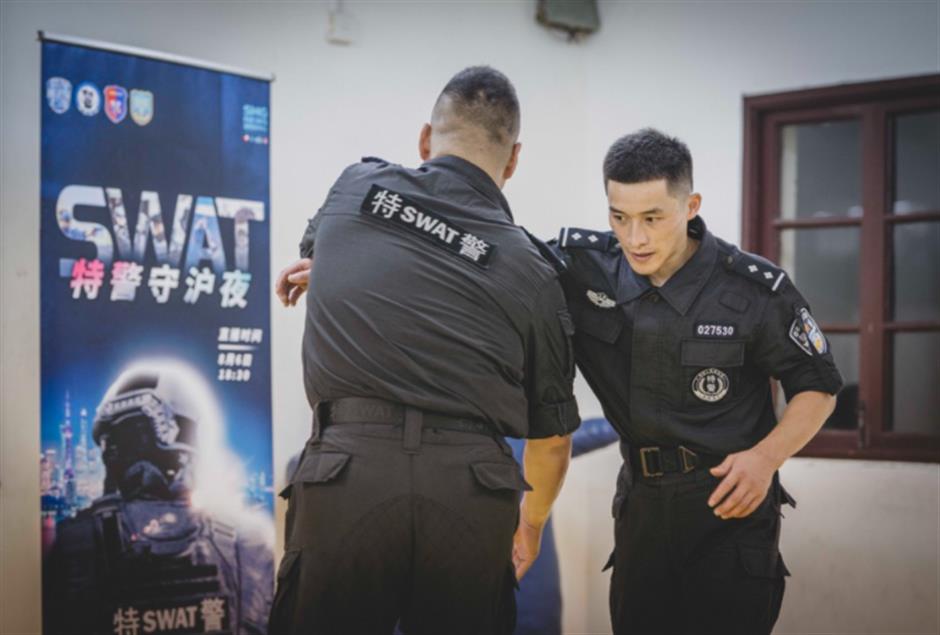 SWAT officers in Jing'an attended special training under scorching sunshine because summer is the ideal time to improve physical strength and support explosive effort. Also, they were trained to tackle different dangers through simulations. "We all exhausted ourselves training to challenge our limits," said officer Gong Minliujun. 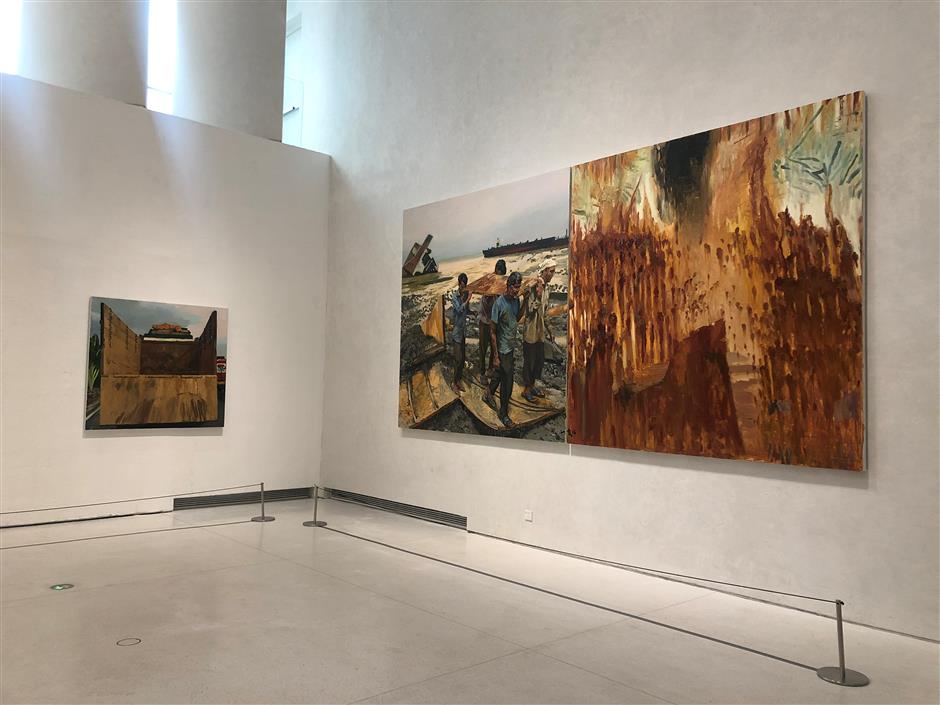 Artist Liu Xiaodong's solo exhibition "Liu Xiaodong: Your Friends" is currently running at UCCA Edge. It features more than 120 of his artworks, together with sketches, diaries and a new documentary film about Liu. He has painted family members, such as his mother, brother and wife, as well as some of his closest friends, like renowned writer Ah Cheng and famed directors Wang Xiaoshuai and Zhang Yuan. The exhibition will run through October 10 on 2/F, 88 Xizang Road N. Tickets cost 100 yuan. 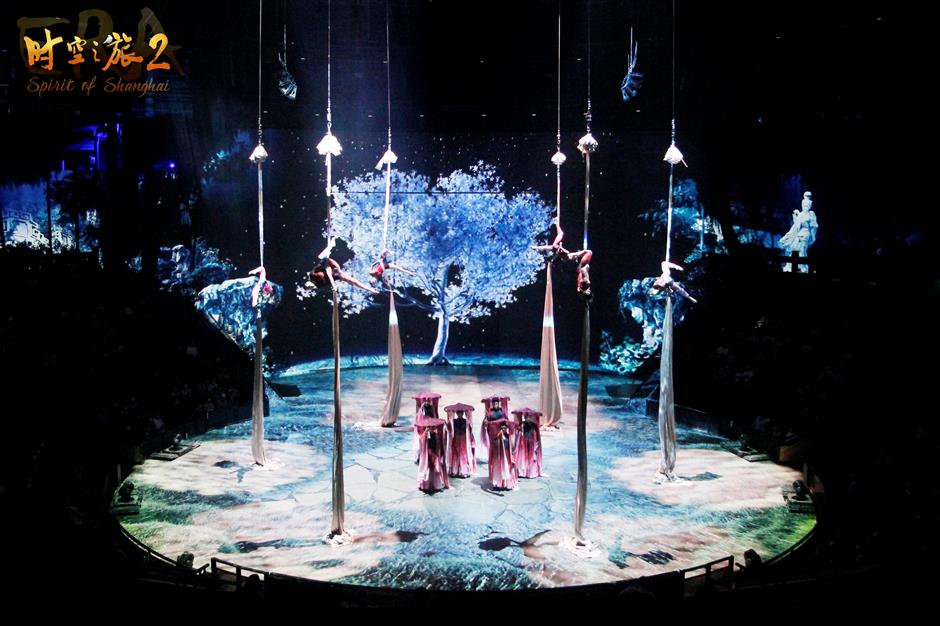 The second season of the multimedia spectacular "Era" is performing at Shanghai Circus World.

The new season, titled "Era – Spirit of Shanghai," features a completely new storyline, scenes and exhibitions of acrobatics, dance, theater and extreme sports. Set in Shanghai, the show follows a young couple's tour around the city. On their journey, the culture, charm and traditions of the city are displayed. The first season made its debut in 2005, and it has received 5.25 million views, becoming a cultural name card of Shanghai. Details and ticketing are available at www.era-shanghai.com.