Fifty foreign nationals were honored with the Magnolia Silver Award on Wednesday in acknowledgement of their outstanding contributions to Shanghai's development.

The award, named after the city flower, was initiated by the Shanghai government in 1989 to honor foreigners for their contributions to the city, with 1,316 expats having received the award so far.

"As international elites and industrial leaders, they left their homelands from all over the world for Shanghai and have worked actively here," said Zhang Xiaosong, director-general of the Shanghai Foreign Affairs Office, at the award presentation ceremony held at the Bellagio Shanghai Hotel.

"With unremitting efforts, they have made outstanding achievements and contributions in all walks of life, showing their love for the city with their actions and the magnolia spirit of blossoming against the chill. On behalf of the Shanghai Foreign Affairs Office, I would like to extend by sincere gratitude to all of you."

This year's recipients are from sectors, including economy and trade, finance, shipping, education, science and technology, health care, sports and culture.

Zhang said though international travel and people-to-people exchanges are still being affected by the COVID-19 pandemic, Shanghai has always been insisting on cooperation and communication on its path to opening up.

"It is the philosophy and vision of seeking common ground while reserving differences and being inclusive that has fostered faster and better development of our city."

He invited international friends to continue to work together with local people to create a better life.

"This year marks the 100th anniversary of the founding of the Communist Party of China and the first year of the 14th Five-Year Plan period, and the beginning of China's new journey to a modern socialist country," Zhang said.

"I sincerely hope all of you can join us to share the opportunities and write a new chapter in the new era, enjoying the fruits of Shanghai's development and creating a better life in the future." 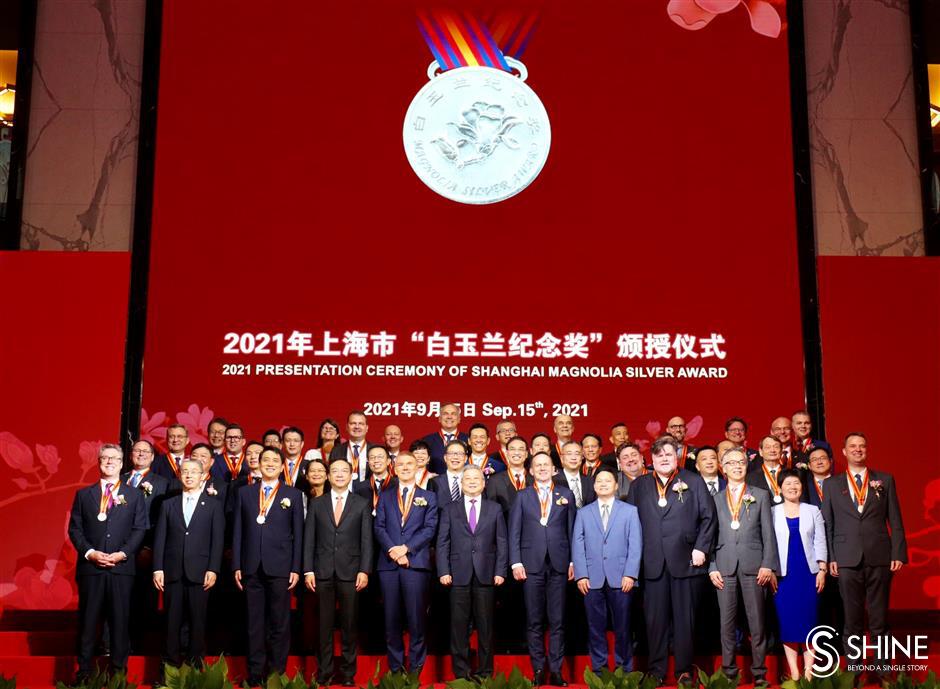 This year's Magnolia Silver Award winners pose for a group photo together with award presenters after a ceremony in Shanghai on Wednesday.

Kamran-Charles Vossoughi, president and chief executive officer of Michelin China, expressed his gratitude to the Shanghai government and people for the honor on behalf of the 50 recipients.

The Frenchman recalled the first day he arrived in Shanghai in 2019.

"When I received my work permit from the staff of the Exit-Entry Administration, the officer told me: 'Welcome to Shanghai! From now on, Shanghai is your home.' 'Home,' after two years of living and working in Shanghai, this word echoes in my ears again and again, and the meaning of this word has gone deeper as time has evolved," he said.

Vossoughi said the city has impressed him with its inclusiveness for foreigners working here, its excellent business environment, especially the support and care the government has given during the COVID-19 pandemic, and its vitality, talent, technology, innovation and cooperation, which give multinational corporations the confidence to establish their Chinese headquarters in Shanghai.

"If I may, on behalf of all the distinguished winners of the Magnolia Silver Award, we shall try our utmost to contribute to Shanghai's economic and social development," he said.

"In collective efforts, we shall build more connections by creating dialogues, build more ecosystems by collaboration and cooperation, and bring more technology and innovation to give people a high-quality life.

"Unity is strength, together we can move faster and farther. We firmly believe our 'home' of Shanghai will be flourishing and prosperous!" 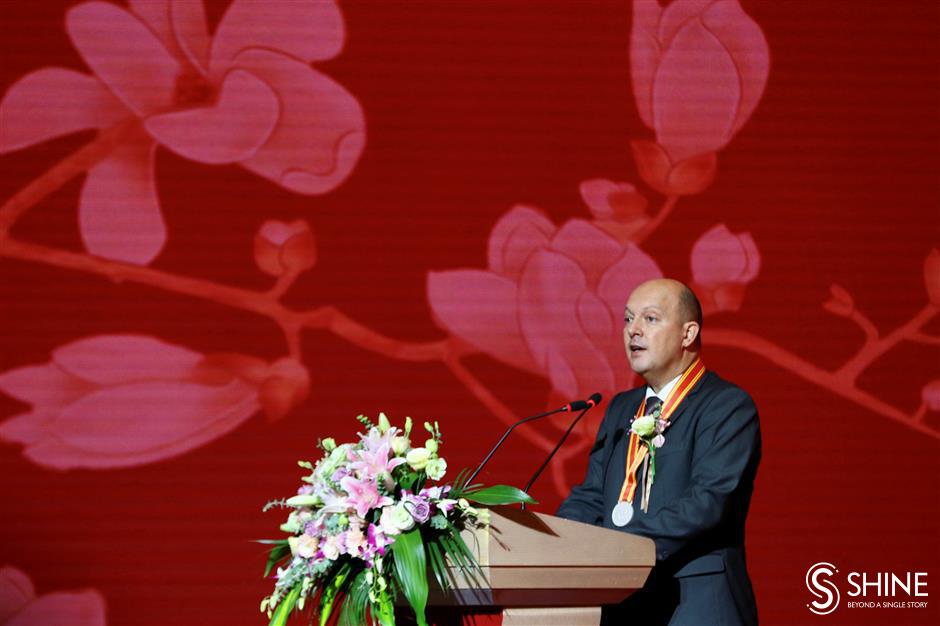 Kamran-Charles Vossoughi, president and CEO of Michelin China, delivers a speech on behalf of all the award recipients.

Lance Richard Lee Yuen, Asia-Pacific president of Bayer Consumer Health, a Canadian who has been in Shanghai since 2008, said the award represented the continuous care and support from the Shanghai government to foreign companies and foreigners.

"Shanghai's inclusive, creative and innovative, highly efficient and convenient and optimizing ecological environment and its talent policy are deeply attractive to foreign investors like Bayer, and offer us a broad arena," he said.

"I would like to promote Shanghai around the world and ask more people to follow with interest and settle down in Shanghai, repay this charming city with experience and skills, and contribute more to its development."

Bernardo Miguel Cabot Estarellas, China managing director and legal representative of Sol Melia Hotel Management (Shanghai) Co Ltd, has been living in Shanghai since 2010 and his three children grew up in the city.

"The speed, and the development of Shanghai is amazing, I think it's the financial capital of the world," he said. "We feel ourselves part of Shanghai and after this award, I feel even more committed, as Shanghai is the city of my family."

Cabot said the company started its hotels operation in China when he first arrived in Shanghai and it's now the group's Asia-Pacific headquarters.

"When we started in 2010, we had only one hotel. Today, we have seven hotels under operation in China – two in Shanghai, and we have five more under construction in different places," he said. "So that's the speed of Shanghai, that's the speed of China, and the energy of the city is boosting our company to have more and more hotels."

Cabot stated that the COVID-19 pandemic has been a challenge for everyone and his office in Shanghai has been sharing experiences in handling the situation with the company's other offices around the world.

"I'm still very optimistic about the hospitality industry in Shanghai," he exclaimed.

"Ten years ago, when I came to Shanghai, I was very scared and I didn't know what I would find in the city. But now Shanghai has become a reference (point) for our company. When we want to be inspired by new trends, even in restaurants, hotels or architectures, my colleagues from our headquarters in Spain come to Shanghai." 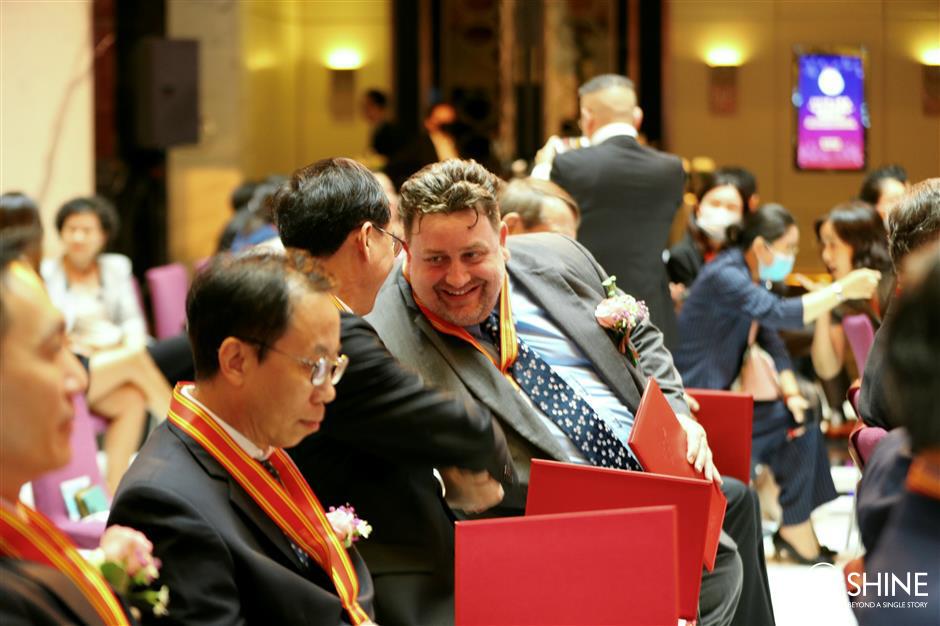 Award winners congratulate each other.

Huanli Lei, president of Covestro China, has been in Shanghai for 16 years. Though she was born in Shaanxi Province and is now a Canadian citizen, she calls herself a new Shanghainese.

"Every year you find something new in Shanghai, this is a dynamic city in many ways. It's getting better every day," she claimed.

Lei said the Shanghai government has been managing the city in a modern way and its strategies, including the "five centers" and "five new towns," show the city's vision to seek high-quality development. This provides her company more opportunities for its own development and also have the confidence to make contributions to the city. 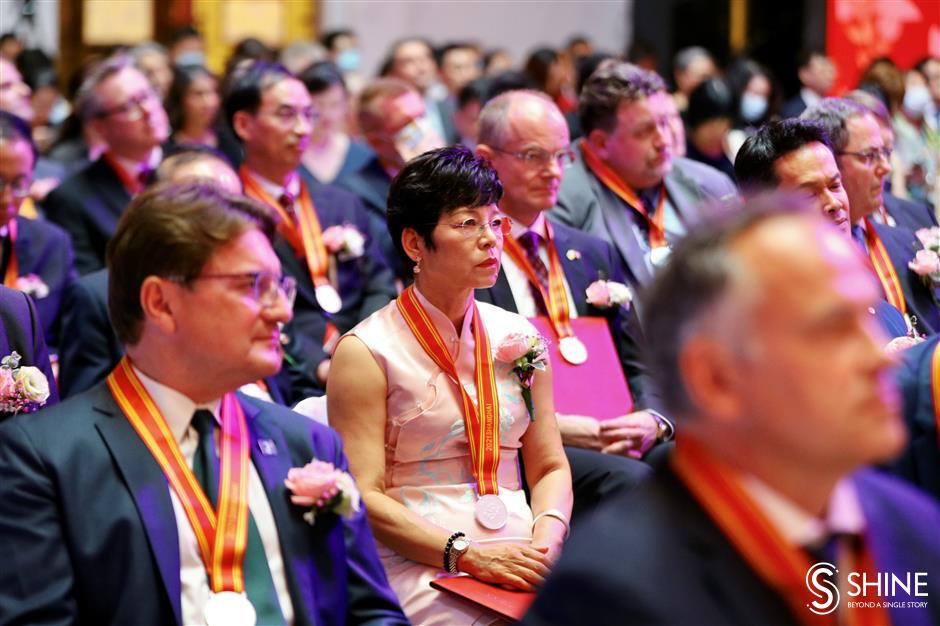 Award recipients are seen during the ceremony.

Marat Nusrat, vice president of Zhongtianxuxin Holding Group, first came to Shanghai in 1992 when he worked for the Australian general consulate.

"There were no subways or highways in the city, and Pudong was just starting to develop," he recalled. "But I loved the city as it was very friendly and harmonious. And when I left one and a half years later, from the bottom of my heart, I knew I would come back if I had the opportunity."

When he went through Shanghai to an education conference in Hangzhou, Zhejiang Province, in 2007, he saw miraculous changes.

"Pudong was up and in Puxi, all streets were getting greener. It had become a modern city," he said. "I knew then that I would be looking for any opportunity, it doesn't matter even working in a kindergarten or primary school, and I would be back in Shanghai."

Nusrat returned in 2009 and has since witnessed "great great changes" in the past 13 years.

"From a beautiful city, now I can call it a crystal city," he said. "It's so nice when you are standing in Puxi and looking at Pudong. It gives you the impression that it's a miracle city."

Nusrat said he loves the people and the friendly and harmonious society in Shanghai the most, which supports people to start a new life quickly in the city. After receiving help from many local people, he decided to give back to the city – he is now an active volunteer in Changning District where he lives.

During the pandemic, he worked with neighborhood staff and other volunteers to safeguard security in his community, taking part in services such as checking temperatures of people entering the residential complex, disinfecting public spaces and explaining pandemic-control measures to expats.

"The city has given me so many pleasures," he said. "Now it's so exciting to receive this award. A big thanks to the government of Shanghai and the great people of Shanghai. I love Shanghai." 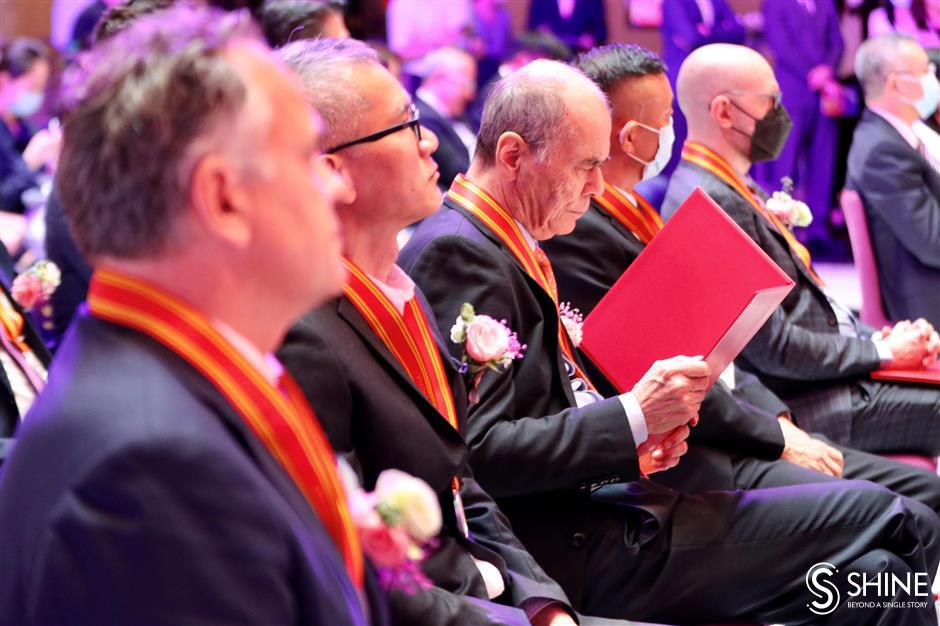 Another section of award winners at the ceremony.