Minhang District's ongoing campaign to improve the living environment of residents embraces a variety of projects from simply repainting to major renovation of homes. We look at some of the projects and the people benefiting from the work.

"I have been waiting to move back into my home, and I finally got the keys," said Wang Zhiyu, the 61-year-old resident of a renovated house at 405-407 Binchuan Road in the Jiangchuan Subdistrict.

"I will do some major interior redecorating before finally coming back."

Wang is among the 50 households moved from their apartment in July last year for major renovation. Many of the former homes didn't have private bathrooms or kitchens, with residents having to share facilities with other families.

"I am getting my home back," said a resident surnamed Pan, who is in her 70s. "It will have seven more square meters of space and a private bathroom."

Pan has lived in Jiangchuan for over three decades. It's a great neighborhood, she said, with many local conveniences. But having to share a bathroom with others was hard.

"There were quarrels sometimes when everyone wanted to use the bathroom at the same time in the morning and at night," Pan said. 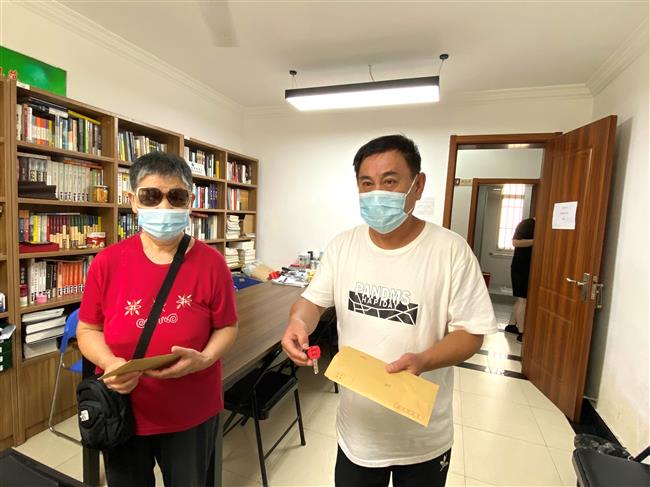 Happiness is receiving the keys to renovated housing.

Many of the homes in the area are the legacy of workers' apartments built in the 1950s for the employees of local heavy machine manufacturing plants. Mostly built of masonry and timber, they grew dilapidated with time and fell short of modern standards.

More than 60 percent of such housing in Minhang is located in Jiangchuan. Renovation projects began in 2005.

In some cases, old structures beyond repair were razed to build new residential housing. In other cases, major renovations were undertaken. Work on about 77 percent of residential buildings covered under the plan has been completed.

Installation of elevators in rehabilitated older buildings will proceed, freeing older residents of the hardship of navigating staircases.

Similar redevelopment is underway in Wujing, Qibao, Xinzhuang, Xinhong and other regions of the district.

About 2,000 households at 5530 Longwu Road are now in process of signing up for renovation work. The first building there gathered signatures from all residents, facilitating their temporary relocation. If all goes well, the residents can return to their houses as early as October 2022.

Zhang Houyun is a retiree from the Shanghai Carbon Plant, a manufacturing site prominent in the 1950s. She has been living in one of the old workers' dorms, designed by Soviet experts. residents had to share kitchens and bathrooms.

"The living environment was far from good," Zhang said. "There are many older people living here, many on low incomes. The neighborhood committee is always dealing with conflicts."

On weekends, the kitchen was always occupied all day long. On weekday mornings, younger residents chafed at the time the elderly spent on morning ablutions. Sharing utility bills caused friction when families had visitors staying for long periods of time.

"My bedroom area will turn from a square to a rectangle, and I will have my own kitchen and bathroom," Zhang said, relishing the vision of her revamped home.

Renovation blueprints were flexible to cater to the needs of different households. On average, each home gains 7.5 square meters of space after modernization.

"For each family we visit, we bring along a designer to listen to the residents' needs," said Sun Guoquan, a governmental worker on the project.

Although the improvements are generally lauded by most residents, there are still hold-outs.

A resident surnamed Chen, who lives on the third floor, bought the other two apartments on the same floor, thus owning an entire floor. He then redecorated the units and has a nice home with a kitchen and bathroom. He wasn't eager to sign up for the renovation project, but his signature was needed to proceed with work on the building.

In the end, he was convinced of the common good.

"We have all been old neighbors for so many years, and I can see where everyone will live better with the improvements," Chen said.

In addition to residences, the district's rehabilitation blueprint involved the upgrading of 14 old streets in Qibao, Pujiang, Zhuanqiao and Huacao.

The primary aim of the projects was to eliminate illegal structures, safety risks and blocked drainage systems, and to increase public restrooms and provide more fire stations to handle older buildings.

The results of the work withstood the test of typhoon In-Fa in July, which dumped a decade's record of rain in Shanghai. No instances of waterlogging or leaking roofs were reported.

Along Tangkou Old Street, a piece of vacant land by the river was transformed into a needed parking lot, and a pocket park was created on Zhonghe Old Street.

Qibao Old Street, a popular tourist venue, underwent landscaping with plants to complement the black brick and white walls of buildings in the area, preserving the look of a southern Chinese water town.