Expats from all over the world living in Shanghai gathered at downtown Kunlun JingAn Hotel to celebrate Mid-Autumn Festival on Tuesday. They savored traditional festival tastes and enjoyed cultural performances. 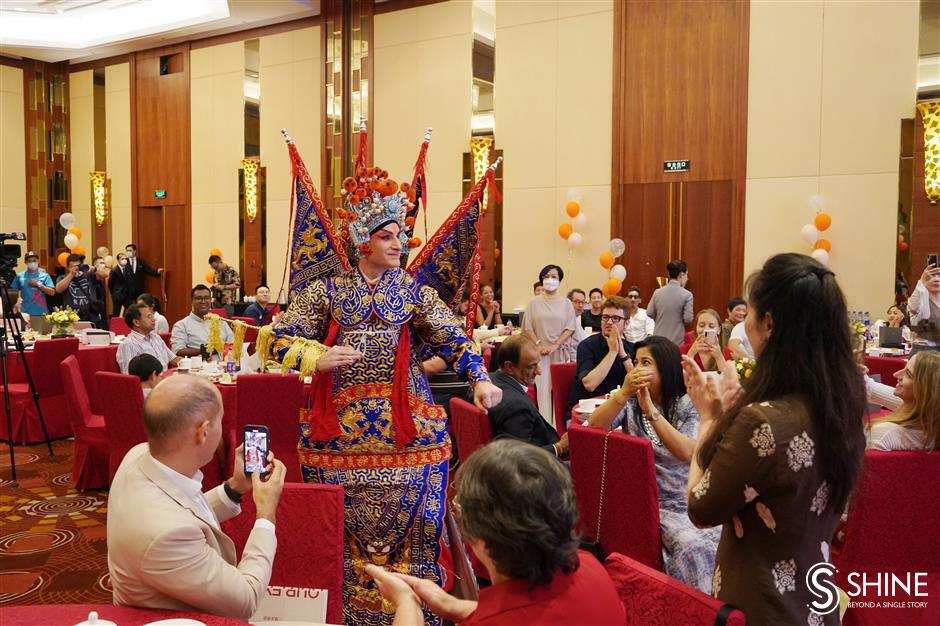 Some of the expats attending the tea party with their families and friends were members of the "Shanghai Through Our Eye Club."

Traditional festival food was served during the event such as different types of mooncakes and steamed taros and edamame. 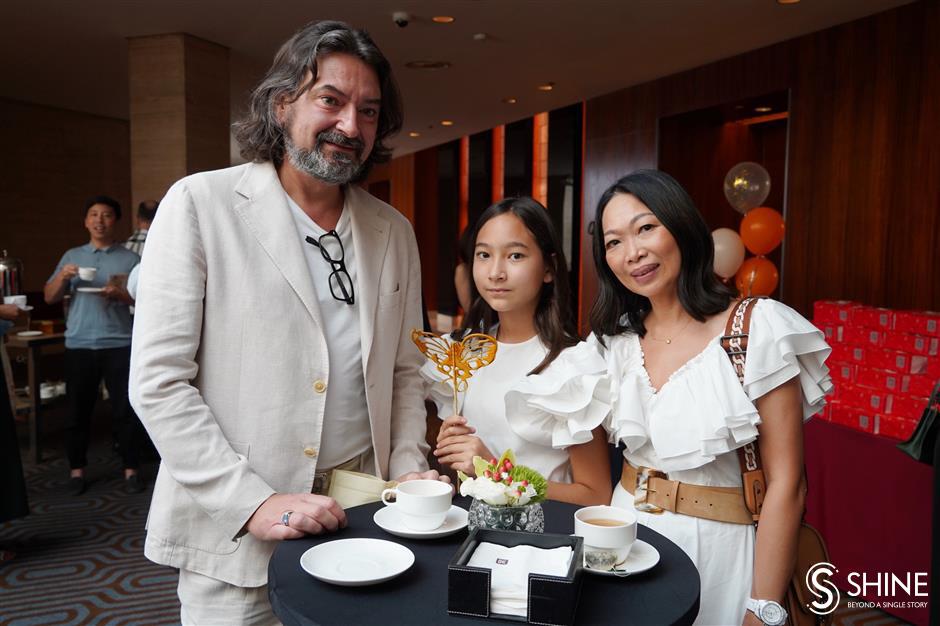 Yann Bozec, president of Tapestry Asia Pacific and president & CEO of Coach China, attends the party with his wife and daughter.

Frenchman Yann Bozec, president of Tapestry Asia Pacific and president & CEO of Coach China, loved the opportunity to enjoy the event full of Chinese culture with his Chinese wife and 11-year-old daughter.

"We have lived in Shanghai for more than 10 years. And since I am Chinese, we always celebrate Mid-Autumn Festival," his wife added.

Cameron Hume, an Australian, also attended the party with his Chinese wife and two daughters. He is the chief executive officer of a Shanghai-based foreign currency exchange company. Their daughter was dressed in hanfu, a traditional Chinese attire.

"With a double cultural background, our two daughters are keen on Chinese culture, and it is really nice to have this opportunity to let them feel more of it," said Hume's wife, who fell in love with him in Shenzhen, Guangdong Province, and moved to Shanghai for him. 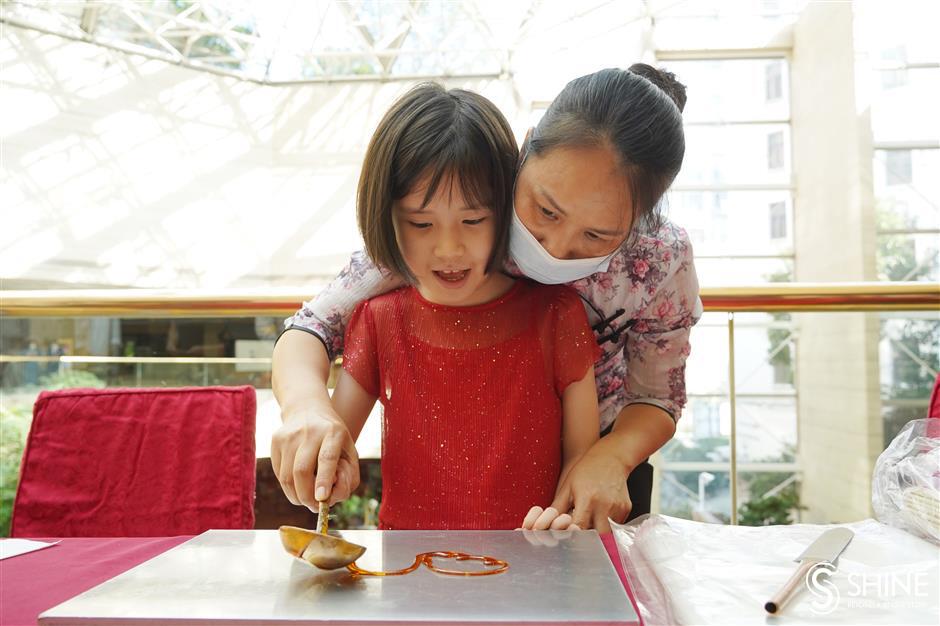 A girl learns how to make sugar painting. 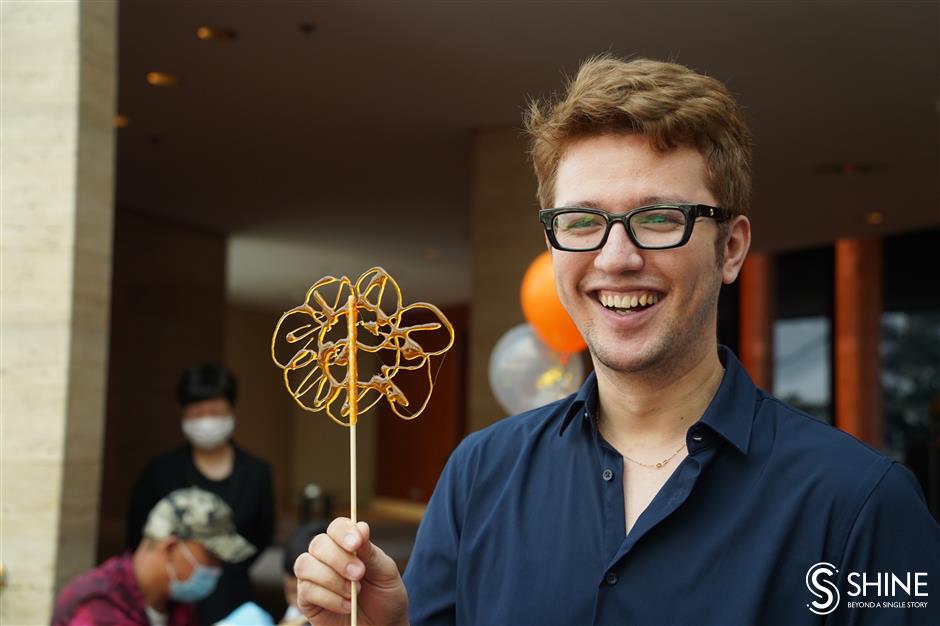 "My favorite part about the festival is eating mooncakes," said Zarkamol Munisov from Uzbekistan, a PhD student of Shanghai University's Global Studies. "It's amazing, the last time I had one with xiandanhuang (salted egg yolk) filling. But this one is perfect."

Munisov is a big fan of Chinese culture who thinks culture can help him understand more about Chinese people.

The celebratory activity was also an opportunity for foreigners living alone in Shanghai to communicate with other expats and local residents.

"I hope such events are held every year because I like them so much," said Armenian violinist Astrid Poghosyan, who also works as a part of the management team of the Shanghai Symphony Orchestra, in fluent Chinese.

"I really enjoyed the party because it was really a good chance for us to enjoy food and communicate, especially for expats like me who are far from home, because the festival is about reunion with families."

She presented a violin performance during the event, sending her best wishes to guests.

Poghosyan has been in Shanghai for over 11 years and started to work with the Shanghai Symphony Orchestra after graduating from the Shanghai Conservatory of Music. 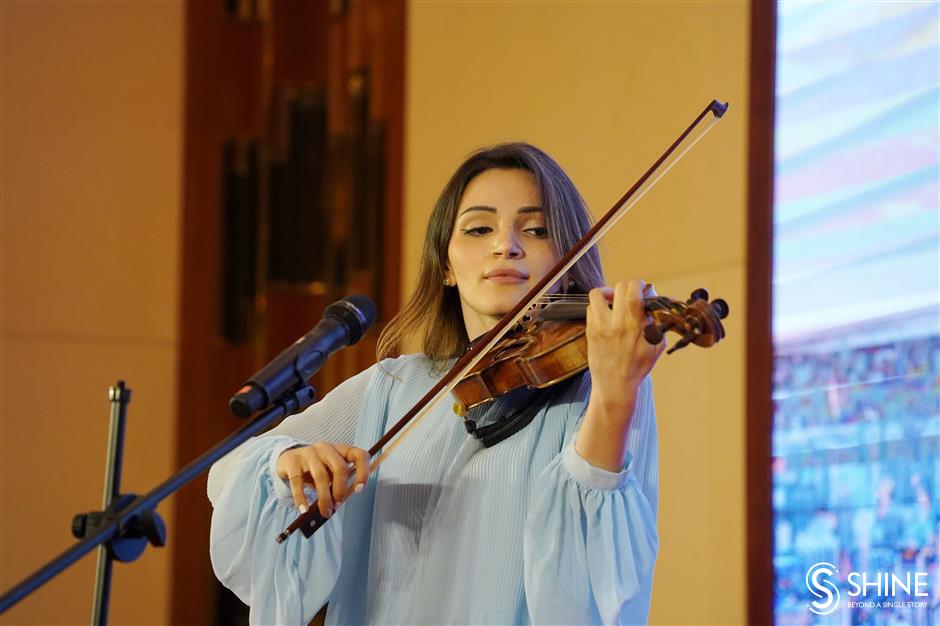 Armenian violinist Astrid Poghosyan, who also works as a part of the management team of the Shanghai Symphony Orchestra, performs at the event.