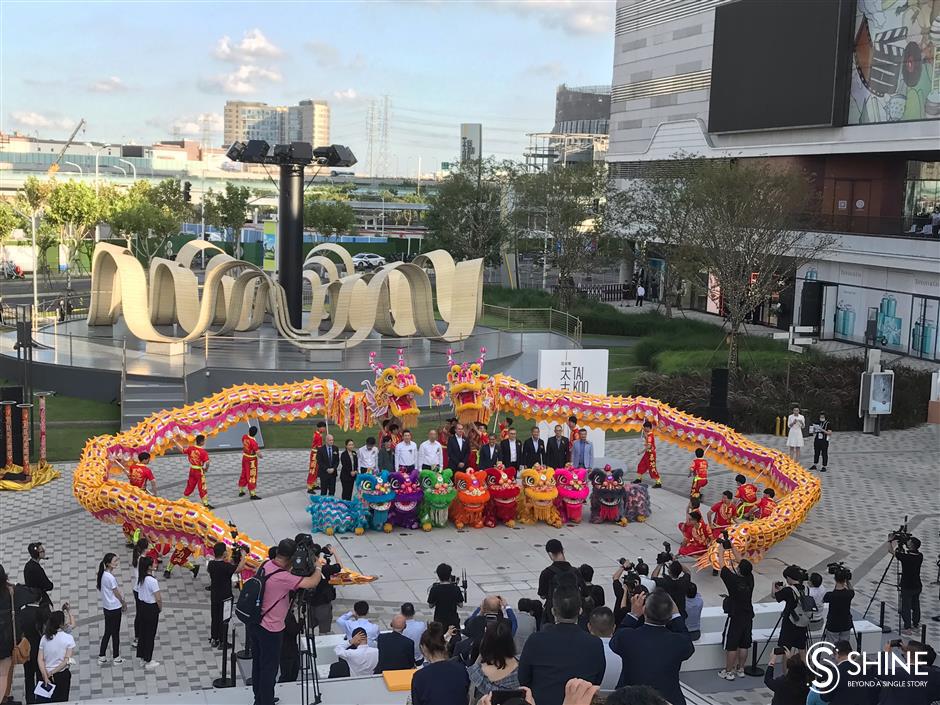 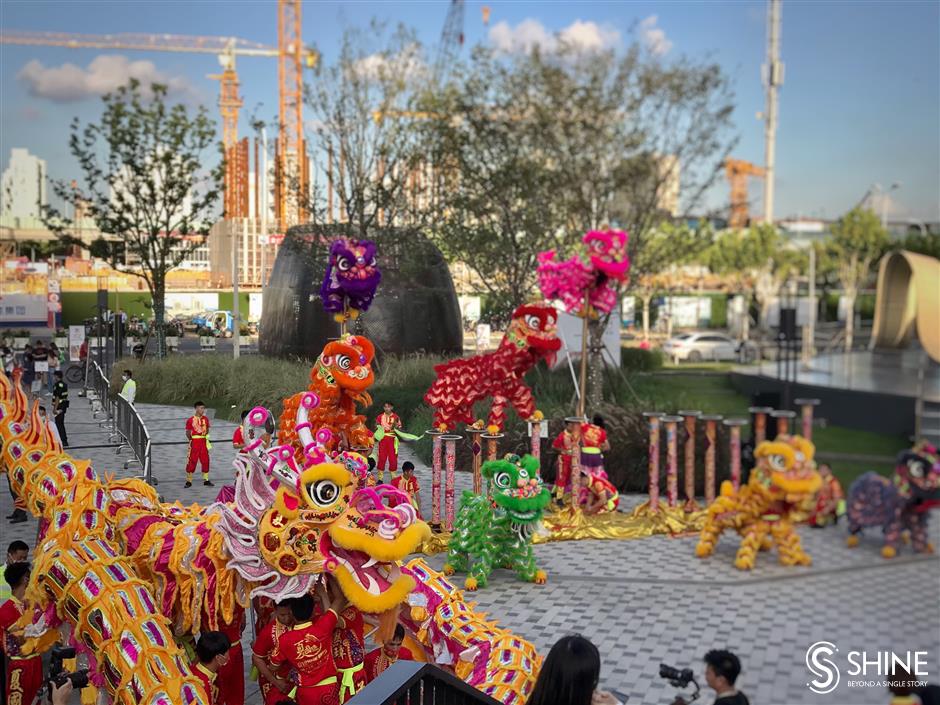 The 50-50 retail complex developed by Swire Properties and Lujiazui Group, the third Taikoo Li project in the Chinese mainland after Beijing and Chengdu, is expected to fuel Pudong's development to become a global consumption hub.

Scenic Bridge, an 80-meter-long pedestrian bridge providing a panoramic view of Huangpu River, links its south wing and north wing, named as stone zone and wooden zone respectively after materials used to pave their facades. In the middle of two buildings, there is an 8,000-square-meter outdoor "Central Park."

It also introduces a wellness-themed experiential shopping concept. Atop its roof on the fourth floor, there is a 450-meter-long "Sky Loop" for people to walk and run. Advanced technologies are embedded to keep track of your movement through facial scanning, making it the first AI track in retail complexes in Shanghai. AI-backed locker rooms and shower rooms are installed along the route. 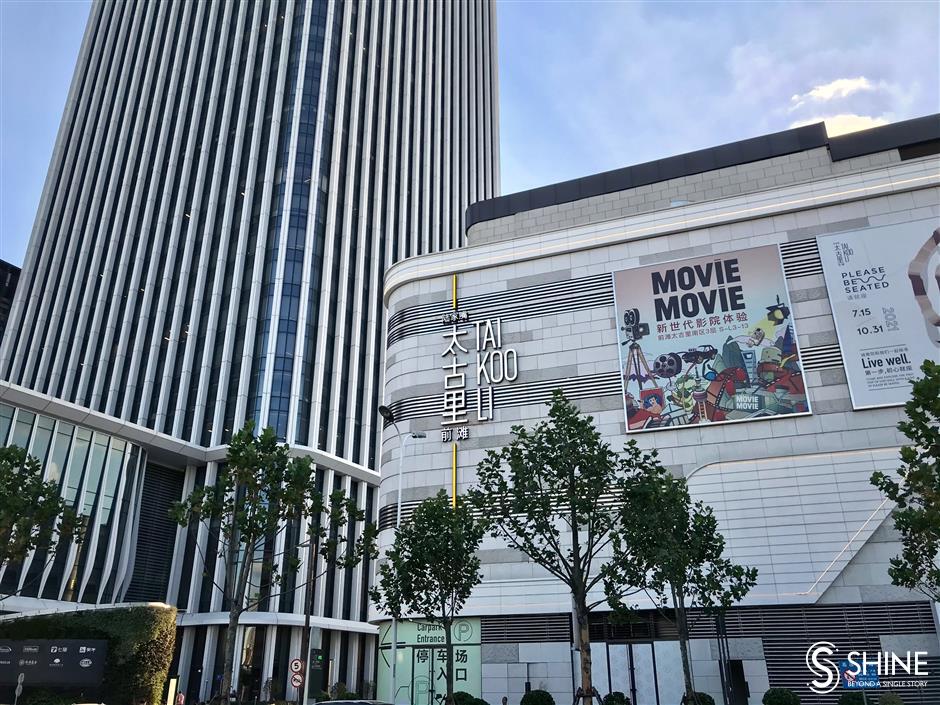 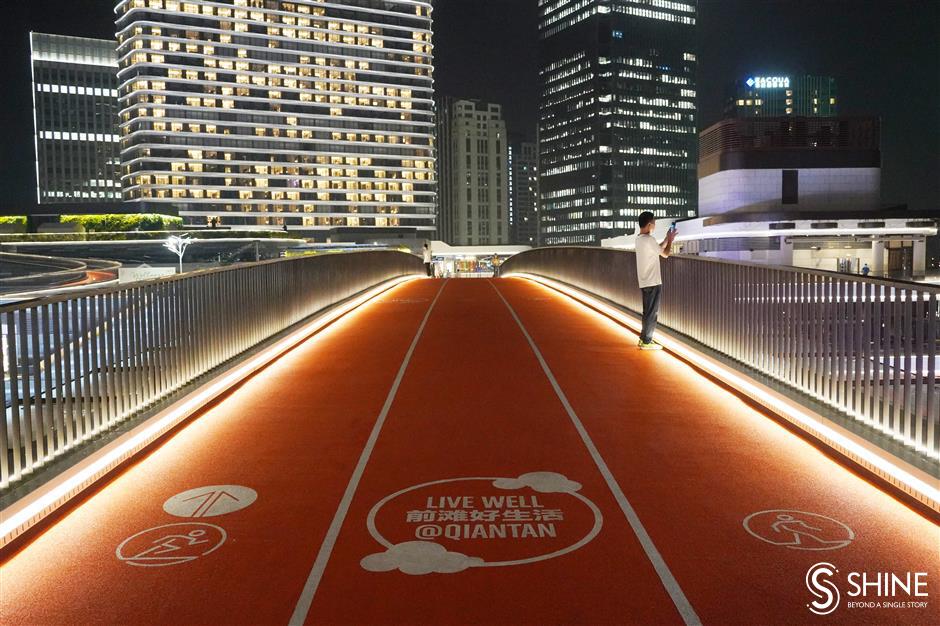 The complex also neatly blends art into design, taking "Please Be Seated" designed by Paul Cocksedge Studio from Britain as an example.

The giant art installation erected in the outdoor square is designed like a rippling wave of wood that rises up to form arches for people to walk through, and curves under to create spaces for people to sit, lie, and relax.

Canadian artist Cinzia Campolese has designed a special light show called "The Journey of Water" set against the backdrop of the art installation. The show made its debut as a highlight of the complex's opening ceremony, as well as its 11-day Wellness Festival lasting to October 10. Over 11 days, a wide range of activities are on offer, such as gardening, urban camping and outdoor movie screening. 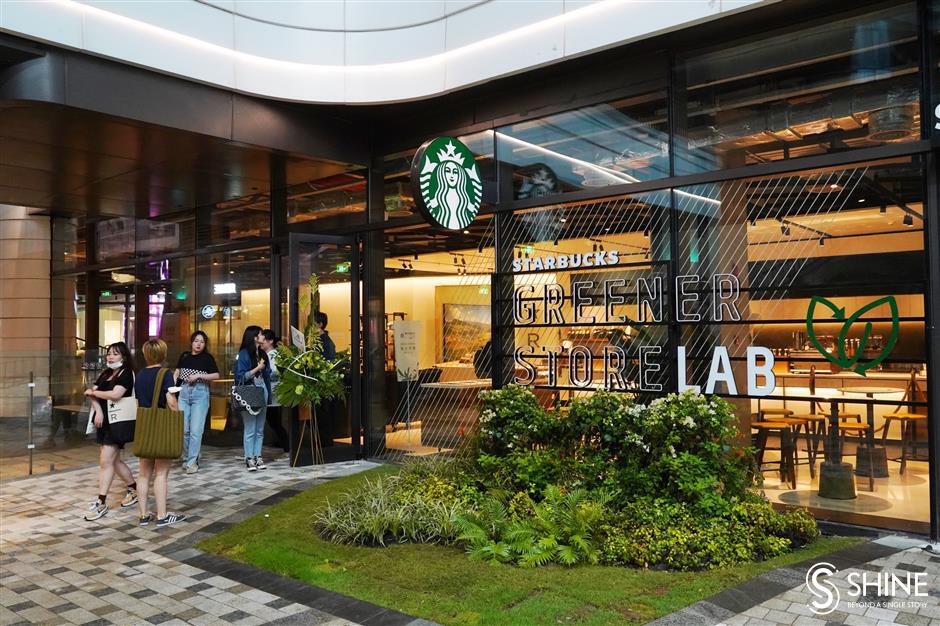 The complex also opens with a diverse mix of more than 250 stores, spanning fashion, dining, entertainment, health and lifestyle, and arts and culture.

It also represents a number of new brands and first stores, such as the first "fusion store" of Hasselblad and DJI, the Chinese mainland debut of Hong Kong-based cultural and lifestyle cinema brand MOViE MOViE, and the first Chinese mainland store of Gonpachi, a popular Japanese izakaya. 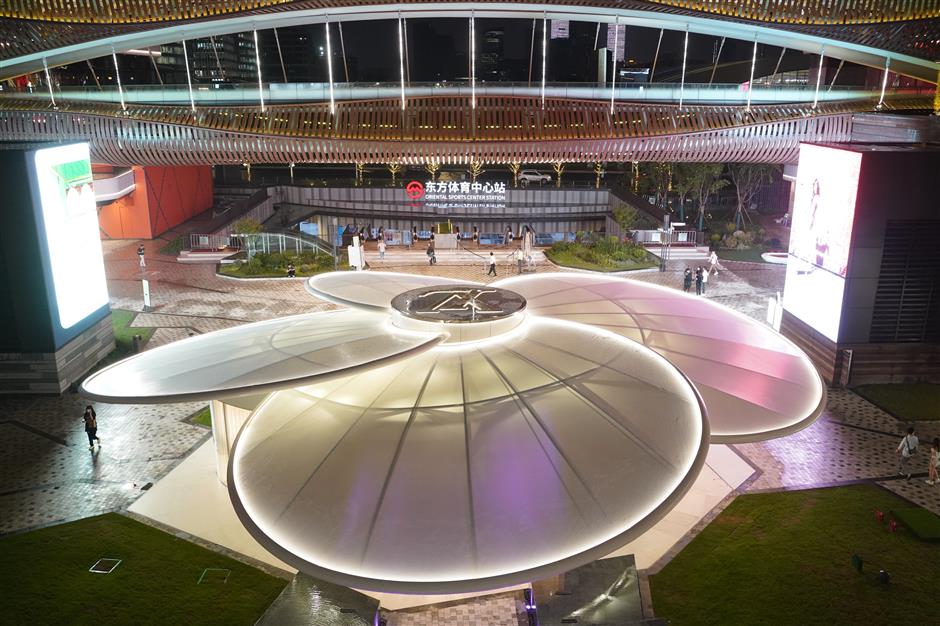 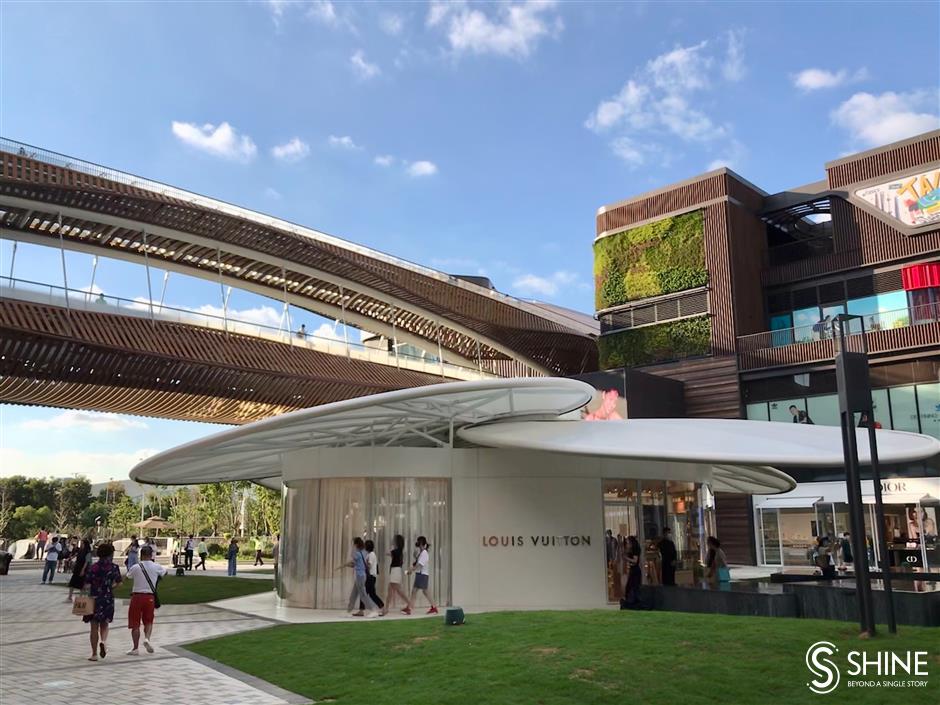 What's more, there are 20 garden-style concept stores designed in unison with the complex's theme of wellness.

Louis Vuitton's newest pop-up store is built in the style of its iconic "Monogram" pattern, very similar to a blooming flower, in a small lawn just below the "Scenic Bridge."

Starbucks opens its first Greener Store Lab, an co-friendly café where wooden installations are made from recycled wood, coffee grounds are used as fertilizer in the outside garden and over half of the store menu is plant-based.

Another highlight is a new 3,000-square-meter Tsutaya Books.

The first "fusion store" of Hasselblad and DJI

An increasing number of brands are making their debut in Pudong. This year, Pudong welcomes four first stores of the world, two first stores in Asia and 43 first stores on the Chinese mainland. They include The Ginza, the makeup store of Christian Louboutin, and the fragrances store of Maison Margiela. 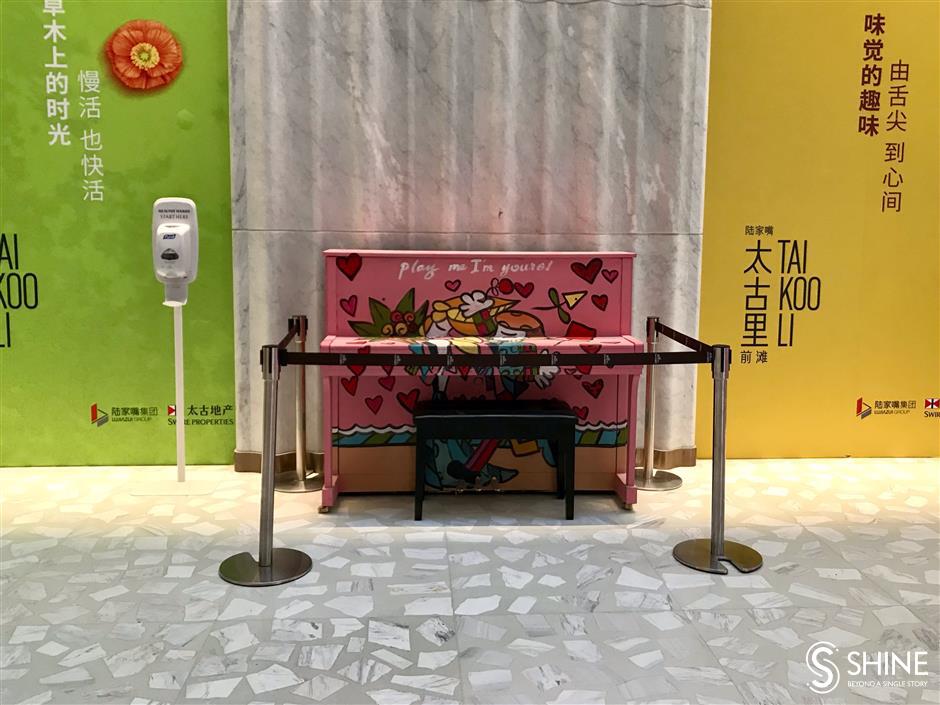 Tim Blackburn, chief executive of Swire Properties, said Shanghai means a lot to the company because it was precisely where it started business about 150 years ago in China.

He believes that Taikoo Li Qiantan, an extraordinary retailing confection of Shanghai style and the essence of Taikoo Li, will be sure to boost Pudong's consumption and Shanghai's global influence.

Xu Erjin, general manager of Lujiazui Group, said Taikoo Li Qiantan will grow to a new business card of Shanghai, and open up a "Qiantan era."

Qiantan takes up 2.83 square kilometers along the Huangpu River. Developed by Lujiazui Group since 2012, 58 percent of the projects have completed construction. Once completed, it hopes to be an icon of the 3.0 version of Shanghai, after the Bund and Lujiazui.

Taikoo Li Qiantan, together with New Bund Center and Shangri-La Hotel Qiantan nearby, form a "life axis" for Qiantan.

The occupancy rate of New Bund Center, a 280-meter-high office building, has reached 83 percent since it was put into use in July 2020. Shangri-La Hotel Qiantan is set to open its doors in October. Unlike its two other locations in Shanghai, it will cater more to families. 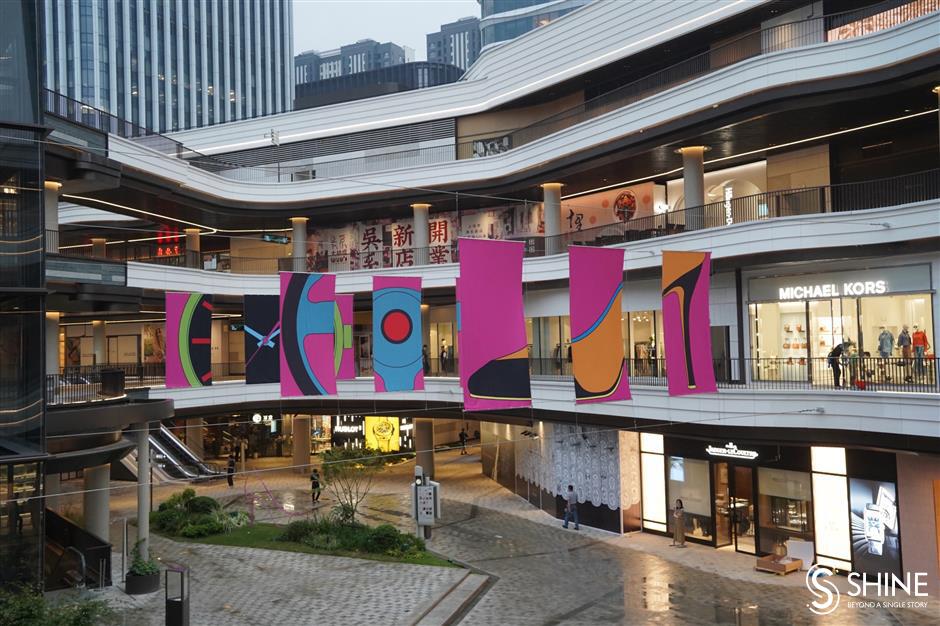