The Pudong New Area has opened five lawns for camping on the Huangpu waterfront to meet increasing demand.

The five sites – from north to south – are located on the lawns of Expo Park, Qiantan Sister City Park, Qiantan Leisure Park and Manlizui Waterfront Greenland, along the Huangpu River.

People are allowed to put up tents from 8am to 6pm every day, except in April, May, October and November, when workers germinate the seeds and maintain the lawns.

The lawns are spread over nearly 15,000 square meters, about the size of two standard soccer fields, according to Ma Zhifei, an official with Pudong's waterfront greenery management department.

Most lawns on Pudong's Huangpu waterfront are view-only facilities, and adjustments will be made for these five lawns to adapt to the change, he said.

Bermuda grass, which is quite durable, very easy to maintain and attractive to the eye, will be planted in spring, summer and autumn. When it turns cold, perennial ryegrass will take its place to create a lush lawn even in winter, Ma added. 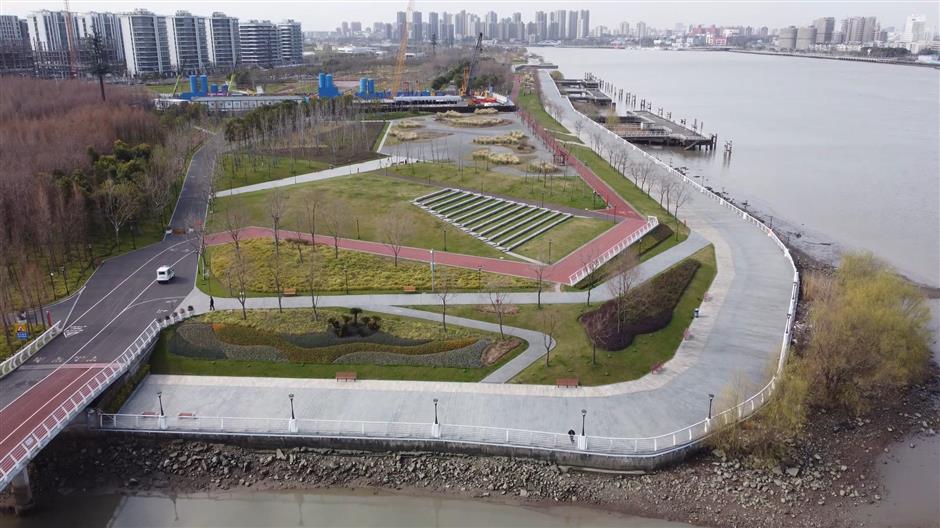 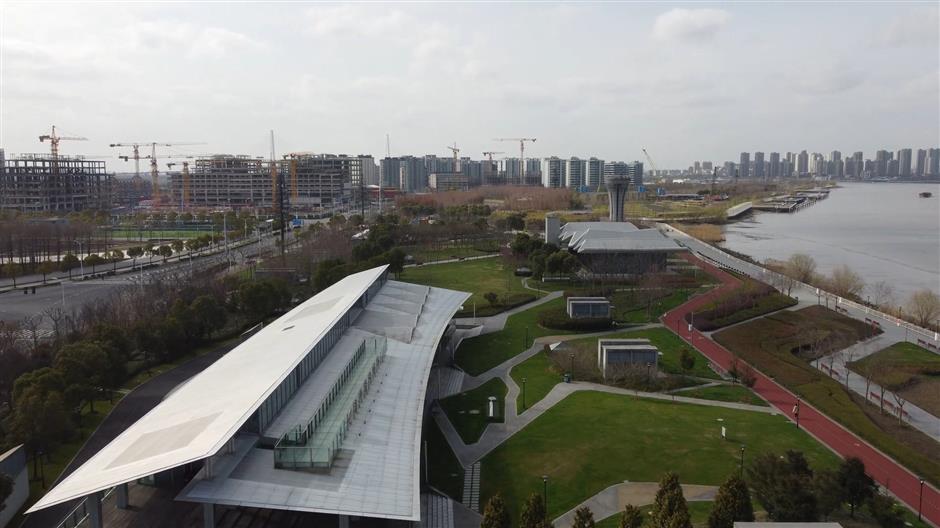 Resort-style urban camping has become a popular option for weekend getaways in cities like Shanghai these days as urban dwellers go green. It offers an opportunity to get closer to nature with easy access, without the need to travel to remote areas with loads of camping gear. And, the novel coronavirus outbreak has fueled its popularity further.

However, urban parks and greenlands almost always say no to campers.

"This is often at odds with environmental protection," Ma said.

"It's common to see people directly hammer tent nails into the grass. These nails are hard to pull out, and usually they are left behind. This destroys the ecology and leaves headaches for maintenance staff."

So, Pudong has come up with the idea of renovating the Yaohua Waterfront Greenland as a tent park, providing 200 camping sites on plank roads – a move that has won praise. 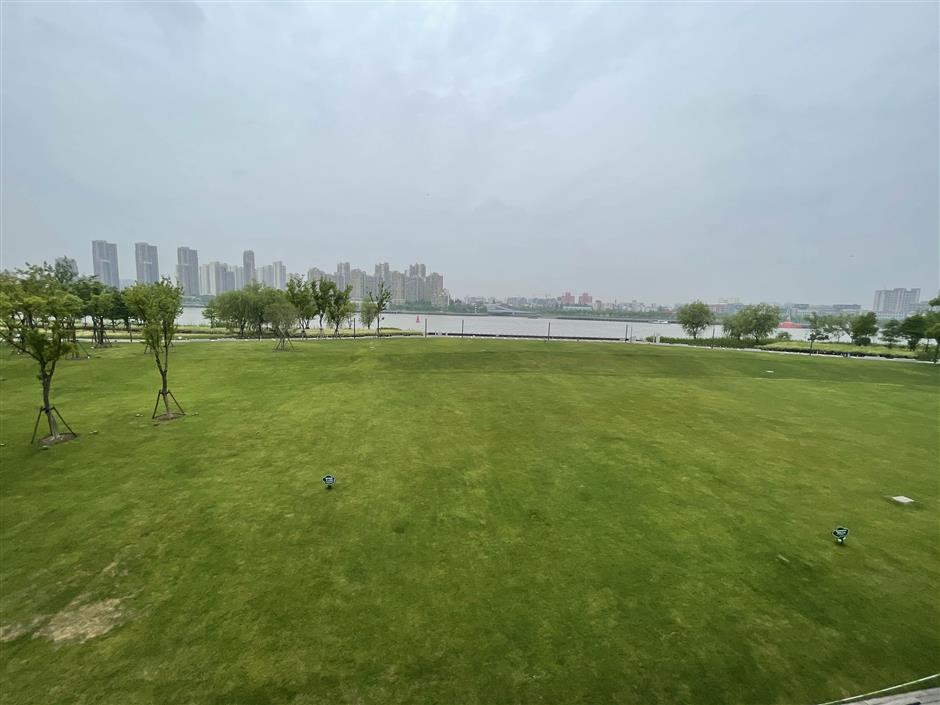 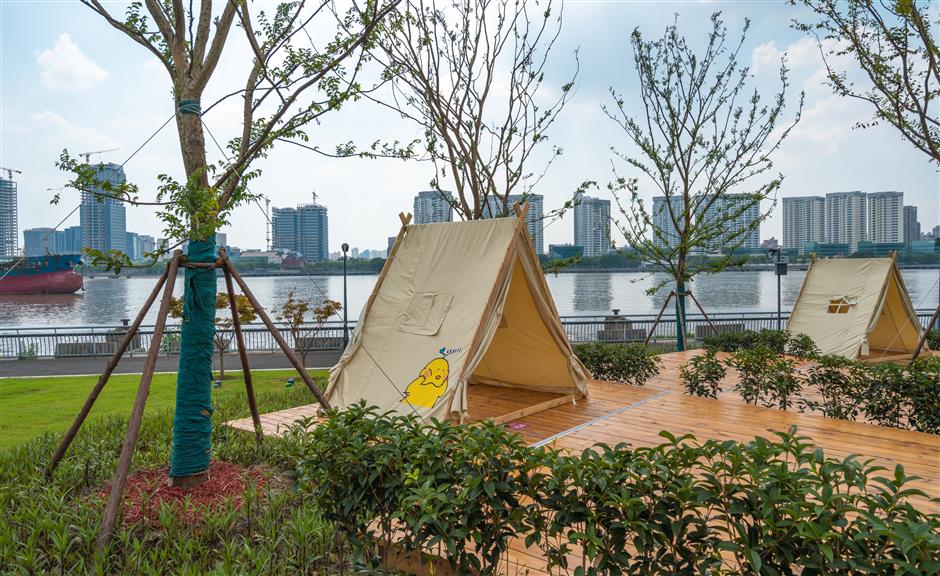 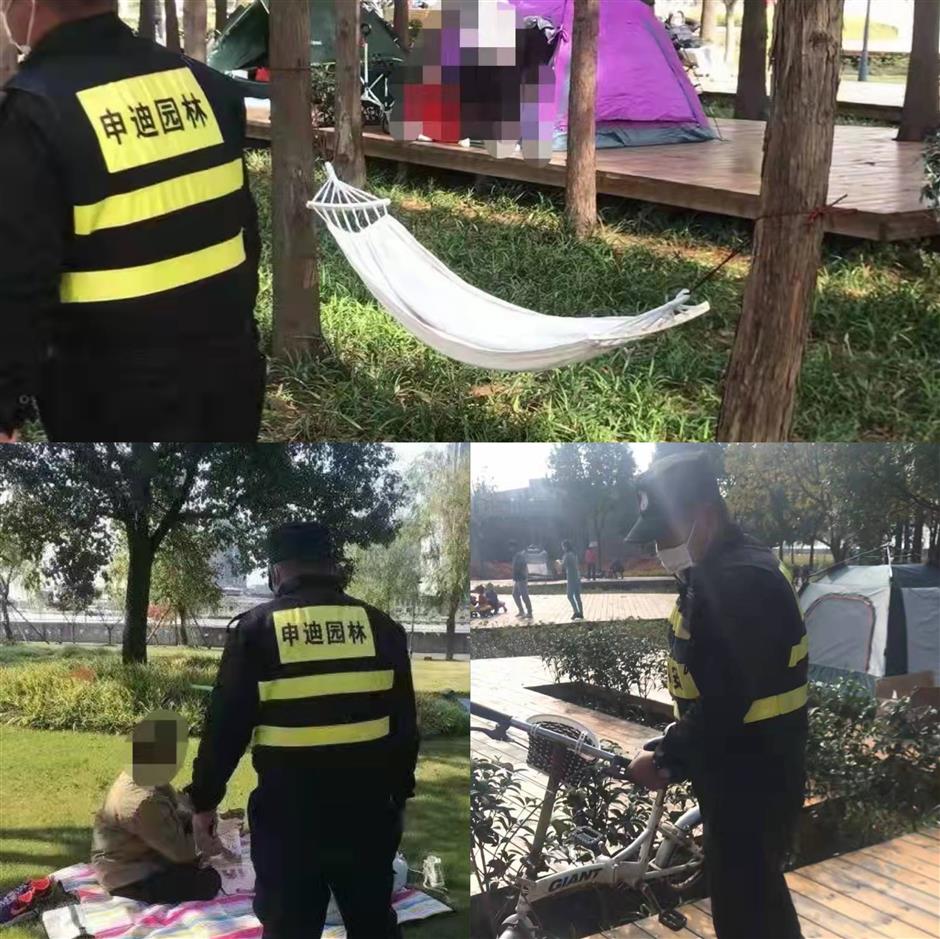 Since its opening in August, the greenland's official WeChat account has attracted more than 36,000 followers and received nearly 8,000 online appointments. But it still falls far short of demand.

There are complaints about how hard it is to get a camping site, plus sporadic incidents of bad behavior, such as anchoring hammocks to the trees, trampling on plants and putting up tents on other people's sites, according to Hua Deng, East Bund project manager from Shanghai Shendi Garden Investment Construction Co.

More waterfront lawns will therefore be thrown open for camping in the near future, Pudong's ecology and environment bureau said while calling on people to strict follow rules and pay attention to the environment. 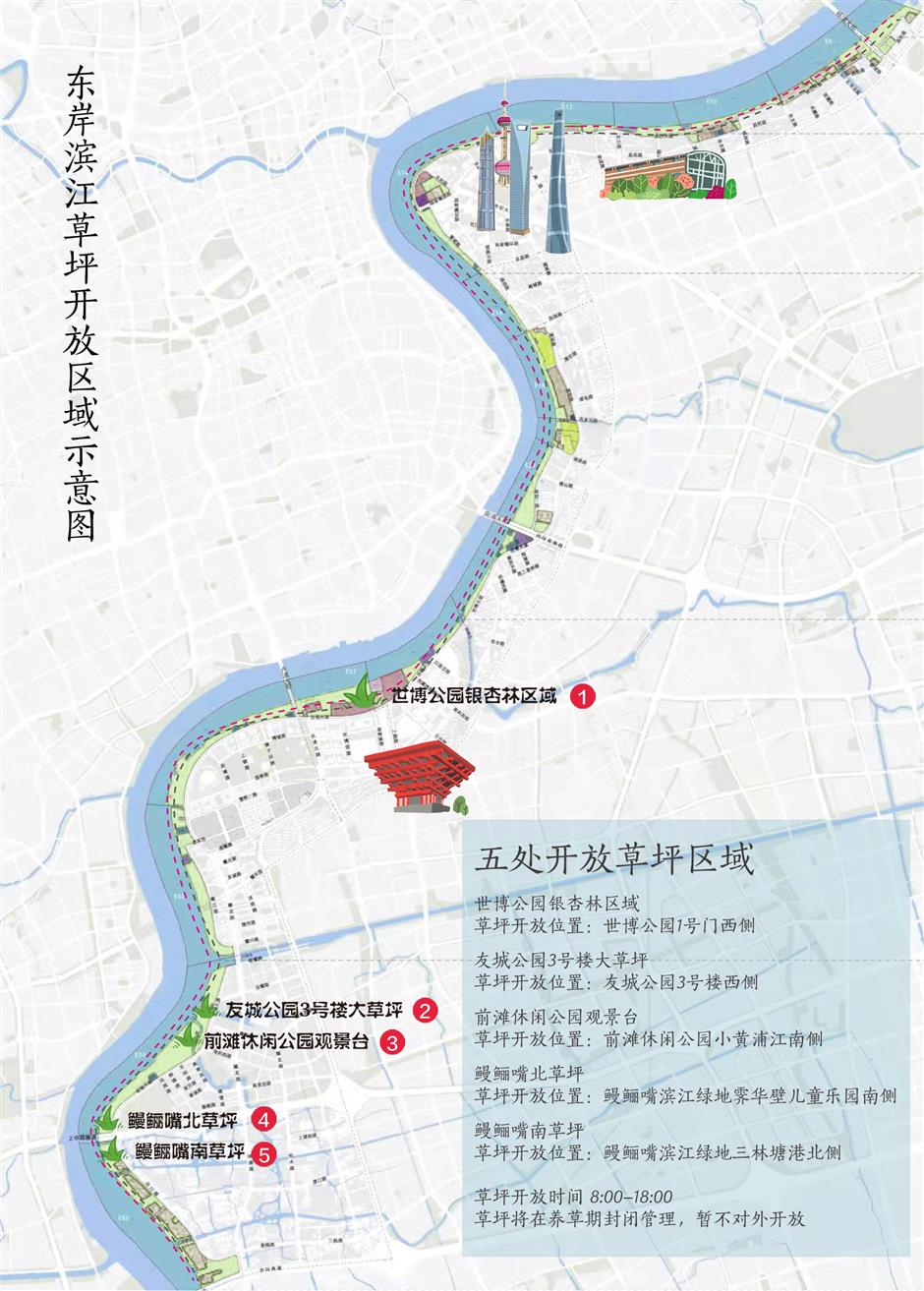 The map of the five lawns 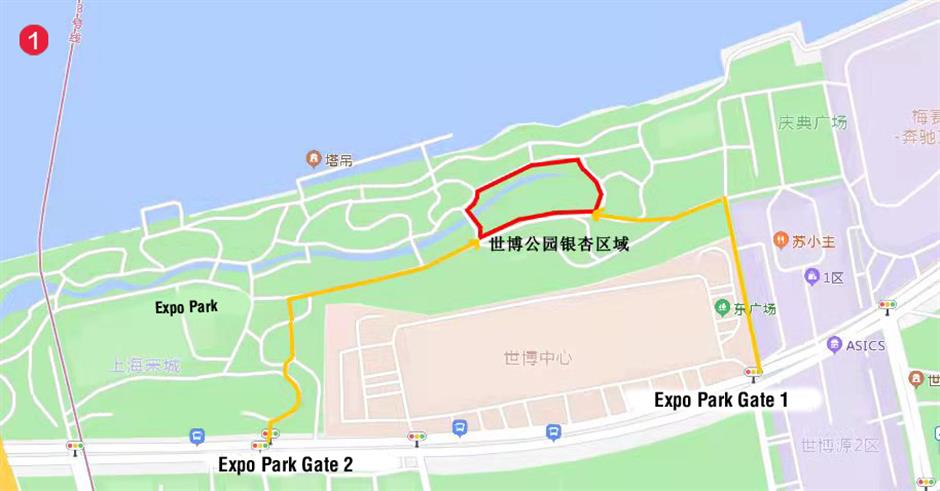 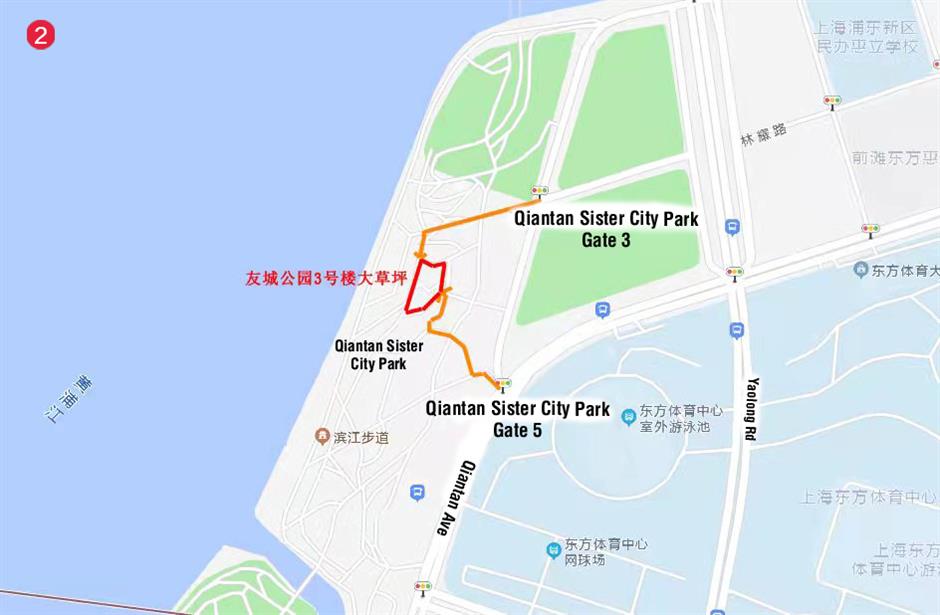 Where to find the five lawns?

2) The lawn on the west side of the No. 3 Building of Qiantan Sister City Park (108 Qiantan Avenue)

4) The lawn on the south side of the Jihuabi Children's Playground of Manlizui Waterfront Greenland (just above the Shangzhong Road Tunnel, northeast to the intersection of East Bund Greenway and Middle Ring Road)

5) The lawn on the north side of the Sanlintang Port of Manlizui Waterfront Greenland (just above the Shangzhong Road Tunnel, northeast to the intersection of East Bund Greenway and Middle Ring Road) 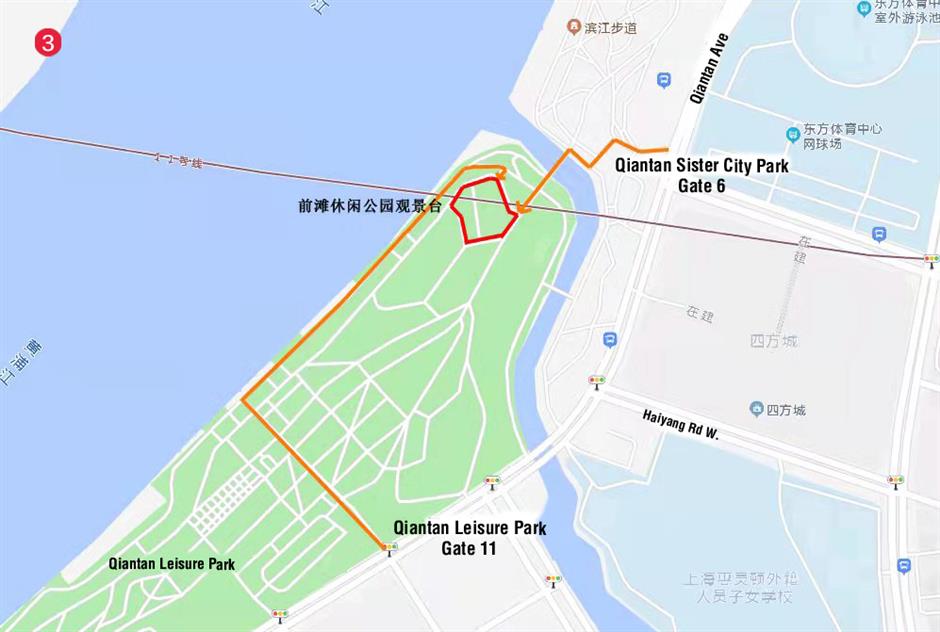 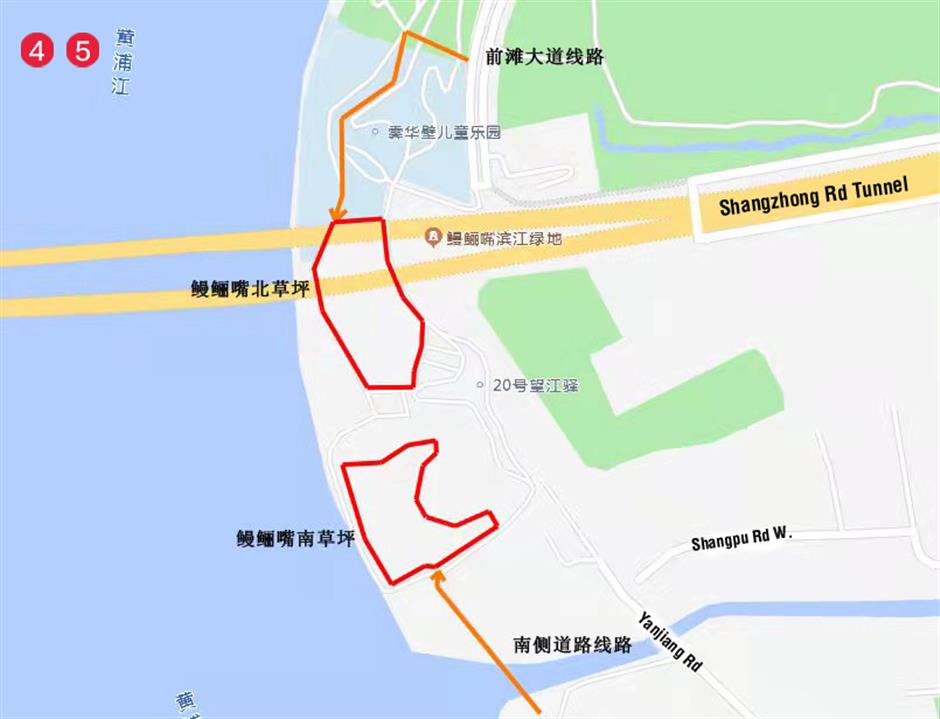