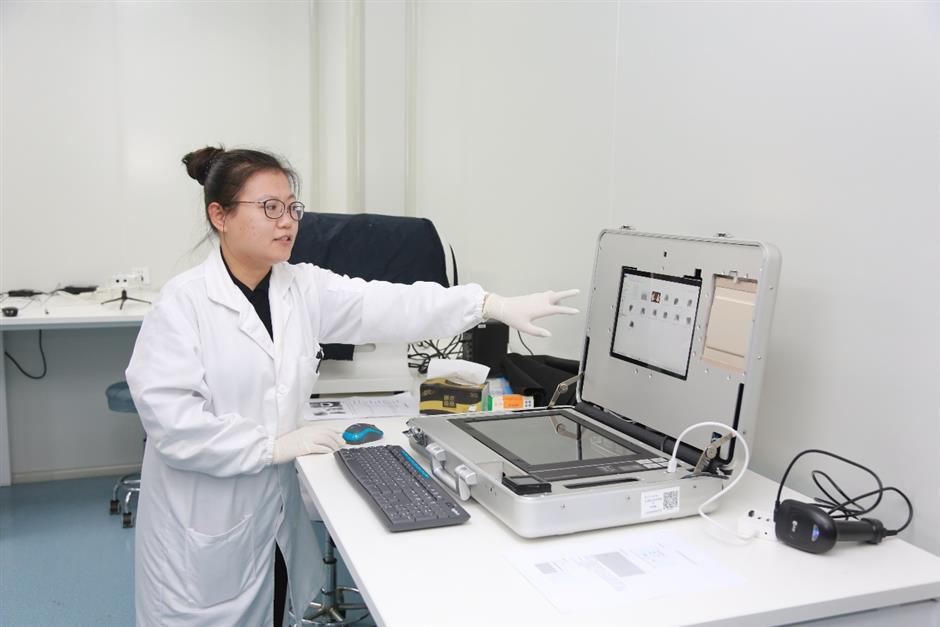 Li Jinxi, a researcher from the international team, demonstrates a system for collecting fingerprint patterns.

A team with researchers from more than 10 institutions from China and abroad have identified genes that play a key role in shaping fingerprints, which may inspire new approaches for the early diagnosis of some congenital diseases.

The findings, published in the latest edition of the journal Cell, were made by researchers from the Chinese Academy of Sciences, Fudan University, University of Edinburgh and other institutions in the United States, India and Australia.

After scanning and analyzing the genomes of more than 23,000 individuals, they identified 43 fingerprint-associated genetic loci in human chromosomes, many of them unreported.

"Those genes were found to be linked with general limb development pathways, instead of skin development pathways as previously thought," said Wang Sijia, a researcher with the Shanghai Institute of Nutrition and Health under Chinese Academy of Sciences and the paper's co-corresponding author.

They also found a variant near gene EVI1 noticeably related to the patterns on a human's middle three fingers, which provides a phenotypic and genetic explanation for the long-recognized "pattern-block" phenomenon featuring the middle three digits with similar patterns.

Previous researches have already found correlations between different patterns and some congenital hereditary diseases, such as higher occurrence of single palmar crease and deep plantar crease among people with Down's Syndrome.

As patterns on fingers begin to develop on the digit tips after the 10th week of gestation, and the configuration of the future fingerprint pattern (arch, loop or whorl) is defined by the 14th week, the researchers believe analyzing fingerprint patterns can be helpful in early screening of some congenital diseases.

Wang said the team is now working with a local hospital to turn their findings into tools for early diagnosis and screening of some congenital diseases.