The "digital twin" concept refers to a virtual platform or model that accurately reflects real-time physical objects and systems.

This means that every element and object in the city can be found in its digital reflection in a digital system.

The city has adopted digital twins in many urban management aspects, such as residential complex management amid COVID-19 epidemic control and governance.

Shanghai Public Security Bureau has applied the digital-twin concept to build an advanced transport system, on which, traffic lights, detailed traffic flows, emergency situations and road problems can be accessed at any time.

The system now is running and supervising the city's entire transport lines. Its digital detectors reach the smallest traffic units, just like the "nerve cells" in the human body.

In the Shanghai Airport Economic Demonstration Zone, traffic jams used to be a headache for local police officers. They solved the problem by using the digital system to evaluate and calculate flow, then coordinated 11 key signal lights in the zone.

About 2,300 accident danger spots citywide have been put under the digital system's monitoring, as well as 3,400 roads near water danger. 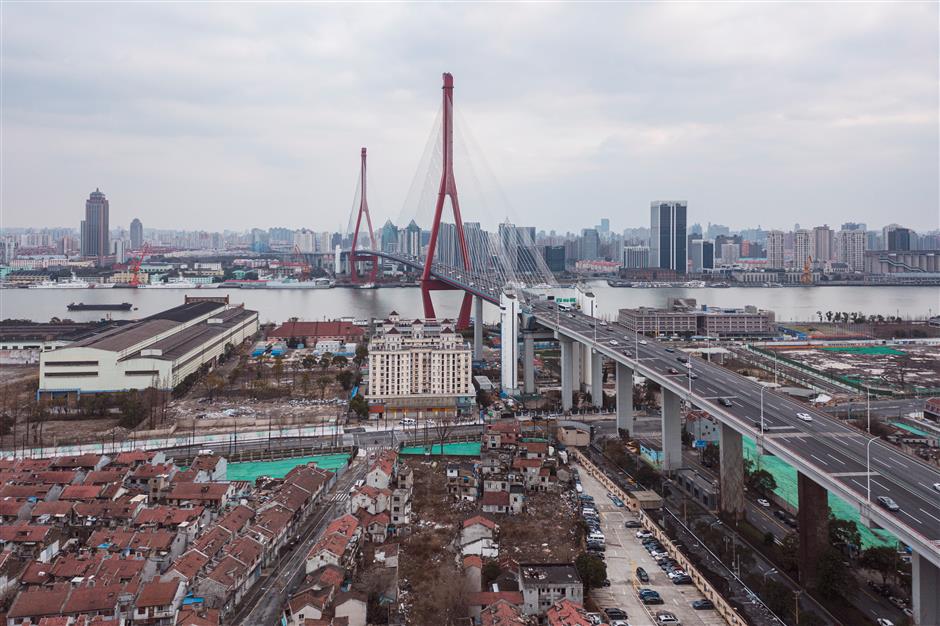 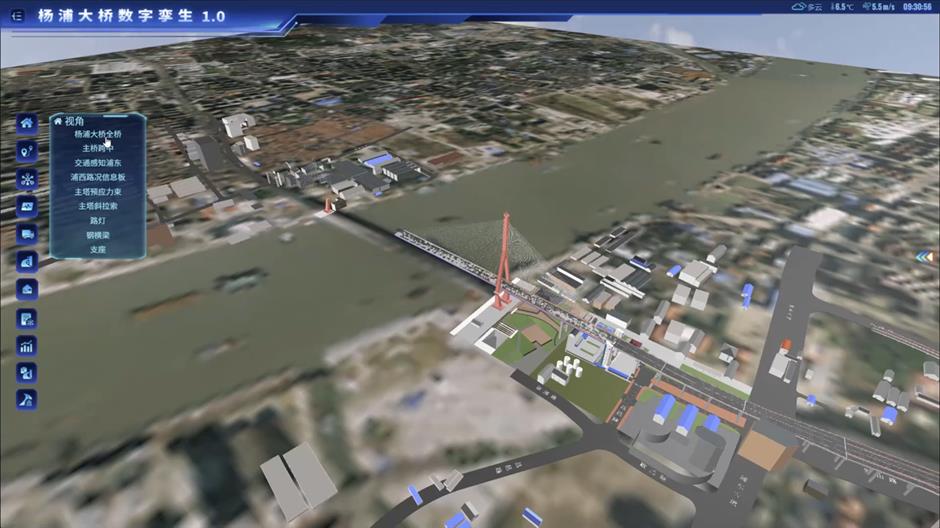 The 28-year-old Yangpu Bridge has a digital twin with a "smart brain", according to the Shanghai Urban Operation and Management Center.

When people cross the bridge in a car, the information will display on a digital system, which also carries a weighing function to detect overloaded vehicles.

Yangpu Bridge is one of the main spans across the Huangpu River, connecting Yangpu District and the Pudong New Area.

The digital twin of the bridge has 50,000 units which are the reflections of the real bridge's construction.

More than 1,100 sensors of 17 different kinds have been installed on the bridge to collect dynamic data, such as wind force, temperature, vibration as well as deformations and displacements.

The bridge has set up more than 120 structural safety indicators which have been automatically matched with the three-dimensional spatial position in its digital twin system.

For example, a longitudinal crack with a length of 2.8 meters and a width of 0.2 centimeter was detected during a daily digital maintenance in January, triggering an alarm. Maintenance workers immediately fixed the issue.

In future, with the help of artificial intelligence technologies, the digital system will quickly and accurately complete a series of operations such as crack location, reporting and review.

The digital Yangpu Bridge is the pilot project of the "Yunluzhongxin," a digital center developed and operated by Shanghai Transportation Commission, which is expected to build the digital twin of the whole city's real transportation system.

The digital reflection of the Shanghai History Museum.

Enjoy a tour in a 'metaverse' of Shanghai History Museum

The Shanghai History Museum has also embraced a digital foreground after it is equipped with the city's first digital twin museum.

People can now take an online tour of the museum as it has adopted the "metaverse" concept to build a digital twin since this February.

The history museum's digital twin not only focuses on providing the online tour service, but also upgrades its digital functions in the real museum, such as a digital tour-guide service via WeChat mini program, a foot traffic monitoring function and emergency response system.

The digital control screen of Tianzifang in downtown Huangpu District.

In downtown Huangpu District, Tianzifang, a renovated shikumen (stone-gate) area, which represents the old Shanghai lifestyle, has been equipped with about 1,000 digital detectors to collect information in response to an emergency situation.

For example, in this January, a fire caused by a short-circuit was detected by the digital sensors before it caused serious damage.

Moreover, the collected information is also used for offering services for the shop owners.

Huangpu District is striving to promote digital urban management to other historic landmarks such as Yuyuan Garden, the Bund and Xintiandi area.

The digital twin of the Nanshi Water Plant.

Located in the city's downtown Huangpu District, the Nanshi Water Plant was the first water plant built by Chinese people in the nation, now it's also the city's first digital water plant.

In the control center of the plant, a digital screen shows a "virtual water plant" which has the same structure, roads and equipment.

Workers can simulate, monitor, diagnose, predict and control the uncertainty of the plant's operation through the real water plant's digital reflection, according to the Chengtou Water Group, which owns and operates the plant.

Also, the digital system records a great amount of production and facility data.

For example, the exact water quantity that the plant produces everyday can be recorded and calculated, precisely. And its production can be adjusted according to the demand automatically.

The digital twin platform can perform statistical analysis of the power consumption of equipment and instruments in the water plant.

For equipment with large power consumption, on the basis of satisfying the water volume and water pressure, the operation mode can be adjusted to minimize the energy consumption and improve efficiency.

Last year the unit electric energy consumption for water production decreased by 4.1 percent, and for water draining by 8.69 percent, according to the data released by the group.

ShanghaiTech University has developed its "digital-twin campus" in recent years, which reflects all the elements and objects of the university.

The campus, loaded with China's first finite element network in 5G standard, SEANet, and forming an information corridor connecting the university's stadium and laboratory building, is the coolest part of its digital transformation.

Also, the digital platform is used to monitor emergency issues and protect the campus from dangers.

The digital campus is developed by the university's technology team, which also designed a smart parking system to solve parking problems in the Zhangjiang High-tech Park, where the university is located.