Lockdown to be lifted on more than 7,000 Shanghai communities and sites 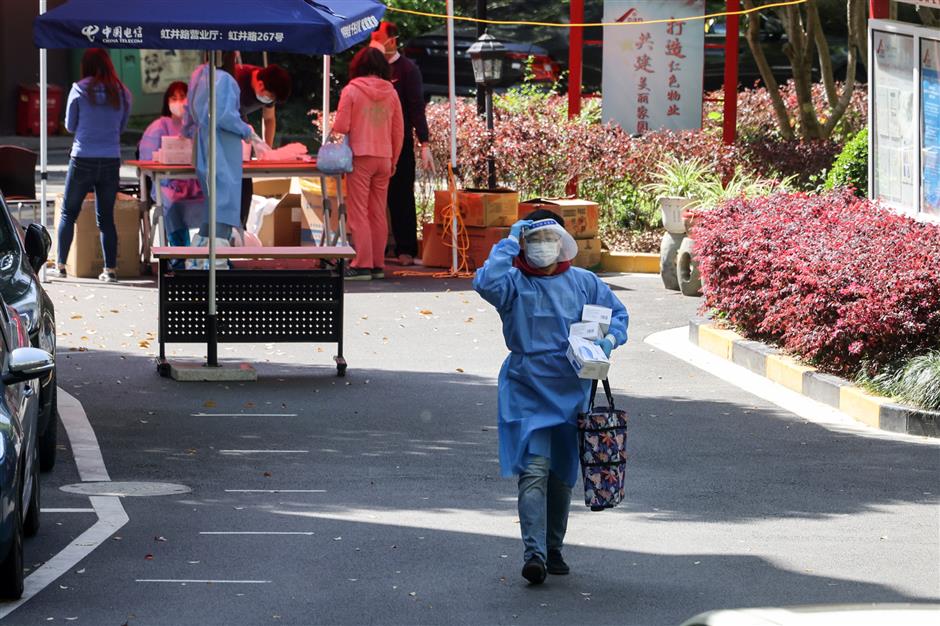 A volunteer delivers antigen self-testing kits to residents in a local community.

Lockdown will be lifted on more than 7,000 communities and sites in Shanghai after reporting zero positive cases in the past two weeks, according to the city government.

Shanghai has announced updated follow-up prevention and control measures, following its extended, phased lockdown that began March 28. Based on the results of previous screenings and risky levels, local areas are classified as either "locked down," "controlled" or "precautionary."

The first group of three-level areas has been determined, said Gu Honghui, deputy secretary general of the city government. A full list will soon be publicized in every district.

They include 7,565 communities, companies and sites that will be designated as precautionary areas – residential communities, villages, companies or sites that have reported no positive COVID-19 cases within the past 14 days. Residents can move around within these subdistricts and towns, but gatherings will be limited. People in these areas are prohibited from traveling to locked-down or controlled areas, Gu said.

Once a positive case is detected, precautionary areas will be downgraded to locked-down areas, where a seven-day lockdown will be implemented and residents are required to stay home.

"Citizens should cooperate and obey the rules to avoid adversely affecting entire communities once infected," Gu said at the city's daily COVID-19 press briefing on Monday.

Though residents in precautionary areas will be allowed to exit their communities, Gu said, they should work from home and avoid going out unless it's necessary. 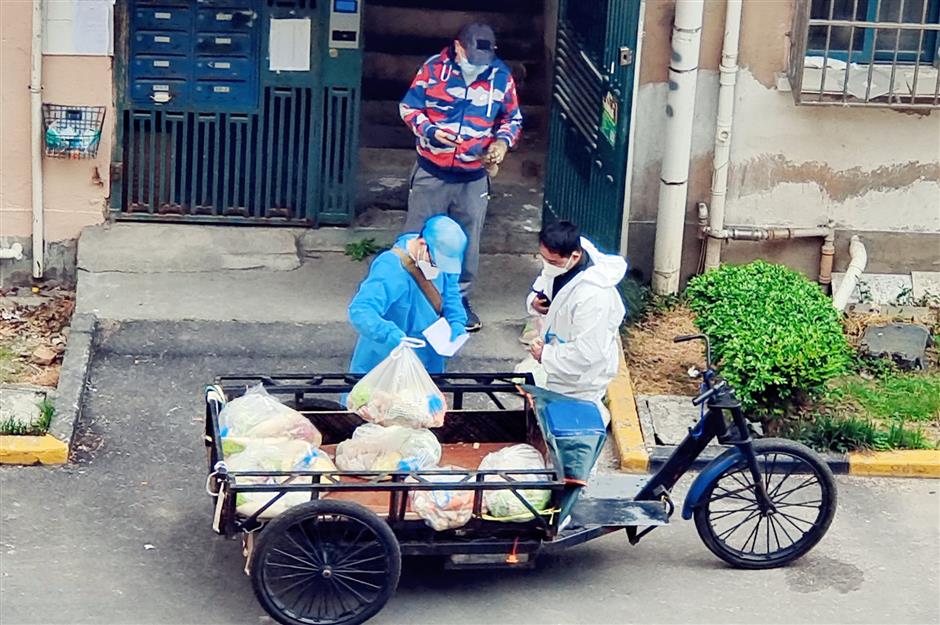 Another 7,624 local residential compounds, villages, companies and sites have been designated as locked-down areas, where positive cases have been reported within the past week.

A seven-day lockdown plus another week of health observation will be imposed on locked-down communities and sites. If no positive case is reported in the next week, residents can walk around within their neighborhoods.

Lockdown will be lifted only after zero positive cases are reported for two weeks and every resident tests negative during a polymerase chain reaction (PCR) test conducted on the 13th day, Gu said.

If any positive cases are detected during the weeklong lockdown, buildings where the new cases live in will be locked down for two weeks, while other residents will have to quarantine in their homes for a week.

Controlled areas will be upgraded to precautionary areas if no positive case is detected during the weeklong health monitoring, and every resident tests negative during a PCR test on the sixth day.

Precautionary residential communities can apply for the title of "Zero-COVID Community." The list of such neighborhoods will be publicized on district-level media, said Jiang Rui, director of the Shanghai Civil Affairs Bureau.

The title will be lifted if any positive case is detected in the community, she added. 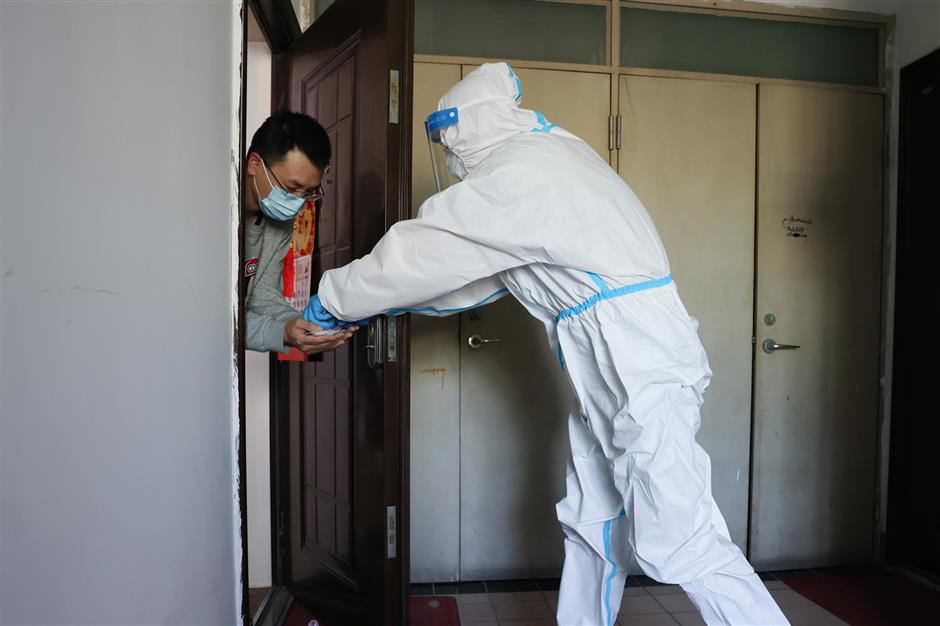 A volunteer gives an antigen self-testing kit to a resident under lockdown.

Gu said the three-level areas will be adjusted based on the ever-fluid situation.

People with medical requirements in locked-down and controlled areas can leave their communities with full self-protection and closed-loop transportation after receiving permission from their communities.

People taking part in COVID-19 prevention and working in industries for city operations, including delivery drivers, security guards, cleaners and food supply staff, can apply to their neighborhood committees for permission to return to work. There must be no positive cases in the previous week in their buildings. They must have work certificates, proof from their employers and a negative PCR test report from within the past 48 hours. They also must undertake another round of antigen self-testing.

Companies are responsible for their employees' health conditions and protection, Gu noted. Deliverymen and other food supply staff must take two tests every day, including an antigen self-test in the mornings and a PCR test in the evenings.

Shanghai has launched another round of citywide PCR testing over the past two days to determine the three-level areas.

A total of 25.12 million people have taken part in the screenings, and tests have been completed for over 85 percent of them, according to Gu.

A total of 25,996 people have tested abnormal and some will undergo retests, Gu said. 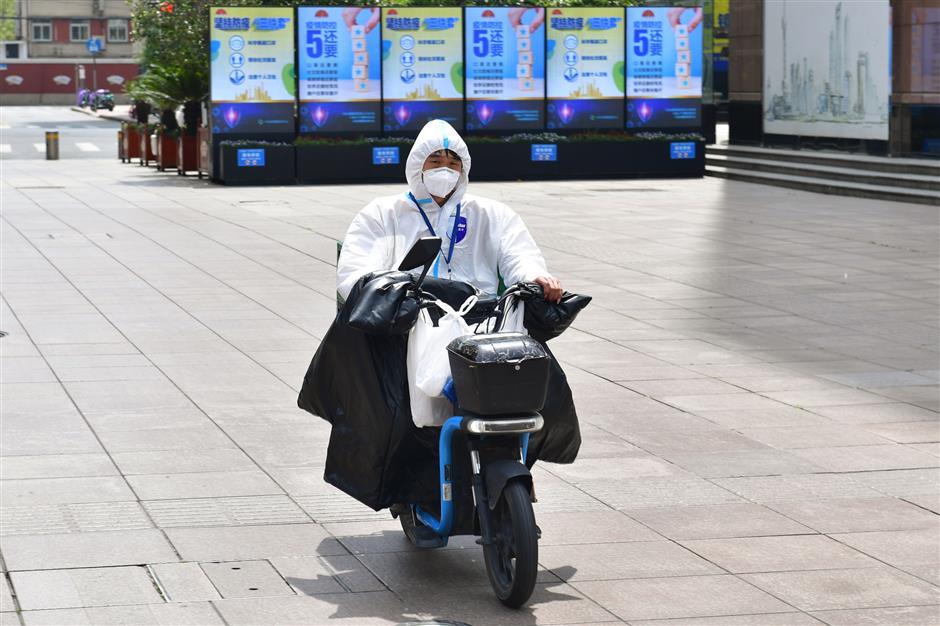 A deliveryman in a hazmat suit