Expats in makeshift hospital can get help from Foreign Affairs staff 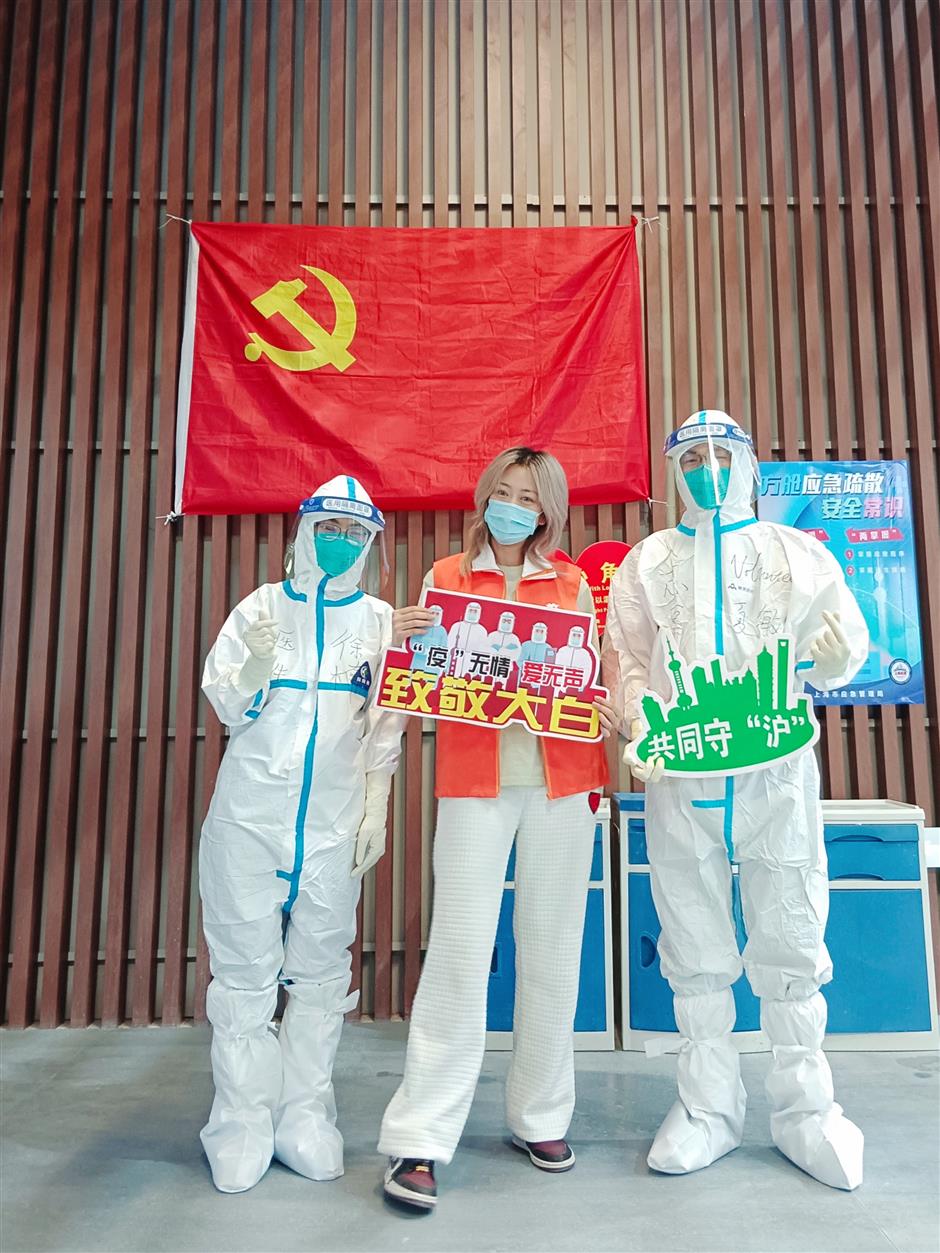 Xia Min, an official with the Shanghai Foreign Affairs Office, with a patient and a doctor at a makeshift hospital in Chongming District

Officials with the Shanghai Foreign Affairs Office are assisting medical staff in serving expatriates with COVID-19 in a makeshift hospital in Chongming District thanks to their language skills.

The makeshift hospital built in the Fuxing Pavilion of the China Flower Expo complex in Chongming has five sections.

Xia Min, 33, who works at the office's visa affairs division, and Fu Yue, 26, from its European and African affairs division, have been serving in two of the sections since late April. Xia can speak English, while Fu can speak both English and Spanish.

According to Xia, they arrived in Chongming on April 20, and spent two days at the headquarter of COVID-19 prevention and control in the district to learn about how the makeshift hospital operates and what they could do to help out.

After that, they began their services in the makeshift hospital.

Their work is not easy. As they have to wear protective suits, they must stop eating one or two hours before entering the makeshift hospital and work there for about six hours. After work, they have to follow strict measures to take off the protective suits and carry out disinfection. It takes them about one hour to go back to their hotels. It means they have no food or water for about nine hours. Xia works almost every day while Fu once every three days.

Their responsibilities cover a wide range, such as registering their information, including their underlying diseases, giving out daily necessities, informing them of the daily schedule in the makeshift hospital and helping with communication when needed.

Behind them, the whole Shanghai Foreign Affairs Office is supporting the makeshift hospital with communication and translation of documents, such as answers to questions frequently asked by patients.

"When in the hospital, both Chinese and expats live together and are subject to same treatment schemes," said Xia. "And we are also serving all of them.

"I think both Chinese and expats were nervous and restless when they were brought to an unfamiliar place and had no idea what will happen next. It may be more difficult for foreigners due to the language barrier. But when they settled down and saw the hard work of medics and volunteers, they became cooperative and grateful."

Fu said one evening, a family of four foreigners arrived but refused to go into the hospital as they heard the environment was terrible.

"We invited the husband to have a look inside and gave blankets to the wife and their two children waiting outside as it was cold that night," she said. "Eventually, they agreed to come in and were very friendly to us throughout their stay. They said 'hello' to us every day and left thankful messages when leaving."

In another case, a mother cried when she found the tooth brushes and toothpaste for her children were collected away as rubbish by a cleaner as she put it on an empty bed when making their own beds.

The officials helped her buy the products for her children immediately.

Some people are easily irritated, especially those who have stayed in the makeshift hospital for a long time and have tested positive again and again.

"I knew one patient spend the whole of April here and was glad to see he could eventually leave," said Xia. "I understand that people are upset here and sometimes speak in an unfriendly tone. But we would not give them up. Instead, we would continue to greet and serve them every day. When they got to know that we are caring for them. They become relaxed." 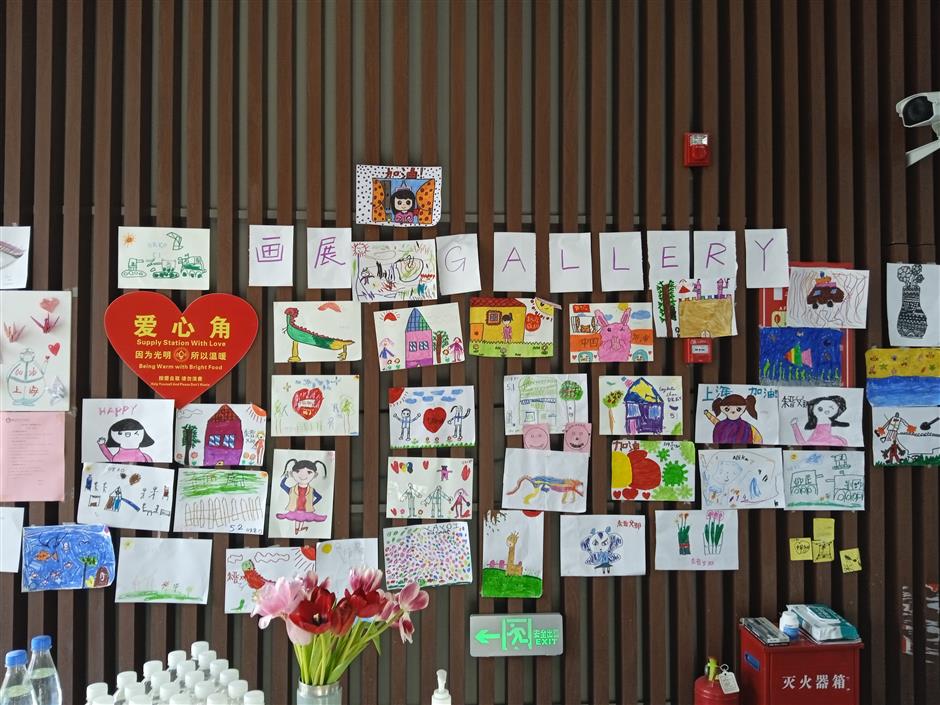 Children's paintings on display at the makeshift hospital

With different backgrounds, patients in the makeshift hospital do have different needs, so the two young officials needed to coordinate with medics and other supportive staff to solve their problems.

Sometimes, foreign consulates in Shanghai would like to deliver some supplies to their citizens in the makeshift hospital, and they would communicate with the patients and related staff to ensure necessary and allowed items were delivered.

"Basically, patients are only allowed to bring along daily necessities, such as clothes, and the medicine they have to take everyday if they have underlying diseases," said Xia. "So I would talk to them and they would choose some allowed items on the list offered by the consulates.

"We then would give the feedback to the consulates and coordinate with related parties to follow the logistics progress and distribute the supplies to the patients after they arrived."

One patient wanted Vitamin C effervescent tablets, but it was difficult to buy at that time and Xia gave him his own.

And also, life is boring in the makeshift hospital as each patient only occupies a bed here and has little entertainment. So some patients would play card games together to kill time but some others may feel they were too noisy.

"When they complained to us, we would go over to remind the players to lower their voices," said Xia.

Medical staff and volunteers are organizing some small activities, such as baduanjin (a traditional Chinese eight-sectioned physical exercise) and ring-toss, to entertain patients, cheering up their moods and exercising their bodies, according to Xia and Fu.

"They would give winners some small gift, such as milk or fruits," said Fu. "These are included in their meals. The extra bonuses are just to make people happy."

Fu is also guiding children in painting. She said she and Xia had thought about what they could do during the service and painting was one of the ideas they came up with. So they brought along some painting materials with them.

One day, when Fu carried some into the hospital, she saw an Indian girl was lying in the bed.

Fu gave her the pens and a painting book and told her she could paint on it and return them to the nurses' station when she finished so that other children can paint later.

"Several hours later, the girl came with her father, showing me a painting of two people in protective suites," she said. "I was really touched to see it. Many nurses were also touched and took photos with them."

When other parents and children saw it, they also joined in painting. Now, there is a painting area for children, including Indians, Americans, Singaporeans and Chinese. Their paintings were put on the wall like an exhibition.

Besides painting, they also practice paper folding and other games.

In fact, touching stories are everywhere.

Fu said there was a corner with food donated by companies such as Bright Food Group. While some people take away what they need, they also leave what they have.

A Malaysian man who was there with his wife and son had asked Fu if he can take some beverage from the desk. Fu said "Yes." He took a bottle of water and later he went back and put some bread on it.

"Almost every day, he would leave something on the desk," said Fu. "Sometimes an orange and sometimes snacks given with meals. When seeing such things, I do feel that everybody is making their own efforts in this fight against the pandemic to make our life better and our work is worth it."

Xia said he saw a young woman from Hong Kong active in voluntary service in the makeshift hospital.

"The second day after her arrival, she became the leader of patient volunteers," he said. "She also invited other patients to join her in dancing and doing exercises."

They are also making friends with patients.

"I'm really touched that many patients have become our friends," said Xia. "They have sent us messages via WeChat and invited us to have a dinner with them after the pandemic is over."

With the pandemic waning in Shanghai, more patients are going out of the makeshift hospital and few are coming now.

"It's a good sign," said Xia. "I think the makeshift hospital will end its mission soon and the medical staff here, who are from the Anhui Province, will also return home. They have been here for more than a month. I know they must miss their families very much. I think everyone here will be grateful toward them for their selfless contributions." 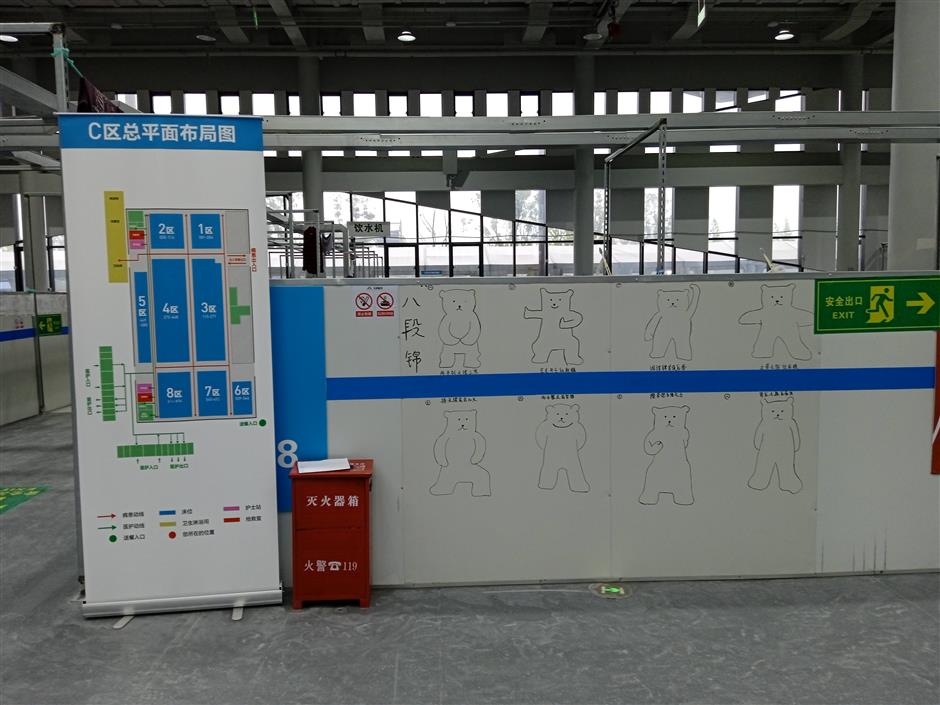 Paintings on a wall instruct patients in how to do baduanjin (a traditional Chinese eight-sectioned physical exercise).

﻿
Special Reports
﻿
61922
,
61924
,
Expats in makeshift hospital can get help from Foreign Affairs staff
From lockdown to wedlock: Shanghai couple defy Covid woes to marry
The buzz around Minhang is that pigs really do fly
Oldest COVID-19 patient discharged after recovery
Location code scanners allow safe use of parks
Half of city-level makeshift hospitals now phased out
COVID-19 in Shanghai: 194 confirmed cases, 1,487 local asymptomatic infections
Live with Andy and Alex: Shanghai in lockdown on May 13
Local fraudsters to do hard time for exploiting surge
Neighbors ensure a memorable birthday amid lockdown
EXPLORE SHINE