What are the CPC congresses and who will attend?

These are the most important events for the CPC at the city and national levels and the following offers a glimpse into the CPC committee congresses.

Q1: What is the CPC congress?

A: A CPC congress takes place once every five years at the national, provincial, city or grassroots level where CPC member representatives review the Party organization's work over the past five years, discuss and come up with agreements on blueprint plans for the next five years and other important issues, and elect a new Party committee with a term of five years.

The Party discipline inspection commission will also submit a work report at the congress and a new discipline watchdog will be elected.

Notably, the first CPC national congress was held in Shanghai in 1921, signaling the official establishment of the Party. The site of the event is in Xintiandi and people can take a look at the history at a memorial there. The first meeting was disrupted by the Kuomintang government and moved hastily to a boat on Nanhu Lake in Jiaxing of neighboring Zhejiang Province.

The ensuing national congresses were held irregularly until 1982, since when it has been organized every five years at the Great Hall of the People in Beijing. 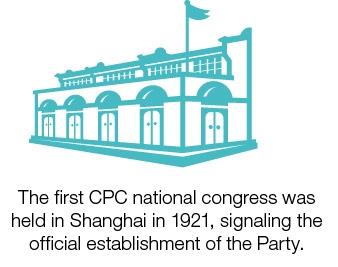 Q2: Who are the attendees?

A: Usually, they are Party members. Lower-level congresses select attendees to the summits at higher levels. Sometimes, non-Communist people are invited to attend the meetings, but they cannot vote or be voted.

Take Shanghai for example: 810 deputies have been elected to represent the city's 2.18 million Party members at the local Party congress and will select representatives to attend the 20th National Congress of the CPC later in Beijing. 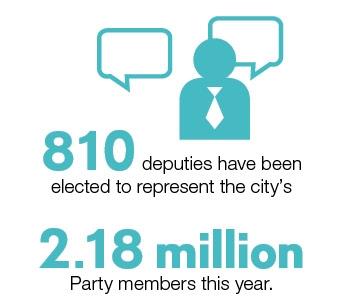 Among the deputies to the Party congress in Shanghai, 321, or 39.6 percent, are front-line workers and 205, or 25.3 percent, are specialized technical personnel. There are 342 females, accounting for 42.2 percent of the total, and 456, or 56.3 percent, of the deputies are aged under 50. Notably, 778 of them have received college or higher education, accounting for 96.1 percent of the total.

In Shanghai, the representatives will hear a work report from the 11th CPC Shanghai Committee. It will include reviews on achievements made in the past five years and proposed goals for the next five years. They will discuss and give advice on modifying the report.

After the congress, the two new committees will hold their first plenary meetings to elect their new leaderships. For the new CPC Shanghai Committee, they will elect members of the standing committee, including the city's Party secretary.

Deputies selected nationwide to attend the national congress in Beijing are expected to hear a report delivered by Xi Jinping, general secretary of the CPC Central Committee.

Q3: Can foreigners attend the meeting?

A: Formal attendees are CPC members, who are Chinese. But if the organizers invite foreigners to sit in, they can be there to hear the work report, but they won't be able to vote or be voted on.

Also, foreigners who have taken Chinese nationality and joined the CPC are also eligible to be elected as deputies to the Party congresses.

Q4: What are the differences between the Party congress and the Two Sessions?

A: The Two Sessions, or Lianghui, are the annual plenary sessions of the legislative and political advisory bodies – the people's congress and the people's political consultative conference. They are also organized at various levels.

The Party congresses focus on issues of the Party while the Two Sessions focus on national affairs. The National People's Congress is China's lawmaking institution while the Chinese People's Political Consultative Conference is an advisory body that monitors government actions and provides suggestions on governance improvements.

Quick facts about the Party congress in Shanghai:

Duties: Select the 12th CPC Shanghai Committee, 12th Shanghai Commission for Discipline Inspection and deputies to attend the 20th National Congress of the CPC in Beijing